Brandon got his driver’s license this week. 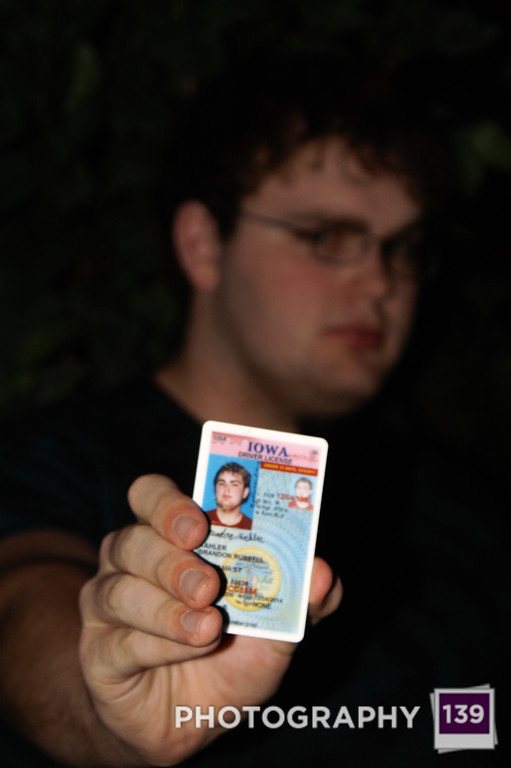 I believe that when you reach a certain age, you are required by social norms to make a few certain cliche jokes when certain events occur.

One such event is when somebody gets their first driver’s license.

An aged person should give out the warning that goes something like this:

“Stay off the streets. Brandon has his driver’s license.”

Then another elder statesman ups the ante with the predictable rejoinder:

“Stay off the sidewalks, too!”

I am allergic to cliches and cheap humor, so I refrained from making any of these jokes. Besides if family history is any indicator, it is only trees that have something to worry about.

On Saturday, after going to the gym, helping Becky move, having lunch at Papa Chubby’s, touring Andree’s new digs but before going to Jeff’s birthday barbecue, I went down to check out Midnight Madness.

On my way from the car to the event, I took these pictures: 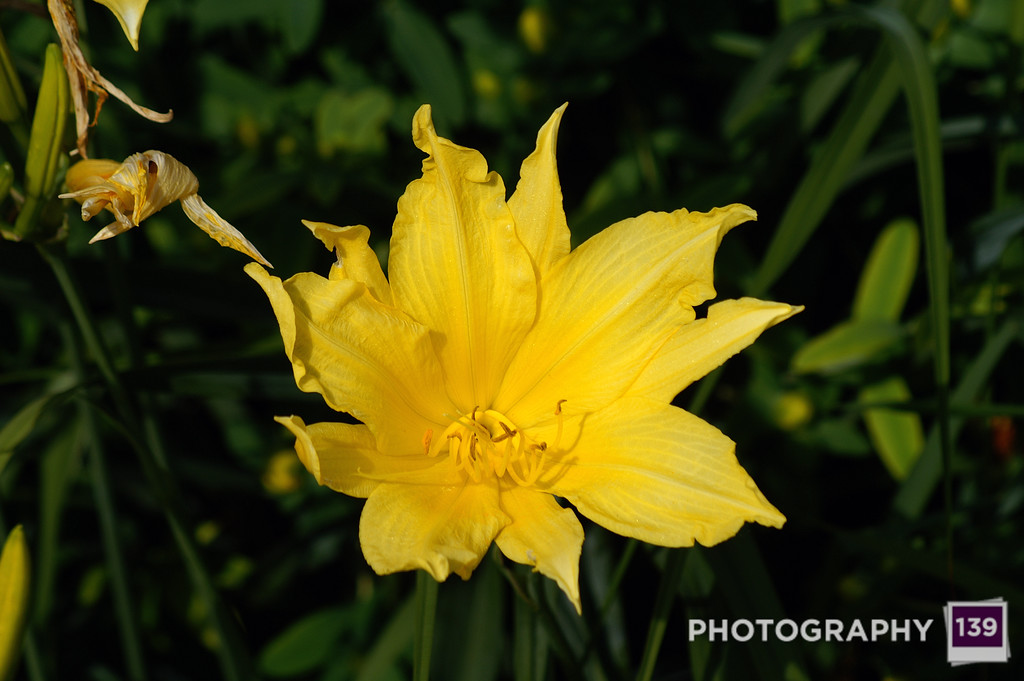 Once I got to where the competitors were congregating, I snapped a couple more pictures.

I believe that Logan was trying to throw down the badass vibe in this picture. It is a family trait of men with Bennett genetic material. 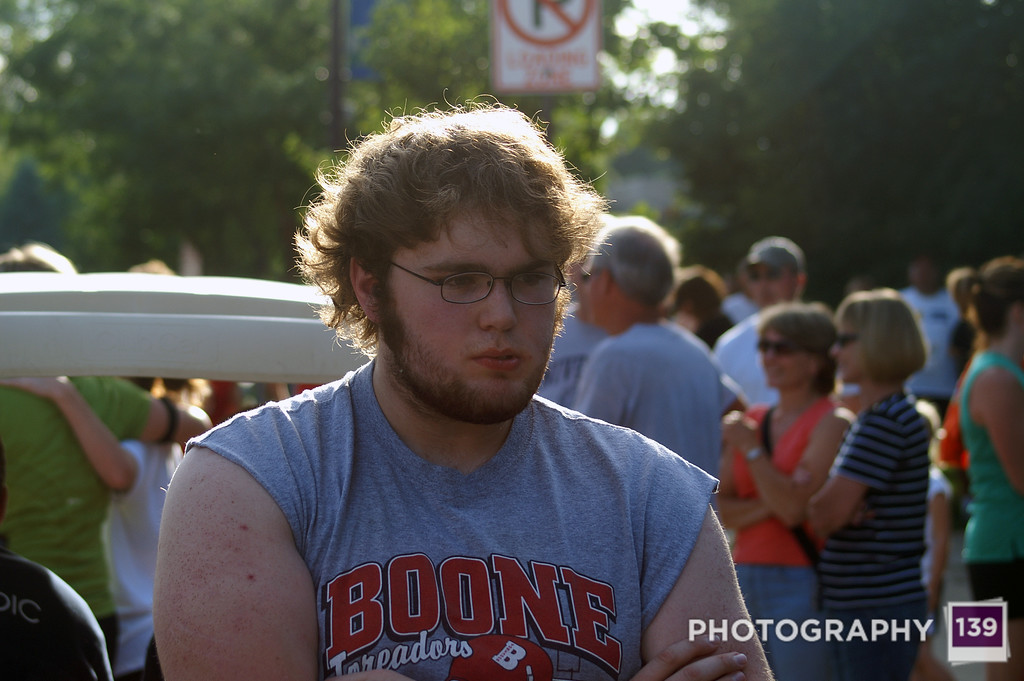 There is no doub about this one. Brandon is definitely throwing down the badass vibe in this picture.

Geri D. showing off her time clock. I made a deal with Geri that if she walked Midnight Madness next year, I would walk it with her. I don’t know if this is a “real” deal or if this is the type of deal I made with Becky last year where she was supposed to hold me accountable for volunteering for Special Olympics. I did not volunteer for Special Olympics.

I’m not going to describe this picture. In fact, there is only one regular reader of this blog that will even understand this picture. I hope they enjoy it.

Once the race got started, Becky joined me and I took a few more pictures of the competitors.

The beginning of the 5K. 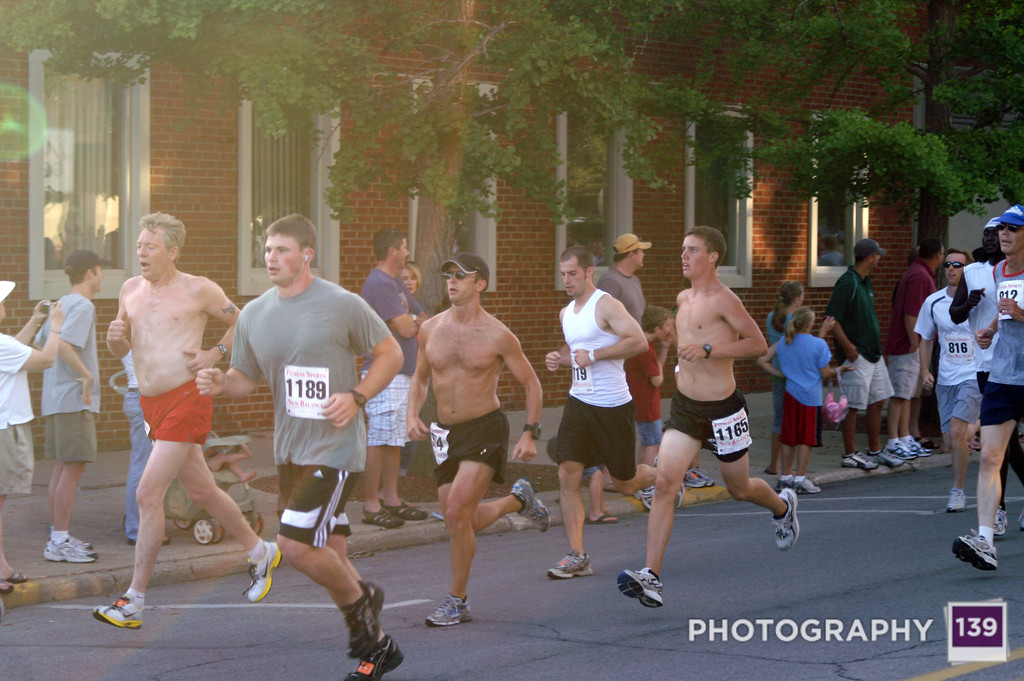 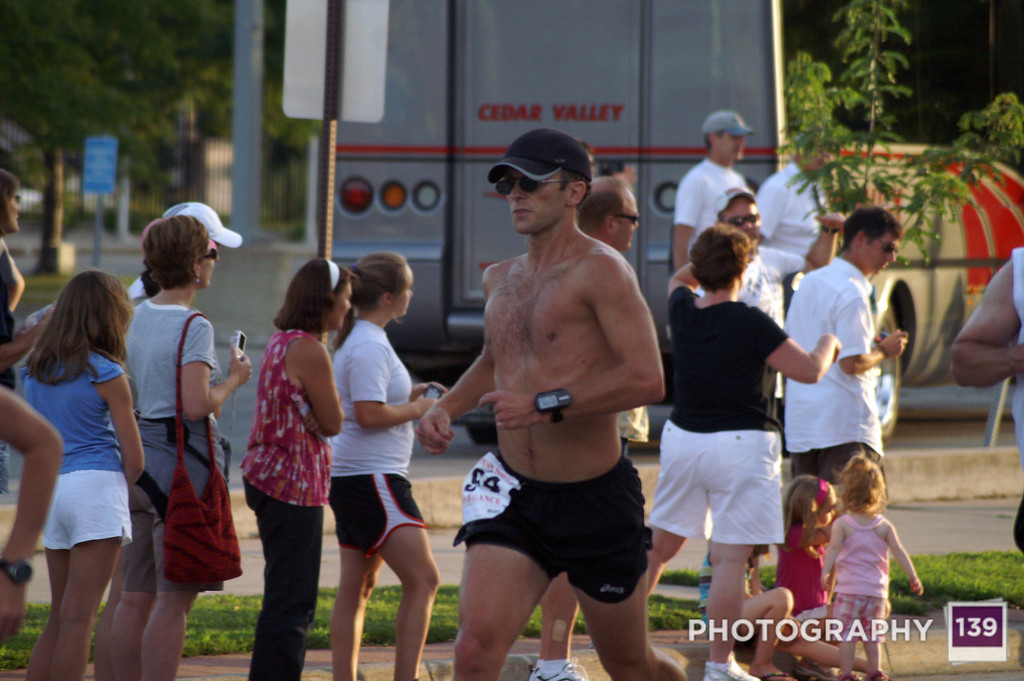 It was an interesting event.

On Mother’s Day, I hosted the first family event at the new house. I learned the following things.

1. My mom, despite literally knowing me my entire life, will takes something out of my fridge and eat it without looking at the expiration date.
2. If you ask Elainie to get mayonnaise out of the fridge, she will tell you that you don’t have mayonnaise, you only have Miracle Whip.
3. If I have popped a blister and am bleeding from my foot, I can talk Alexis into taking, not 1, but 2 pictures of my bloody foot.

Here are a couple of pictures from Mother’s Day. I will spare you the blood foot picture, unless you explicitly email me at bennett@photography139.com requesting the picture. 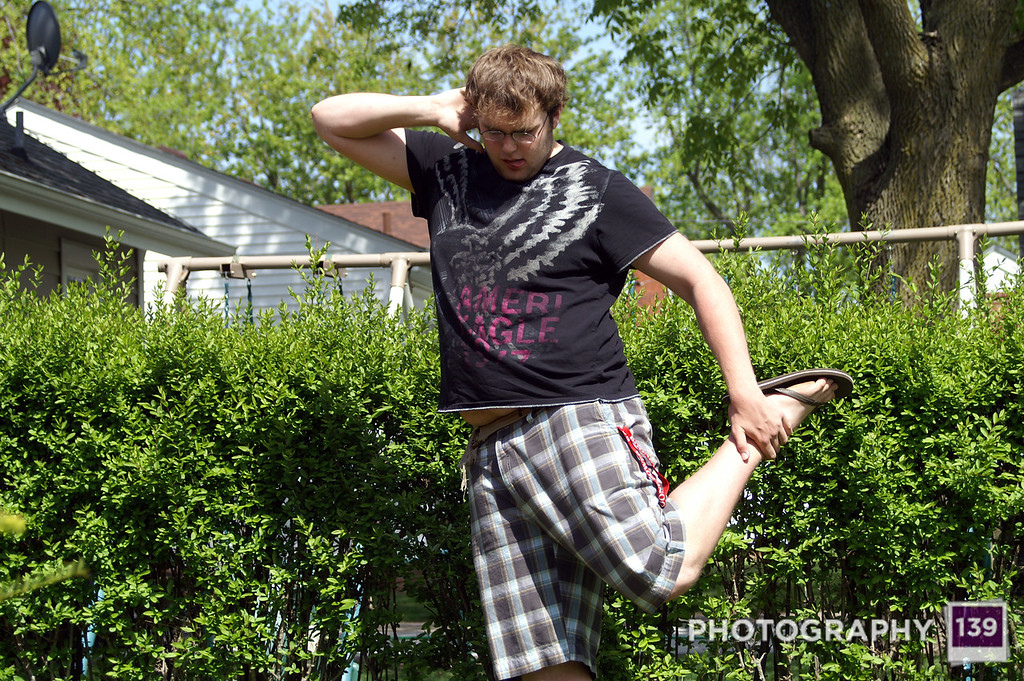 There are about 30 other Mother’s Day pictures in the Family Photo Album. Just click on the link below:

I started Thanksgiving by helping serve the free Thanksgiving dinner with my Mom, Teresa and Logan. I was given the extremely important duty of collecting trays.

After my shift concluded I talked dogs with Karma’s former vet Jordan and his family. Even though I know when I get a dog again it will be a Golden Retriever, I was told by one of Jordan’s daughters to look into Bulgarian Mountain Dogs.

I really had no intention of doing this, but I was told (incorrectly) that I would be a hypocrite if I didn’t do such a thing.

So enjoy this little tidbit from Wikipedia about Bulgarian Mountain Dogs (AKA Caucasian Shepherd Dog):

Powerful and massive, the Caucasian Ovcharka can be a difficult breed for an inexperienced owner, because it respects and obeys only those that it deems superior to itself. They are good with children, but will not see them as their masters. The dog develops a strong bond with its owner but will rarely be submissive; this is truly a thinking dog which relies on its own instincts, sometimes even disregarding its master’s directions. A breed with a very quick reaction time and fast protection reflexes, it has even been unfairly described by some as somewhat of a “loose cannon”. With proper care, handling and training, this is a well-behaved and obedient family companion.

I have no doubt that such a dog would see me as being superior, but Golden Retrievers are where it is at.

I concluded my Thanksgiving by eating a wonderful dinner and dominating my family in Rack Rummy.

Here are some pictures from the day.

If you break it down, I had 6 Thanksgiving to attend this week. That is a lot of good and unhealthy eating.

Here are a couple of special effect pictures of Brandon and a frame.

I would be remiss if I didn’t point out that Brandon is wearing the tie I wore in Jen and Derrick’s wedding this summer.

This is a collection of a few of the color images from Day 1 of Brandon’s Senior Photo Shoot.

These probably aren’t the best pictures from the day, but they are some of my favorites.

Perhaps this is more a collection of goofy looks on his face, but they are my favorite goofy looks.

Iowa State’s entrance video is pretty cool. It shows intersplices action from this season with footage of many of the greatest Cyclones in history. The song that plays over the action is Saliva’s Ladies and Gentlemen. The opening lyrics of the song describe the Cyclone season, but not in the way that was intended:

Ladies and gentlemen please
Would you bring your attention to me?
For a feast for your eyes to see
An explosion of catastrophe

The song goes on…

At least I can say that my eyes have yet to bleed, but there is still the Missouri game left. 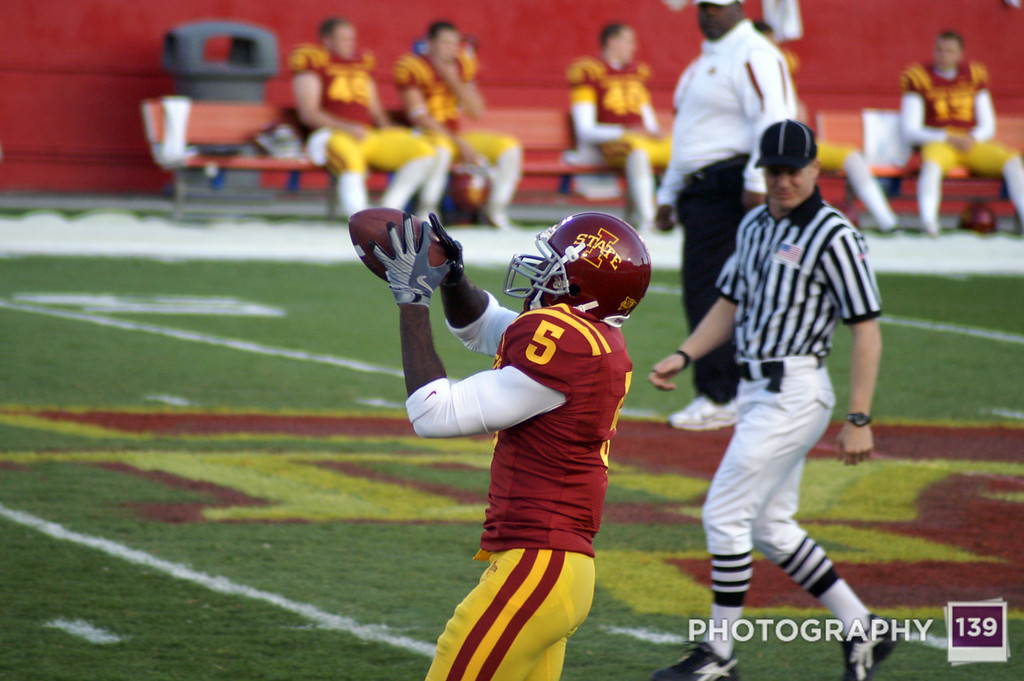 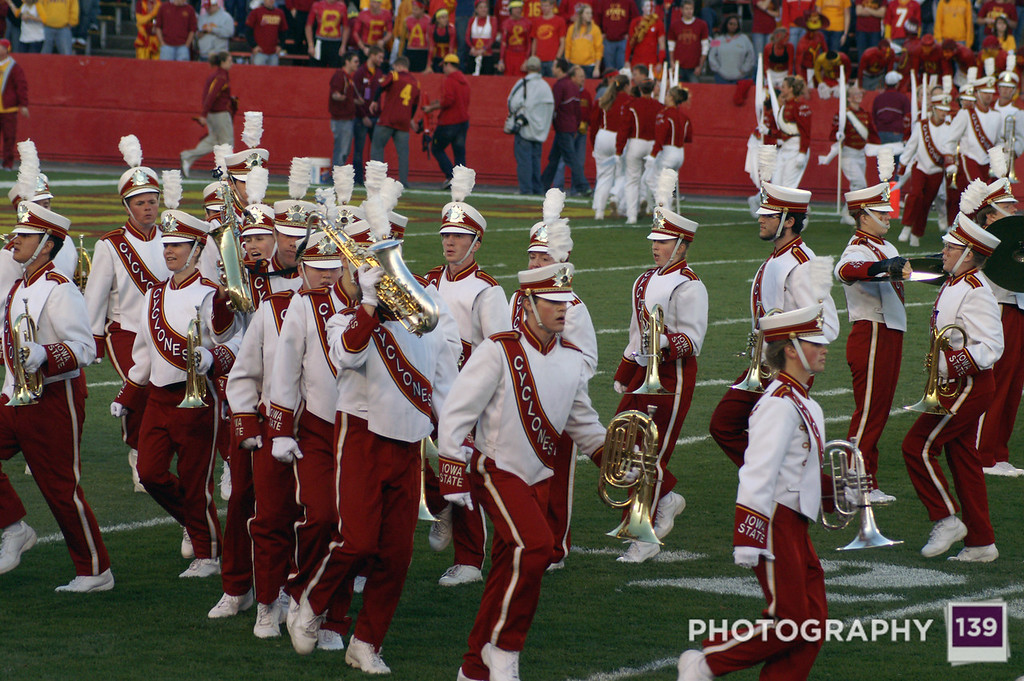 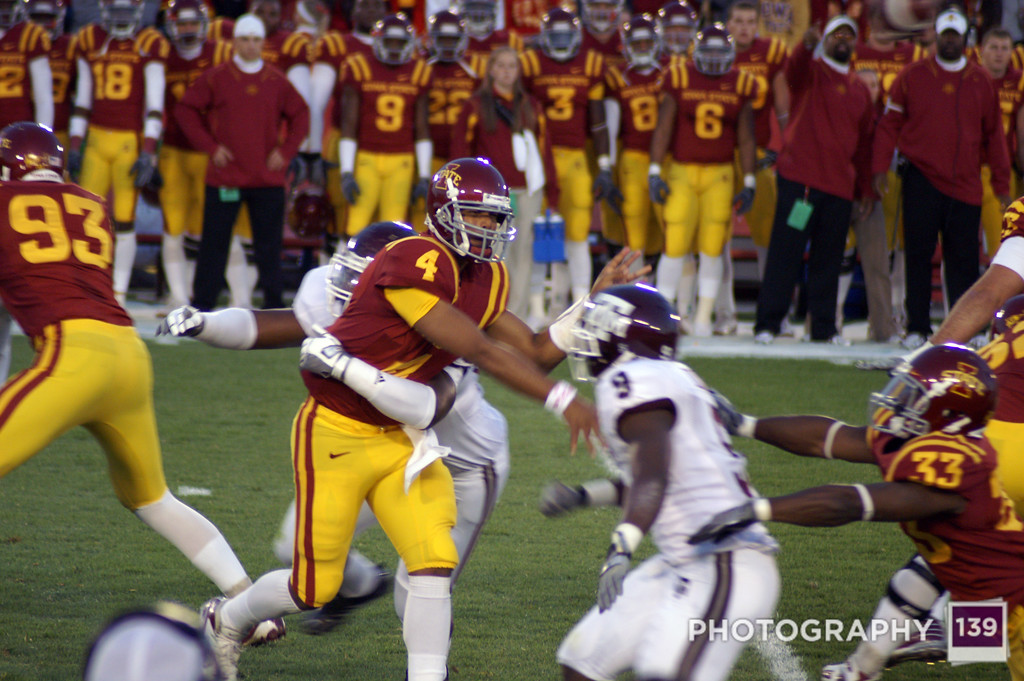 Right before this picture, #44 puked on the sidelines about 5 or 6 times. 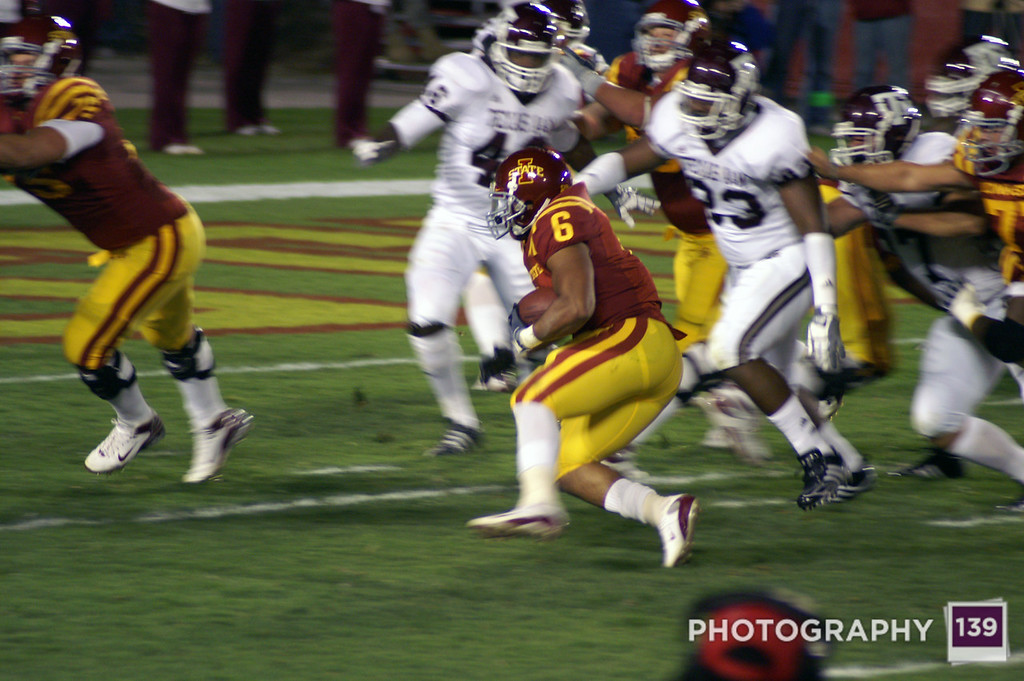 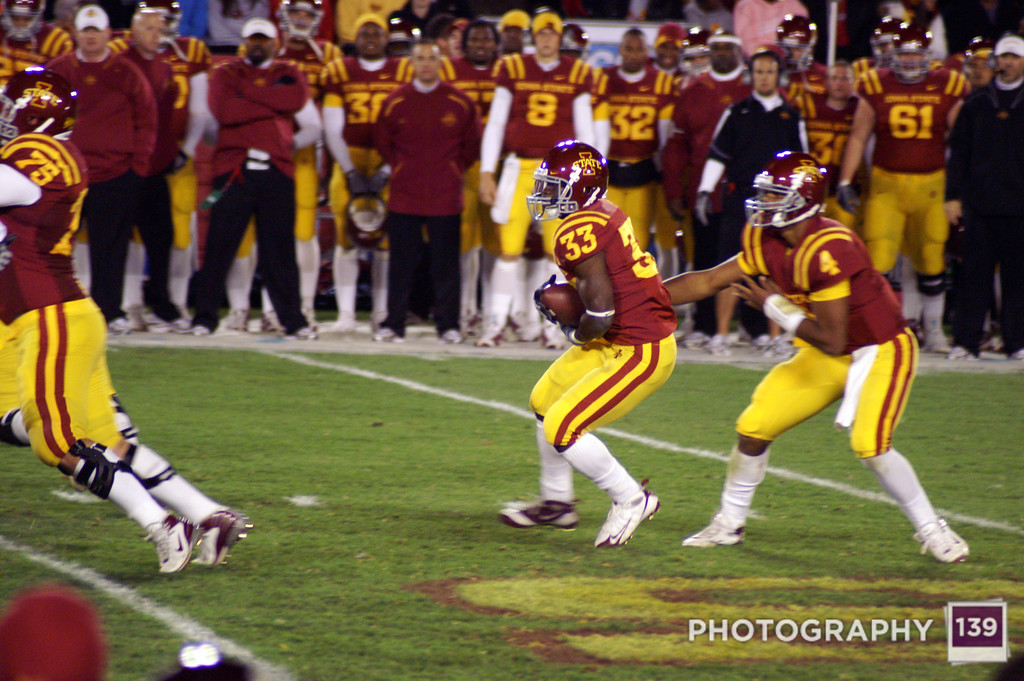 There are about 50 more pictures in the Snapshots Gallery.

I guess the important thing to remember is that the team is really young and the experience that they gain now will undoubtedly lead to a conference championship in the next couple of years.

Last Friday was Brandon’s final home game. It was the first time that I’ve been to a Boone High football game since I graduated high school.

It was an interesting experience. Some things have changed. Some surprising things happened. I took some pictures. 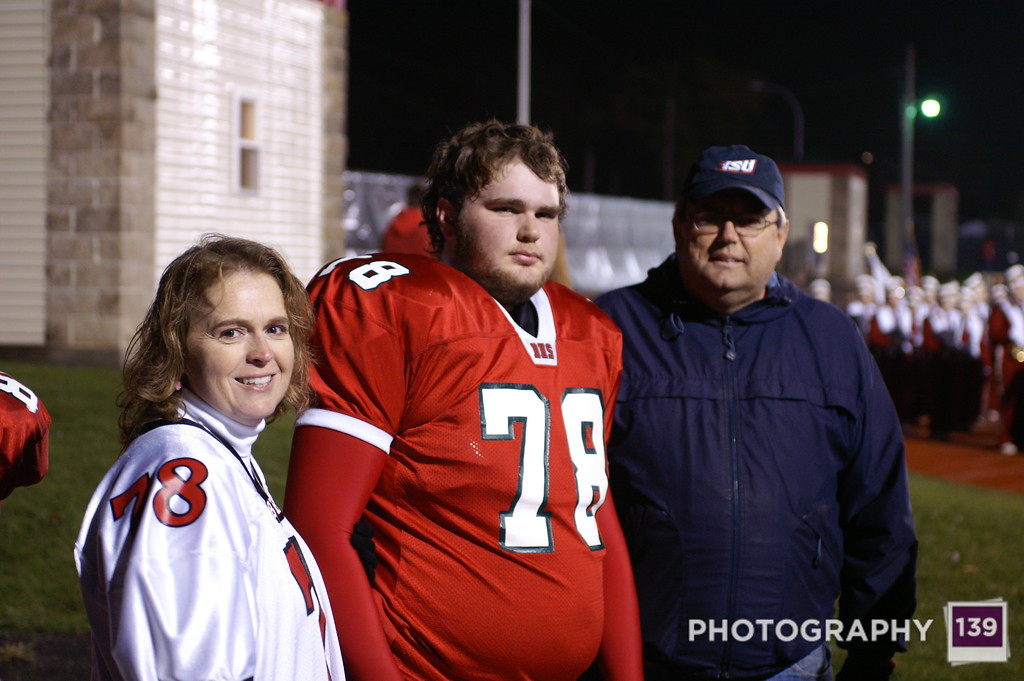 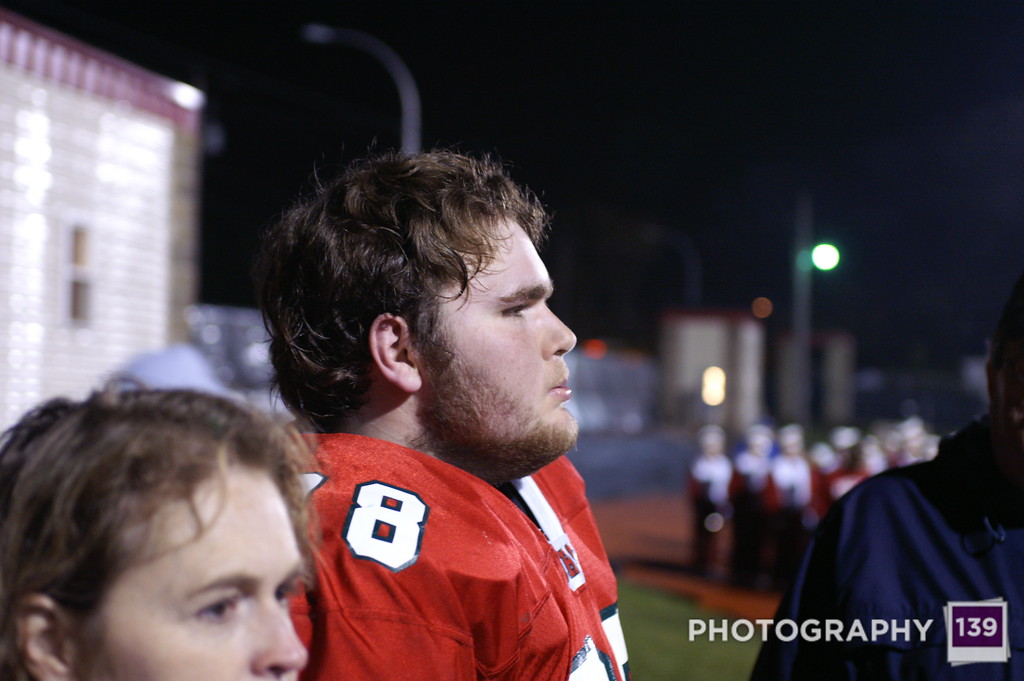 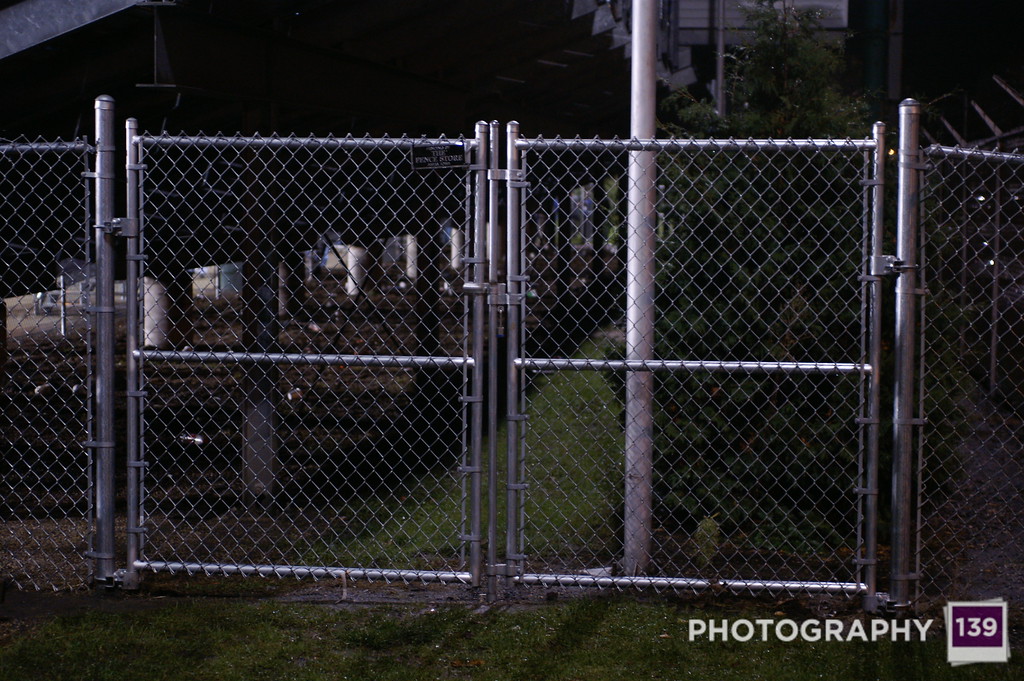 Behind the bleachers fenced off. 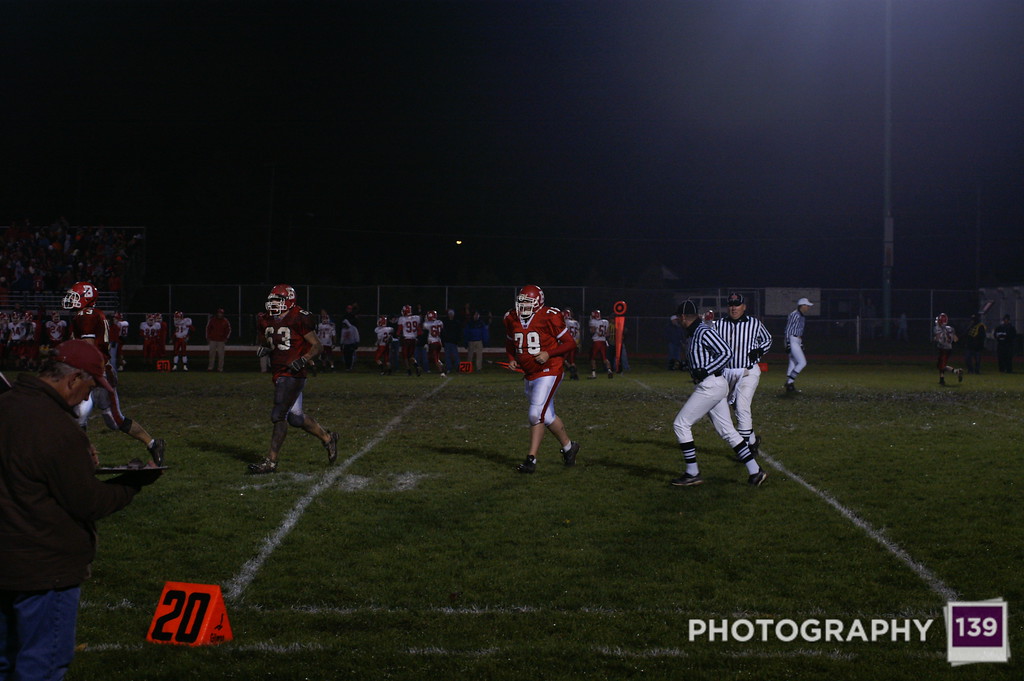 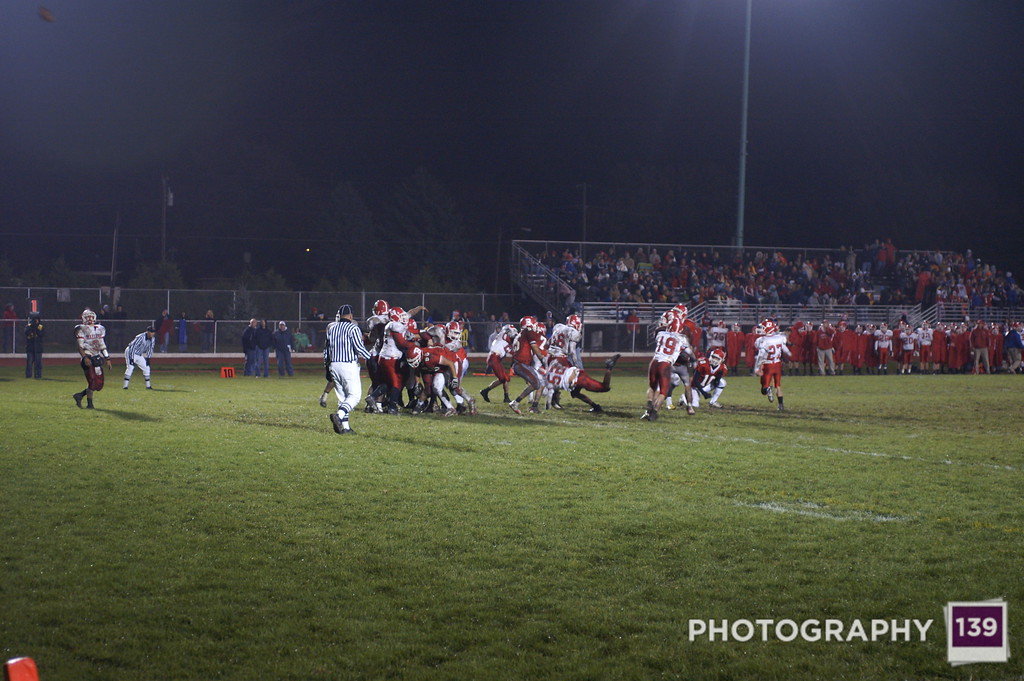 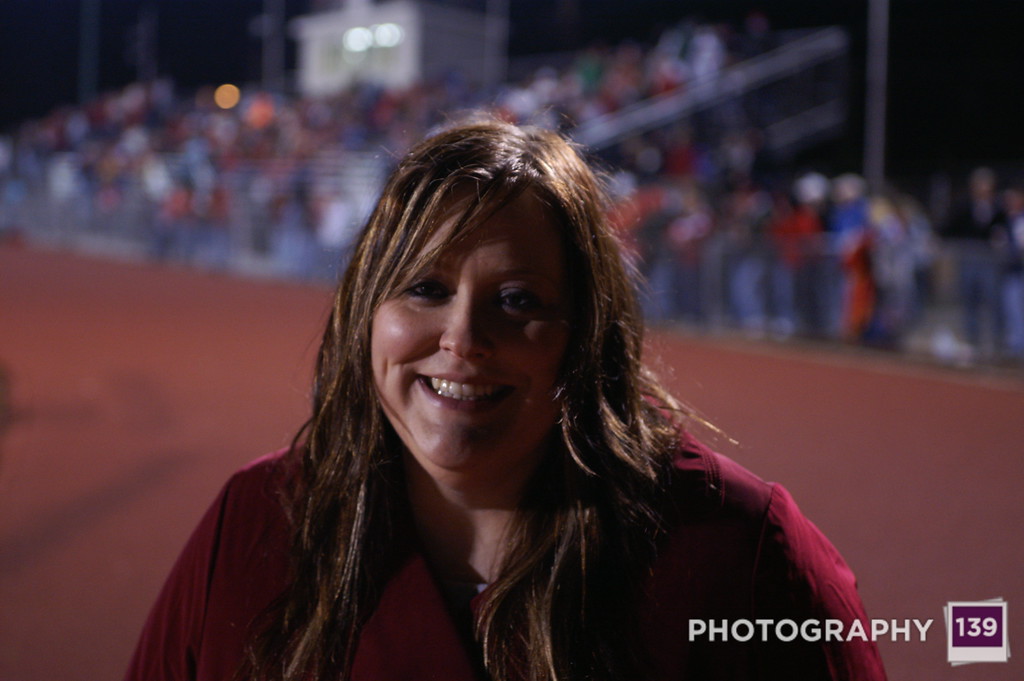 I was very surprised to see that the underside of the bleachers are now fenced off. That is where all the good stuff at a high school football game is supposed to happen.

I ran into Dan and had a nice conversation with him. Dan has shaved his head since the last time I’ve seen him. Not a bad look for him.

I ran into Dan’s wife Kim. She thanked me for forwarding on news of her work on attempting to block the strip club/juice bar from coming into town. She was very happy that the news had made it all the way to Illinois. She also revealed the real reason why she wants to stop the strip club/juice bar from coming to town. I’m not sure it is a legitimate reason.

It was also exciting that Sara made it all the way from Des Moines to the game. This was also the first high school football game that Sara has been to since she graduated from Ogden. I honestly can’t believe that she came.

This picture is meant to be a joke.

Color pictures to be posted soon.