This past weekend was Homecoming in Boone. This ended up being quite the production for Johnathan, Elainie, and Brandon. Below are some pictures of them all dressed up and looking slick. As you can tell, Elainie was really into getting her picture taken. Brandon and Johnathan? Not so much. 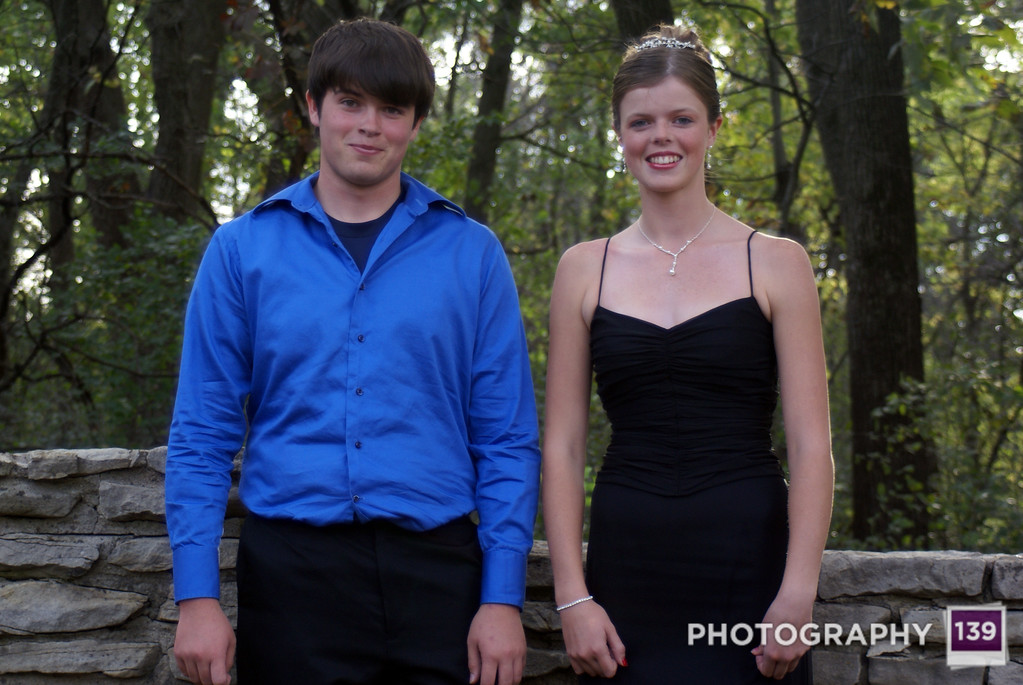 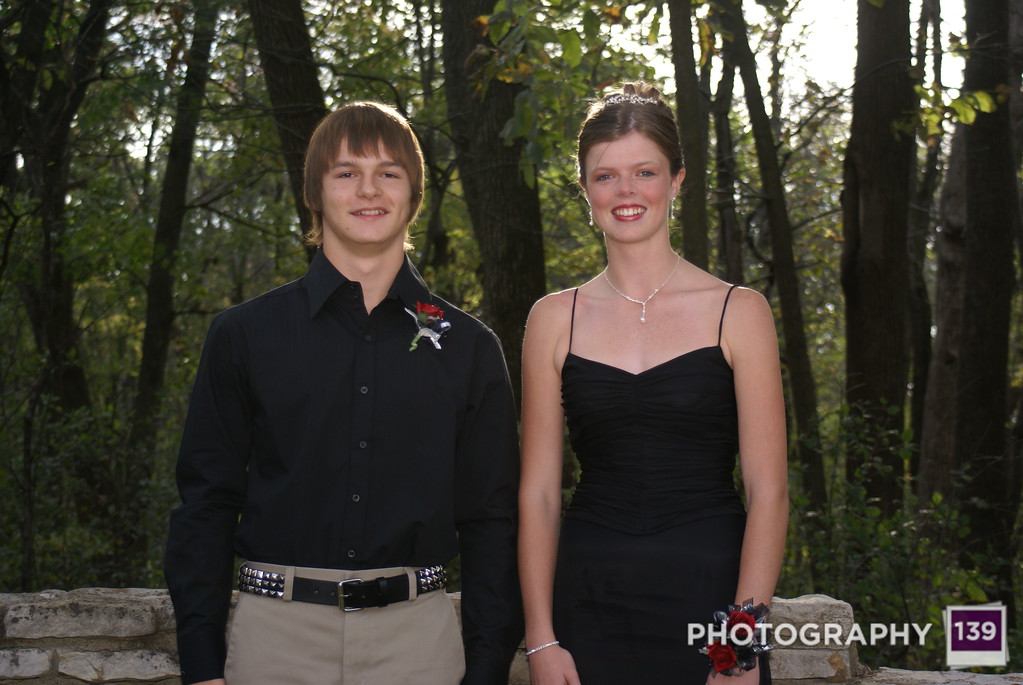 It is the week of the Big Game. I recently got an e-mail from Jason Baier that I thought that I would repost. The Iowa-Iowa State game is a big deal in this state. There are times when the rivalry does affect our lives because of how seriously a person or a group can take it. When the word’s “friendly rivalry” don’t really seem to apply.

I have been a victim of the rivalry once. Olivia and I were driving to Burlington to watch Elainie play in a softball tournament. I would like to say that I am making this up, but it is a true story. We were pulled over and given a fix it ticket for having a Iowa State license plate cover.

The exact words that came out of the cop’s mouth before he gave me the ticket was, “I know you like the Cyclones on your side of the state . . .”

Despite the inconvenience of getting pulled over and getting a ticket, I’ve never really feared for my safety in Iowa City or “their side of the state” because I was a Cyclone fan. It is this fact that makes this article below so ridiculous for me. The commentary in the story is also courtesy of Jason Baier as well.

OKLAHOMA CITY (AP) — To some Oklahoma football fans, there are things that just aren’t done in the heart of Sooner Nation, and one of them is to walk into a bar wearing a Texas Longhorns T-shirt.

That’s exactly what touched off a bloody skirmish that left a Texas-shirt-wearing fan nearly castrated and an Oklahoma fan facing aggravated assault charges that could put him in prison for up to five years.

The shocking case has set off a raging debate in this football-crazed region about the extreme passions behind a bitter rivalry. Some legal observers have even questioned whether this case could ever truly have an impartial jury.

“I’ve actually heard callers on talk radio say that this guy deserved what he got for wearing a Texas T-shirt into a bar in the middle of Sooner country,” said Irven Box, an attorney in this city 20 miles from Oklahoma’s campus in Norman.

Thomas told police that when he decided to leave and went to the bar to pay his tab, Beckett grabbed him in the crotch, pulled him to the ground and wouldn’t let go, even as bar patrons tried to break it up. When the two men were separated, Thomas looked down and realized the extent of his injuries.

“He could see both of his testicles hanging on the outside of his body,” said Thomas’ attorney, Carl Hughes. “He was wearing a pair of white shorts, which made it that much worse.”

It took more than 60 stitches to close the wound, and police interviewed Thomas at a nearby hospital emergency room.

Beckett’s attorney, Billy Bock, concedes that his client commented about Thomas’ shirt, but said it was just good-natured ribbing (is there such a thing in a rivalry like that?) and that he apologized to Thomas when it appeared to upset the Texas fan. Later, Bock said Thomas approached his client at the bar and threatened him.

“My client is a little man, and this guy [Thomas] is 30 to 40 pounds bigger than him,” Bock said. “He’s bigger, stronger, younger and probably faster, and he aggressively leaned in (what does aggressively lean in mean?) and touched my client and threatened to beat him up. … My guy was defending himself and just took control of the situation.” (by taking control of his “boys”)

Thomas’ attorney disputes Beckett’s version. “That’s total malarkey,” (malarkey? we are definitely in the south aren’t we)Hughes said. “My client never said a word to him. He got up to pay and when he paid and left a tip, the guy grabbed him.”

Beckett, a 53-year-old church deacon, federal auditor and former Army combat veteran (he is an Army combat veteran and he grabbed the guys jewels instead of just beating him up?), has pleaded not guilty. His next court appearance comes Oct. 4, two days before the Sooners and Horns tangle in their annual football game at the Cotton Bowl in Dallas.

Thomas, who once lived in Houston and became a Texas fan during the heyday of star running back Earl Campbell, is still recovering from his injuries but has returned to work as a meat cutter at a Sam’s Club warehouse store.(this story is too good to be true)

Like Beckett and Thomas, many fans of the two college squads never attended either university, but have come to identify so closely with these teams that they attach banners to their cars, wear team colors on game day and even have programmed their car horns to play school fight songs.(do you know anyone like this?)

Dallas police Sgt. Andy Harvey, a 12-year veteran of the force, said it’s not uncommon for fights to break out between fans of the two schools.

“People are passionate about their teams and their universities, and that’s a good thing,” he said, “but when you mix a real passionate sports fan and then get a little alcohol in there, sometimes it’s not a good mix.”

On both Texas and Oklahoma fan Web sites, boosters trade familiar tales of having their car tires slashed or windshields smashed for sporting the opposing team’s sticker in enemy territory.

Assistant District Attorney Scott Rowland said the rivalry will have no bearing on the way the case is prosecuted.

“It appears that it played a part in the fight,” he said, “but that won’t play any more of a role in our handling of the case than would a fight over a girl or a car or a song on the jukebox.”

I mean the Iowa-Iowa State rivalry can be kind of intense (they did have to stop playing each other for 40 years because of the violence) but I’m glad nothing like this happens around here.

My niece Elainie wrote this poem and it won a prize:

MASK
She was just there.
Not knowing what was going on.
She walked into the room and everyone was smiling.
Or so it looked like it.
Everyone looked like they were having a good time.
The smiles, laughter, drinks.
But deep down inside, she knew everyone was sad.
They were sad because they were saying this isn’t me.
This isn’t who I wanted to be.
I wouldn’t do this.
But yet they still do what they do.
Just ignoring that weird feeling, being someone they don’t know or don’t want to be.
But why?
What’s the point?
It doesn’t help you with choosing a good future, it helps you go down the wrong path.
Farther and farther from your goals, dreams, and destinies.
So why bother trying to be something you’re not?
Just take off that mask and be who you are for whom you
are and don’t care what anyone else says because in the end you win.
And they lose.