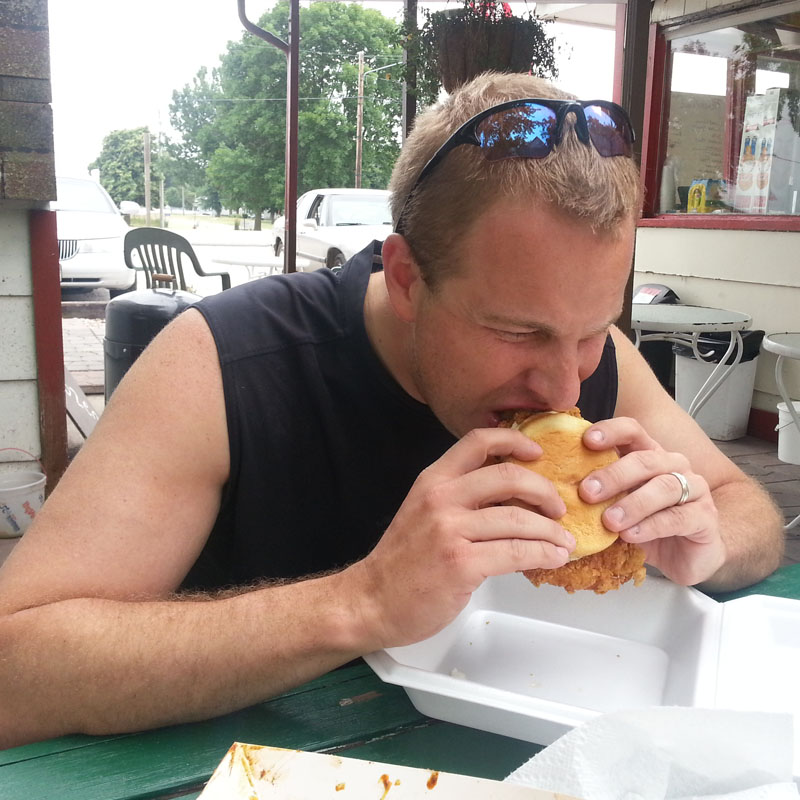 I’ve wanted to try the tenderloin at Cole’s in Slater ever since I read this article in the Ames Tribune:

But it would seem that every time I ended up in Slater, the only thing on my mind was their delicious ice cream.

This summer I resolved to finally put the tenderloin with the tear jerking story into my belly. I called up my tenderloining buddy Scottie D. and we made our way to Slater on a hot summer afternoon to give the tenderloin our scrutiny.

A few pictures from the trip:

Scott had never been in a phone booth, so we stopped in Kelley on the way down.

You’ve seen the pictures, but you have to be wondering the verdict.

Phenomenal! It is absolutely phenomenal!

It is so great that it actually has split Scott and I for the first time.

Scott is willing to proclaim it his new favorite. I am close on it, but I’m not quite ready to push it past the Country House in Colo and make it my new champion. I need to try the Colo tenderloin again, because right now, they are too close to call.

What really makes this tenderloin stand out is the seasoning in the breading. It gives it a very unique and distinctive flavor. Another important feature of this tenderloin is the passion of the owner. We didn’t get our picture taken with him, but we did talk to him for a long time and his passion for the tenderloin was intense. He spoke about his theories on thickness of the meat and how it impacted the breading.

I believe at first he thought we might be from the Iowa Pork Producers, but unfortunately we are not. I have a fear that they will miss the greatness of this tenderloin as what little respect I had for their opinion was completely crushed recently on a trip to Walcott, Iowa. But that is a tenderloin for another Wednesday.

The only criticism I would have of this tenderloin is the lack of a toasted bun. I will probably request a toasted bun next time I go to Cole’s, but I will feel bad doing it. You wouldn’t tell Van Gogh how to paint, would you?

Everything else about the tenderloin is perfection. The meat is the right thickness. The bun to meat ratio is spot on. They have the exact right set of condiments: mustard, ketchup, pickles, and onions. Don’t come into my house trying to fancy up the tenderloin with lettuce and tomato! The breading, you have to try the breading.

I won’t try to fool you into thinking that Cole’s has a great setup though. It is a small town ice cream shop, so the experience isn’t the greatest. But if you are going to a restaurant for the convenience of having napkins nearby, we probably aren’t friends. Are we?

I would currently rank these as the “Top 3 Tenderloins”

I think Scott and I will be trying a tenderloin in Jamaica in the near future, but until then…