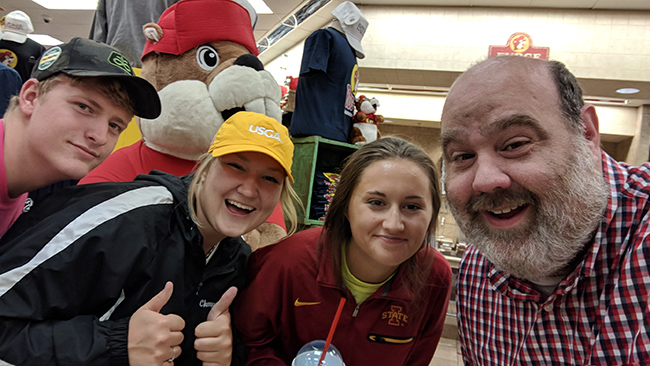 I woke up on the cold hard floor of the Methodist church in Saginaw. I got dressed and prepared myself mentally for the day.

Based on the amount of stores that cater to both, Texans LOVE donuts and pornography. I imagine some probably do both at the same time. I’m not here to judge.

Statue in the church’s beautiful courtyard.

Fountain in the same beautiful courtyard.

Their women’s group made us a delicious breakfast.

A staple of every Methodist diet, egg casserole!

The lady who made us the breakfast did taunt us with a description of dish she described as “too much”: Breakfast Lasagna. Sign me up lady!

Jaxon still thinks it is a thrill to pump gas. I’m not afraid to exploit his youthful enthusiasm.

The church televises their worship services into their fellowship area. We get it, you’re good with technology.

Congregating to worship an awesome God!

We went to their acoustic service. It was great music lead by a great musician!

They sit in the front row at our church too…

The lady in the middle was a Pastor at the church. The one on the right was a member of the congregation that recently became a Pastor and was getting assigned to her first church. She gave the sermon. I loved this worship service. There were two things of note that happened. 1 funny and 1 tragic. The funny thins was that they discussed a couple in the church that had gotten married the previous day in “Detroit or Chicago. Some Yankee town.” The tragic thing was a member of their congregation was killed in a car accident on the previous day. He left behind a wife and 2 small children. Happy Father’s Day.

Something else unique about this church was they did the light a candle thing in the corner. This is something I’ve always affiliated with Catholics because I’ve only ever seen it in Catholic churches. Really, mostly in movies. I lit 2 candles.
Shortly after the worship service, we hit the road for Vidor. Another 7 hours or so in the van coming up!

We stopped in a town where a buffet was recommended to us by one of the Saginaw Methodists, but it required a 30 minute wait, so instead we went across the street to a string of fast food restaurants: Jack in a Box, McDonald’s, Dairy Queen, Subway, and Texas Burger. I recall an unsavory taco experience at a Kansas City Jack in the Box on another mission trip with Shawn Karber. So Jack in the Box was a hard pass for me.

I went to Texas Burger because I might never get a chance in my life to try Nolan Ryan’s Texas Beef Steak Fingers.

They taste kind of you how you imagine.

The next stop was Buc-ee’s in Madisonville, I’ve always been a big fan of Buc-ee’s. At least since Carla, Mom, Alexis, and I stopped at one on our way to see Elainie graduate in San Antonio.

If you’ve never been to a Buc-ee’s, it is the single greatest gas station chain in the world. It is the exact opposite of that Road Ranger in Illinois.

I wanted to buy a Buc-ee’s hat to make it my official Mission Trip Hat, but none of them were my flavor.

The last 2-3 hours we drove through some major rain. But when we got to Vidor: BASKETBALL!

On Sunday night we worshiped and we prepared for the next 4 days of hard work.

After the worship service I found out I was part of The Cowboys. At YouthWorks they split you up into several teams. You work with that team the rest of the week on chores and at your work sites.

The Cowboys consisted of:

In the next 4 days, the pictures will concentrate heavily on those people because these are the people I spent the majority of my day.

The Cowboys had breakfast prep on Monday, so I had to make an attempt to get to bed early, to rise early. Even though trying to sleep the first two nights of a mission trip is a fool’s folly.