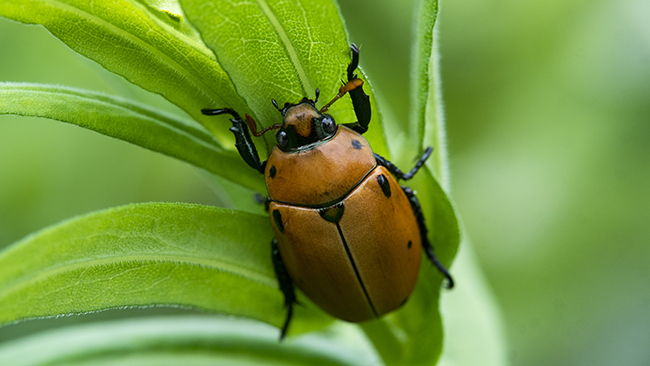 The grapevine beetle, Pelidnota punctata, also known as the spotted June beetle or the spotted pelidnota, is a species of beetle in the family Scarabaeidae (Scarab beetles), situated in the subfamily Rutelinae. Grapevine beetles are common in the north and central United States and Eastern Canada, but do relatively little damage to their host plants. The beetles fly at a fast speed, usually in a curving flight.

I recently stumbled upon a beautiful grapevine beetle in my backyard. It actually wasn’t hanging out in my grapevine though. It was more cozying up with my raspberries. I couldn’t refuse a chance to photograph such a striking and handsome creature!

Now I know insects aren’t everybody’s cup of tea, but some of you drink green tea, and that is gross. Maybe it is time you look in the mirror.

For me give me a tea cup filled with insects. Then another one filled with Baby Got Rack’s patented Thick Soul Sweet Tea, and I’m having a pretty great day.

Here are some pictures of my friend (and yours) the grapevine beetle:

Hopefully I haven’t seen the last of this sweet prince of the insect kingdom.