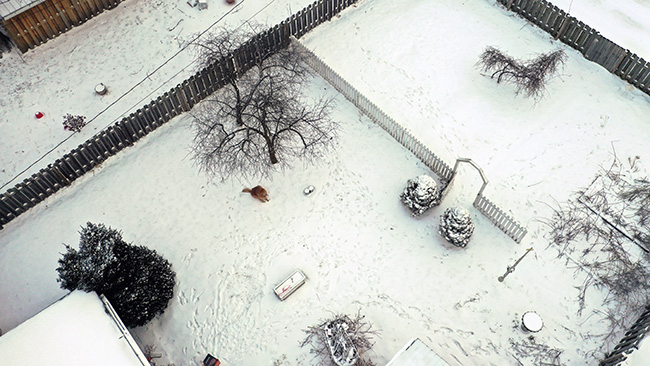 I thought I would take a Friday off from regaling you with events from the Alamo Bowl Road Trip because, I do now own the drone that I have been planning to own for several months now.

While admittedly, I only reached 9 of my 10 goals, nobody has seemed to displeased with the fact that I’ve switch the filling of my change jar to when I pulled the trigger on the Sony RX0.

I received the DJI Mavic 2 Pro on Wednesday. I was able to put it together and charge the batteries and read parts of the manual. Because I wanted to at least see it in the air, I flew it about a foot off my dining room table and took a picture.

When I got home from work on Thursday there was a brief respite in the harsh weather conditions and I was able to fly it around my backyard for a bit and snap a few more pictures.

Therefore I present the first pictures taken with Photography 139 One (name unofficial and probably will change by the end of this blog):

This is the tip of the iceberg. There will be plenty more drone blogs in the future. A full review and tons of video. Tons of video!

I can report that Naima is not a big fan of Rodan 139 (see, I told you the name would change), but I feel in time she will grow to love it. Like how she loves being carried to the basement to watch Iowa State basketball games or two watch the feature movie on Movie Night or how she loves inflatable things or how she loves her dog food bag.

Speaking of Movie Night, Movie Night in February will be ON February 17. Projector rolls at 6 PM. The feature will be FORTY GUNS. It will be the first (but certainly not the last) Samuel Fuller movie shown during Movie Night. The B Movie is still to be determined. Snack currently to be determined, but popcorn will definitely be on the menu.

This is your reminder that this week’s WEEKLY PHOTO CHALLENGE theme is EYE:

An EYE photo is simple enough. It is a picture of an EYE or anything EYE related.