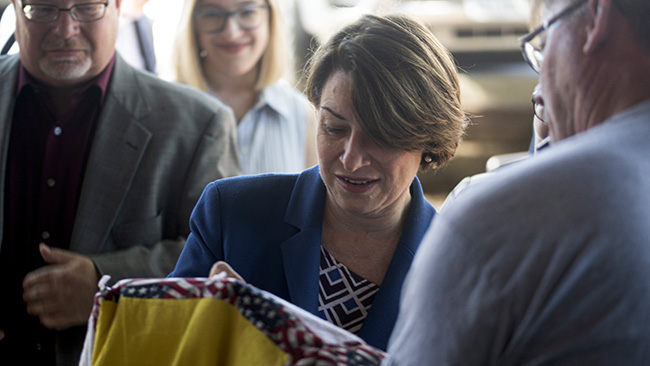 This is the 5th installment on my quest to meet, see, photograph, and possibly get photographed with the person that will take the Oval Office in January of 2021. On Memorial Day Sunday at noon I filed into the Livery Deli to see Minnesota Senator Amy Klobuchar.

There are a couple things to know about this event. Number 1, the Livery Deli is a terrible venue to hold such events and an event worse event to do any photography. Number 2, I badly underestimated how many people would be there.

Klobuchar isn’t polling all that well. Also, I thought that not many people would be free at that time of day on a holiday weekend. I thought that if we showed up at roughly noon, we would still be able to get a good seat. I was wrong. From talking to a member of the Klobuchar staff, 3 times the number of people that they were hoping for showed up.

Klobuchar became a national name when she lit up rape enthusiast and unqualified partisan Supreme Court nominee Brett Kavanaugh during his confirmation hearing.

Here is a little more about Amy Klobuchar from the Wiki:

Amy Jean Klobuchar (/ˈkloʊbəʃɑːr/; born May 25, 1960) is an American lawyer and politician serving as the senior United States Senator from Minnesota. A member of the Minnesota Democratic-Farmer-Labor Party, Minnesota’s affiliate of the Democratic Party, she previously served as the Hennepin County Attorney.

Born in Plymouth, Minnesota, Klobuchar is a graduate of Yale University and the University of Chicago Law School. She was a partner at two Minneapolis law firms before being elected county attorney for Hennepin County in 1998, making her responsible for all criminal prosecution in Minnesota’s most populous county. Klobuchar was first elected to the Senate in 2006, becoming Minnesota’s first elected female United States Senator, and reelected in 2012 and 2018.

Here are examples of her positions from her campaign website:

Education: We also need to make sure all our children can get a great education. That means increasing teacher pay and funding for our public schools, with a focus on investment in areas that need it the most. And we need to make sure the rising costs of college aren’t a barrier to opportunity. Amy supports allowing borrowers to refinance student loans at lower rates, loan forgiveness for in-demand occupations, expanded Pell grants, and tuition-free one- and two-year community college degrees and technical certifications.

Agriculture and Rural Communities: America’s prosperity depends on supporting our family farmers and rural communities, but today farm income in America remains near historic lows. Amy has been an advocate for rural communities and our farmers, and she understands that this country has to do more to provide a strong safety net to help farmers, as well as invest in our rural communities, which includes hospitals, childcare, housing, connecting every household to high-speed internet by 2022, and a strong farm policy.

Economic Justice: We must beat back decades of systemic racism and inequality. Amy believes this begins with early-childcare and fixing our education system, addressing racism in health care such as disparities in maternal and infant mortality rates, ending housing discrimination so that everyone can afford to rent an apartment and own a home in a good neighborhood for their kids, and tackling disparities in wages and in retirement savings.

Labor: As the granddaughter of an iron ore miner and the daughter of a union teacher and a union newspaperman, Amy will bring one clear but simple guide to the White House: When unions are strong, our country is strong. As President, she’ll stand up against attempts to weaken our unions. That means achieving real labor law reform, ensuring free and fair union elections, protecting collective bargaining rights, rolling back Right to Work laws, and making it easier — and not harder — for workers to join unions.

Because I didn’t get a good seat and because of the terrible lighting, I didn’t get many pictures, but here are a few: 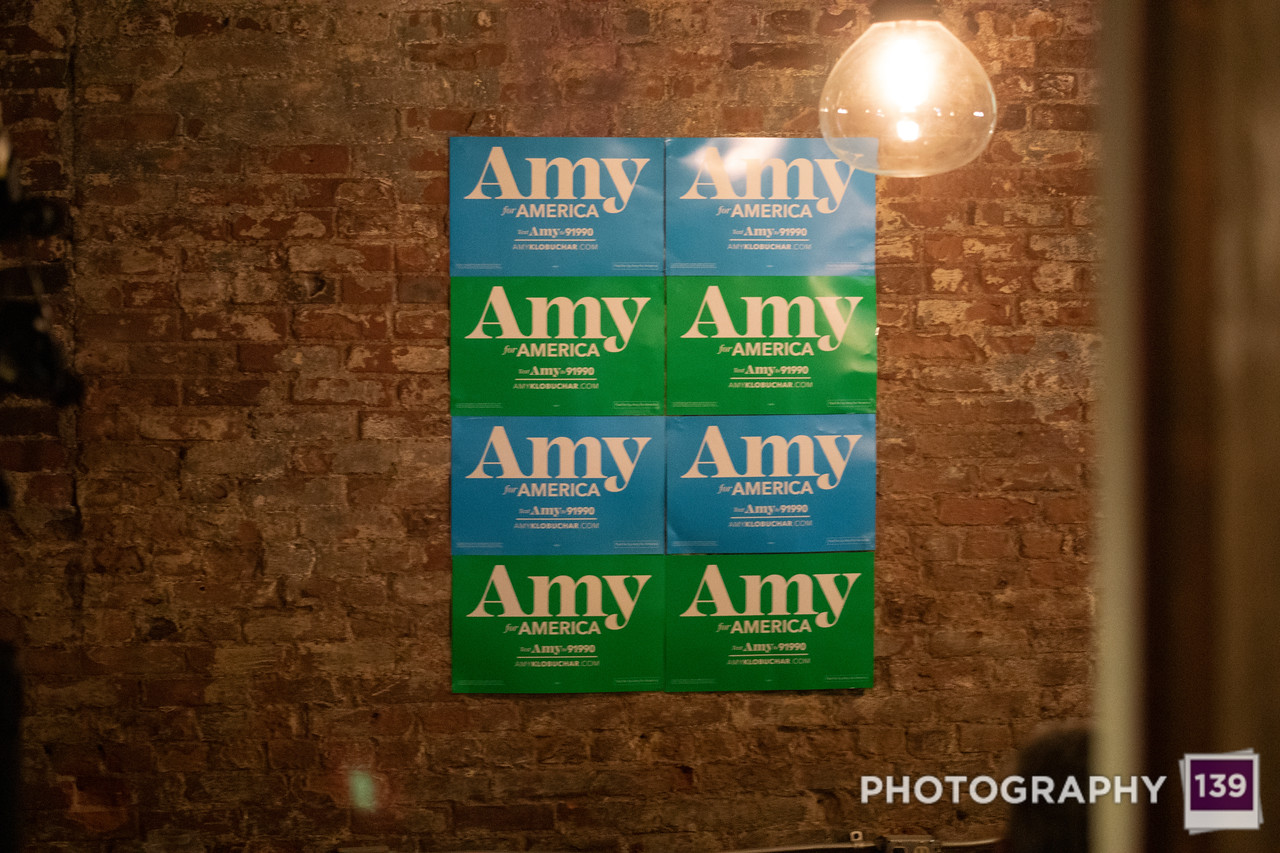 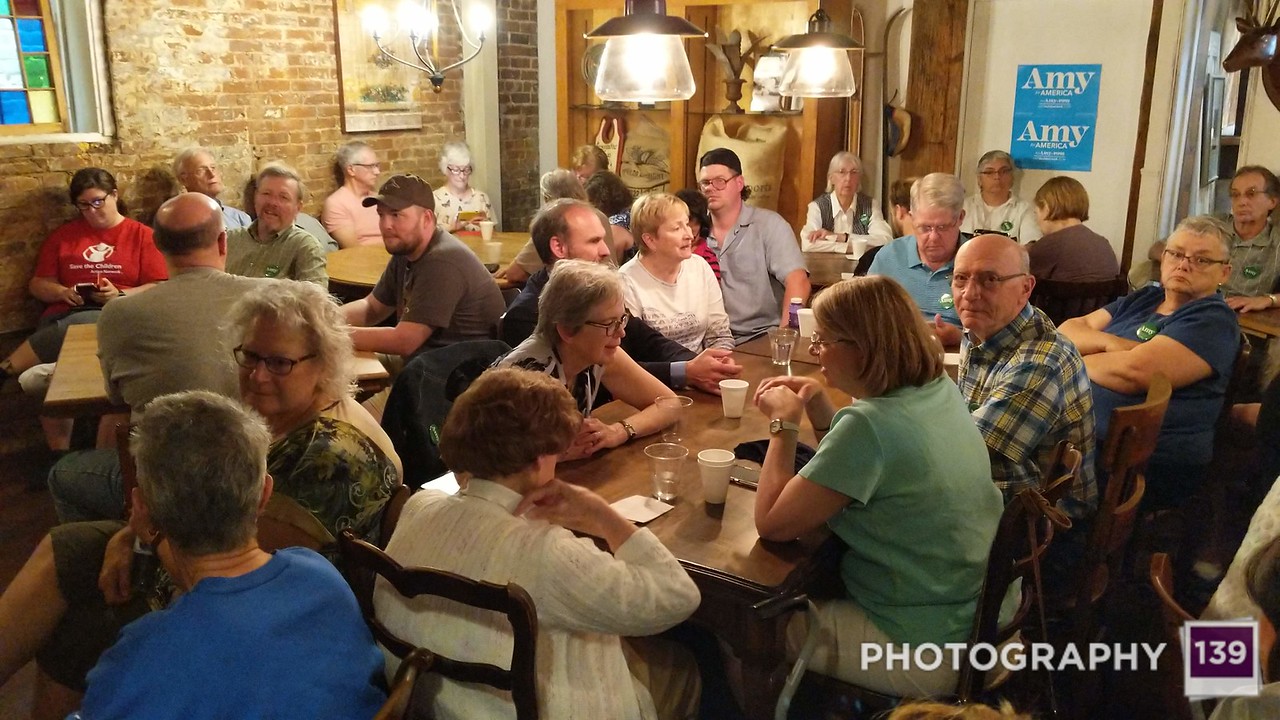 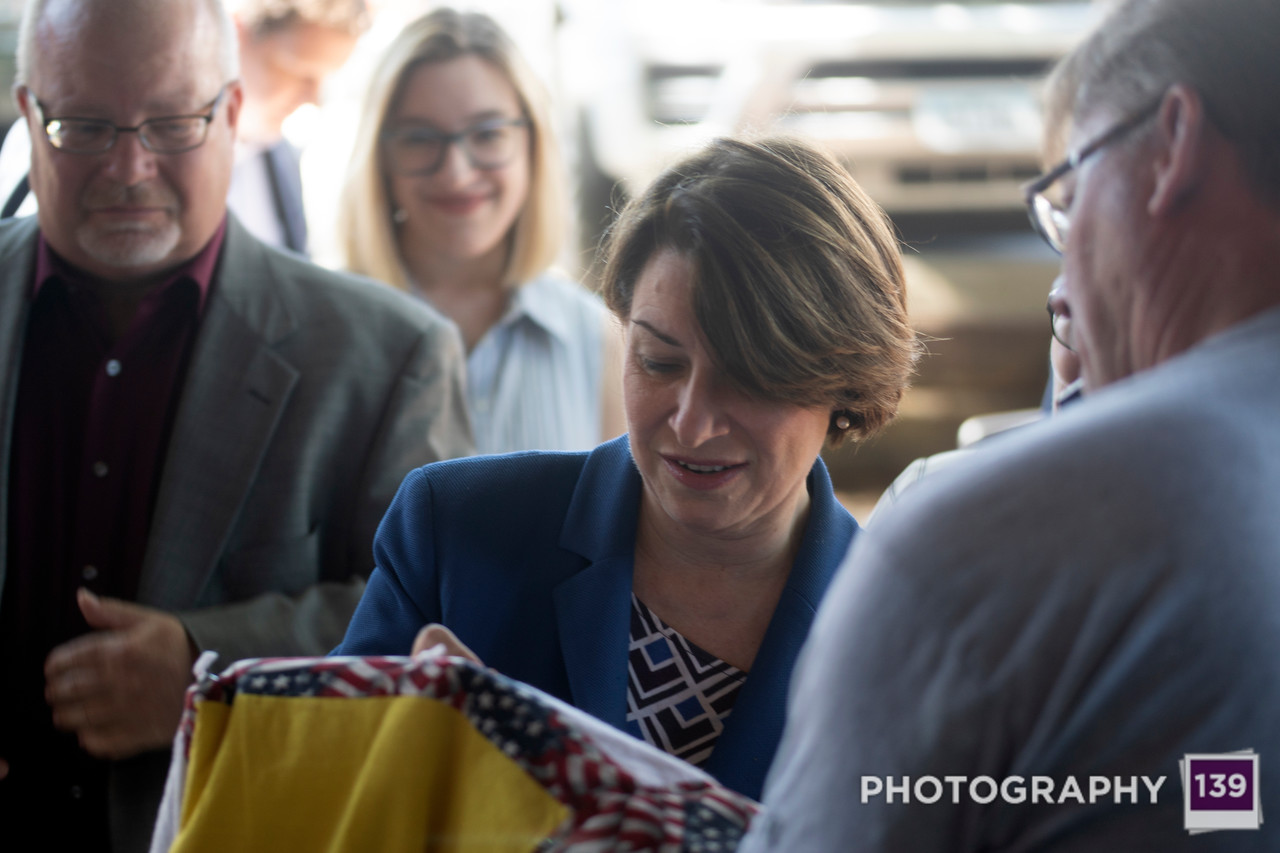 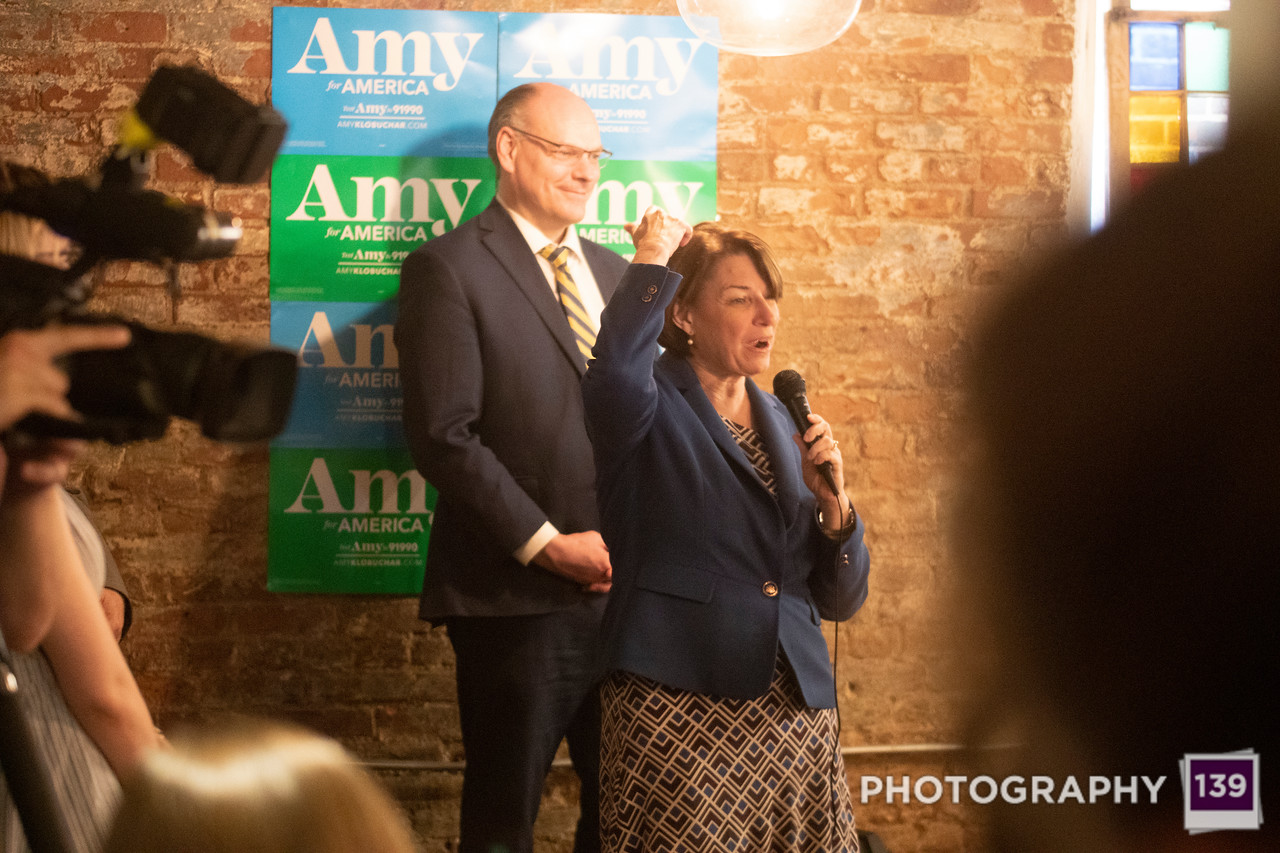 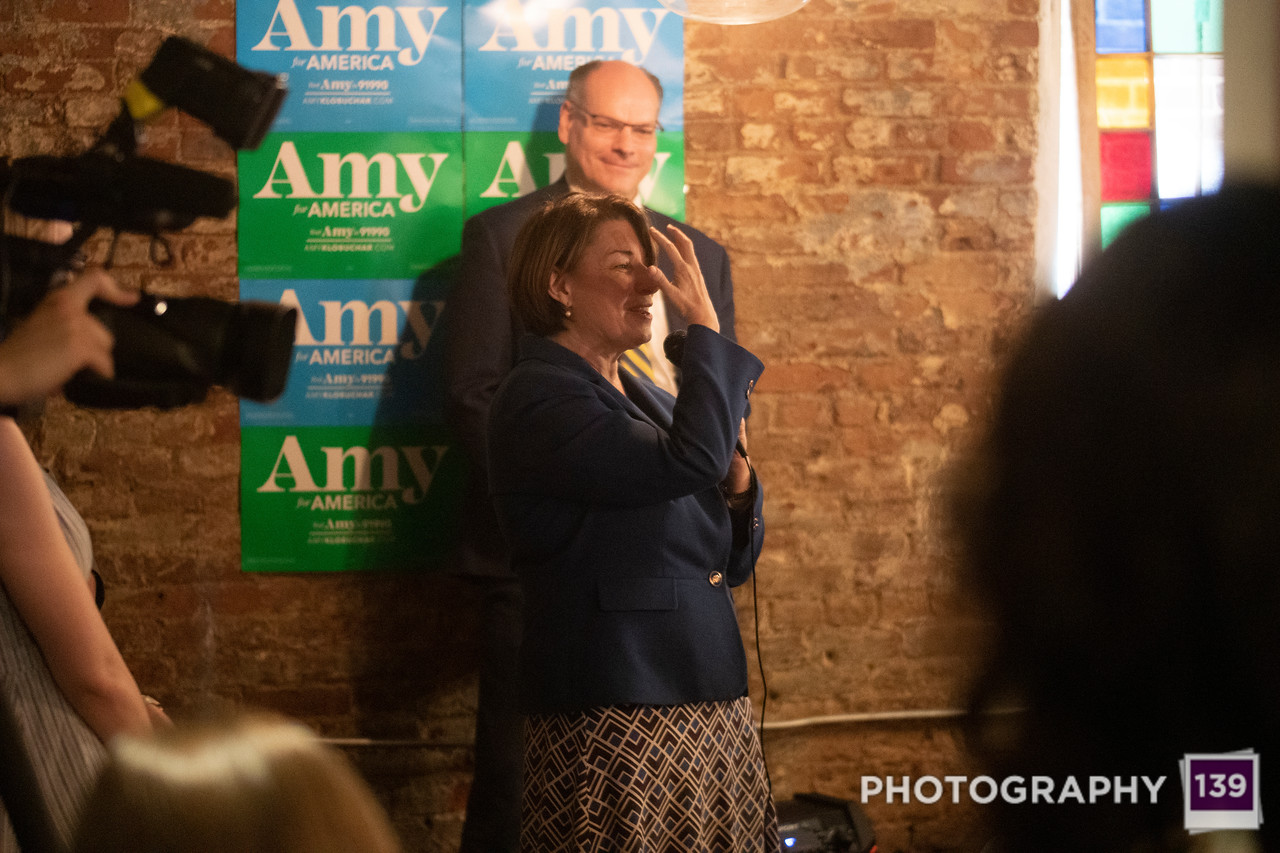 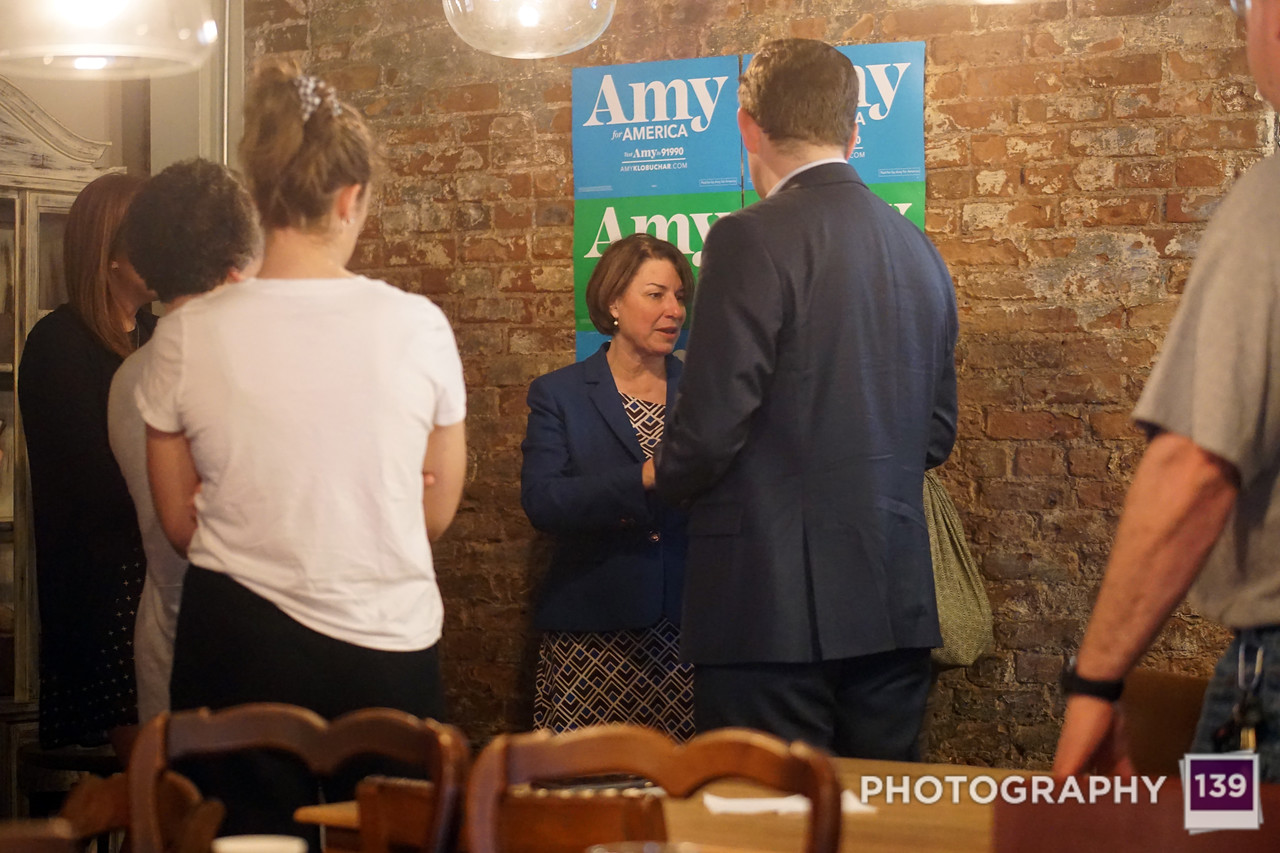 Klobuchar was the funniest and perhaps most relatable candidate that I’ve seen. I think that is the midwest part of her.

I believe the next candidate I am going to see is John Hickenlooper. Hey, they can’t all be rock stars.