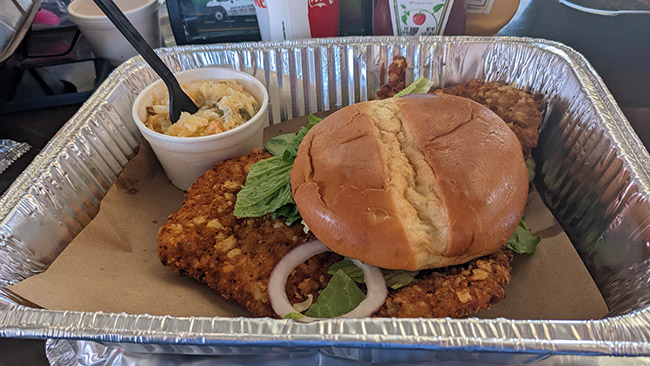 Iowans’ favorite pork dish is the breaded pork tenderloin. You can be rewarded for traveling the state and sampling these delicious sandwiches at 10 of 14 designated locations on the newest version of the Iowa Tenderloin Trail.

Inspired by the success of the original Iowa Tenderloin Trail, the Iowa Pork Producers Association (IPPA) has launched version “2.0,” an update of the 2017 trail.

“It was time to feature more areas of the state that weren’t represented in the first trail,” said Kelsey Sutter, IPPA’s marketing/programs director. “There are many places to enjoy a delicious, handmade, breaded tenderloin in Iowa. After all, we are blessed with them being represented on almost every menu across the state.”

The tenderloin is an iconic food in Iowa—the nation’s No. 1 pork-producing state. The new trail includes restaurant recommendations from IPPA President Dennis Liljedahl, Iowa Secretary of Agriculture Mike Naig, and athletic directors at Iowa State University in Ames; Drake University in Des Moines; and the University of Iowa in Iowa City.

The trail also highlights restaurants’ signature drinks, side dishes, and desserts, and promotes nearby attractions as possible side visits. Sutter hopes consumers incorporate the trail into vacations, weekend getaways, or day trips.

“The Tenderloin Trail encourages Iowa tourism across the state, supports local restaurants and businesses and, of course, celebrates Iowa’s delicious pork and Iowans’ favorite way to eat it,” said Trish Cook, chairwoman of IPPA’s restaurant and foodservice committee. “I absolutely love a good tenderloin and knowing where to find one!”

Trail explorers will receive a stamp on their passport when they order a tenderloin at any of the restaurants on the new trail. If they earn 10 stamps within a two-year period, they will be awarded an “I Conquered the Iowa Tenderloin Trail 2.0” T-shirt from IPPA.

To participate in the Iowa Tenderloin Trail, diners need to download and print the official passport at www.iowapork.org/tenderloin-trail. Passports also can be picked up at the IPPA office in Clive, or at any of the restaurants along the trail.

I’ve been meaning to get started on the Trail 2.0 for quite sometime, but you know, pandemic. But back in January I finally hit the place that is closest to my homestead. Whatcha Smokin? BBQ in Luther. I’m not going to review the tenderloin because it has been covered on a previous “An Artist’s Notebook” entry. It is sufficient to say that it is a great tenderloin.

Here are some pictures from my trip there after church with Teresa, Logan, and Dahlia.

I don’t have any current plans to hit a tenderloin joint, but ideally, I should hit one a month, in order to get that shirt! I’ll probably at least try to get up to the Webster City one this month.

This is your reminder that this week’s THE WEEKLY PHOTO CHALLENGE theme is BELIEVE.

BELIEVE! What a great theme for Year 9 of THE WEEKLY PHOTO CHALLENGE!
I’m going to be 100% transparent on this theme. It is 100% inspired by TED LASSO. Let’s face it, if you aren’t watching TED LASSO, then you are watching television wrong! You better do something about it. Like start watching TED LASSO!