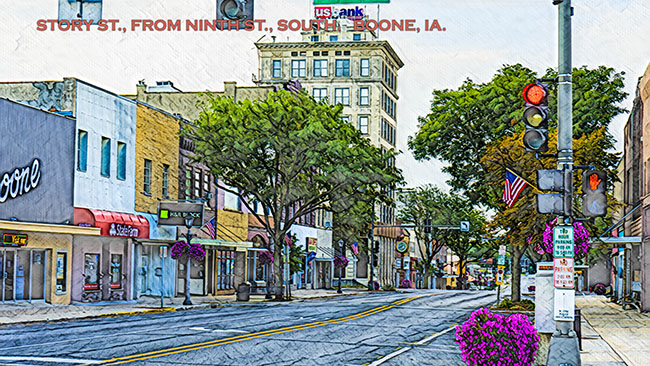 Several years ago Jen suggested that for a photo project, I “recreate” old postcards. I loved the idea and I did it for exactly one postcard. Then did absolutely nothing else. For years. While I was on my vacation, I decided to start that project up again. I think I underestimated how difficult it might actually be to do well. I’m not sure my first (okay second) attempt at is necessarily done well.

In fact, in retrospect, I learned that I need to do a little more research before actually leaving my house and going out there to take the picture, to deliver on what I’m trying to do. For example, one of the pictures that was meant for today’s reveal, I definitely have to do again. I was not far enough west on 8th Street.

This picture is looking south down Story Street, from the intersection with 9th Street. The original is more of an illustration than a photo, so I tried to make it look like an illustration in the editing. Making it bright and colorful. Like it probably was originally (I’m guessing) rather than how it has faded over the years.

This picture postcard is looking north up Story Street from near Sixth Street. I really struggled with this one because I’m guessing this picture is probably from the 1950s. I am surprised by how many of the buildings in the original picture are gone. On that corner of 6th and Story used to house Vogler-Nieman Chevy, Buick and Pontiac. Plus a Champlin Oil. There was also a small building that sold popcorn there was well.

Here is a look at a couple old photos from a Boone News Republican article by Ed Mondt of that intersection:

If a guy wasn’t going to open a donut shop in his spare time, he could do worse than bringing back the popcorn shack.

This postcard is a picture of the entrance to McHose Park. Not much has really changed much. There is a stop sign now. The road has been paved. There is a new McHose Park sign. The park was closed at the time I took the picture because of derecho damage. In the editing, I put a slight sepia tone to try to match the original.

I think I’m going to try to do these in sets of 3. The next set of 3 will probably involve the Boone Biblical College, Ledges State Park, and the location of Boone’s old post office.