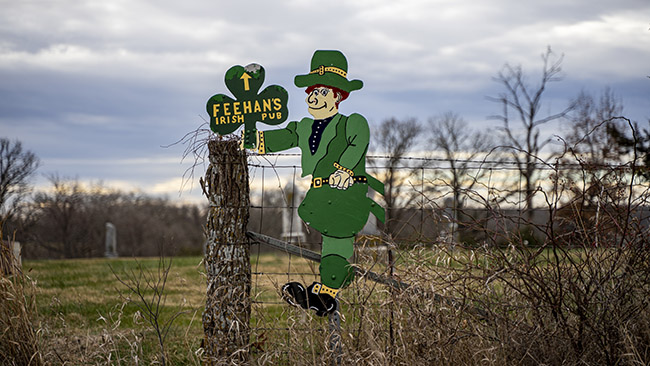 A long, long time ago when I revealed the towns signs of Monroe County I pointed out that the town of Melrose, Iowa had a memorial up in their town park to honor the 1936-37 Melrose Shamrocks boys basketball team. A team that the Des Moines Register honored as the best team in the first 100 years of Iowa boys basketball in 2012.

Kio took great offense to this and sent me the following email:

Some of what Melrose claims about their championship basketball team might be a bit of blarney. I have to stick up for the Boone High Boys State Basketball 1931 State Champions. Although I’m not completely impartial, my Dad was the captain of that team, it had a legitimate star at all positions. Also worth noting, there were no classes or divisions in high school basketball in those days. All the teams in the state were lumped together. So if you won the state championship, you were truly the best team in the state. I always add this footnote when talking on this topic. Although Boone hasn’t won a state basketball tournament championship since 1931, no one would have been prouder to see his team’s record beaten than my Dad.

While Kio is clearly prejudiced, I think it is fair to reveal why the Melrose Shamrocks are considered the best boys basketball team in the first 100 years of Iowa boys basketball.

Here are some facts about them:
+ Melrose was the smallest school to ever win a single-class state basketball title in Iowa. Enrollment was 66. They beat Marshalltown in the championship game. A school with an enrollment of 1,077.
+ Melrose was the first team to go undefeated in state history. Going 33-0. They defeated undefeated Rolfe (29-0) in the semifinal game. They beat them 29-13.
+ Their 35-17 win over Marshalltown was the largest margin of victory in the championship game up until that point.
+ Played their home games in an opera house because they didn’t have a gym. The court measured 30 feet by 40 to 45 feet. Why 40 to 45 feet? One of corners of the playing floor featured a wood stove that heated the building and was blocked off so players didn’t run into it. A standard basketball court is 50 feet by 94 feet.
+ “Many of the players on the Melrose basketball team wanted to fit in with the “big city” crowd of Des Moines. In the fashion of the day, they slicked back their hair with Rose Hair Oil. Rose Hair Oil was inexpensive (“about 15 cents per gallon,” according to Walt O’Connor), so they apparently used lots of it. The oil also had a nice smell to it.

While this was fine before the tournament started, it gave the team trouble in their first game against Geneseo. During the game, the hair oil went from their hair to their hands to the ball. As Walt O’Connor recalled, “We started perspiring and wiping our heads to get the hair out of our eyes, and the first thing you knew, the referee couldn’t hold the ball.” After having trouble handling the ball in the first half, the players washed out their hair at half time. Better ball handling in the second half helped them to win the game, 35 – 34. After almost letting the first game of the tournament slip their grasp, Melrose stopped using the hair oil in the later games.”

Some of this information is taken from the Melrose website article on the team:

All of that being said, the Ames High team featuring Harrison Barnes and Doug McDermott would have beaten this team by at least 20 points. They did win 53 games in a row.

Here is the first collection of the auxiliary images from a road trip I took to Monroe and Mahaska County with Teresa. There are still two more collections of images to share from this road trip.