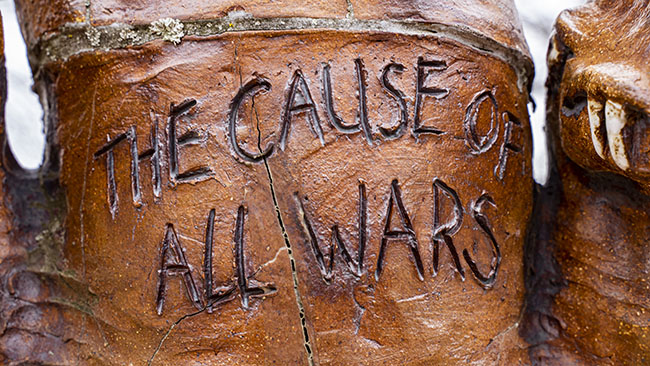 Here is another collection of auxiliary pictures from my road trip to Plymouth and Sioux County to harvest their town signs.

Most of these pictures are of the extremely bizarre sculptures in Hospers, Iowa. Here is some information on the sculptures:

Frederickus Reinders (1874-1959) who worked as a house painter, furniture salesman, and undertaker, created a colorful monument to those in his hometown who served in World War I. Standing 20 feet tall, dedicated on September 5, 1921, it features a doughboy, an eagle, American flags, and the goddess Columbia in a blue gown (The models for the doughboy and the goddess were local young people).

Reinders’ other monuments in town — built, like his WWI monument, out of steel, chicken wire, and painted cement — were completed in 1945, and include a tribute to the battle for Iwo Jima, a Goddess of Victory, a Statue of Liberty, and a four-headed allegorical war dragon.

All of Reinders’ sculptures have been restored and repainted by Josh Wynia and art professor Jake Van Wyk of nearby Dordt College.

Reinders’ WWI sculpture was designed with a plaque to be inscribed with the names of Hospers doughboys who never made it home alive. However, it turned out that only two died, and not from battlefield wounds, but from the flu. So the plaque was left blank.

I find it interesting that dying from the flu isn’t plaque worthy. Tough break your dead, but not worth memorializing. Tough break doughboys.

By the way, I almost got ran over by a car as I was walking toward the sculpture that is in the middle of an intersection. It was 100% my fault as I was reading a text message and just wandered out in to the street. Don’t feel bad if it was your text message I was reading. Clearly my fault, but it is okay if you feel a little bad. The lady that almost drilled me did pull over and we had a nice conversation. She tipped me off to the rest of the sculptures in a nearby park.

There are plenty more pictures from this road trip left to share.