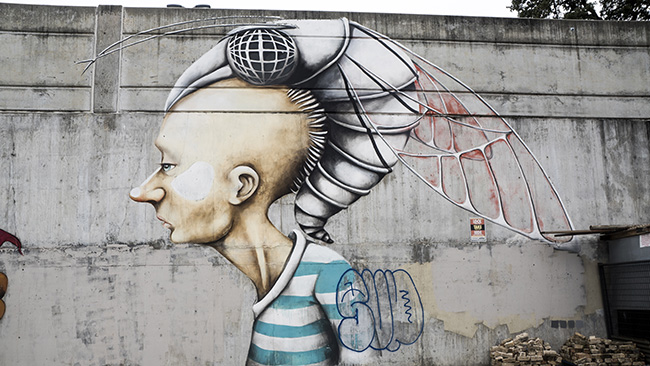 We gave her a hug. Loaded back up in the rental and left Waco profoundly changed in a way that is hard to figure. My best guess is that it would be the way you would change if you saw the Vietnam War Memorial with a veteran of the Vietnam War or if you talked to a holocaust survivor or met somebody that was in the towers on 9/11. Something that was merely academic, was suddenly real.

We were a couple hours from San Antonio and several hours from the kickoff, but the game seemed decidedly less important than it did just an hour or so earlier.

We only made one stop between Waco and San Antonio. Some gas station that won’t be remembered for the cleanliness of their bathroom. Bathroom not pictured.

We reached our hotel near the San Antonio airport about 4 hours before kickoff. We dropped off our stuff and took an Uber to downtown San Antonio to meet Andree and his brother. The Uber driver really hated Lonestar Beer. He made a point of that in our conversation.

We met Andree and his brother at their hotel and walked to Fudrucker’s for supper. This violates the #1 rule of Christopher D. Bennett road tripping, but I was hungry and wasn’t in the mood to make a big deal out of it.

The River Walk, which we walked by.

On our way to Fudrucker’s we ran into a guy with a beard that was almost as impressive as mine. We exchanged pleasantries and then we hugged it out for a bit. I think Andree and his brother were a bit mesmerized by this exchange. Apparently they have never hugged a complete stranger. Which is sad and means that they clearly need to grow beards.

My burger and onion rings hit the spot!

After the meal we walked to the Alamodome for the Alamo Bowl. We walked a good portion of the way with a Washington State graduate that was from San Antonio originally, but now lived in Japan. He was fortunate to be able to attend the bowl game of his alma mater because he had come home to visit his mom for the holidays. Washington State happened to be playing in San Antonio. Really worked out for him. He was a pretty cool guy.

We got to the game and I had an usher take our picture:

The usher walked back like 20 rows to take our picture to make it horribly backlit. I did what I could to salvage the photo in post.

Unfortunately, the Cyclones couldn’t pull off the victory. The refereeing was dreadful. The kind of refereeing you get one Big Ten refs referee a Big 12 game. They just don’t see the caliber of athlete and they aren’t prepared for the speed of the game.

This resulted in one of Iowa State players being ejected from the game for targeting, but replays showed the Cyclone more like softly landed on top of the Cougar quarterback.

Another terrible call was a play where Matt Eaton caught a pass and took 4 steps before being tackled. The ball came loose as he hit the ground. It should have been a 20 or so yard completion for the Cyclones. Somehow the refs called it an incompletion.

Regardless of how terrible the refs were, Iowa State has to look in the mirror and face the fact that they gave that game away. 3 turnovers. 7 false start penalties. That isn’t a recipe for beating anybody, let alone a top ten team.

It was with that bitterness we filtered out of the Alamadome, knowing the better team didn’t win that night, but excited to see what these young Cyclones do in 2019. Even though we were facing the reality that Hakeem Butler and David Montgomery were probably leaving for the NFL with a year of eligibility left.

Jesse and I bid Andree and his brother a fond adieu and took a Lyft back to our hotel. I think our Lyft driver was somewhere on the autism spectrum. At the very least he was extremely socially awkward. Not the type of guy that hugs a stranger on the streets of San Antonio.

After having the same conversation with the Lyft driver at least 5 times on the way back to the hotel, I was relieved as we hit the hotel room. I crashed almost immediately.

Jesse had booked us kind of a fancy pants hotel with all his Marriott points. They had a spread for breakfast that made me almost (ALMOST) forgive them for not having a make your own waffle maker that makes waffles in the shape of Texas. 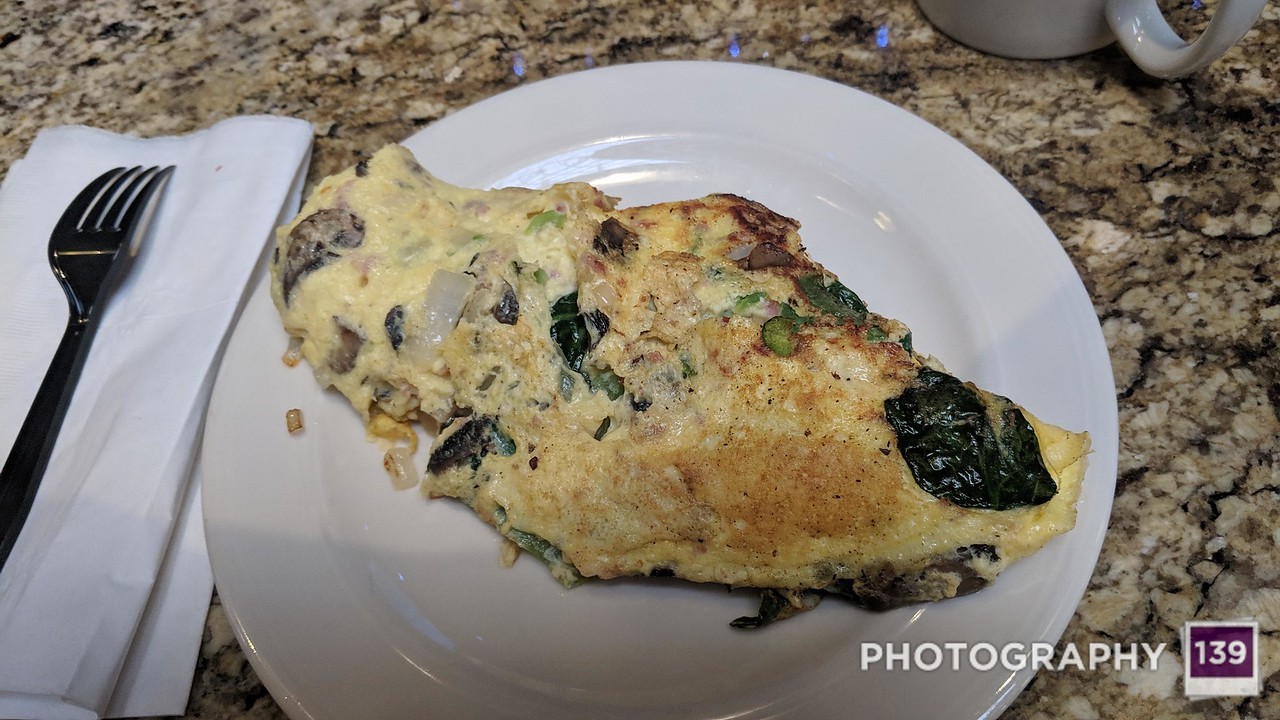 They had 2 guys making cook-to-order omelettes.

Jesse had something of a dreadful pain in the gulliver, so I took over the driving duties. The trip back to the Cyclone State was mostly business, but we did stop in Austin. 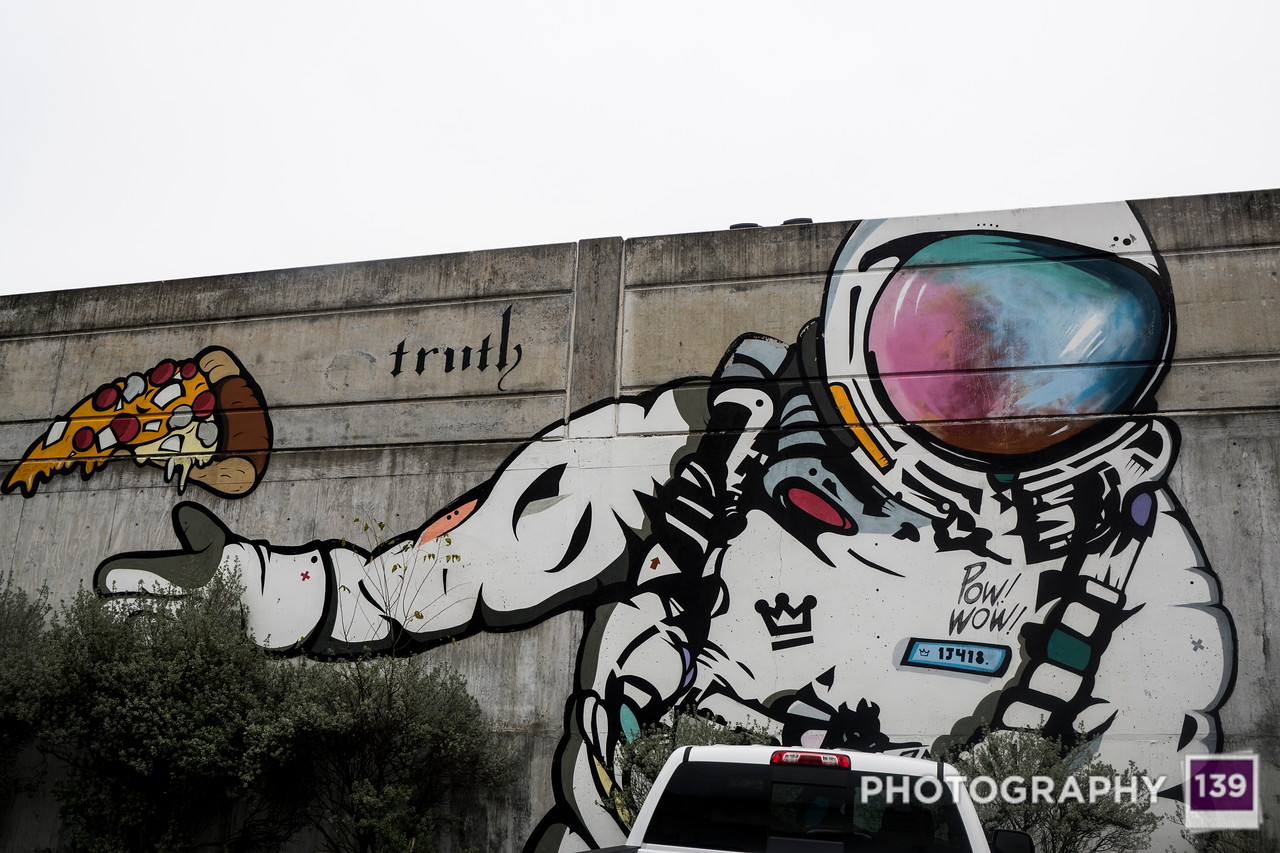 The guy we met outside of Texas’s stadium was interesting. He immediately wanted to engage us in a political discussion when he found out we weren’t from Texas.

He had two main planks to his political beliefs.

#1. Texas not having state income tax was the greatest thing ever.

I was happy for him to be so happy about it, but I tried to explain to him that having no income tax just means that he pays higher taxes in other areas. Furthermore, not having state income tax moves the tax burden from the wealthy and makes poor people pay more taxes.

He insisted this wasn’t the case, but it is in fact true.

To his other point that he wasn’t get taxed more in other ways to make up for the lack of income tax, the numbers don’t back him up there either.

Just putting Iowa against Texas, Iowans pay a little more than 1% more in state taxes than Texans. But 1% is not the great number that he purported.

Excise and sales tax burden is inordinately paid by the poor and middle class.

While the jury’s still out on the benefits of living in a state with no income tax, experts agree that there is one clear result for those states that do levy an income tax.

It helps the poor.

An income tax is a classic tool for redistributing wealth. It’s usually “progressive” in nature, meaning that it taxes higher earners at a greater rate than lower earners. Other taxes typically don’t have that Robin Hood-like characteristic.

Sales taxes, for example, are considered “regressive.” They don’t change depending on the income level of the consumer. They treat everyone the same. So do levies on food, gasoline and other key consumable items.

These taxes place an unfair burden on the poor, according to research from the Institute on Taxation and Economic Policy. The reason is the lowest earners in the state devote the lion’s share of their take-home pay to buying things that are subject to sales taxes. The wealthy, who can save a chunk of their income in their 401(k)s and other investments, have a much smaller exposure to the sales tax.

If you think I’m delving into class warfare, I will only say this:

There can’t be class warfare in this country until the poor start fighting back.

Here is my favorite example of how class warfare currently works in our country:

A billionaire, a worker, and an immigrant are sitting at a table with 1000 cookies. The billionaire takes 999 cookies and says to the worker, “watch out, that immigrant is going to take your cookie.”

#2. Ann Richards is the worst thing that ever happened to Texas.

I’m not going to pretend to be an expert on Ann Richards. I’m not. I’m not going to defend her. However, after listening to this guy espouse about his libertarian belief for 15 minutes. Then listening to him call Ann Richards a bitch at least 5 times and tell us about how he celebrated her death, the only policy that he pointed out that was so terrible was that she repealed a law that made it legal to build a building that is taller than the state capitol building in Austin. That would be a libertarian policy. I’m not sure he actually knows what he is.

After doing our “horns down” gesture, we loaded back into the car and headed north. Hoping to get deep into the heart of Oklahoma before bedding down for the night.

This is your reminder that this week’s WEEKLY PHOTO CHALLENGE theme is TRANSPORTATION: