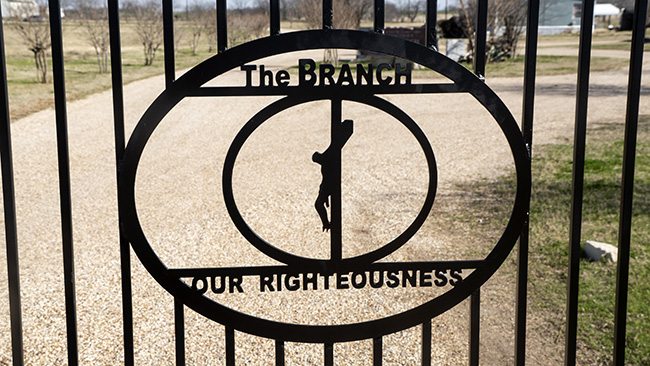 You see, we had stayed the night in possibly one of the worst places in the United States. If it wasn’t for Chip and Joanna Gains, Waco, Texas would have zero positive press.

When you say Waco, Texas people only think of a handful of things in no particular order:

1. Branch Davidians and their fiery end.
2. The Baylor football program and the scores of sexual assaults and rapes that they committed that were then duly covered up by the school, athletic department, and most disturbingly… the police department.
3. The 1916 lynching, torturing, burning, and mutilating of Jesse Washington. A lynching that was attended by in excess of 10,000 people.*
4. Baylor basketball player Patrick Dennehy being murdered by fellow Baylor basketball player Carlton Dotson.
5. FIXER UPPER

I wish I would’ve thought to go see the memorial to Jesse Washington, but it was forgotten. Sorry Jesse.

But being someone with an interest in history and more than a bit of a fascination with cults, there was no way we were going through Waco, Texas and not visiting the Branch Davidians and the site of the Waco Siege.

It is not a stretch to think that it was one of the most important historical events of the 1990s. It was an event that contributed to the dangerous rise of the alt-right and was directly responsible for the Oklahoma City Bombing. The deadliest domestic terrorist attack in American history. Killing 171 people. Including 19 children.

It is not overstated it to say that we would be living in a different America if the Waco Siege never happened. If you don’t know or don’t remember the Waco Siege, here is a brief synopsis from the Wiki:

The Waco siege was the siege of a compound belonging to the Branch Davidians, carried out by American federal and Texas state law enforcement, as well as the U.S. military, between February 28 and April 19, 1993. The Branch Davidians were led by David Koresh and were headquartered at Mount Carmel Center ranch in the community of Axtell, Texas, 13 miles (21 kilometers) east-northeast of Waco. Suspecting the group of stockpiling illegal weapons, the Bureau of Alcohol, Tobacco, and Firearms (ATF) obtained a search warrant for the compound and arrest warrants for Koresh and a select few of the group’s members.

The incident began when the ATF attempted to raid the ranch. An intense gun battle erupted, resulting in the deaths of four government agents and six Branch Davidians. Upon the ATF’s failure to raid the compound, a siege lasting 51 days was initiated by the Federal Bureau of Investigation (FBI). Eventually, the FBI launched an assault and initiated a tear gas attack in an attempt to force the Branch Davidians out of the ranch. During the attack, a fire engulfed Mount Carmel Center. In total, 76 people died, including David Koresh.

There is too much controversy and too much backstory to really do the Waco Siege justice. If you have questions about it, I suggest you leave them in the comments and I’ll answer with what knowledge I have and what opinions I possess.

What I will state definitively is that the Waco Siege was a terrible waste of life that could have been easily avoided. It is what happens when law enforcement tries to do things for public relations, rather than for… well law enforcement. They took their mistakes at Ruby Ridge and made them exponentially worse.

I’m sure these were some of my thoughts as we pulled up to the gate of Mount Carmel. One gate was open. There was a sign that said that you could get a look around the ranch for $10.

Shortly after we pulled into the ranch a truck came speeding up towards us. Considering where we were, was a little disconcerting. The driver rolled down their window and told us that we should hurry up to the chapel. They were giving a tour up there and we could make it if we hurried.

So we bypassed the building we thought we were supposed to pay at and headed up to the chapel.

Once we got there, there was a guy there telling the story of the Waco Siege. He wasn’t a member of the Branch Davidians in 1993, but now he researched the event with David Thibodeau** (one of the few to survive the fire).

He showed us pictures of the people that perished in the fire. He showed us “trophy photos” that the FBI took after the church (they are offended by the term “compound” because of its militaristic connotation) burned completely down. If you know any hunters, you know what a trophy photo is. You can imagine what you would feel like if people took trophy photos with the remains of your friends and loved ones.

He argued that David Koresh wasn’t even doing anything illegal. It isn’t illegal to stockpile and sell firearms. While it might (you can take out the might for me) be morally reprehensible to most of us to have sex with 14 year old girls, in Texas 14 year olds can be married with parental consent. Which David Koresh did have. Yeah. Gross. Texas, Do better.

Eventually the man (I can’t remember his name) left and we were introduced to Heather***. Heather really made this a special stop.

Heather was 9 years old during the Waco Siege. She was in Mount Carmel when the siege began. She was the last person to leave, days before the final assault that ended in the deaths of almost every Branch Davidian in the building. Including her father.

If you know the timeline of the Waco Siege, Heather’s dad was the mailman that was inadvertently tipped off to the ATF’s attack by a lost member of the media. This is why the ATF didn’t have the element of surprise. This is why the raid should have been called off.

Before he died, he gave her a teddy bear and told her that the bear would watch over her until he saw her again. Then he sent her out into the “Babylonian” world.

As she told us the story she paused and then said, “I didn’t know at the time that he meant, when we see each other in heaven.”

As she walked down the driveway, she expected to be shot in the head every step she took. Finally, she reached the end of the drive and was grabbed by the police. They took the teddy bear away from her and ripped it up.

This wasn’t done (completely) out of malice though. They were checking the bear for a bomb. There wasn’t one.

Tears rolled down her face as she told us this part of the story.

Then she said, “I never got the bear back.”

You could tell with the way she said it that it still hurts that the last thing her dad gave her. The thing that was supposed to “watch over her” was taken from her, destroyed, and never returned.

She wiped the tears off her face and apologized for crying.

We told her not to apologize and thanked her for sharing such a memory to people who were basically tourists in her pain.

Then she offered to give show us the rest of the grounds.

The current chapel was built in the same place as the chapel that was burnt down. 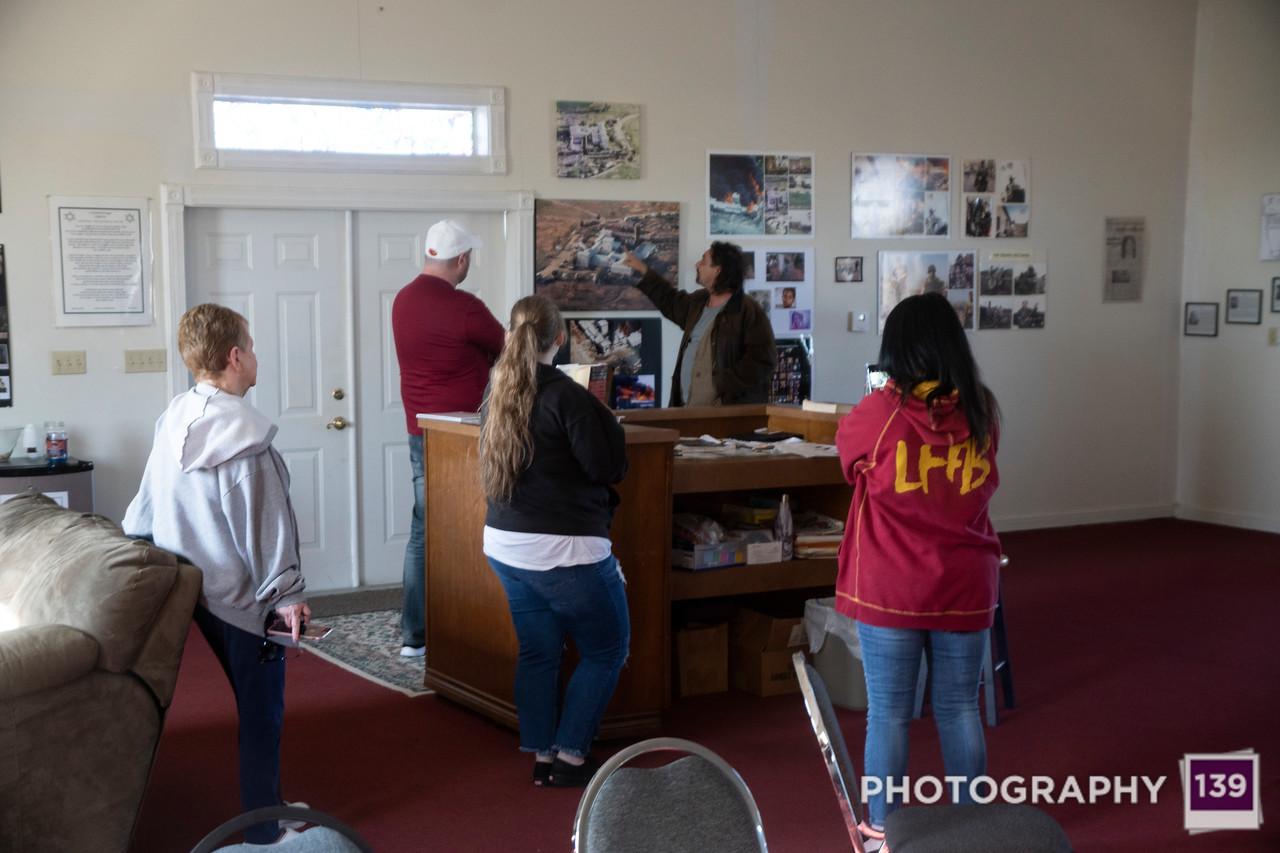 Pointing out the “Trophy Photos”.

Heather is seated in the lower right hand corner.

David Koresh thought he was the second coming of Jesus, but this time he wasn’t sinless.

Bill Clinton was president during the Waco Siege.

People were trapped in this storage room. 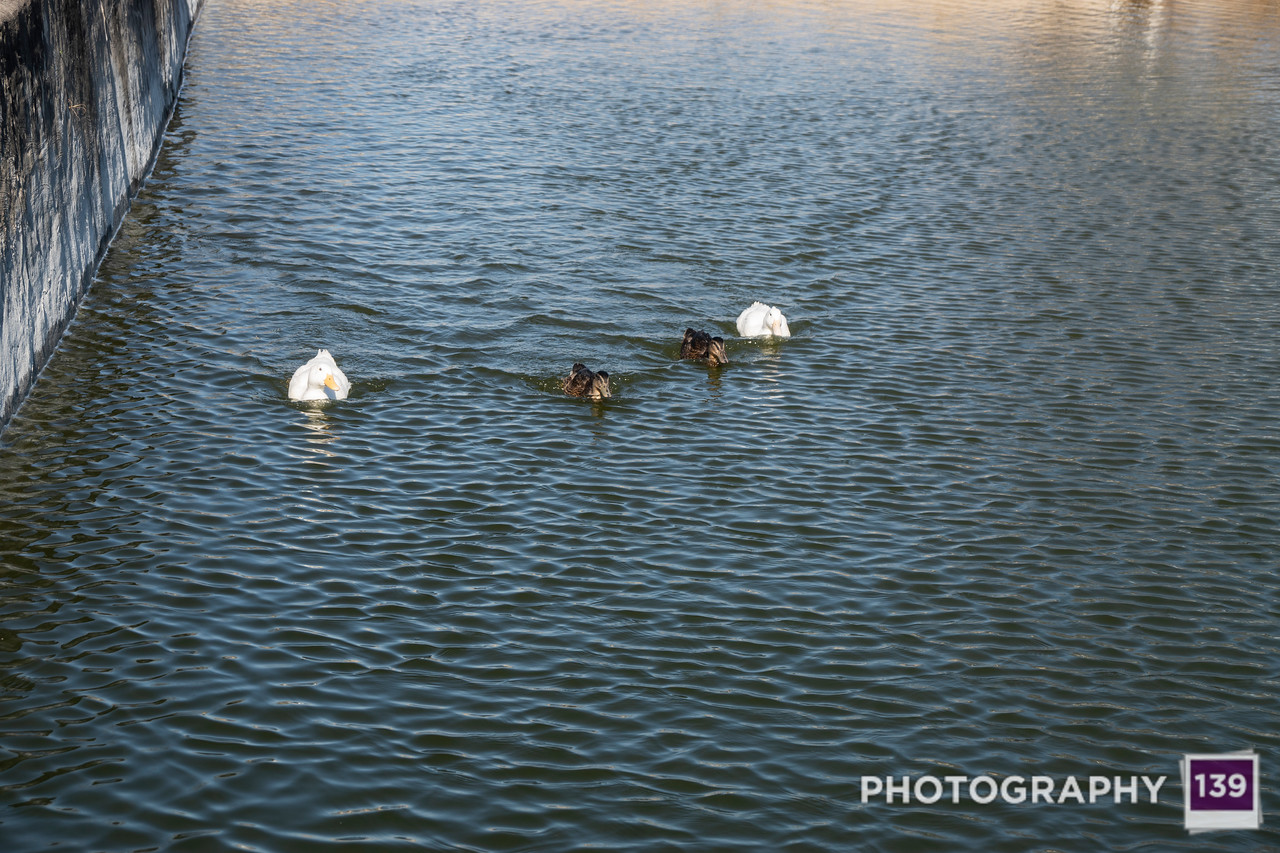 They built this pool the year before the Siege. They got to use if for 1 year.

Heather was really cold. It wasn’t cold for Iowans with plenty of built in insulation. 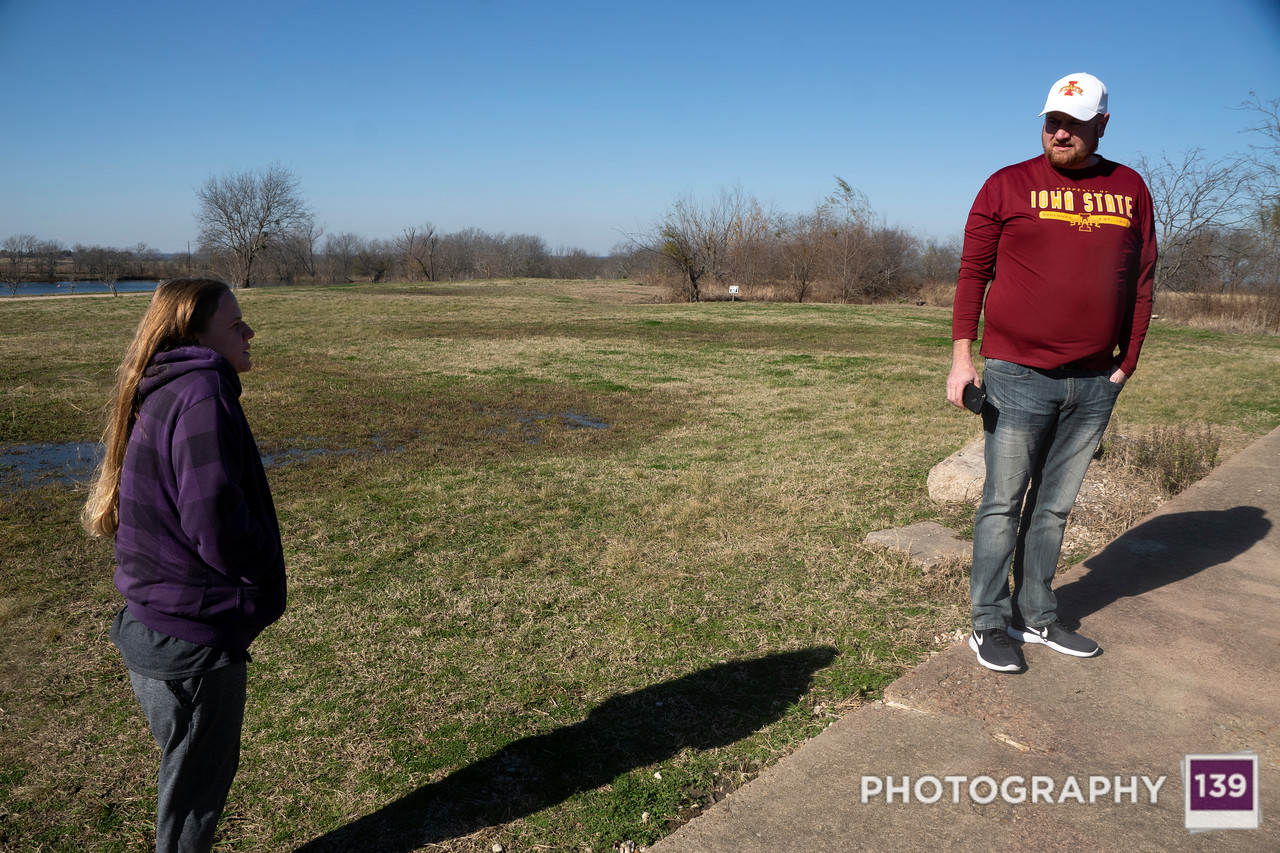 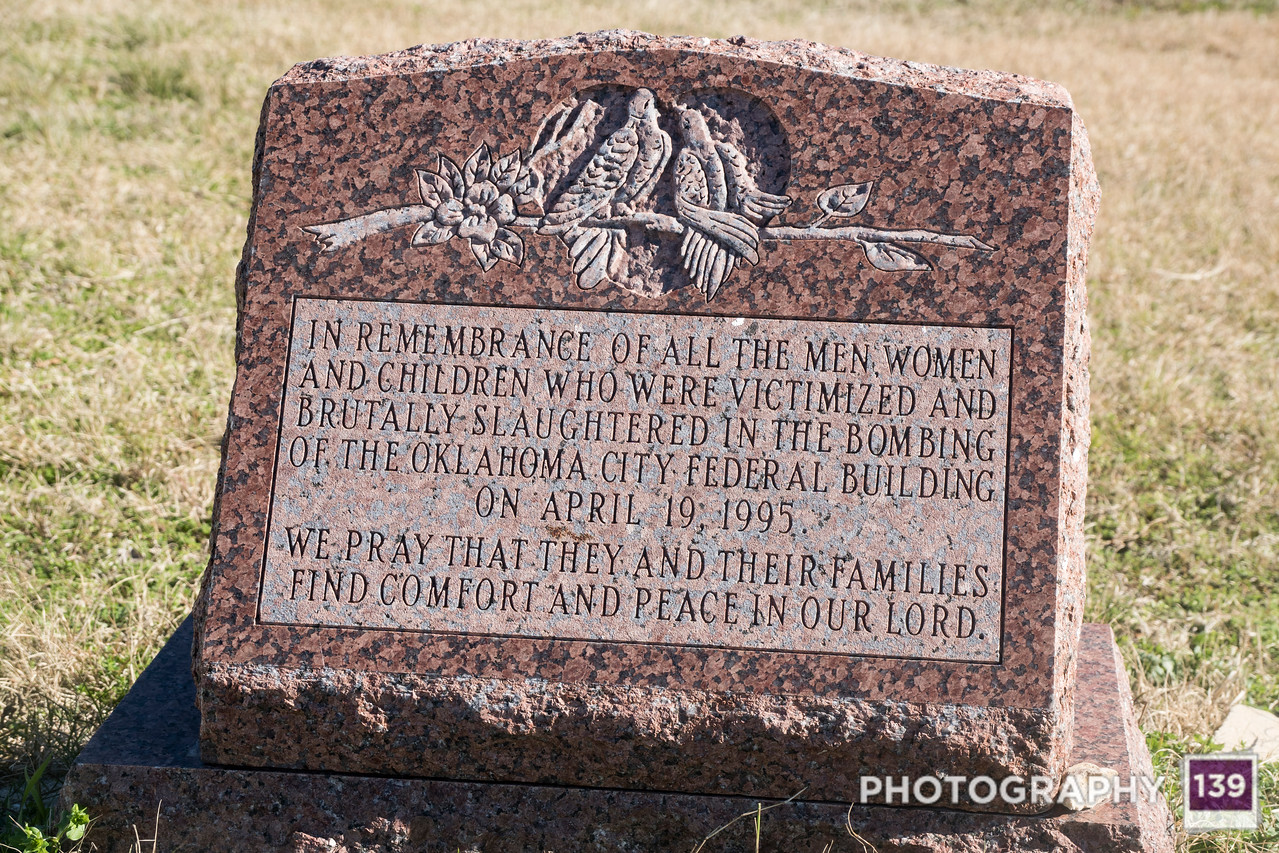 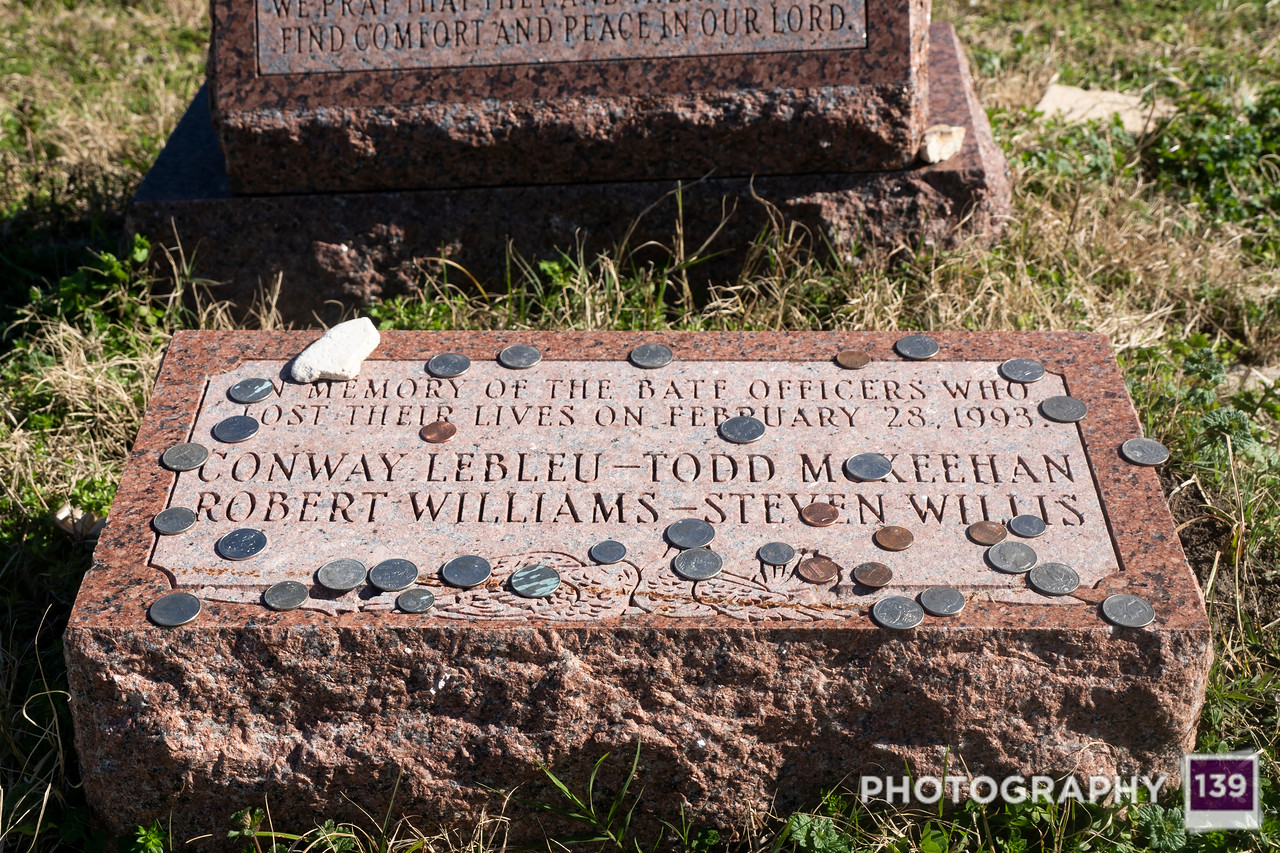 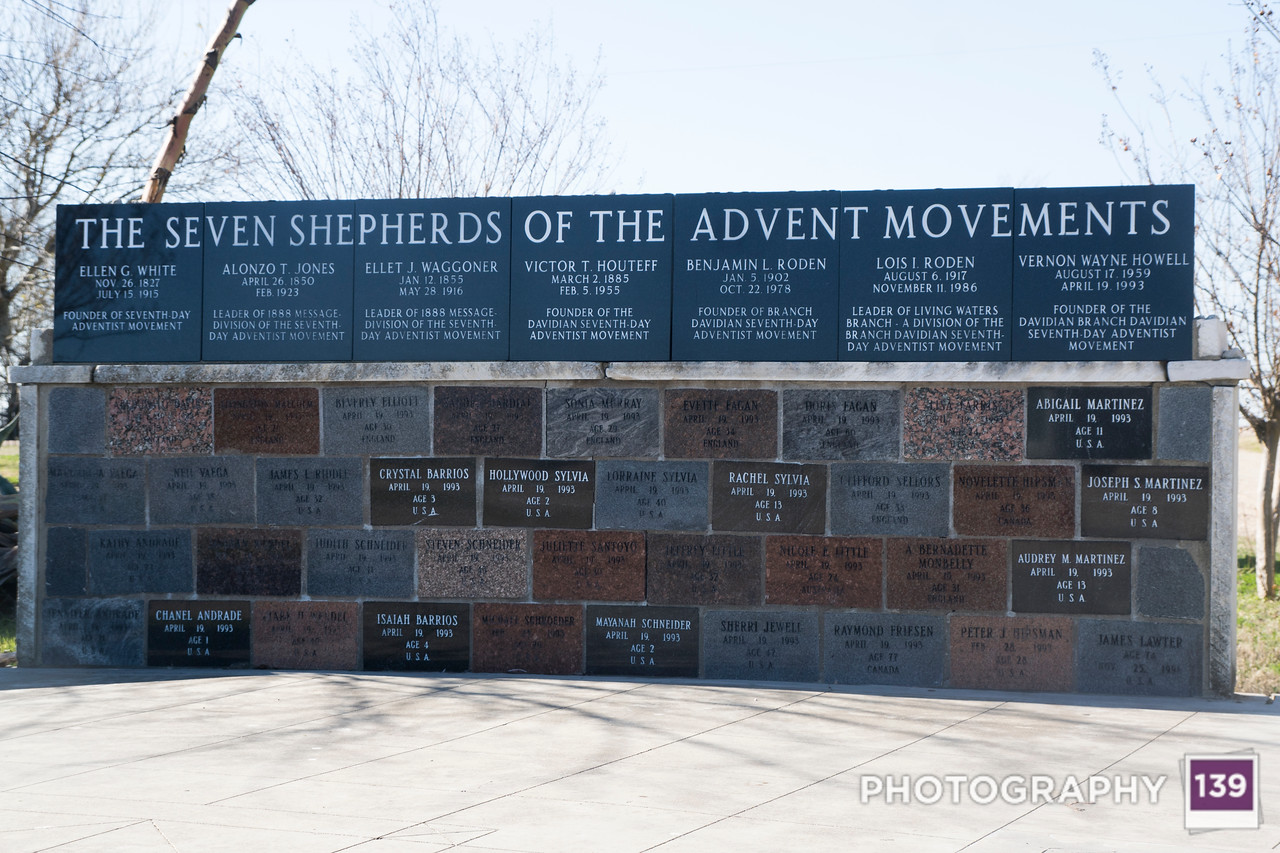 Branch Davidians are an offshoot of Seventh Day Adventists.

The road outside of Mount Carmel. 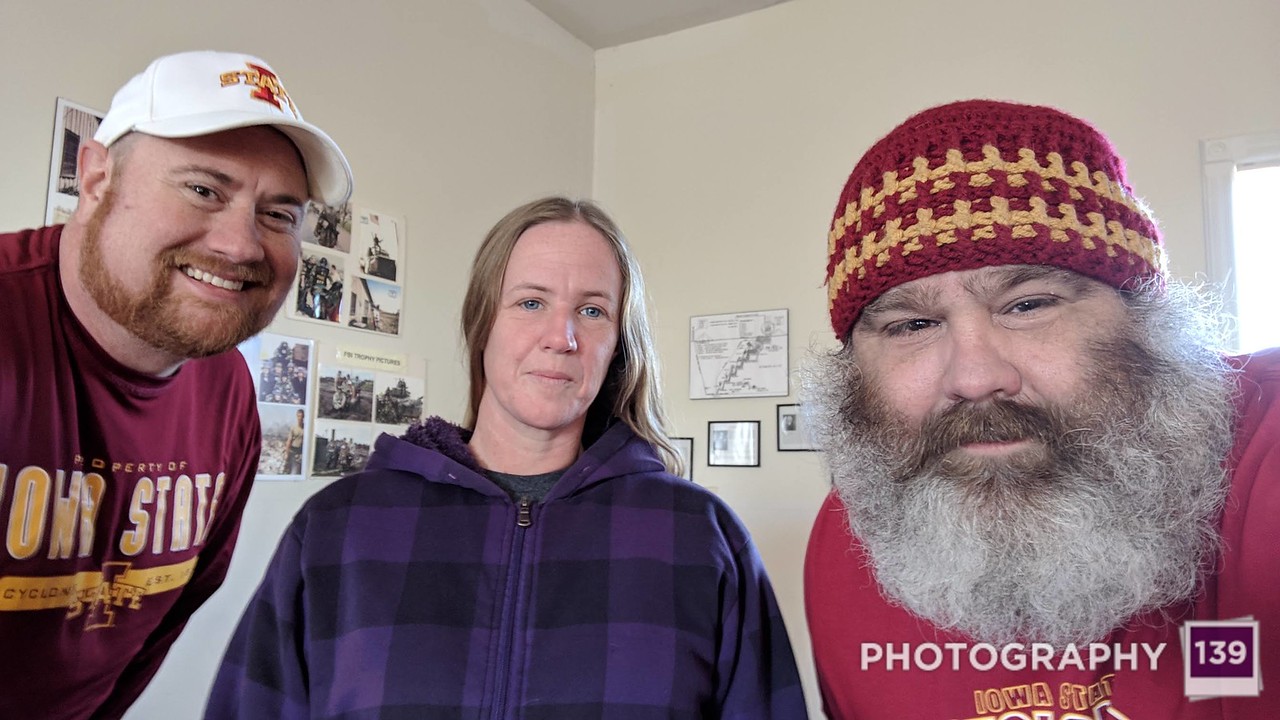 During the tour Heather didn’t say anything positive about David Koresh. She talked about how he separated her from her dad and took over her discipline.

As a child Heather was pigeon-toed. He used to make her walk back and forth the length of Mount Carmel. He would hit her with a stick when he felt she was walking pigeon-toed.

If David Koresh would have stayed alive and remained in power, she would have become one of his wives when she turned 14.

Mount Carmel burned down when I was in high school. We watched it in class. I have seen at least 5 documentaries on it. I have seen a movie on it. Willy and I watched the WACO television show last year. The tragedy of what happened there didn’t really hit home until I was standing on the same ground where it all happened. It is something I will never forget.

We thanked Heather again for sharing and giving us a tour. I felt like a doucher, but I asked for a picture with her. She obliged willingly. She asked us to friend her on The Facebook. This made me feel like less of a doucher.

I broke my 2 month absence from Facebook long enough to become her friend on The Facebook, but I haven’t been back since. If I ever get the stomach to return, I’ll hit her up and see if she remembers us and see how she is doing.

We gave her a hug. Loaded back up in the rental and left Waco profoundly changed in a way that is hard to figure. My best guess is that it would be the way you would change if you saw the Vietnam War Memorial with a veteran of the Vietnam War or if you talked to a holocaust survivor or met somebody that was in the towers on 9/11. Something that was merely academic, was suddenly real.

We were a couple hours from San Antonio and several hours from the kickoff, but the game seemed decidedly less important than it did just an hour or so earlier.

This is your reminder that this week’s WEEKLY PHOTO CHALLENGE theme is RUINS.

A RUINS photo is a picture of something that is in decay.

*If we ever have Youth Group again, we will briefly discuss the lynching of Jesse Washington
**David Thibodeau is the survivor that wrote the book that part of the television show WACO is based on. He was played by Rory Caulkin in the show. I can’t recommend that show highly enough.
***Heather is featured in a documentary about the Branch Davidians that aired on A&E in 2018. I have procured a digital copy of it. If you ever want to watch it, I can arrange it. But you have to ask nicely.