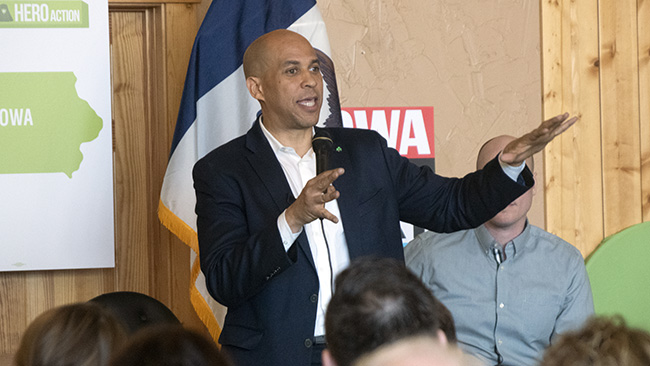 It has been awhile since I made some progress in my personal quest to meet, photograph, or at least see in person the politician that will take office as the next President of the United States in 2021.

However, I made it out last Sunday to the Prairie Moon Winery with Angie to see Cory Booker speak.

Here is a little information on Cory Booker from the super reliable Wikipedia:

Cory Anthony Booker (born April 27, 1969) is an American politician serving as the junior United States Senator from New Jersey since 2013 and a member of the Democratic Party. The first African-American U.S. Senator from New Jersey, he was previously the 36th Mayor of Newark from 2006 to 2013. Before that, Booker served on the Municipal Council of Newark for the Central Ward from 1998 to 2002. On February 1, 2019, he announced his campaign to run for the Democratic nomination for President of the United States in the 2020 United States presidential election.

As senator, his voting record was measured as the third most liberal.[1] Considered a social liberal, Booker supports women’s rights, affirmative action, same-sex marriage and single-payer healthcare. During his five years in office, Booker co-sponsored and voted for the Employment Non-Discrimination Act (2013), tougher sanctions against Iran, sponsored the Bipartisan Budget Act (2013), voted for the National Defense Authorization Act (2014), co-sponsored the Respect for Marriage Act (2014) and led the push to pass the First Step Act (2018). In 2017, he became the first sitting senator to testify against another when he testified against Attorney General nominee Jeff Sessions during his confirmation hearing. In April 2018, following the FBI raid on the offices of Michael Cohen–U.S. President Donald Trump’s personal attorney–Booker together with Chris Coons, Lindsey Graham, and Thom Tillis, introduced the Special Counsel Independence and Integrity Act to limit the executive powers of Trump.

Cory Booker is easily the best orator that will run for President in 2020. His speeches eloquently intertwine quotes from The Bible and poets like Langston Hughes and Maya Angelou and historical figures like Martin Luther King Jr.

He often uses this line in his speeches:

The lines that divide us are nowhere near as strong as the ties that bind us. When we join together and work together — we will rise together.

At the event was also J.D. Scholten and the founder of Working Hero Action Joe Sanberg. 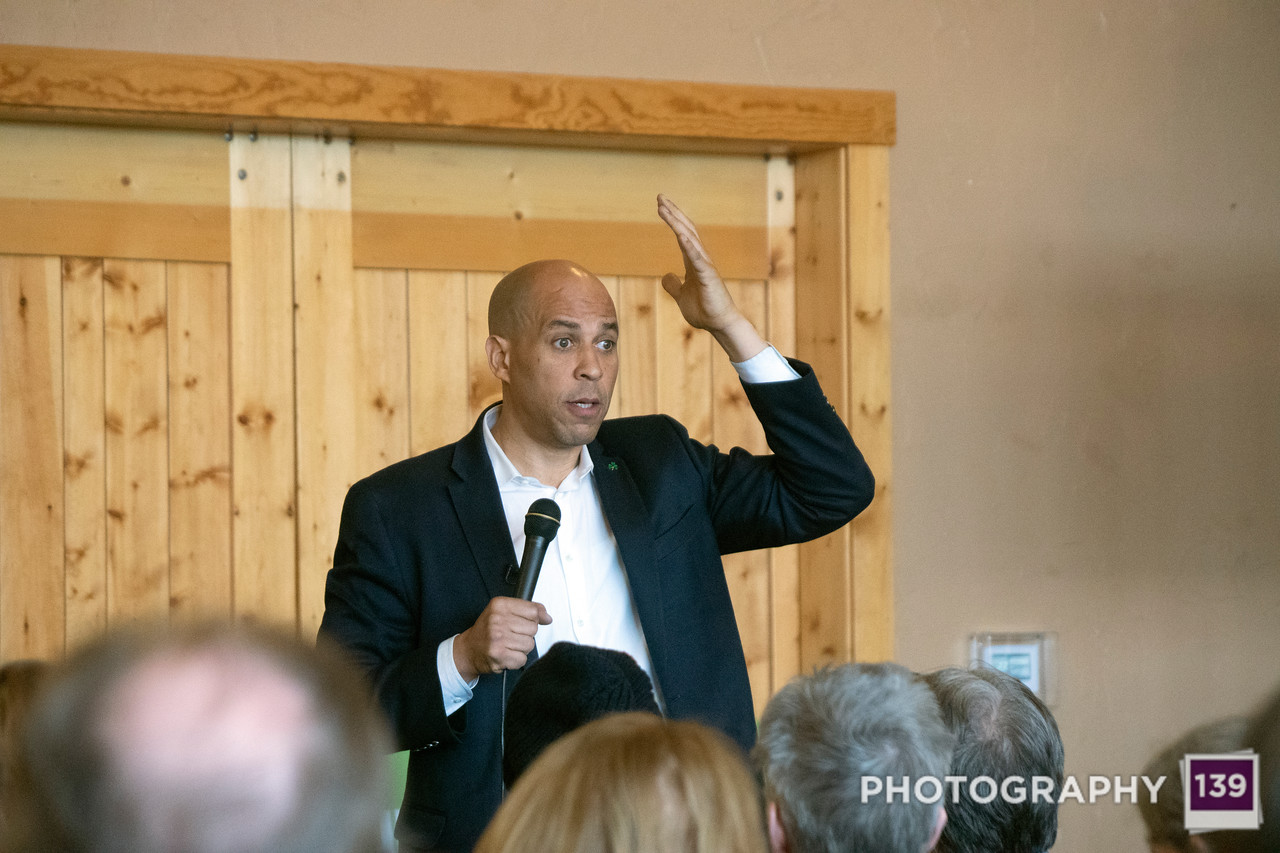 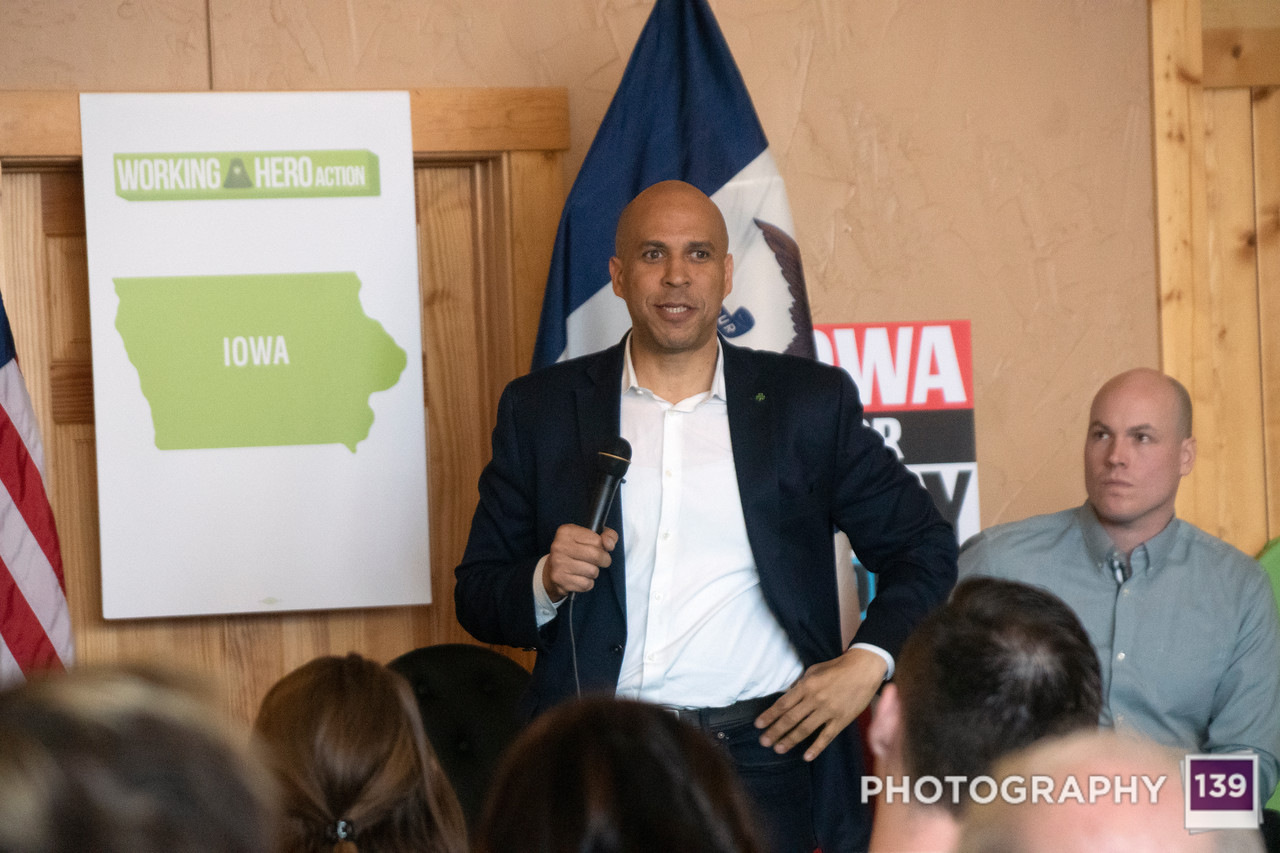 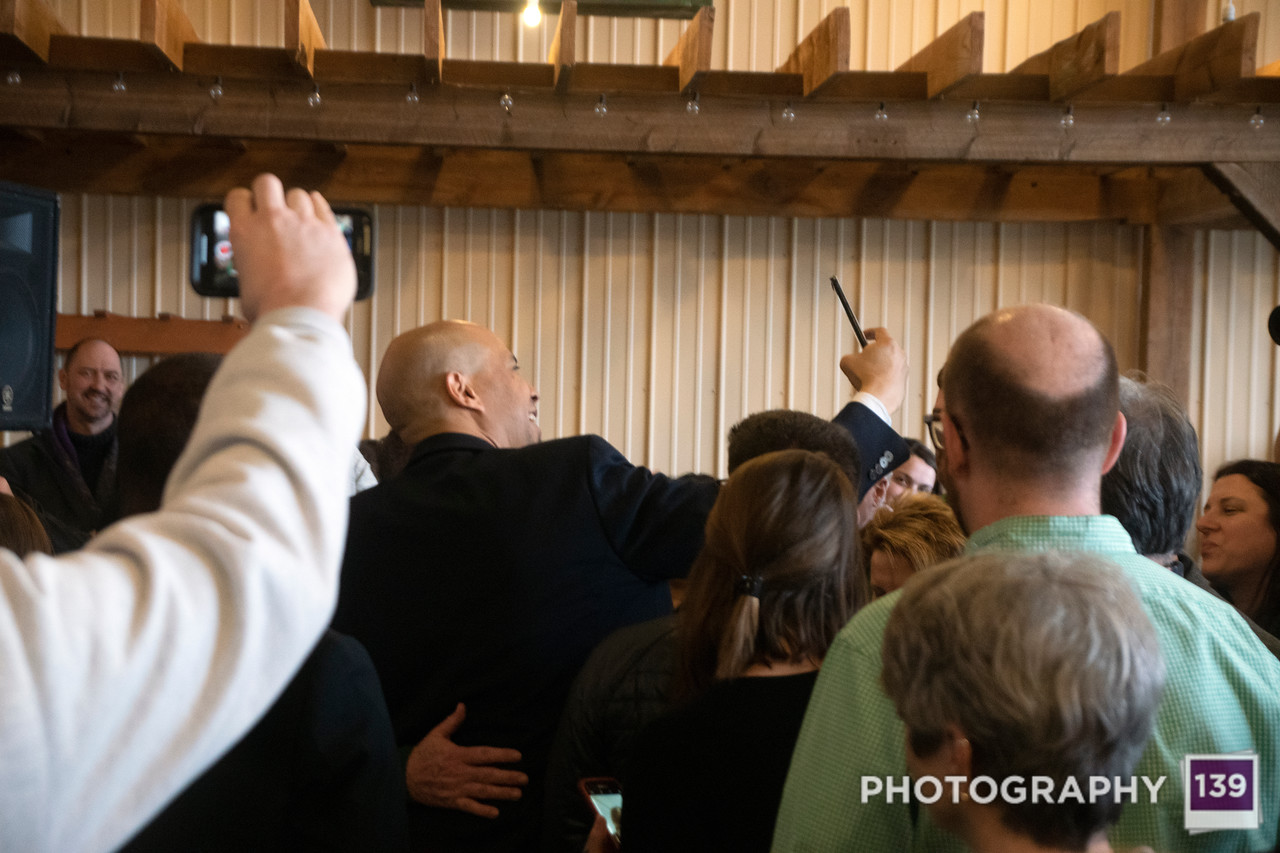 I badly underestimated how many people would be there to see Cory Booker because he isn’t doing all that well in the polls. However, there was a standing room only crowd there. Since I got there kind of late, I had to sit in the last row. I only got that seat because Angie got there before I did and saved me that seat. So I the pictures of Cory Booker are what they are.

He was able to intertwine “Still I Rise” into his speech:

You may write me down in history
With your bitter, twisted lies,
You may trod me in the very dirt
But still, like dust, I’ll rise.

He was also able to intertwine “There Is A Dream In The Land” into his speech:

There is a dream in the land
With its back against the wall
By muddled names and strange
Sometimes the dream is called.

There are those who claim
This dream for theirs alone–
A sin for which we know
They must atone.

Unless shared in common
Like sunlight and like air,
The dream will die for lack
Of substance anywhere.

The dream knows no frontier or tongue,
The dream, no class or race.
The dream cannot be kept secure
In any one locked place.

This dream today embattled,
With its back against the wall–
To save the dream for one
It must be saved for all.

When you hear Cory Booker speak, it will not surprise you to learn that he almost went to divinity school instead of law school.

Cory Booker stayed after his speech and took pictures with and recorded videos with everybody that wanted some of his time.

I’m not sure what presidential hopeful I will see next, but I have my ear to the ground.