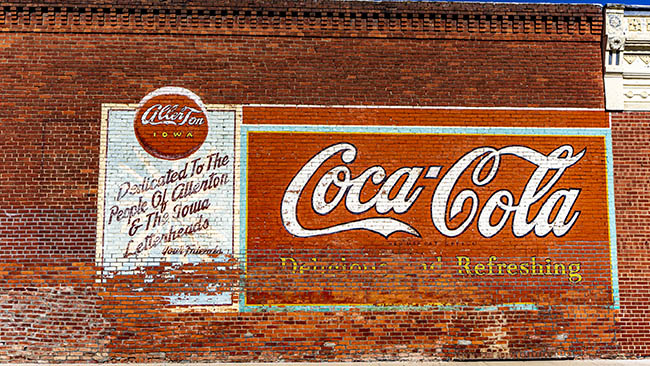 Several months back I cruised around Decatur County and Wayne County with Vest harvesting their town signs. This is the second collection of auxiliary images I took on this trip.

There are a couple of images I want to single out. These pictures of murals I took in Allerton, Iowa:

While I was doing a little research on the Coca-Cola mural trying to discover who the Iowa Letterheads are, I discovered a very interesting group. These murals were painted in 1993 by a group call The Walldogs. The Walldogs is a group of mural painters that once a year go to a town and paint a bunch of murals there. Allerton, Iowa was the first town they ever did this at. According to their website, (thewalldogs.com) they are going to be in Paducah, Kentucky this year. Which is really close to where Ernie lives. They are also going to return to Allerton, Iowa in 2023. If this schedule holds, I will definitely look into checking this out.

This is the type of thing I wish our Art Council in Boone would have looked into, before they got broken up when one member assaulted another member.

Here are the rest of the pictures from Volume 2 of this road trip: A little bit of history on George Saling from the Prairie Tails Museum:

George Saling Brings Home the Gold!!!
In August 1932 headlines in newspapers around the country repeated this message as George Saling, Corydon won both a gold and bronze medal as part of the United State Olympic Team.

George Saling a senior at the University of Iowa was considered among the hurdling greats of the world in 1932. He set records in many meets that year, including Drake Relays with a record setting time in the high hurdles of 14:4 seconds. In the National Collegiate championships he set a new record at 14:1, this was also a world record.

In the first heat of the Olympic hurdles Saling came in second to Don Finlay of Great Britain. He opened up in the second heat and broke an Olympic record at 14:4.

In the final heat an Olympic championship at stake, the competitors took off at the shot in a life and death race. And Saling won, this time in 14:6 in the 110 meter high hurdles winning the gold medal. In fact the USA team took home both gold and silver.

Saling wrote this of his experience: “Down on the track, six forms are crouching – by trials the six greatest hurdlers in the world. The gun barks and the forms shoot forward. They take the first barrier almost in unison. Then one runner draws into the lead. Closely pressed by the pack, he is still leading at the seventh hurdle. “At the eighth barrier a runner emerges from the pack. He overtakes the leader, and then sweeps on by and to the tape – a victor by four feet. That runner was myself, and I say without shame that this is the ONE race of the Olympics that shall remain longest in my memory.”

George Saling was born in 1909 in Memphis, MO. The family moved to Corydon when he was three months old, where he graduated from high school in 1927. George’s first love was basketball and he was captain of the Corydon team in 1926-27.

He went out for track, partly because that was what most of the other fellow did in the spring. In meets he usually filled in wherever he was needed most, running anything from the 100 to the 440, besides hurdles.

In the fall of 1927 he began classes at the University of Iowa and turned his ambitions toward basketball. But in an interview given just two weeks before his untimely death in 1933, George said, “Just as I was swinging off the court after practice one night, and still possessing a little of that youthful exuberance, I raced over a couple of hurdles that were standing nearby, as George Bresnahan, U of I track coach happened to be passing.”

Coach Bresnahan spotted Saling’s natural gift for the hurdles and immediately began an intense campaign to recruit George away from basketball and on to the track team. Saling credited his coach for much of his success. His training methods included a lot of body building – lifting weights, working on bars, and sprinting. One unusual exercise that proved to be very helpful was walking on his hands, which developed arms, back, and chest, and gave him a finer sense of balance – a necessity for hurdlers.

Corydon and the track world were stunned by the untimely death of George Saling on April 14, 1933 as a result of a car accident near St Louis. He was just 23 years old. The funeral service at the Methodist Church in Corydon was one of the largest ever held in Corydon.

George Saling’s memory was honored by his hometown high school in 1938 when its newly lighted athletic field was dedicated as “Saling Field”. In 1983, during Corydon’s Old Settlers Celebration, Saling was honored in a special ceremony and a bronze plaque honoring his Olympic Gold Medal was mounted on the east side of the bandstand on the Wayne County courthouse grounds. In 1989, the University of Iowa established an Athletic Hall of Fame: George Saling was one of the athletes and coaches named.

There is still one more collection of pictures from this road trip left to share.