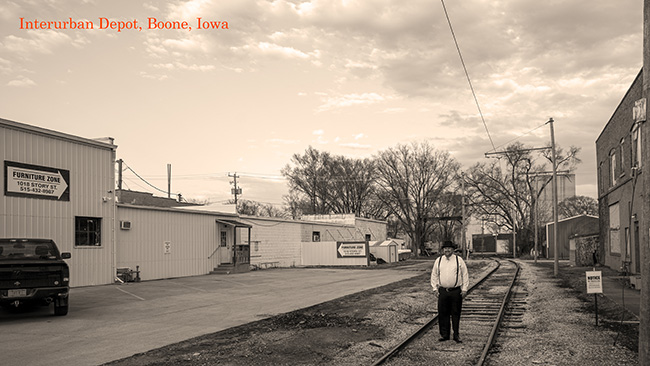 I did want to make a personal announcement of minor consequence. Today, my credit card balance is officially back to zero. I didn’t have much credit card balance, but it hadn’t been back down to zero for a few years. Here is the happy moment:

So the only person that has anything on me is my mortgage company. At least until my next car purchase, but that is probably about 2 years away.

The old Boone depot doesn’t exist any longer, so I had to do a little bit of research to figure out where it once was and I had to do that research because I thought I knew where it was, but I was wrong. I knew it was on Story Street, but I thought it was on the west side of the street and on the south side of the tracks. Where the current Boone & Scenic Valley Railroad Downtown Depot stands. However, it was actually on the east side of Story Street and the north side of the railroad tracks. I deduced this by looking at addresses in old phone books, a video on YouTube of trains on the line from 1950-55 and also, I confirmed it with my Mom, who used to ride the Interurban to visit family in Fraser as a kid.

Here is some historic information on this railroad from American Rails.com:

The Fort Dodge, Des Moines & Southern Railway (reporting marks FDDM) was officially incorporated during the first decade of the 20th century to serve the state capitol of Iowa with points north as an interurban road. However, the history of its line dates as far back as the 1880s, as a standard rail line moving coal from mines in the northern regions of the state. In many ways the FDDM&S (or sometimes referred to as the FtDDM&S or just as its slogan, “The Fort Dodge Line”) never acted like a true interurban although it was once electrically operated and used trolley/interurban equipment. Freight was just as important as passengers and this concept allowed the company to thrive for many years, well after the interurban industry collapsed after the 1920s despite its very high operating ratio. Eventually, the road dieselized and was acquired by the Chicago & North Western in the late 1960s which promptly abandoned it less than 20 years later. Today, part of the route is operated by the Boone & Scenic Valley Railroad.

The earliest beginnings of the Fort Dodge, Des Moines and Southern Railway started with the Crooked Creek Railroad, a three-foot narrow-gauge line chartered in 1875. The CCR would complete an eight-mile route from Judd, near Fort Dodge and a connection with the Illinois Central, to Lehigh and a cluster of coal mines. Ten years after it began the CCR upgraded its route to standard-gauge and shortly thereafter in 1892 it purchased the Webster City & Southwestern Railroad. The WC&S was another coal hauler, connecting to the CCR and running 14 miles east to Webster City. These two railroads essentially made up the northern lines of what would later become the FDDM&S. To the south, in 1893, another predecessor was chartered, the Boone Valley Coal & Railway Company.

This system, also a coal hauler, built a small line serving mines near Fraser (northwest of Boone) to nearby Fraser Junction and a connection with the much larger Minneapolis & St. Louis Railway. In 1899, the owners of the BVC&R chartered the Marshalltown & Dakota Railway as an additional coal route with high aspirations of pushing this system from Newton (east of Des Moines) to Sibley, Iowa in the state’s northwest corner. Along the way the line would pass through towns such as Fraser, Story City, Gowerie, and Rockwell City. In 1901 it was renamed as the Boone, Rockwell City & Northwestern Railway, and again in 1902 as the Newton & Northwestern. By 1905 the line was opened from Newton to Rockwell City and also had a branch to Colfax. While over 100 miles in length it never made it any further towards Sibley. New owners acquired the N&NW in 1905 and again renamed property, this time as the Fort Dodge, Des Moines and Southern Railroad.

While the FDDM&S continued to concentrate on coal it also began to focus on the movement of gypsum near Fort Dodge and general industry located around Des Moines. Additionally, its owners began looking at electrifying part of the railroad as an interurban. It remained focused, however, on freight and in 1906 purchased the Ames & College Street Railway to serve that town. After completing an extension from Hope to Fort Dodge, and establishing an interchange with the Des Moines & Central Iowa it now had a through route between both of the state’s major cities (easily Iowa’s largest interurban). Service along the entire route opened on November 4, 1907. Soon after, its owners realized that the the N&NW’s route from Newton to Rockwell City offered a non-sustainable freight potential and decided to electrifying only part of the route between Hope and Midvale on a 1,200-volt, DC system.

In 1911 the Midvale to Newton section of the N&NW was abandoned and much of the entire FDDM&S route was electrified to some extent. Small editions continued to be added, including a branch from Kelley to Ames (which finally directly connected its Ames & College Street subsidiary) and the purchase of the aforementioned Crooked Creek Railroad in 1916. This route was also energized. For freight service the railroad utilized second-hand General Electric-built freight motors (it acquired more beginning in 1942 from the Oregon Electric) and used Niles Car & Manufacturing Company interurban cars for passenger operations. Part of the reason for the road’s success was not only due to its freight traffic but also had numerous interchange partners (sometimes in more than one location) with Class I lines including the Milwaukee Road, Illinois Central, Chicago & North Western, Burlington, and Rock Island.
The Great Depression hit the line hard and it fell into receivership in 1930, emerging in 1942 as the Fort Dodge, Des Moines and Southern Railway. Beginning in 1954 the FDDM&S began dieselizing its motive power roster while at the same time ended virtually all of its remaining passenger services (branch line services began to be discontinued as early as 1926). Its diesels consisted almost entirely of General Electric products, 44-tonners and 70-tonners along with a Plymouth 65-ton switcher. In 1955 the railroad was purchased by the Salzburg family, which owned a number of shortlines including the Louisiana & North West and Wellsville, Addison & Galeton.

By the 1960s the railroad had cut back to its main line between Des Moines and Fort Dodge with the eastern extension to Webster City. It also was still operating a remaining section of the N&NW between Hope and Gowrie. In 1968 the C&NW acquired the FDDM&S from Salzburg and, unfortunately, was not kind to the road. It immediately began cutting back services and by 1983 was looking to abandon the entire Fort Dodge-Des Moines route. Part of the system, a 12-mile section between Wolf and Boone was spared, and is now operated as the tourist line Boone & Scenic Valley Railroad.

That is a lot of history to digest. I found 3 postcards of the old depot and it is a shame that it was torn down. It might not have been a beautiful building, but it was interesting. I hope that somewhere the big concrete Boone at the top of the depot has been preserved, but I’m sure it was probably destroyed with the building.

I decided to only recreate 2 of the 3 postcards, because 2 postcards of a building that doesn’t exist is enough. I also created a modern interpretation of a postcard of the Boone & Scenic Valley Railroad’s downtown depot:

Next time we check in with THE POSTCARD RECREATION PROJECT, it will involve some Boone churches.

This is your reminder that this week’s THE WEEKLY PHOTO CHALLENGE theme is PICTURE IN PICTURE: 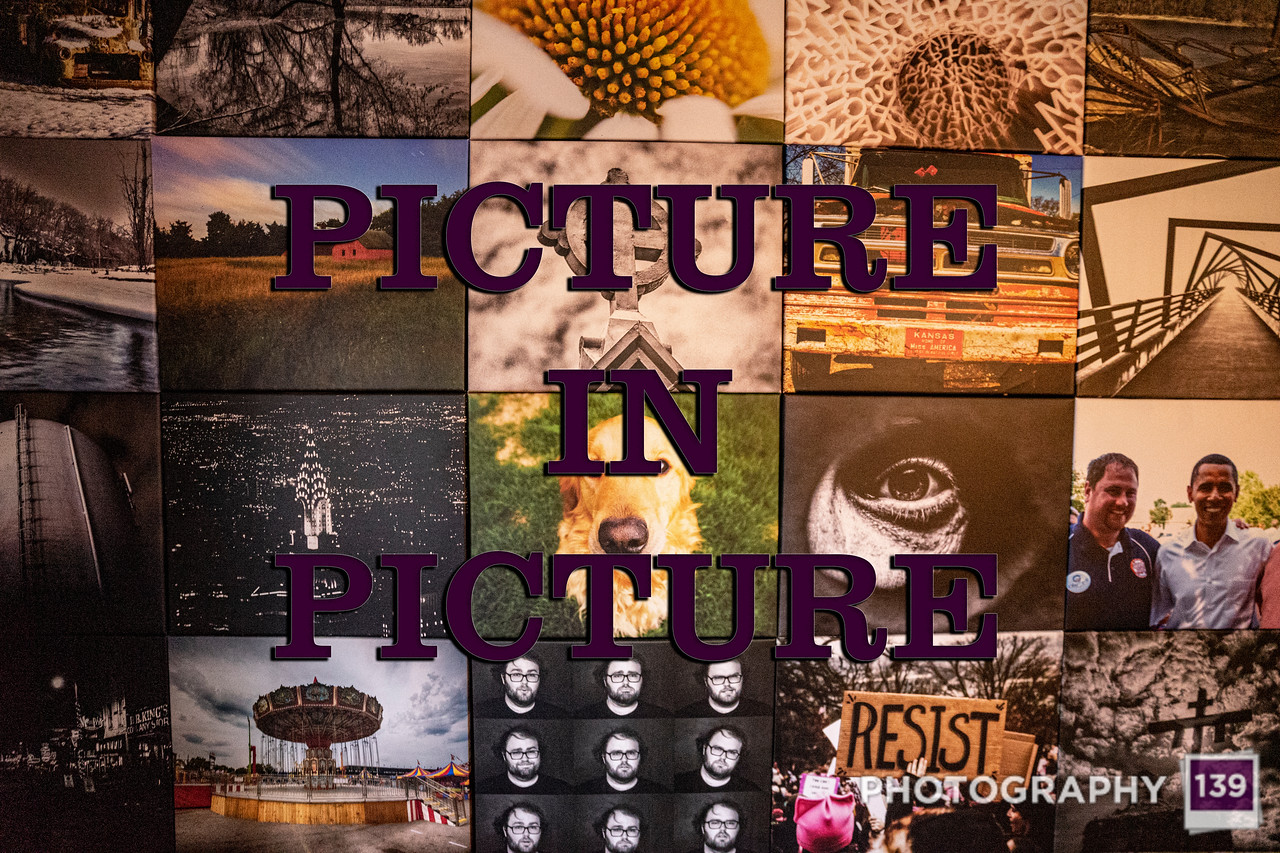 A PICTURE IN PICTURE image isn’t just an outdated feature on a television (maybe it still exists but I haven’t used it since 1983), but it is an existing picture(s) put in your PICTURE. There are several ways to do this. One is simply to photograph an photograph that is on your wall. Another way to do this is grab a box of old prints (for you young bucks, people used to get their pictures “developed” and printed on photo paper) and spread them across a table or floor and take a picture of it. You can organize them in a way that makes sense to you, or just spread them out and enjoy the chaos. Another way to do this would be to open up a folder of images on your computer and use the Snipping tool to create an image of digital thumbnails. I’m sure there is also a way to do this on a Mac, but it probably involves paying an extra $200 for less functionality and a cute little fruit logo. Hopefully, you will find away to take an old picture and find a new way of thinking about it.

Let me just throw this out there… Photomosaic?!?!?

Think about the following quote by Ansel Adams when composing your image:

There are always two people in every picture: the photographer and the viewer.
-Ansel Adams

In this project, you are both the photographer and the viewer, even if you weren’t the photographer of the initial image. Meditate on that and I have no doubt you will create a great PICTURE IN PICTURE interpretation.