So most of the 2007 Calendars have been printed, laminated and bound. There are just a few left that need to be distributed. If you still want a calendar and didn’t get your order in, better let me know. Because 2007 begins in 13 hours and every day that a calendar comes late, it depreciates in value.

Below is a little bit of a look at what you would get by “purchasing” a calendar. 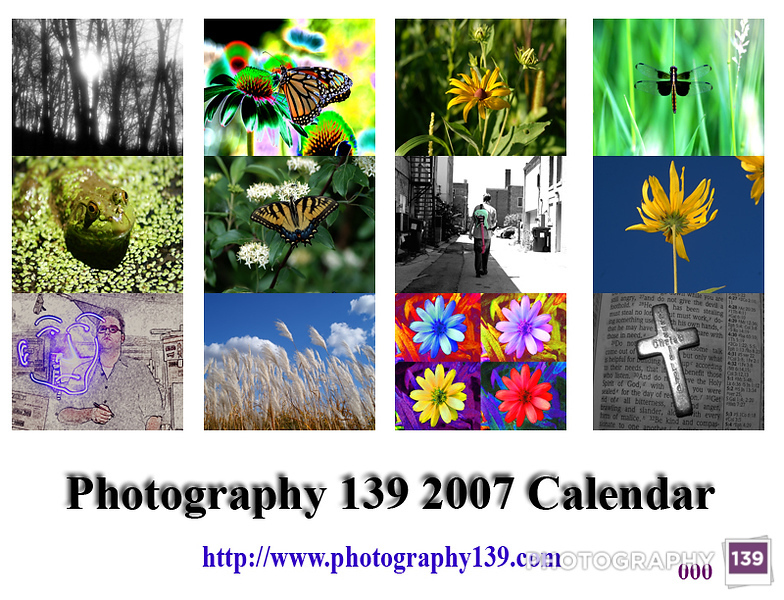 I would just like to impart a small bit of information about why each month was selected.

I selected this image because it was the most wintery of the images that I have selected. It definitely leaves you with a cold feeling.

I made this image exclusively for distribution with this calendar and I don’t like it, so it will remain an Unnamed Butterfly Image.

March Image – Flower in a Ditch

March begins the Northern Hemispheres return to life. Therefore, this is the first of many traditional nature images.

April is a month traditionally oversaturated with rain. I went a little crazy with the exposure compensation on this image. Make it a bit oversaturated by traditional photographic estimations.

Traditionally I put my favorite image in May irregardless of whether or not I think anybody else will enjoy it in the slightest bit.

The end of the traditional nature images.

July Image – Outburst of the Soul

August is a great month for wildflowers.

September – Portrait of the Artist as a Middle Aged Man

The only fall looking image of the bunch so it went in a fall month.

Olivia’s birth month. My auction image from Songs for Olivia.

A Christian image for the month of Christmas.

Not much info there, but enough for the intellectually curious.