Just thought I would jot down a few quick thoughts. 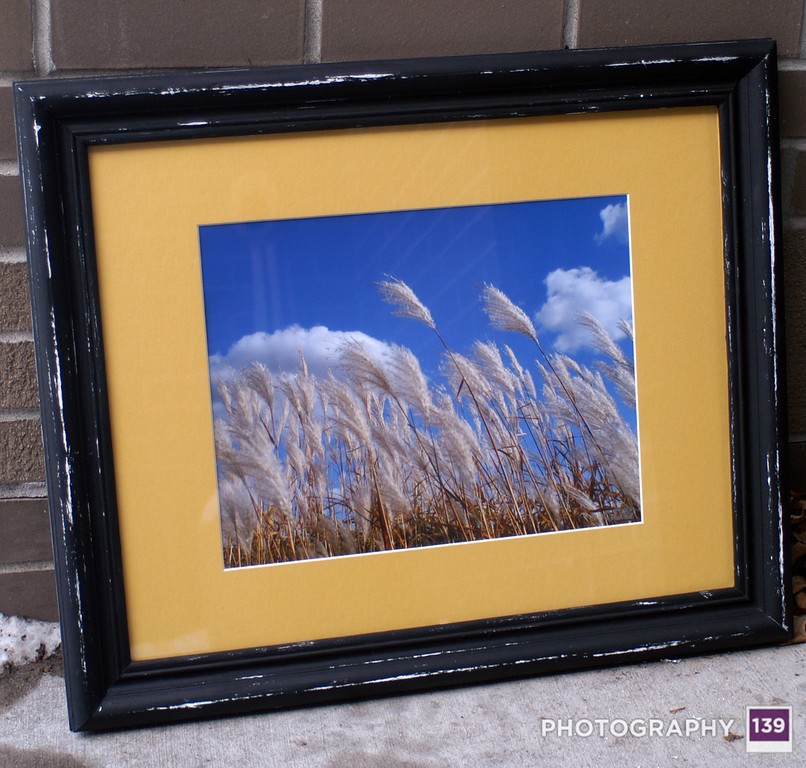 Okay . . . so one could make the case that painting a frame and matting a picture hardly constitutes a “craft”.

I’m not the craft police, but I did do this on Craft Night. I even finally decided on a name for this picture: “Last, Loveliest Smile”

This picture will soon be displayed in Salon 908. You could say that it will be on “Public Display”. I won’t because I’m not that pretentious. I’ll just say that it is hanging on a wall where people I don’t know might gaze upon it lovingly or in disgust.

I have to give credit to my sister Teresa. She was right about something. A few weeks ago at Supper Club we ate at Es Tas! It was terrible. Teresa recommended that we go to the West Street Deli instead. We ignored her sage advice and paid a pretty hefty price. Namely the worst french fries I have ever forced down in my life. Yesterday I met Teresa for lunch and we hit the West Street Deli. I ordered a club sandwich. It was tremendous. I don’t have the words to describe the greatness of this sandwich. Instead, I will steal a poem from Coleridge to encapsulate my feelings about this sandwich.

Where true Love burns Desire is Love’s pure flame;
It is the reflex of our earthly frame,
That takes its meaning from the nobler part,
And but translates the language of the heart.

That pretty much says it. One tasty sandwich!!! As some of you may or may not know, I bowl (very poorly) in a Monday night league. Even by my abysmally low standards I have been in a bit of a slump lately. In fact, going into Monday night I had not won a single game since before Christmas.

On Monday night I found myself matched up with Shaun Wirtz. Is he better than me? Certainly, but this is not an insurmountable task. Yet, he thoroughly thrashed me in the first 2 games, extending my losing streak to 9 games. I stood on the threshold of a double digit losing streak. So I dug deep inside and told myself: “You can not lose this third game. If you do . . . eh, whatever.”

With my new personal “whatever” mantra fueling me, I powered my way to a 10 pin victory. Of course, he won the series, but I left the bowling alley a winner. A winner of 1 of my last 11 points, but a winner nonetheless. Well maybe a little “theless”.

Tuesday night I went to see “Running with Scissors” with Stephanie and her friend Maggie. Let me tell you something about art films. For every “Little Miss Sunshine” or “Memento” there sure are a lot of “Pieces of April”. Actually I don’t hate “Pieces of April” that much, it is just the first movie to come to mind. “Running with Scissors” was a big time disappointment. They changed the focus of the book from Augusten Burroughs adolescence to his relationship with his mom. They eliminated about 10 characters, which is okay, but they twisted the other characters just enough to entirely screw up the essence of the book. I was particularly bothered by the way that pretty much left Dr. Finch off the hook for being responsible for almost all the misery in all the other characters lives. Rather than being grossly incompetent and extremely unethical; he came off as merely eccentric. Plus, there were at least two scenes in the movie that were so poor that they made you a little uncomfortable when watching them. Similar to when your friend shows you something that they are really emotionally invested in, but it blows and you’re not really sure how to react. Do you tell them: “Dude, this sucks.” Or do you try to change the subject quickly? Or do you feign enthusiasm? Whatever you do decide to do, you are still uncomfortable while you consider your options.

In “Running with Scissors” I was uncomfortable with the incredible lameness in particular of the scene where Annette Bening’s character hallucinates that she is seeing snowflakes falling from her ceiling while the soundtrack blares: “Blinded by the Light”. Normally I would laugh out loud at such a horrific sequence, but because I wanted to like this movie, I had to look away. Similar to Nader during the sex scenes of “BrokebackMountain”. Although Nader just felt a little squeamish around those scenes. I felt embarrassment for the filmmakers.

Tonight would be movie night with Scott. It would be my turn to choose the movie. Last time it was his choice and he chose “Clerks II”. I should make him watch a French New Wave Film or something by Fellini as punishment for making me sit through one long scatological joke trying to thinly masquerade itself as a morality tale. Although he does deserve to be punished in such a way, I do not wish to make his brain explode in head. I am making him watch an independent art picture. I do not know how good this movie is because I missed it when it was at the Varsity. I am making him watch “Brick” which I know is better than “Clerks II” without breaking its plastic seal; I just hope that it is exponentially better. Although no movie is that bad on a 106 inch screen, except maybe “Clerks II”.

I would just close by saying that I am currently reading what might be the best book I’ve ever read. I won’t tell you any more about this book at this time, but I would reiterate that it is phenomenal. It also taught me this fun little fact: “Presbyterians” is an anagram for Britney Spears.

Oh yeah, one last thing: Rodin is tomorrow. Still time to signup for the field trip!!