Here are what some of my friends and a family member have been up to lately:

Boone’s bands: Everything from Bach to Broadway

If you didn’t spend last evening in a state of grace, relaxation and live music, then you’re one of the few Boone residents who weren’t enjoying the Boone Municipal Band.

Every Wednesday evening under the stars for the last 91 years, this musical group has kept time with the summer season, entertaining scores of Boone generations and enriching the quality of life with the sound of music.

Lowell Davis is a knowledgeable member of the band, which started its season the last week of May.

“We play on Wednesday evenings at 7:30 p.m. in the summer at the Herman Park Pavilion,” he said. “You can expect to hear around eight different musical pieces each week,” in addition to the standard opening “Star Spangled Banner” and closing “America” the Beautiful.”

The evening just wouldn’t be complete without an ice cream social, featuring cake, pie and ice cream. These duties are handled by a different church groups each week.

There’s no Paula Abdul or Randy Jackson to critique, only good times and quality sounds wafting through the attentive crowds.

“It really is a wonderful atmosphere on Wednesdays for our concerts. The Pavilion has marvelous acoustics and, as the band director Dave Richardson often points out, ‘a thousand shades of green’ as you look around the park,” said Davis. “I think it’s great to see different generations of families each week enjoying themselves.”

Morever, Davis knows all of the kids who are playing in the park while their parents and grandparents listen to music will have “wonderful memories as they get older of a community event that just doesn’t happen everywhere anymore like it does here.”

For long-time resident Twila Ingham, the band directs sweet memories to the forefront. “I do ‘remember the days’ many years ago, when my parents would take all five of us kids and one of those large paper bags full of popcorn out to listen to the Boone Municipal Band every Wednesday evening throughout the summer months,” she said.

At that time the band played at Blair Park, across the street from the high school, said Ingham, instead of its current home Herman Park Pavilion at the south end of Greene Street.

“The park had a pond that the kids would inevitably end up playing in during the concerts,” she said. “We always enjoyed ourselves, and going to the concerts meant that we kids got to stay up later than usual – that was always a treat!”

For the last 16 years or so, Boone also hosts the Iowa Municipal Band Festival on the second Saturday in July each year. “In the past we’ve had bands from as far (away) as Germany and as close as Ames join us for a full day of music in the park,” said Davis.

Be it Basie or Bach, there’s good reason for Boone citizens to wend their way to the Herman Park Pavilion for a little mid-season music.

“It was, and I’m sure it still is, a great way to spend a summer evening,” said Ingham. “The nice part of this is that the Wednesday night concerts were and still are free. There’s no charge, so get off that couch and bring the family out for a great evening of entertainment!”

The genesis of the Boone Big Band offers a musical counterpoint to its municipal cousin.

Formed by jazz enthusiasts of the concert band, the Boone Big Band is a full-size award winning community-based band made up of five saxophones, four trombones, five trumpets, drums, piano, bass and guitar. They held their first annual chili feed and dance at the Boone Municipal Airport last October.

“We really didn’t plan on ever performing as a group,” said Lowell Davis. “We just thought it would be fun to have an outlet to enjoy some of the music that we all love. Once we played together a few times people got wind of the group’s existence and asked us to perform in public.”

Their first performances were so well received, and the players enjoyed themselves so much that the group decided to continue on. They now have over 100 charts in their repertoire.

“We love playing the music and people seem to enjoy listening to us,” he said. “We’re on a bit of a hiatus for the summer months as the focus returns to the municipal band and its style of music, but we’ll be back in full force this fall.”

Time is a key ingredient in Shannon Bardole’s Little White Lye Soap. Bardole, 27, started her business in December and operates from her Ames home. Lye, lard, cream of tartar and a lot of time are combined and the result is, soap, a quality, Iowa-made product that is very gentle on the skin.

Bardole’s process begins with lye and rendered lard from Iowa-raised hogs and some cream of tartar. The mixture is stirred for four hours before it is the right consistency to pour into molds, which her father designed and created. The soap continues to cure for two weeks, to ensure that the caustic lye is blended with the lard to make it gentle on the skin. Bardole carefully cuts and packages each bar and distributes them to retail outlets, all relationships that she has fostered. Bardole learned the art of making soap when she worked at Living History Farms and continues to share her excitement about the process and distribution of her product.

What is exciting about your business that draws you in everyday?

Since this business is so new, I enjoy the new opportunities to create relationships with retailers and customers due to a locally handcrafted high-quality product.

Where were you employed prior to this venture?

I spent four years at Living History Farms after I graduated from the University of Northern Iowa with a bachelor’s degree in family services. Within those four years I was the Broom Shop Supervisor and 1900 Farm assistant domestic supervisor. On the complete opposite end of the spectrum, I am currently the office manager at Atlas Media Group, which deals in collegiate athletics.

What made you decide to open the business?

After leaving Living History Farms, I wanted to continue with some of the things I’d learned there. I can garden and cook at home, but I wanted to be able to bring a quality, Iowa-made product to the public.

Soap was a relatively easy and inexpensive start up. I’d like to get into brooms, but that’s taking more time.

At Living History Farms, we encouraged visitors to participate in some of the daily processes at the 1900 Farm, and one of those activities was making soap. I remember sitting on the porch stirring soap at the 1900 Farm and thinking, “When I leave here, I think I’d like to keep doing this!” It’s an interesting process to see an extremely caustic chemical turn into the gentlest soap you can use on your skin.

What are some other uses for this product?

I use my soap to wash my hands, as we did at the farm, but we interpreted that lye soap would be used for everything from bathing to laundry. I rub my bar of soap into my shower loofah and shave it up to use as laundry soap. One of my customers commented that it helped with itchy skin. I have begun to shave up some of the soap to use as laundry detergent. It’s been very gentle on my clothes, and gets them clean. For a little extra stain protection, I rub some of the soap directly onto the stain, and it’s been known to take out stains such as grease, ground in dirt and blood.

What is special about Little White Lye Soap?

Since it doesn’t have any perfumes added, it is very mild and gentle on sensitive skin.

A single bar of Little White Lye Soap is approximately 5 ounces. The molds I use are wooden boxes that I cut the bars of soap out of. Each bar is a little unique regarding shape and size.

What other items do you sell?

My dad and I make crocheted dishcloths, which we sell.

What is a price range for your items?

What have been customer favorites?

The gift set of a bar of soap wrapped in a dishcloth has been popular.

Why would you recommend Little White Lye Soap?

It’s a mild, gentle soap that is good on your skin in whatever form you use it, whether that is as laundry detergent, hand-washing soap or as a full body soap in the shower.

Where can readers purchase your product?

RVP~1875 is the only location that carries dishcloths. It will also be sold at the Webster City Farmer’s Market from 8 a.m. to noon starting Saturday.

There are pictures on the website, but I thought I would throw out some pictures I took on the day of the interview. 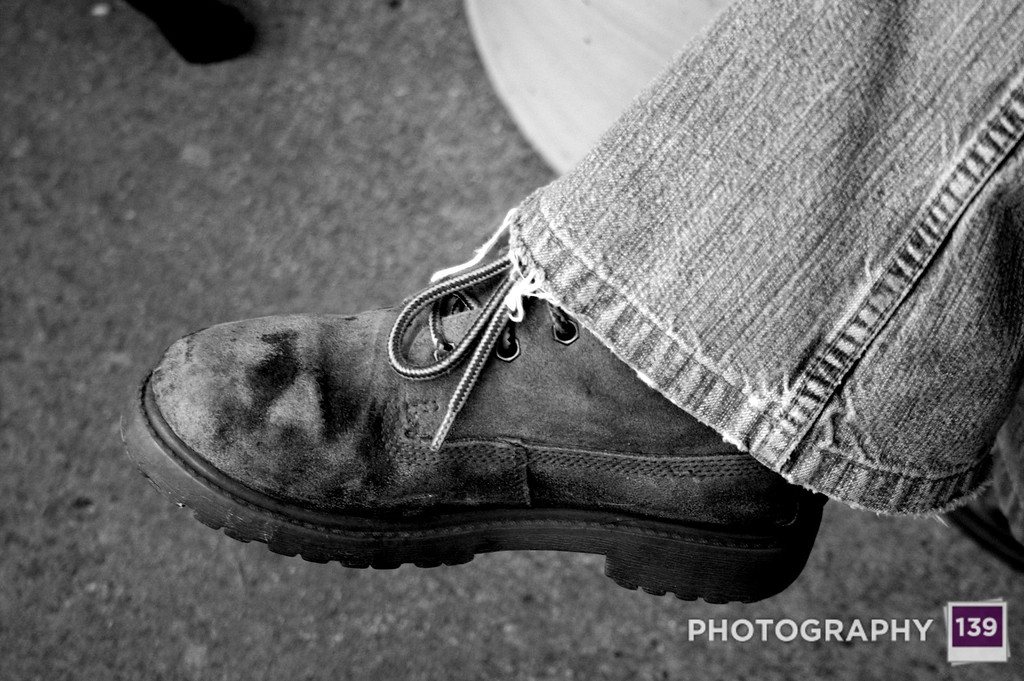 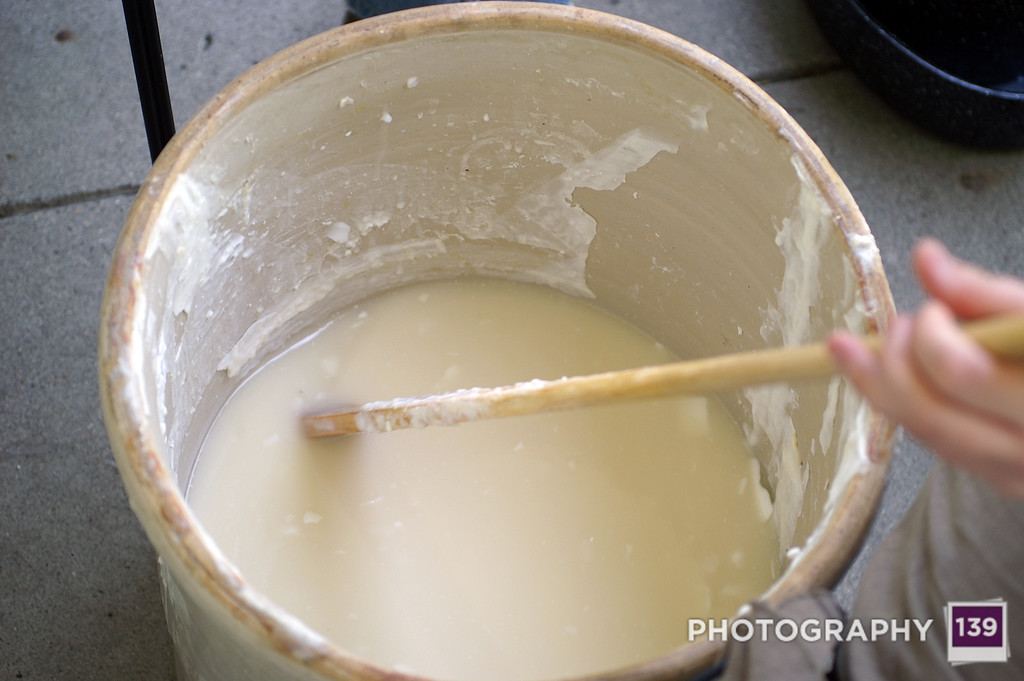 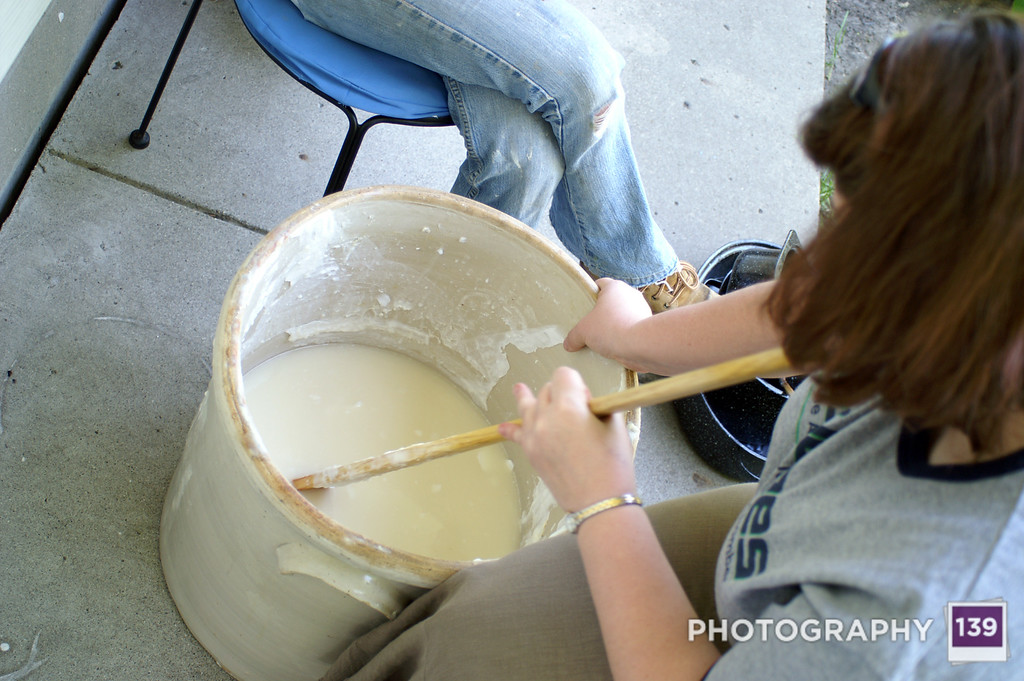 This Cat Didn’t Help at All

Below is a news story about a Hokie Healing Blanket. My sister Teresa made 7 squares for these blankets.