I’m not sure how the subject came about, but one day I was talking to Shannon and she revealed to me her extreme disdain for the cross on top of her church. I didn’t really know how somebody could dislike a lit up cross on top of a church. I had visions of the cross that adorns the Marion Methodist Church in Boone. A cross that both symbolizes the faith of the followers of the Son of Man and could make a pretty mean bug zapper if Boone was ever to fall prey to a plague of locusts.

Upon further questioning, she revealed that this cross not only lit up, but revolved. On this revelation my mind was flooded with visions of a revolving lit up cross. I was immediately reminded of one thing from my childhood.

There are several things I miss from my childhood. The velvet bull painting in Jack’s Tacos. The train booths at the Hardee’s in North Grand Mall. The airplane booths at the Hardee’s on Duff. The animal tables at Arctic Circle. Not knowing that Ronald McDonald actually lives in Ogden. Getting the special Country Kitchen coins that you could use in their vending machines. Putting down the economic status of another person by referring to their possessions as “Pamida specials”. Among those memories is the old KFC road signs. To the best of my knowledge, the old KFC next to Goeppinger Field never had the sign that I remember. However, somewhere in my youthful travels I remember driving by a KFC that on top of their road sign was a bucket of chicken. This bucket of chicken lit up. This bucket of chicken also revolved. I haven’t seen a functioning, revolving bucket of chicken in years. While I might be permanently denied access to that revolving bucket of chicken, I did have access to a cross that was more than a suitable surrogate.

I tried to convince of the greatness of this cross. How it represented more than most crosses, it represented eternal truth and the beauty of God’s grace and the Colonel’s secret blend of herbs and spices.

She was dismissive of my arguments and stood fast that the revolving cross was “cheesy”. I argued against her elitism, but failed to make a convert.

I told her regardless of her snobbery, I wanted to photograph this rotating cross. Shortly after our discussion fate took a hand. The beautiful cross broke. It didn’t light up. It no longer rotated.

I’m not saying that I believe in telekinesis or auras or crystals or Bigfoot or the Loch Ness Monster or that inherited wealth hasn’t created a caste system in our country. I’m just saying that when somebody puts off that much negative energy towards something it will tend to break. I offer up my experience with just about every automobile that I have owned. Particularly that 91 Grand Prix. I still hate you!!! So I’m saying that Shannon’s visceral disdain for the rotating cross was a factor in its ceasing to function.

When she delivered the bad news to me about the fallen symbol of the Good News I was not alarmed. I figured that such a thing was considered a local treasure. Certainly the congregation of the “Big House”* would rally around their pride and joy and it would be only a matter of time before it was proudly beaming out its hopeful message in 360 degrees.

I was beginning to doubt. I was beginning to lose faith. Not in God, but in the FUMC of Des Moines. What was their deal? Was the whole congregation as dismissive of the now lifeless cross on top of their building as Shannon.

I might not believe in the Tooth Fairy or the Yetti or Ghosts or that some people can afford to have health care choose not to have health care. I do believe in miracles. I don’t believe that God stores up miracles and then just cracks them out around Christmas. I do believe that during Christmas people are more likely to be open to seeing miracles. Due to the fact that people are a little nicer, a little more generous and quite frankly just better people during the holiday season there is something known as the Christmas Miracle.

At 10:41 PM on November 29th, I got my Christmas Miracle. That is when an e-mail from Shannon fluttered across cyberspace and landed in my computer mine e-mail account inbox.

The revolving lit up cross on top of First UMC in downtown Des Moines is working again. I hope that it leads to a good photo opportunity. Otherwise I see it as pointless and cheesy. I mentioned to my pastor that you had a photo opportunity in mind, and he said he’d be interested in seeing the result. So, the ball’s in your court now. Have fun with that!

I joined the Ames Jaycees back in October. I have yet to contribute to the organization in any way, shape or form until last Tuesday. It was on that night that I attended an Ames on the Halfshell committee meeting and apparently became a member of the Band Selection Committee. Before the meeting began, Shannon showed me a copy of her church newsletter that had an article that could have been entitled The Return of Greatness, but the actual title escapes me. The meat of the articles was about how a couple had donated some scratch so that the church could return their cross to all of its glory. The article noted that this return to downtown Des Moines skyline was newsworthy enough to have been covered by at least a couple local stations.

As it turns out, I was planning to be in Beaverdale on Friday night to attend at least the third graduation party for Sara. She has one expensive brain. Beaverdale is just a quick hop, skip and jump a way from downtown Des Moines. I negotiated an abbreviated FNSC with Jay and Willy on Sunday. This worked out well for Jay because he was heading back to Cedar Rapids on Saturday for a family Christmas and a date with destiny on Sunday morning. That tale of destiny is for another time, but it does involved a naked old man and not closing the door when you are using the bathroom.

After a tasty meal and some in-vain-attempts to find a facsimile of Spin Art, I headed down to Sara’s party. The party was a good time. I made visual confirmation of the existence of Todd and Kristal. I had a lengthy conversation with Derrick about man vegetables.

I got to talk about music and Jaycees stuff with Shannon. I got to watch Sara go down to her basement to smoke so her parents didn’t see it. I got to take a ride in Derrick’s new ride. It was a good time.

At about 1:30 or so I left Sara’s and headed towards downtown Des Moines. I found the church at the corner of 10th & Pleasant. Unfortunately, it was snowing and freezing cold. Both of these things are unpleasant for humans, but they are dreadful for cameras. Condensation and just general wetness created all sorts of light flare issues. That is the bad news. The good news is that I was able to scout out the area and make some shots. Once again, nothing is quite what I’m looking for, but the first image is pretty close.

While I was downtown I also checked out some of the river walk. I now just wait for better weather, because I have some new inspiration. 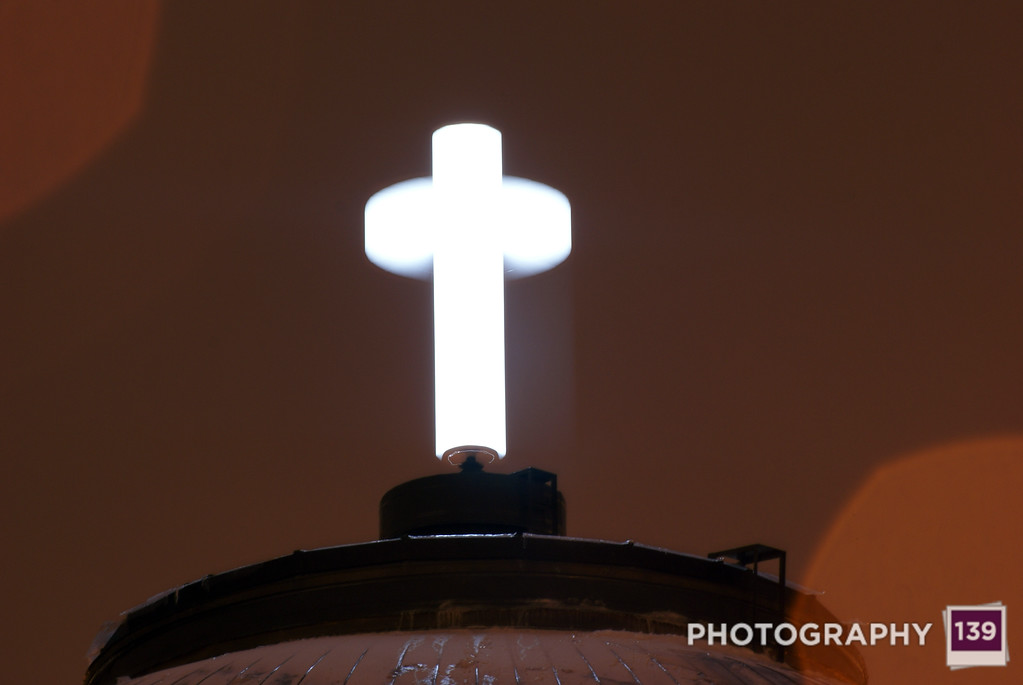 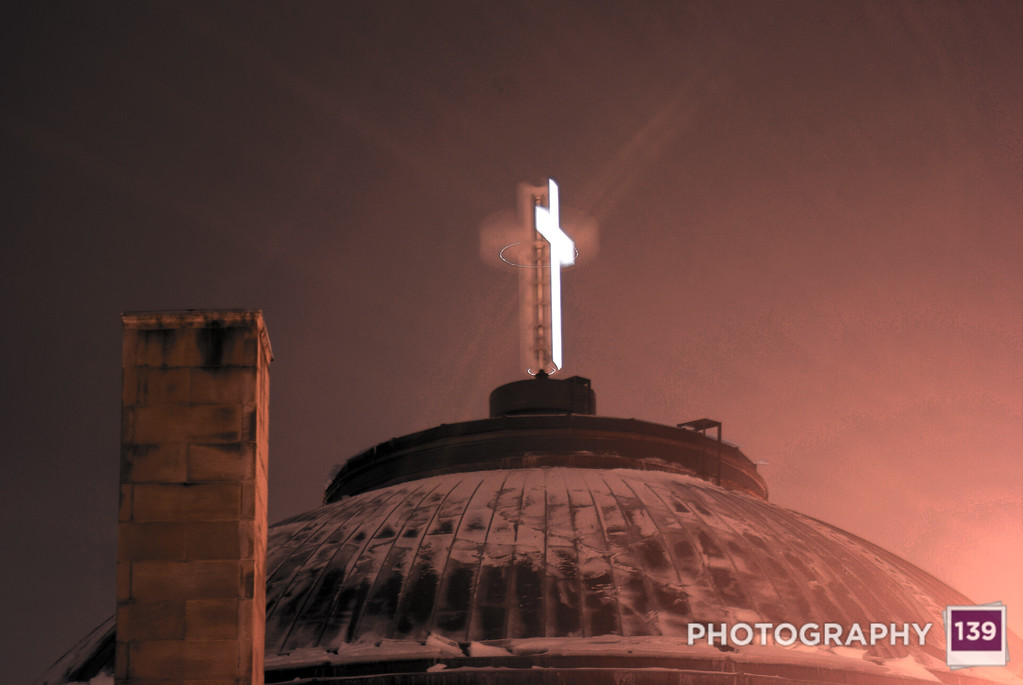 *”Big House”. The Downtown FUMC houses two separate congregations. There is the one that has always been there. Then there is Shannon’s congregation that originally met in South Ridge Mall. I forget the name of that church, but I think it is The Colony. I do remember that the name is based on Philippians 3:20 – “But our citizenship is in heaven. And we eagerly await a Savior from there, the Lord Jesus Christ,” She refers to the other congregation as the “Big House”. It never fails to amuse me.