I spent my Thursday night engaged in Jaycee activities. It started at 6 PM with a new member orientation ran by Shannon and Charby. The highlight of this meeting was getting a new pen. 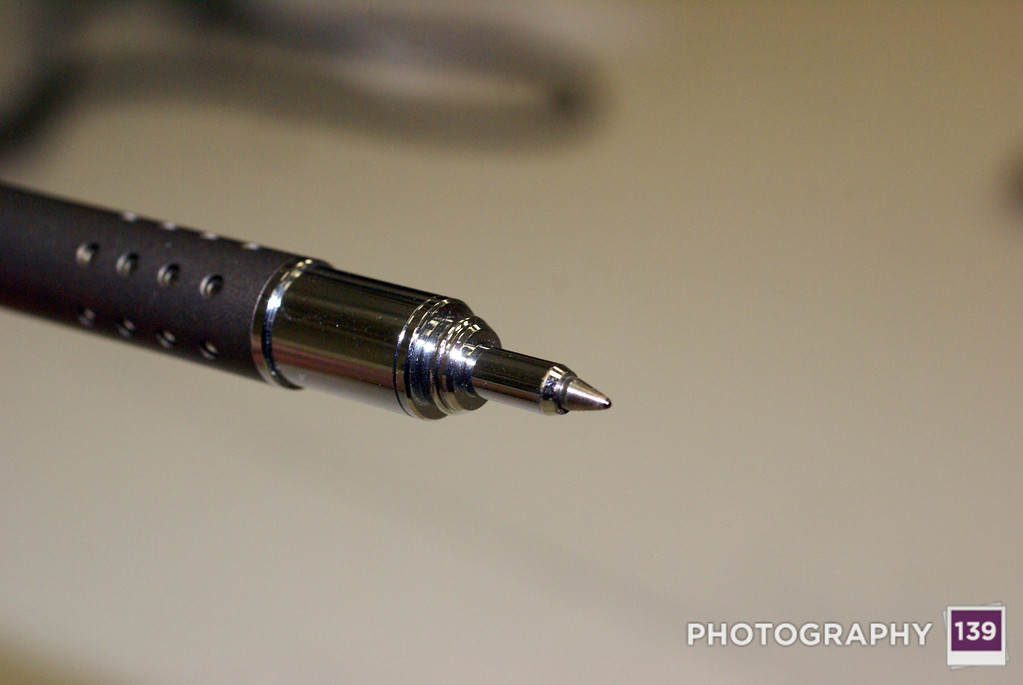 I have a reputation for being an elitist because I think Dan Brown is a talentless hack and you have to be a first-class moron to enjoy the movie Transformers. I am not an elitist, except for when it comes to pens. Frequently when I’m put in the unenviable position of having to borrow a pen I will look at the first pen that is offered and say, “don’t you have something that doesn’t suck?” This pen meets my high standards. I take great joy in writing with it.

After the orientation was a Membership Meeting. This mostly consisted of the guy that runs the ISU Organic Farm giving a presentation on organic food. That was interesting. I learned that organic food is not a diet. It is not necessarily healthier. It doesn’t cost much more to produce. It is just more expensive because of the laws of supply and demand.

After the meeting the Band Selection Committee and a few others went down to People’s to scout a band for Ames on the Halfshell. At this point we have only one slot open and the band Kountertop came highly recommended.

When we left Buford’s, the meeting spot for the Ames Jaycees, we were split up into a boy car and a girl car. The boy car included me, Charby and Todd. The girl car stayed behind at Buford’s for a long period of time to file paperwork or something. That car held Shannon, Jamie and Peggy.

The boy car was supposed to blaze a trail and secure a table in People’s. Meanwhile the girl car would catch up with us later.

Soon after we hit the interstate it became apparent that nobody in the boy car knew the location of People’s. We had part of an address. People’s is on 3rd & Something. That something was most likely Court, but that wasn’t for certain.

As it turned out, People’s was harder to find than we assumed. We must have driven around downtown Des Moines for 20 minutes without finding anything. We even went out to the East Village. Finally after driving around the same 4 block area for the fifth time, we parked. I don’t think that we parked because this had been my suggestion about 15 minutes before, but I wasn’t taking any chances. I got out of the car and started walking around and looking for people that knew the Des Moines area well.

Meanwhile Todd called Peggy to find out an exact address for People’s. As it turned out, I was standing right in front of the address, only the building didn’t say People’s, it said Legend’s. There was a sign that said that People’s entrance was around the corner.

We went around the corner and after a half block found a minuscule sign that proclaimed the presence of People’s. As it turned out, People’s was in this building that we had driven by at least 5 times, but it was on the third floor.

When we got where we were going, there were strange sheets of paper on all of the tables. 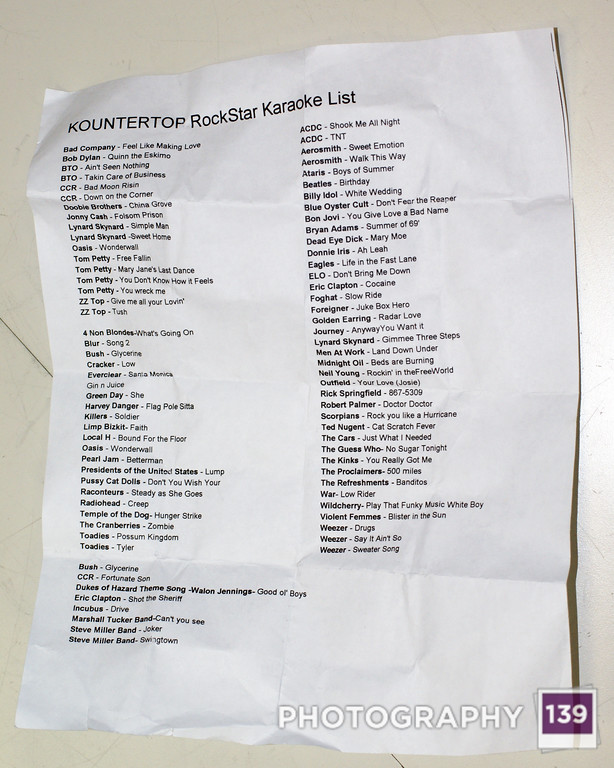 As it turned out, this was not a straight concert. This was karaoke with a live band.

I was not blessed with a beautiful voice. I have done karaoke on a handful of occasions. However, there is no way I would consider doing karaoke with a live band. It is one thing to waste the time of some DJ, but it is quite another to waste the time of actual real musicians.

The girl car group arrived shortly before Kountertop took the stage. They had no problem finding the bar because of the groundwork and trailblazing that the boy car had done.

Shannon came back to the table with a drink that was called Yellow. Apparently you can order drinks by color at this bar. That made me slightly uneasy because Nate and I had an idea a few years back that will one day make us millions. We are going to make a market a brand of alcohol called BW. The types of BW will be labeled by color. We are going to have a Periwinkle and a Fuschia and a few other colors.

Soon after everybody was at the table Kountertop took the stage. They were dressed in a consistent theme and were all wearing ties.

I said to Charby, “Wouldn’t it be badass if they were a punk cover band.”

“That would be pretty sweet.”

“I would love to hear some Ramones or New York Dolls…”

“Or the Dead Kennedys”

“I would love to hear some Jello Biafra. California Uber Alles or Stealing People’s Mail.”

“Or some Dead Milkmen”

“If they played The Badger Song that would make my night. But I would certainly settle for The Clash. If they play The Clash, I say we book them right now.”

I have to say that I was highly impressed that Charby brought up both the Dead Kennedy’s and the Dead Milkmen. I’ll definitely have to keep my eye on him.

Kountertop played the first chords of their first song. Somehow along the way I had managed to convince myself that they were playing The Clash. This was going to be phenomenal. A few seconds in I realized that they were playing Midnight Oil’s Beds are Burning. Not a bad song, but if they would have played London Calling or Lost in the Supermarket, that would have been something.

After their first song was over, Kountertop announced that they would play a few songs and then the karaoke competition would begin. They gave the directions that if you wanted to participate in the competition that there was a guy sitting on a couch in the corner of the bar. You had to go check in with him.

Kountertop next played a song by The Pixies and then Folsom Prison Blues, which is one of the greatest songs of all-time. Then they stopped for the karaoke competition to begin.

While they were waiting for people to sign up, the guy in the corner began to speak into the microphone that had been placed in front of him.

I have two impressions of this guy. He was backlit and in a corner. This made his physical appearance mysterious and his voice to feel somewhat disembodied. His voice was monotone and never fluctuated. It gave me the real strong feeling that this guy could have been a character from a bad David Lynch movie that had all of his scenes left on the cutting room floor.

My second impression is one of incompetence. My old boss was blazingly incompetent. I don’t feel that there is a word in the English language that properly encompasses just how inept he was at his job. Any characteristic you would not want in a boss, this guy had it. He was lazy. He was negligent. He was capricious. He didn’t know what he was doing. Why did he keep his job? His father-in-law owned the business.

This guy in the corner with the monotone voice must own the business. He spoke for almost 10 minutes in between the time that Kountertop played their last song and the first karaoke contest hit the stage. He told many an unfunny joke. He made many a pointless observation. He tried to engage Kountertop’s lead singer in witless banter. He was so unfunny that it was painful to endure. The only thing positive I can say about the time that guy started in on the microphone is that it was surreal. It was like being transported to another universe where a lifeless, bodiless, monotone voice amuses only its self.

After about 5 minutes of this I leaned over the table and said: “This is exactly how I imagine hell.”

Only this wasn’t hell. It only felt like an eternity. Finally a guy took the stage and the competition began.

The first guy sang a song by The Eagles, I think. He was actually pretty good. I figured maybe all of the people performing tonight would be pretty good since who would want to waste the time of live musicians by going up there and sucking.

The next guy up there proved that my faith had been ill placed. The next guy up sang Radar Love. He was pretty bad. In fact I was not able to keep my attention focused on his performance despite the fact that I consider Radar Love to be one of the Top 5 Greatest Roadtripping Songs of All-Time.

My mind wandered. I thought about whether or not they would play the space sounds at the end of the song. Then I began to look around the bar.

I made eye contact with the guy sitting by himself at the next table.

“This guy sucks! Wait until I get up there!” He said to me.

“Are you getting up there?” He started to walk towards my table, so I got up and walked towards him.