I’ve been thinking on a topic lately and I’ve come to the conclusion that I just need to write about it and then be done with it. I’ve been thinking about junk in art. Not refuse or garbage, but the male productive organ or the penis. I will refer to the penis as junk for the rest of this entry to prevent some people from giggling while they read this treatise.

Near the end of the 19th Century a man (described as either an atheist or agnostic depending on the source) went to hear a preacher speak. The preacher relied heavily on a segment of Genesis that says that giants once walked the Earth.

This lead to a dispute between the preacher and the man about how literal one was to take the Bible. The preacher insisted that giants walked the Earth and that they were 12 feet tall. The 12 foot part the preacher said that he “just knew”.

The man left the revival meeting and got an idea. He went to Fort Dodge and bought a big block of gypsum for a barrel of beer. He then took the gypsum to the nearest railhead (Boone) and shipped it to Chicago. In Chicago he hired a man to sculpt a giant.

His exact orders were: “Make me a naked giant! Make him look like he died in agony.”

After the sculptors were done the man took the giant to his cousin’s farm in New York where they buried it. They waited almost a year and then the cousin ordered a new well to be dug right where they had buried the giant.

The well diggers found the giant and learned men and fools came from all over the country to have a look at the giant. There was a great debate at the time about whether or not the giant was a petrified man or an ancient statue. The man and his cousin began charging people to see the giant.

After the man and his cousin had made a tidy fortune on their con, the truth was discovered. People still came to see the giant though.

The original gypsum giant resides in a museum in Cooperstown, New York. Fort Dodge had a replica made and it is housed in the Fort Dodge museum. Since I don’t think I will be making it to New York at any time in the near future, Baier and I conspired to make a pilgrimage up to Fort Dodge to see their version. This trip came with the nice little ancillary benefit of annoying Russell who hates Fort Dodge despite the fact that he is a Dodger.

I knew that the Cardiff Giant was anatomically correct (to an impressive degree) because of some of the reading I had done on it in preparation for the trip. I did not expect that this one section of gypsum that made the Cardiff Giant a man would be somewhat controversial.

I for one don’t really desire to see junk. However, I don’t see anything wrong with including junk in art. It is the way that we are constructed. There is no reason to pretend that we are not.

However, about a week before the trip it came to my attention that not everybody wa comfortable with the junk of the Cardiff Giant just being left out there blowing in the wind, so to speak.

I was talking to Shannon about the trip one night. She told me that Living History Farms has their own version of the Cardiff Giant that they brought out for special occasions. She knew the guy that had sculpted their giant. Their giant was more “modest”.

The word modest has a few different definitions. Since I don’t have any problem with showing junk in art, I immediately glommed onto the definition of modest that relates to size. He was more modest meant to me that LHF had decided to reduce the giant’s endowment. I did not question her at the time.

The day of the big trip arrived.

Baier and I loaded up into the Rideshare van. We made a stop at the Whistle Stop Cafe for breakfast and then headed north towards the Cardiff Giant.

When we arrived at the Fort Dodge Museum we made a pact that the Cardiff Giant would be the last thing that we would see.

We ambled through the rest of the museum letting the anticipation build. After a couple of hours the Trainwreck that I had knocked down at the Whistle Stop came back on me and I visited the little boys room.

While I was enjoying the environs of the Fort Dodge Museum bathroom, Judas Baier broke our pact. When I began walking across the Fort’s courtyard he came strolling towards me from the corner of the fort that houses the Cardiff Giant exhibit. I cold feel that he had betrayed me.

“All I can say is there must be a very happy stone lady out there somewhere.”

So it was true. The Cardiff Giant was a giant among men in all conceivable ways. 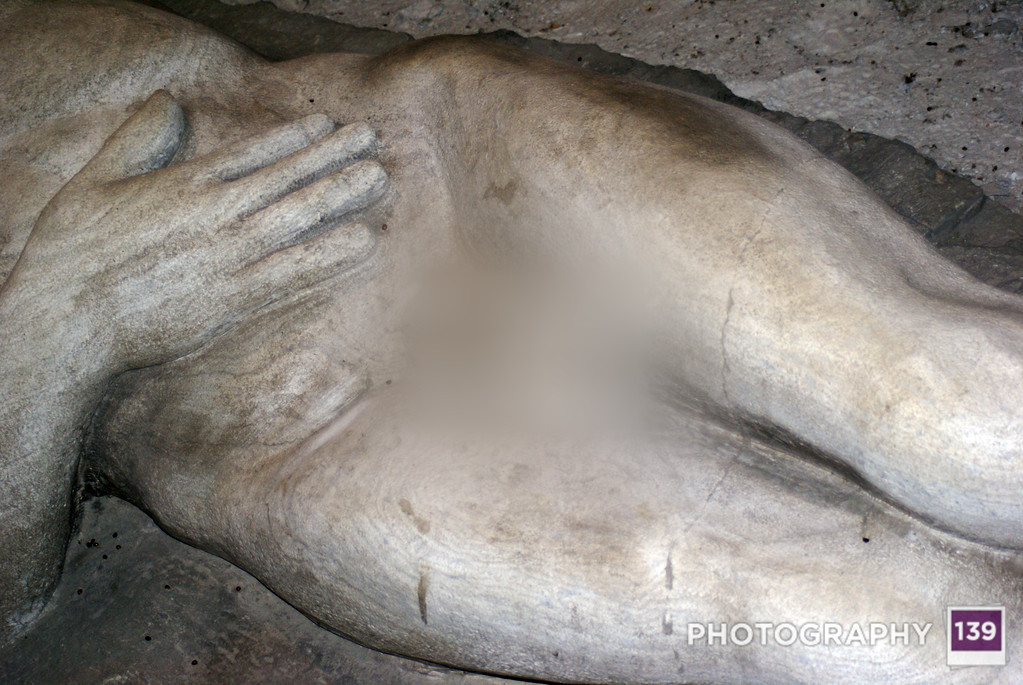 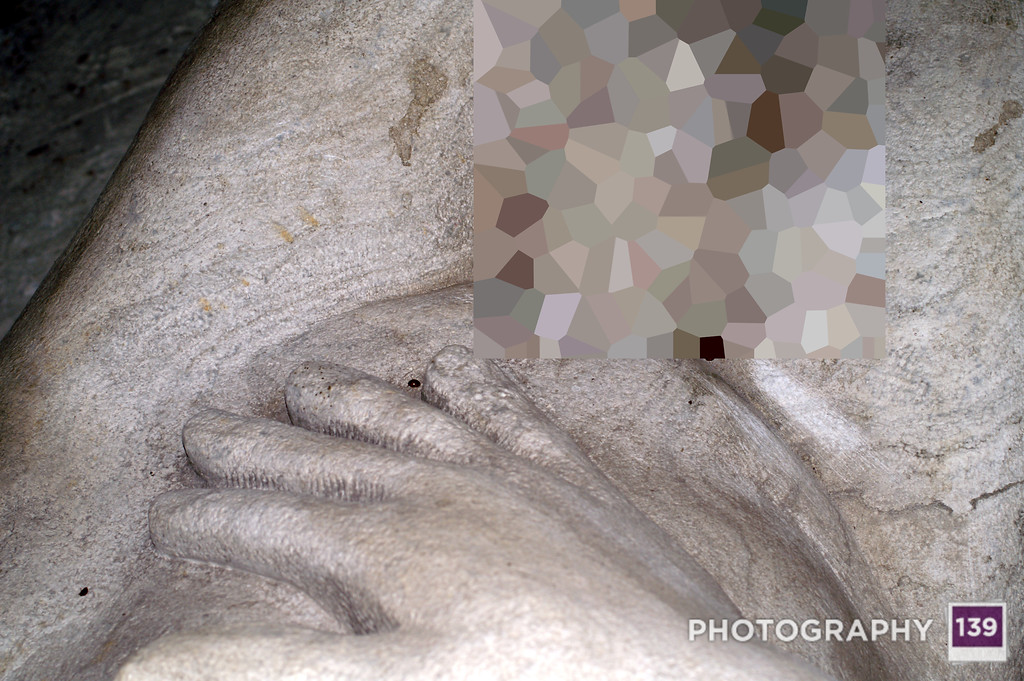 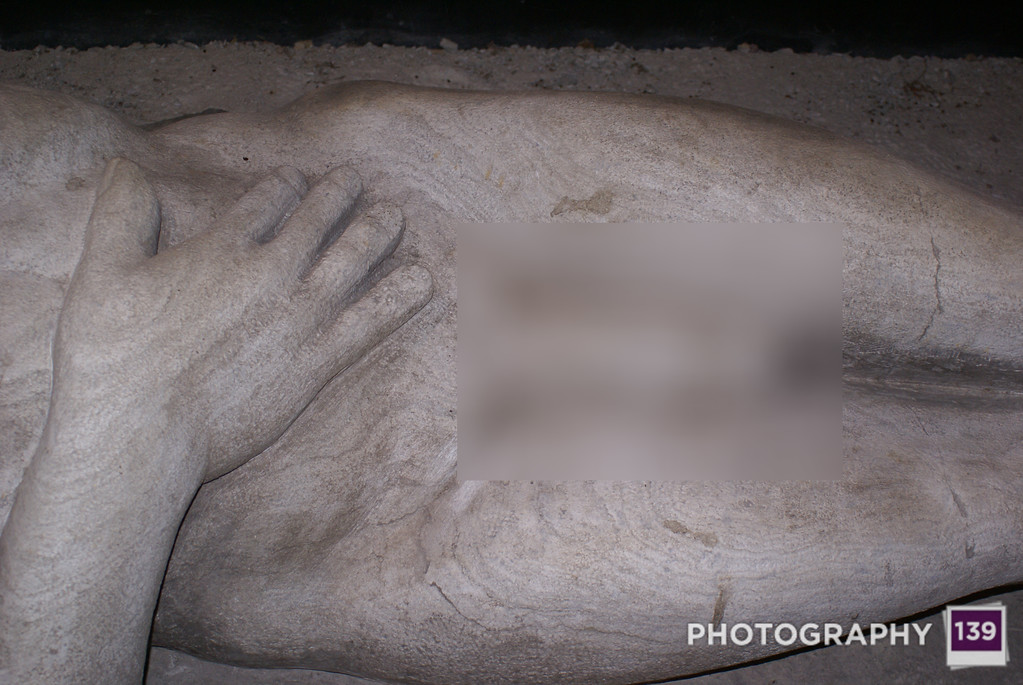 If I had immediately published this entry as soon as I returned from Fort Dodge I would have never even considered blurring out the junk of the Cardiff Giant. To me it is just art and it is just junk. It is natural. I blur it now because I know that the Cardiff Giant’s junk is a major threat. How or why? I don’t know.

However, as the days wore on the word “modest” began to dig at me. It was one thing to not make the giant anatomically correct. I began to wonder if what Shannon meant by modest was that they had simply deprived the Giant of his manhood and never gave the Giant at LHF any junk. 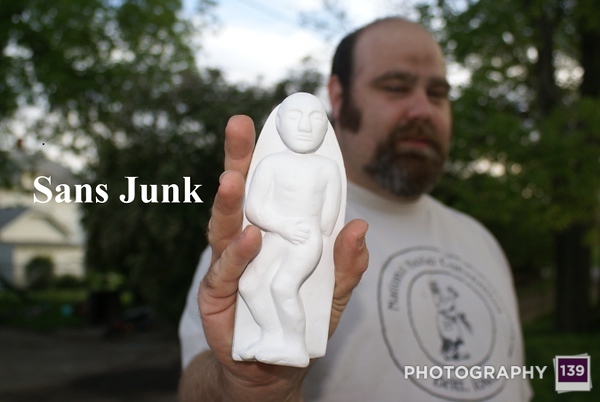 Crime Against a Statue

I don’t get it. If I pick up a knockoff of Michaelangelo’s David, they don’t get rid of his junk. What is so dangerous about the junk of the Cardiff Giant?

So I decided that when Shannon said modest she must have meant that they shrank his endowment. This set my mind racing as well. Why would you do such a thing? Who would do such a thing? Do you have to have a meeting to do such a thing? Or can the sculptor make a unilateral decision?

Then he scoffs to himself and says out loud: “I don’t think so buddy. 3 inches is more than enough.”

But what if it wasn’t the insecurity of the sculptor that lead to the Giant being robbed of his manhood. What if this was a committee meeting? I have sat through a ton of meetings lately. I have no problem imagining the leader of a meeting standing in front of a group.

“The next thing on the agenda is deciding on the girth of our Cardiff Giant replica’s junk.”

“Why are we discussing this, shouldn’t we just use the same dimensions as the original Cardiff Giant?”

“It has come to the committee’s attention that there are people out there that are not comfortable with the giant being so giant.”

“Isn’t that just their own immaturity. I mean it is just junk.”

“We are a family museum.”

Then a vote would have been taken on the matter and a few inches were lopped off.

I contacted Shannon to find out exactly what she meant by modest. As it turns out, modest to LHF means that the Giants is “covering his junk.” I have to confess, that possibility never once crossed my mind. I don’t like it any better than what I thought had happened, but at least nobody had looked at the Giant and willfully denied his his full endowment.

What is the deal? It is just a statue. The Baiers hail from Audubon. That is a town that houses a 40 foot tall anatomically correct bull statue. A statue with junk isn’t new to them.

I finally had decided to come to peace with the world and its anti-Cardiff Giant junk crusade. Then one thing happened. While I was preparing for this blog I uploaded a full body picture of the Cardiff Giant to Photobucket. Photobucket is where I house all of the pictures I embed in blogs.

I had some busy days and nights and I posted some less ambitious entries in its stead. Then yesterday when I went to Photobucket to upload some images I saw a shocking thing. My full length picture of the Cardiff Giant had been deleted because it violated some part of the licensing agreement.

“This was the most unkindest cut of all.”

So now I blur the junk of the Cardiff Giant and I house the images on my own server. I am probably on some FBI watch list now. Great.

I worry now that we are heading towards that future world that was predicted by the prophetic film Zardoz. A world where junk is considered evil.

2 thoughts on “Too Hot for Photobucket”