I have to admit that I’m kind of phoning this one in. I’m going to copy and paste and email I wrote about the Living History Farms Run on Saturday.

You just need to know that there was some confusion about whether or not we would be able to watch Willy and his friend Kristy participate in this race.

The LHF Run ended up being a piece of cake from a spectator perspective. Jay and I left Boone about 7:45. We got down to Des Moines at about 8:30. A line of traffic began to form on Hickman (correct me if I’m wrong) underneath the interstate bridge. This gave me some cause for concern, but it was wasted energy. We pulled into the LHF parking lot and they had people directing traffic. We got a choice parking spot right next to the road.

In the morning it wasn’t that cold. In fact, Des Moines didn’t get nearly as much snow as Ames or Boone. We hung around the starting point for awhile, but could not find Willy in the middle of the mass of humanity of 7500 runners and maybe another 500 or so spectators.

We walked maybe a quarter of a mile down the course and set up. The hope was that when the crowd started to move we could pick out Willy and Kristy. When the racers did reach our point it was fairly impressive to see 7500 people running next to you. It took in the neighborhood of 6-8 minutes for all of them to run by us.

We were unable to pick them out. It was like looking for a needle in a stack of needles, plus we didn’t know what they were wearing.

After the runners passed we cut up through the town to watch the runners go by again. By the time we got there, the group had spread out, but I still didn’t think that we would see Willy. As luck would have it Kristy and Willy saw us and waved to us. I’m not sure how they saw us, because we were standing behind another group of people and Willy just isn’t that observant of a person.

After they passed we followed a group of spectators to a part of the stream where the racers would have to cross it and then climb up a hill using ropes. We set up near there. I was at a spot in between the ropes and the creek. Down in the little valley it was actually pretty warm because there was no wind.

What I did not count on was that the ground I was standing next to was going to turn into mud after a few hundred runners came out of the stream.

While I was standing there. Annie Buchmiller came running by. She stopped briefly and said, “Hi.” Then she ascended the hill.

As runners ran by me I got covered in mud. At least my jeans and winter jacket did. Some groups of people started picking up mud and throwing it at each other. One girl threw some at the guy she was running with and he ducked and it hit me.

She looked horrified and she came over and apologized.

I said, “Don’t worry about it. It’s no big deal. It’s my fault for standing this close to the action.” I do believe that.

Eventually Willy and Kristy came through the stream, but they didn’t cut the way the course was supposed to cut. They didn’t go up the ropes. They went over the side, so I didn’t really get a very good picture of either of them. Actually I didn’t get a picture of Kristy at all.

After they passed we walked out of the stream valley and made our way towards the finish line.

Here is an example of focus.

The runners began to get backed up pretty far from the stream. We had to work our way up the pack to find a place to cross the course and head back to the town. While we were walking alongside the race course a bunch of girls that were kind of stopped because runners were backed up at the stream that we were walking by asked, “Aren’t we cute enough?”

At first I didn’t realize they were talking to me, because I was 100% focused on getting to the finish line before Willy.

So, I kind of responded off hand, “You’re cute enough.” And kept walking.

It was then that it dawned on me that they thought I should take their picture because they were “so cute”.

“I guess it has happened twice this year.”

While we were walking back to the town it started to snow and the wind picked up. The temperature must have dropped about 10 degrees.

We watched them cross the finish line and I got a picture of Willy and Kristy.

Jay and I stopped by Christian Photo to pick up folders for December 1 and the Roland Christmas thing.

When we got to Sara’s she loaned me a pair of pants that didn’t really fit, but as long as I held them up while I walked it was okay. At least better than being covered in mud.

We ate at Los Laureles. It was excellent. They serve their meals with 3 different types of salsa. I’d say their only drawback was that they serve their soda out of cans, therefore there are no refills. Maybe the best refried beans I’ve ever had.

Then we hit the Juice Company. I had the Orange-Carrot-Banana. It was very good. I think in the future I might go with the smoothie so it is cold. I can’t remember what Sara had, but the name might have had Aloha in the title. Jay didn’t have anything and he seemed confused as to why anybody would pay 5 bucks for 24 ounces of juice. Sara liked it and is going to go back to try their wheat grass at some point. She also like the atmosphere because it was a lot less “snooty” than Fresh. 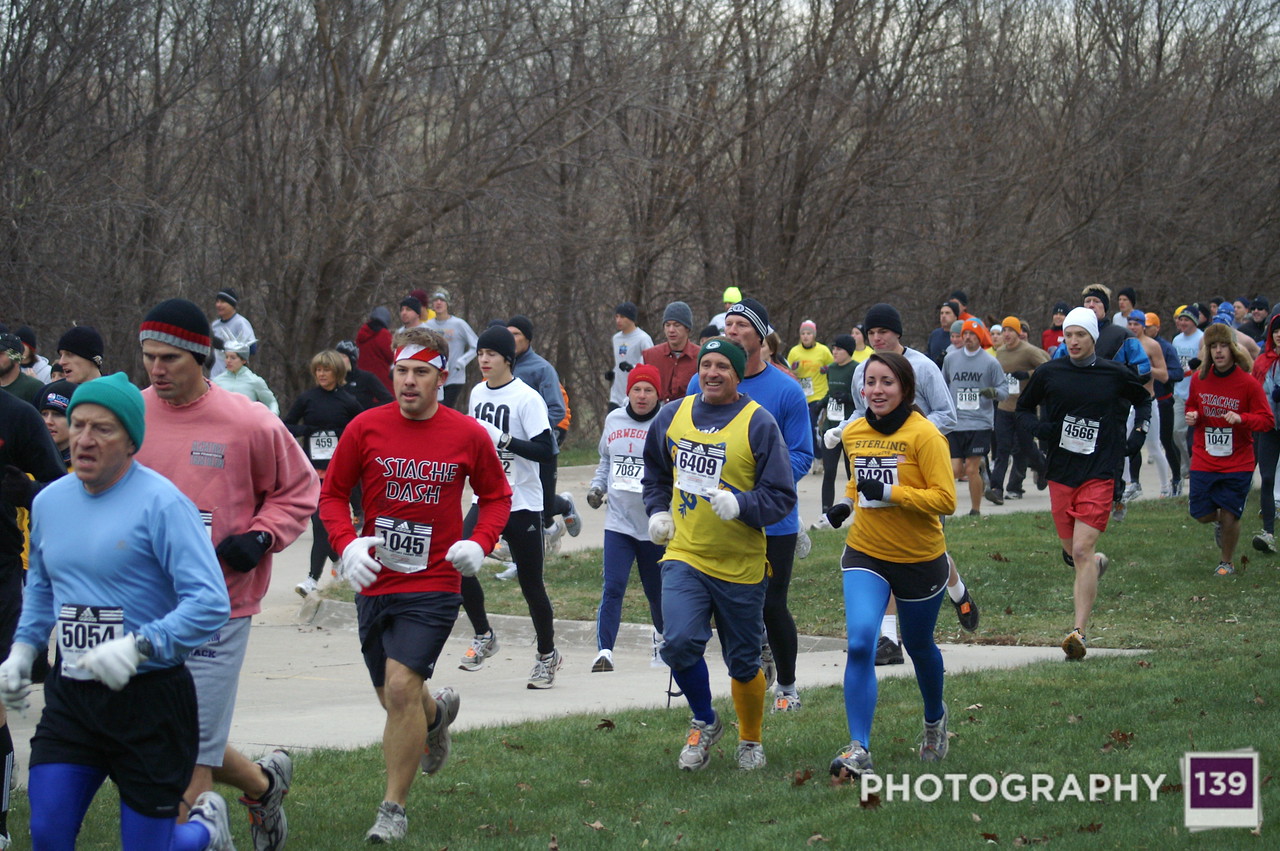 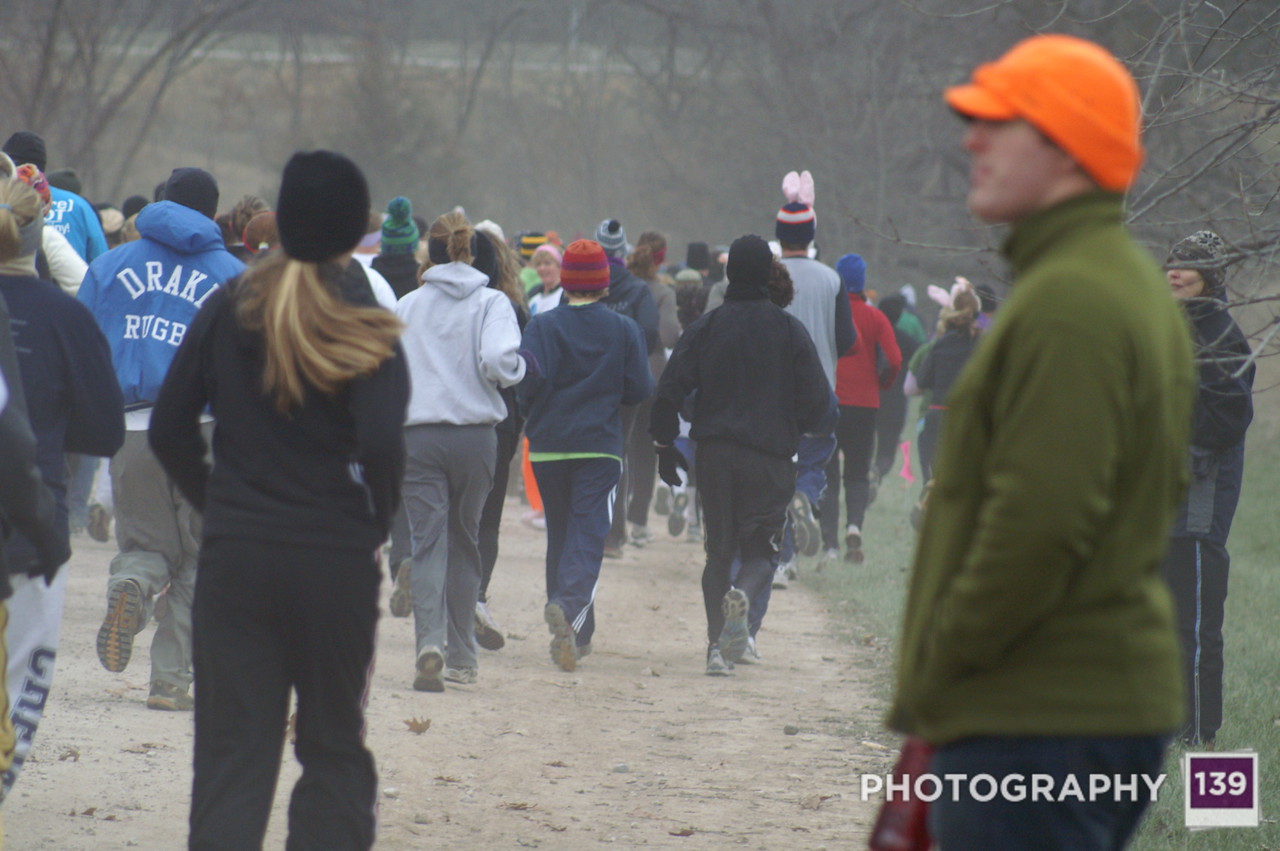 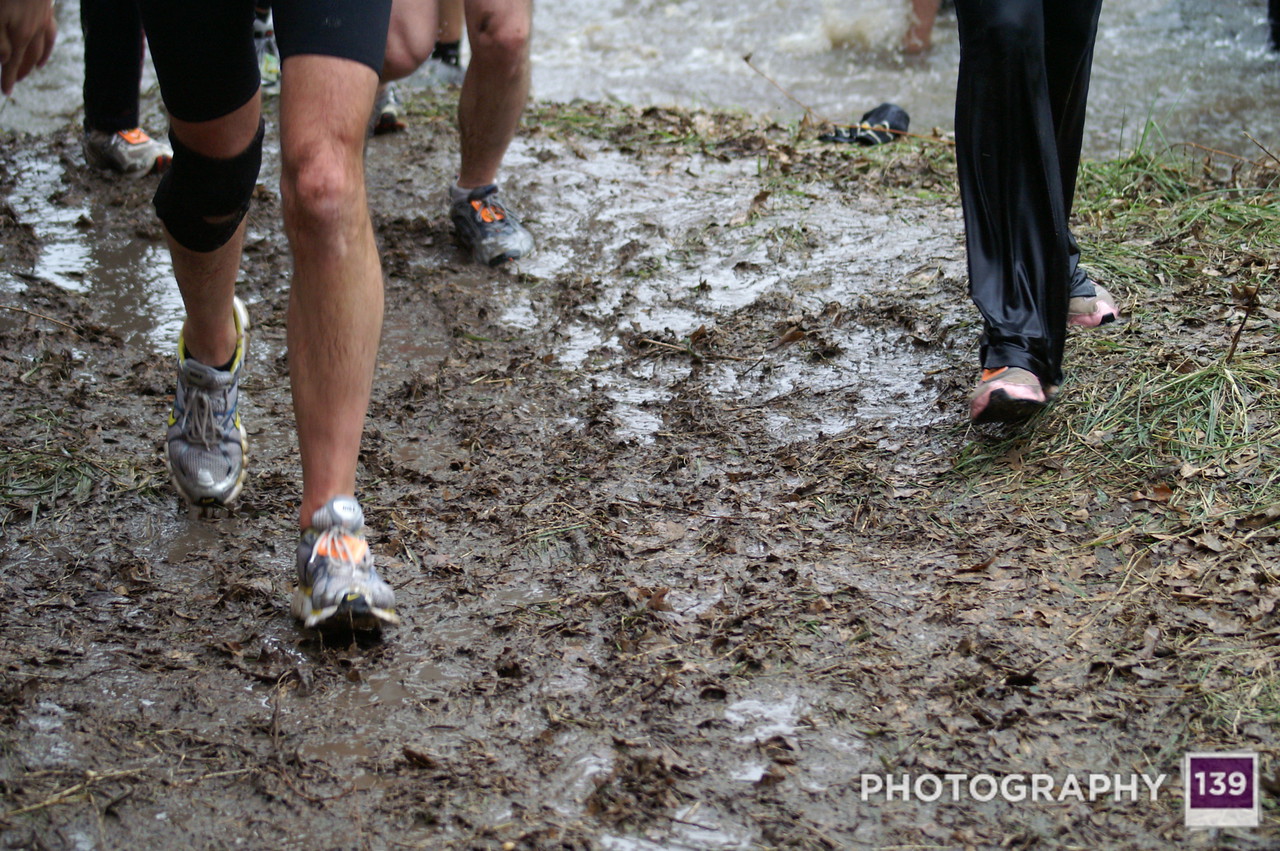 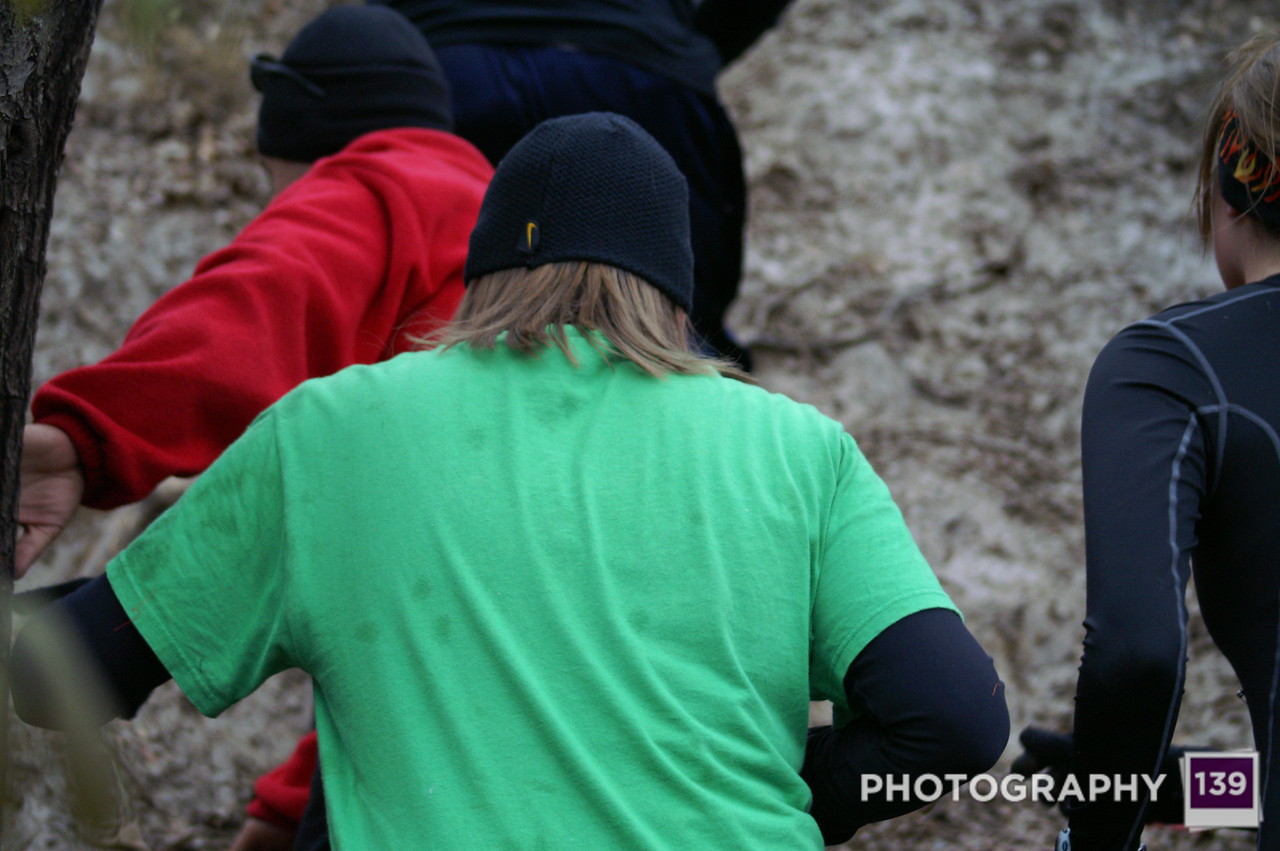 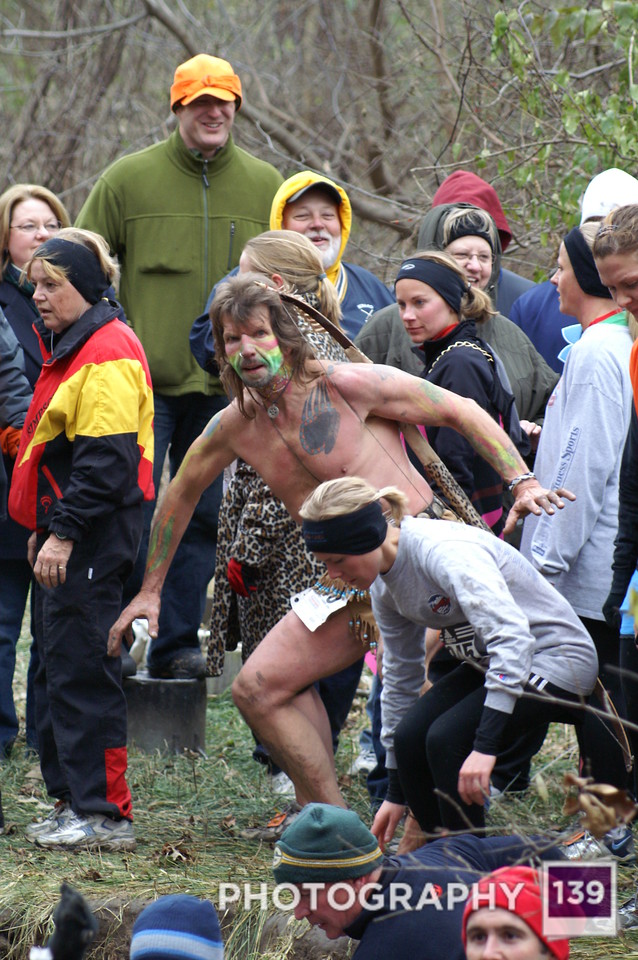 One of my favorite runners. 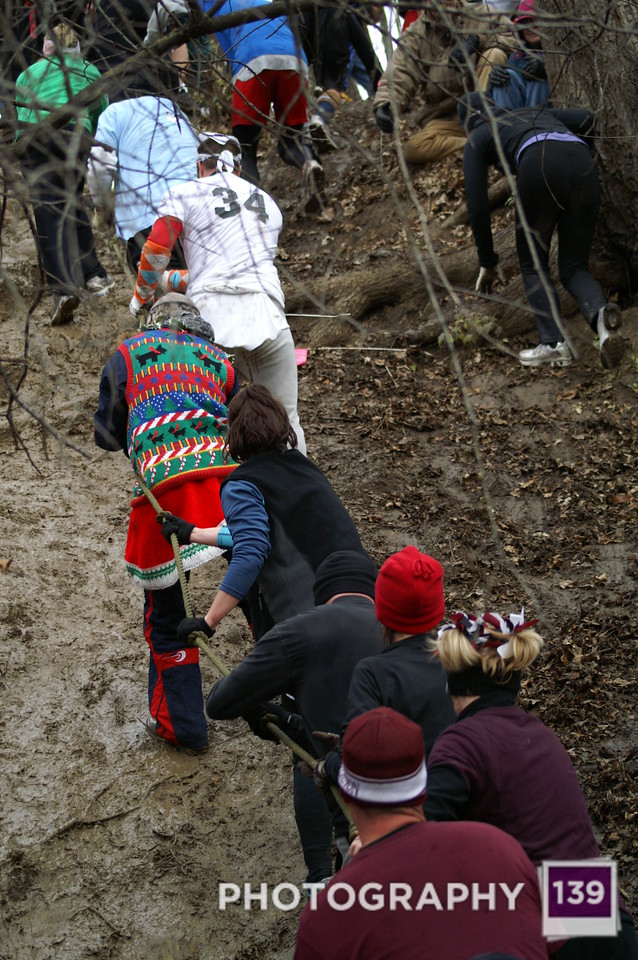 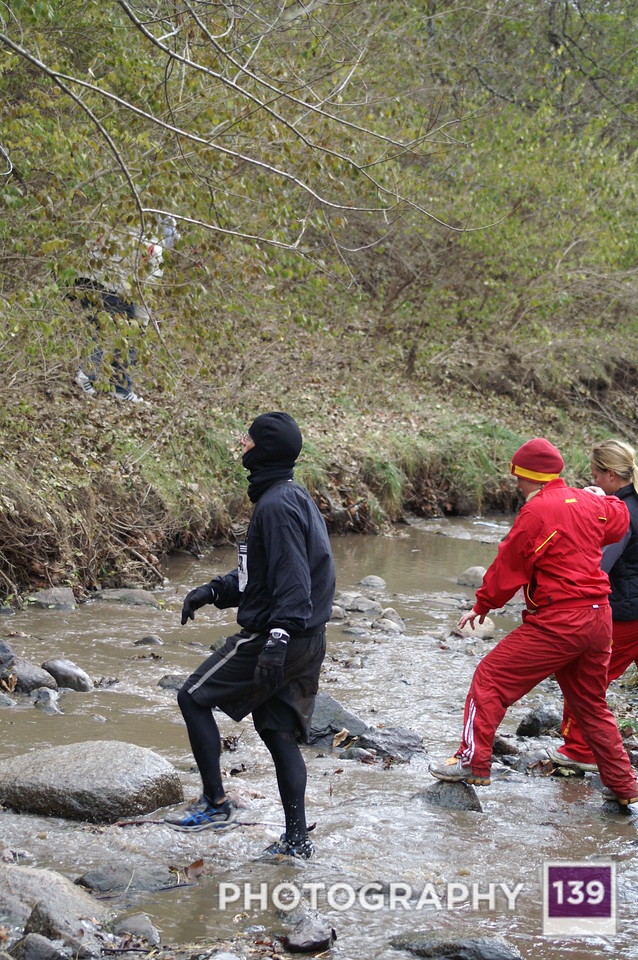 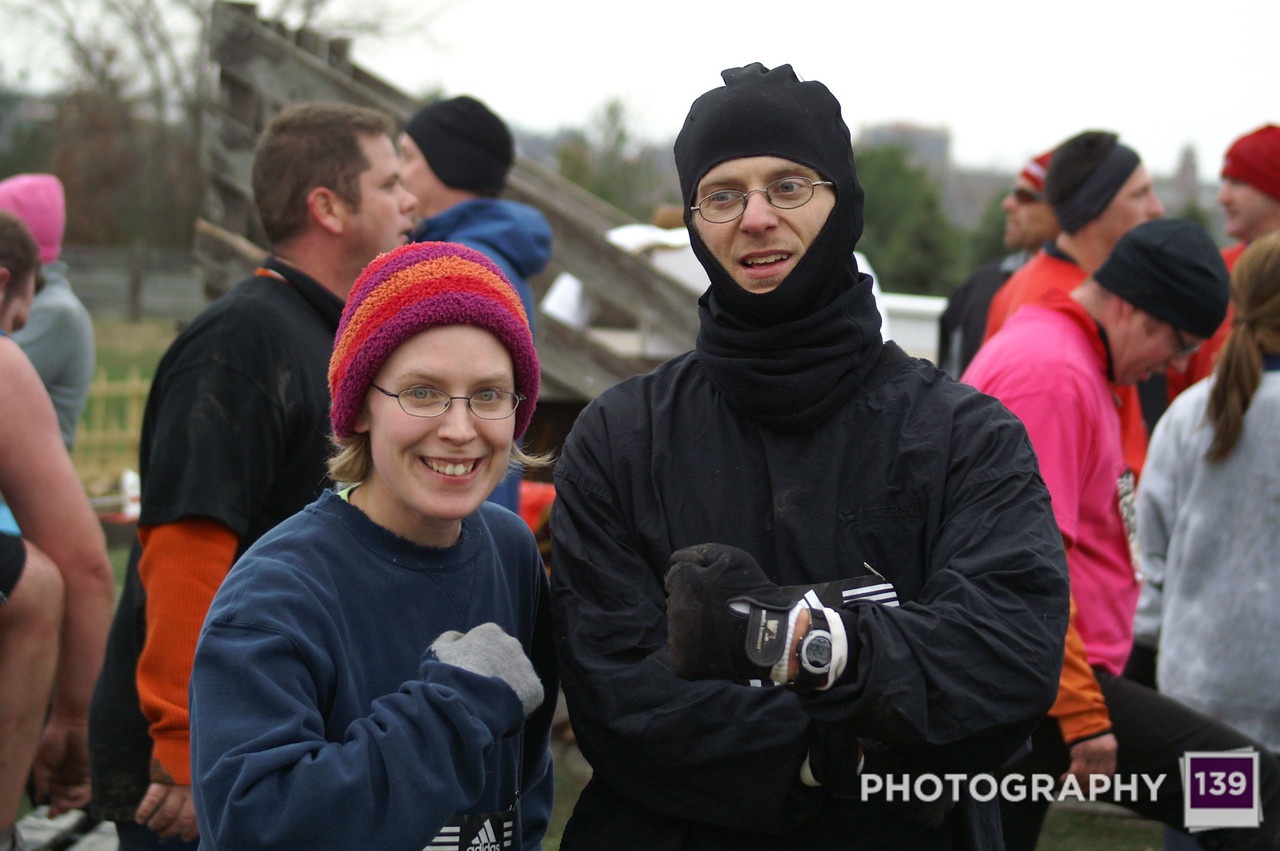 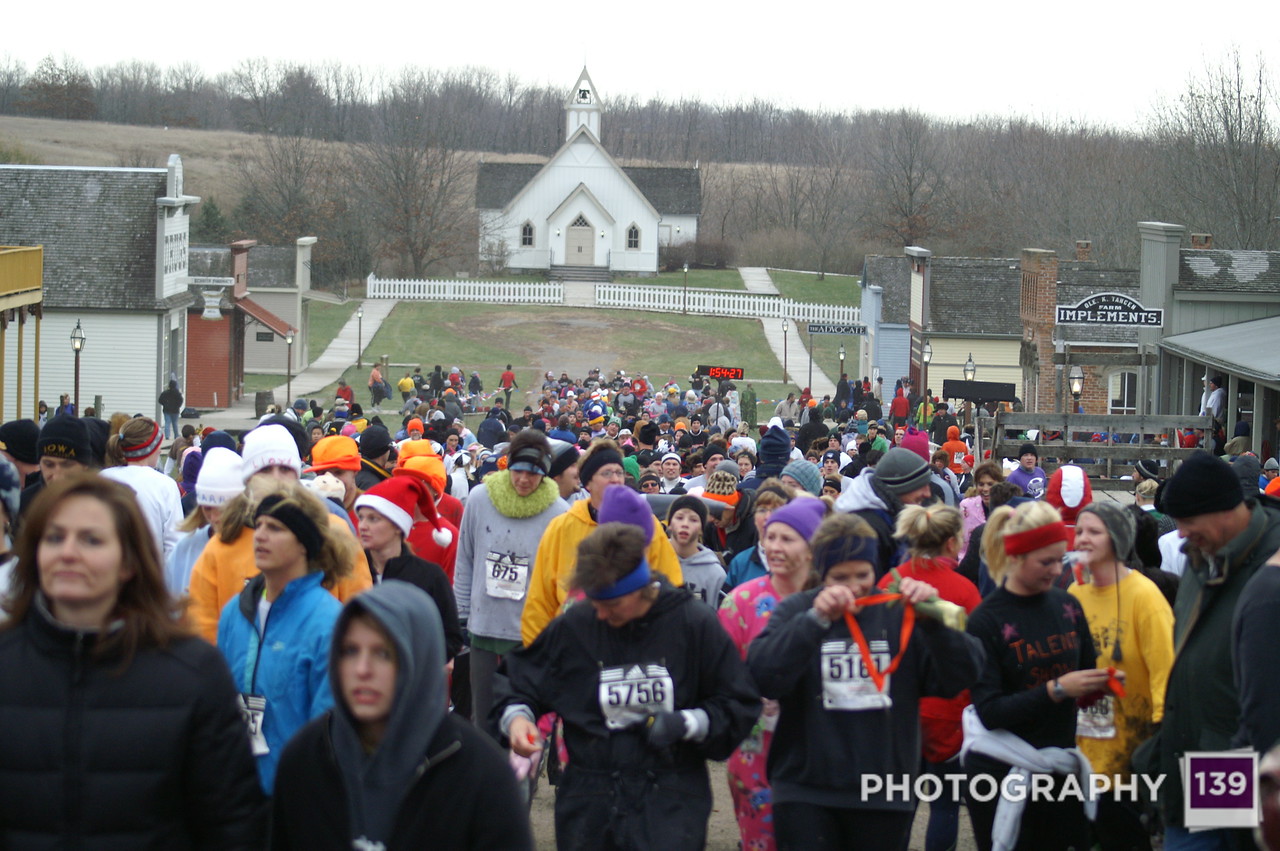 After the Finish Line

The squirrels in Sara’s neighborhood have been eating her pumpkin. 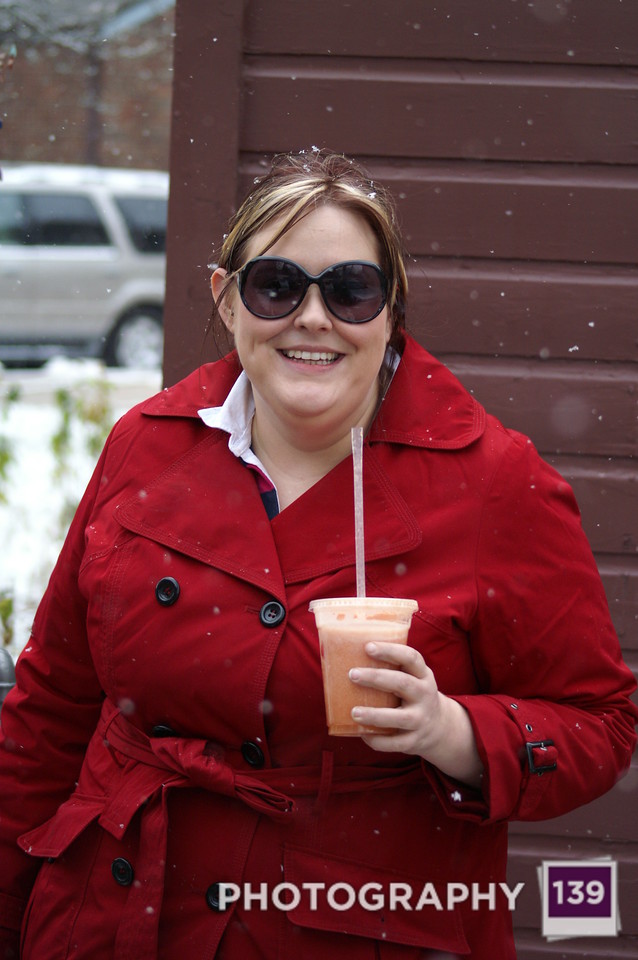 Sara with her drink from The Juice Company

Styling in my loaner paints.

All in all, it was not a half bad day.