About a year ago I posted a comment on Shannon’s MySpace page where I was apologizing in advance for what Iowa State was going to do to her UNI Panthers IF Wesley Johnson played in the game.

Wesley Johnson did indeed play in the game and he played well, but UNI came into what was once the toughest building in the nation to play in and beat Iowa State rather soundly. Most disappointing about the game was the fact that ISU seemed to quit in the second half.

It was McDermott’s second team and for the second straight season he had to completely rebuild the roster in the offseason. It was a disappointment, but in retrospect it was to be expected.

Then in early January I was at the Jaycees Year End Banquet. I believe on that same night Michael Beasley was personally destroying the Cyclones.

I believe that it was at this point that Shannon made a rather snide remark about the Cyclones. I had to stand up for the Cyclones and we agreed to attend next season’s game with a friendly wager to boot.

It is a little known fact that I rarely lose wagers. In fact it has been about 5 years since I last lost a wager. I knew that I had, 11 months in advance, secured a victory for the Iowa State Cyclones. Don’t believe me?

Check the archives: I guarantee an ISU victory over UNI! (You will have to scroll past the pictures)

Or I can repost the pertinent part of the blog:

The first event occurred while I was talking to Shannon. Somebody came back from the bar side of the American Legion to announce that my beloved Cyclones were losing by 25 to Kansas State. Although it was sad news, it was to be expected. The simple fact of the matter is that they have Beasley and we do not. That fact alone will decide quite a number of games in Kansas State’s favor this season.

At this point Peggy (the 2008 Jaycees President with questionable taste in college sports teams) came over to point out that her Kansas Jayhawks also thumped Iowa State earlier in the week.

I responded that I wasn’t so sure that wasn’t to be expected. Right now Iowa State is held together by spit, baling wire and a walk-on point guard.

Shannon added that “He will defend Iowa State under any circumstances.”

What she said is undeniably true, but the way she said it indicated that she thinks that there was another way that it is acceptable to be.

Then she took it too far. She wandered down a road that is going to end poorly for her. Even though that road won’t officially end for several months.

She brought up that UNI had beaten ISU this season.

It is a fact. I can’t deny it, but I can make bold proclamations.

I made this bold proclamation:

“I guarantee that we beat UNI next year.”

There I said it. I got it out there. I might have went into some details about how next year’s Cyclone team would be essentially the first team in 3 years that wasn’t going to be built from scratch that offseason.

Then she made the mistake.

“That sounds like a wager.” Those words escaped her lips. I think she knew that she had a mistake as soon as the words had finished reverberating around the American Legion. Yet she gamely continued on and did not back down.

The terms of the wager have not been set, but I can hint at what I’m leaning towards. Let me just say that I think Shannon is going to look good in Cardinal and Gold.

Wednesday was indeed the night that we made our way up to Cedar Falls to witness the game.

I don’t think I need to go into details about the game. UNI fought their hearts out. They were able to force overtime, before the Cyclones were able to finally secure the victory by 5 points.

My impressions of the night are that McLeod Center is an impressive building. It gets surprisingly loud in there. UNI’s program is way better than Iowa State’s program, for the same price. It has pages. Iowa State’s program is a page. Their scoreboard is a little strange. It is split into two separate scoreboards, so it is a little difficult to find the score of the game. It was quite an experience.

I don’t want to go into the details of the wager, because I am not somebody that needs to gloat… but I would like to share that one of the outcomes of the wager was my acquisition of this sweet beanie that Shannon made. 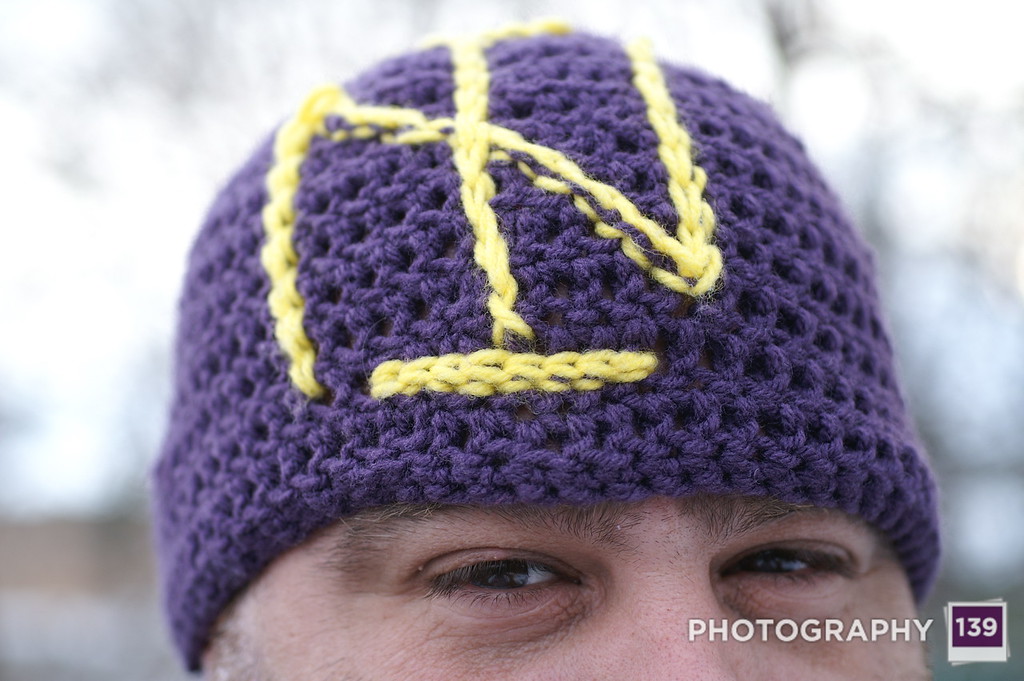 On a related but unrelated note (that might have been the equivalent of using the nonword irregardless)a fellow miner by the name of Schmidt (I have too many friends with the first name Cory) has designed the ISU Basketball equivalent of an Advent Calendar. We figure that Iowa State needs 20 wins to make it to a tournament this year.

He has placed 20 post-it notes next to his desk in the Mine. Every time ISU wins we take down a post-it note and celebrate with some candy.

Shannon probably won’t be happy that I share this fact, but when we were looking around the UNI Book Store for a food item that would be Panther related for the Cyclone Advent Calendar we failed. Then she noticed that there was a purple package of M&Ms (dark chocolate) and a gold package of M&Ms (peanut) she suggested we use those. In fairness she also said it would be a moot point.

Well, it was not a moot point… 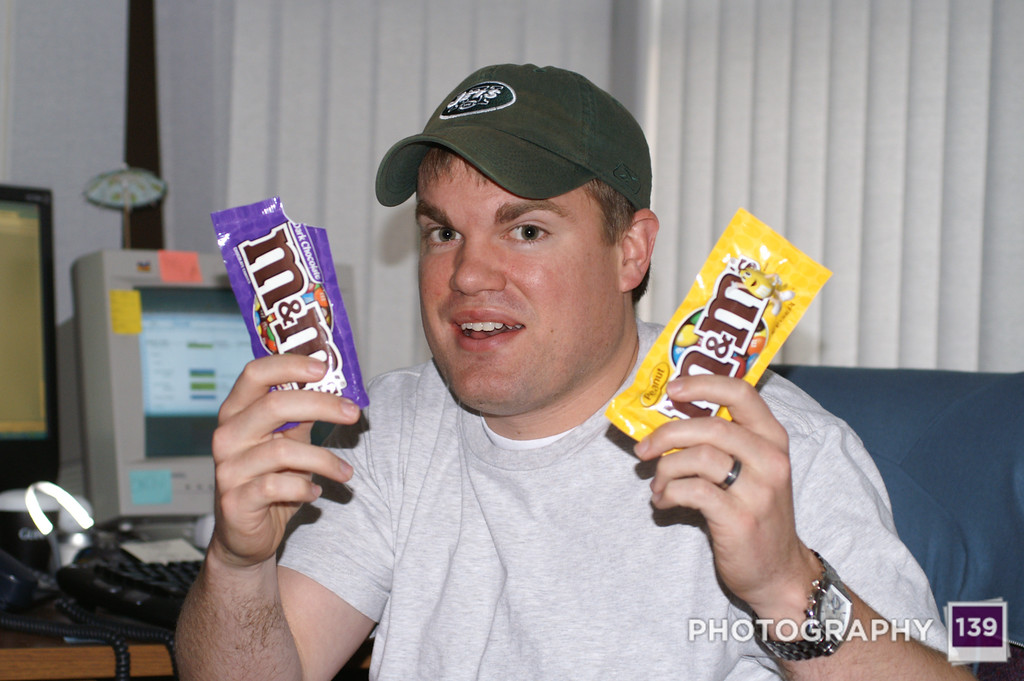 … it was an excellent idea. Panther candy was tasty!

We are planning on celebrating our victory Saturday over the Oregon State Beavers with Reese’s Peanut Butter Cups.

Mmmmm…. I wonder what Jayhawk is going to taste like.