The day before Halloween was a very special Friday Night Supper Club. It was special because I hosted it, The guest list was expanded, we had Casey’s taco pizza and Jay made the dessert.

Why these special things occurred can be traced back to one thing. At that FNSC I took custody of Sara’s pride and joy – Jupiter Moon.

Sara was heading to Florida for a Junck family vacation and she entrusted her 4 year old cockapoo to my care for a week. Sara decided to make the transfer at FNSC. I decided that it would be best if I hosted FNSC so that Jupiter wouldn’t just be dumped into a strange house without any familiar faces. Sara brought some additional familiar faces: Anirban, Cousin Amy, Jen and Derrick.

Jen put in a request for the Casey’s taco pizza and her wish was granted.

At about 11:30 the guests packed up and left Jupiter behind. He was not very happy to be left behind, but it began our week together. A week where I was reminded of the responsibilities of dog ownership that will face me in the spring. A week where I had an opportunity to man Jupiter up, just a slight bit.

The first night was a little bit rough. Neither one of us slept particularly well. Jupiter spent almost the entire night staring at the front door. He would occasionally join me in the bedroom, but he would just stare out my bedroom door for a few seconds and then return to his post in the living room. Staring at the front door.

Jupiter spent most of Saturday morning looking depressed. When Sara texted to ask how he was doing, I responded that he was suffering from Post-Sara Depression.

Sara texted back that she though all creatures suffered from Post-Sara Depression.

I took Jupiter outside and he helped me take down and store all of the yard furniture for the winter.

By the afternoon, Jupiter was less depressed and more or less just subdued. We listened to the Iowa State football game, made spiced apple cider and nachos.

Near the conclusion of the game, Jay came over and started his annual pumpkin carving. Jupiter seemed intrigued by this and enjoyed greeting trick-or-treaters.

After the trick-or-treaters, we watched a couple of old horror movies and went to bed. Jupiter tried to sleep with me, but he wanted to sleep on top of me. He figured out that wasn’t going to work and spent the night on the couch.

On Sunday, I got up early and tailgated for church. Only 3 of us showed up for the tailgate, but the revolution was definitely on. After church, I attended a Methodist Men Board meeting, where we discussed the upcoming chicken noodle brunch.

On my way home, my mom called and asked if I wanted to look over any of grandpa’s tools. I could have any of them that I wanted.

I was planning on taking Jupiter for a walk in the park and I knew that I didn’t want any tools, so I loaded Jupiter in the car for what I thought was going to be a quick look at some tools and then a trip to the park.

As it turns out, this was actually a clean everything out of the garage mission and while I didn’t take any of the tools, I took several things out of the “garbage” pile.

Jupiter got to assist in the manly work of cleaning the garage. Unfortunately, by the time we finished, there was no longer any time for the park. I took Jupiter back home and headed to Prairie City with the Degeneffes to try the state’s reigning tenderloin champ.

Shortly after returning from that pilgrimage, I got my basketball gear together and heading to Ames for our opening games of the Ames Rec League. To start the season, we were schedule a double header!

I got home dog tired. I showered and fell asleep. Jupiter slept that night at my feet.

I always skip bowling on the first Monday of every month for my Trustees meeting. The meeting this month was fairly short. We mostly discussed cutting a pew off at one end and nothing else that I can remember.

After the meeting I took Jupiter for a walk. We walked about 1 mile. He peed (or at least stopped to lift his leg) 12 times.

Tuesday night I took Nader out for his birthday with the Baiers. Because I got home so late, Jupiter and I didn’t do anything manly.

Wednesday night I go to open gym to work on trying to recover some semblance of what used to be my basketball game. I also got home too late to do anything very manly.

Thursday night I took Jupiter to Jen and Derrick’s for a dog playdate with Bailey and Jackson.

Dog playdate didn’t go as well as we had hoped. Jackson and Jupiter seemed to get along well enough. At least they were able to ignore each other. Bailey and Jupiter did not end up being the best of buds. Jupiter was a little growly. This ended in a tiff where Bailey and Jupiter had words. Gyro Guy pizza ended up flying through the air and some smashed into the kitchen wall. A terrible waste.

Derrick took Bailey into the other room and gave her a lecture. I don’t know what he said, but Bailey was on good behavior rest of the night. Jupiter and Bailey never got all that buddy-buddy, but they didn’t come to blows. More importantly, no more Jeff’s Pizza had to be wasted.

On Friday I went to FNSC at Golden Corral. This was the first time that we have ever been to Golden Corral for FNSC. It was okay.

Afterwards, Jay came back to my place and we watched a cheerleader movie with Jupiter. I think this might have undone much of the work I had done in trying to man him up, but Sara insists that cheerleading is a sport, so it it okay.

Saturday morning, we woke up and did a little more work around the yard. I was glad to see that some of my hard work had paid off. Jupiter was actually enjoying being outside now.

I concluded my alone Jupiter time by watching College Game Day with him.

I picked up Logan and went to the Iowa State-Oklahoma State game. After the game, we met up with Sara and Anirban at Great Plains.

Then Sara came back to Boone and re-claimed Jupiter. He is back in Beaverdale, but I am posting a few pictures from his week with me. 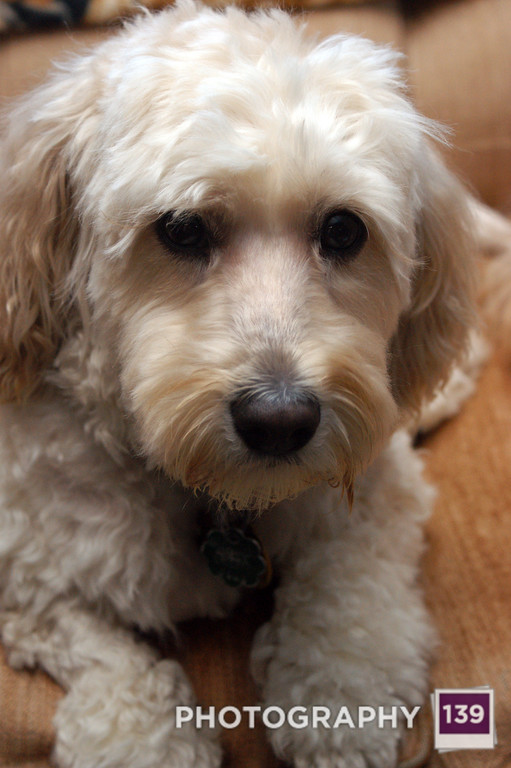 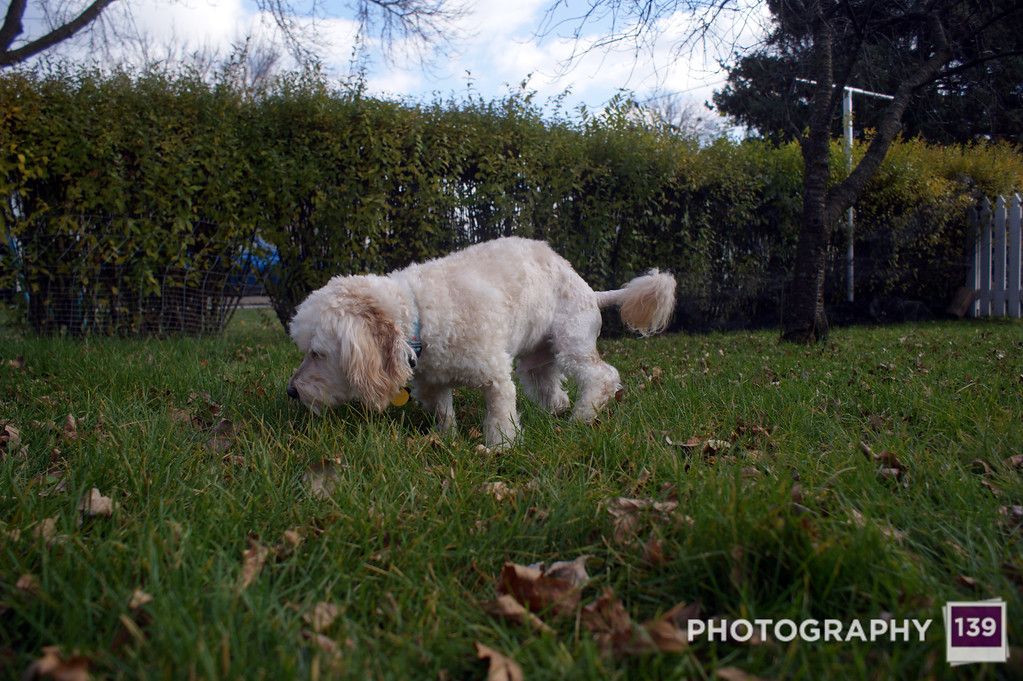 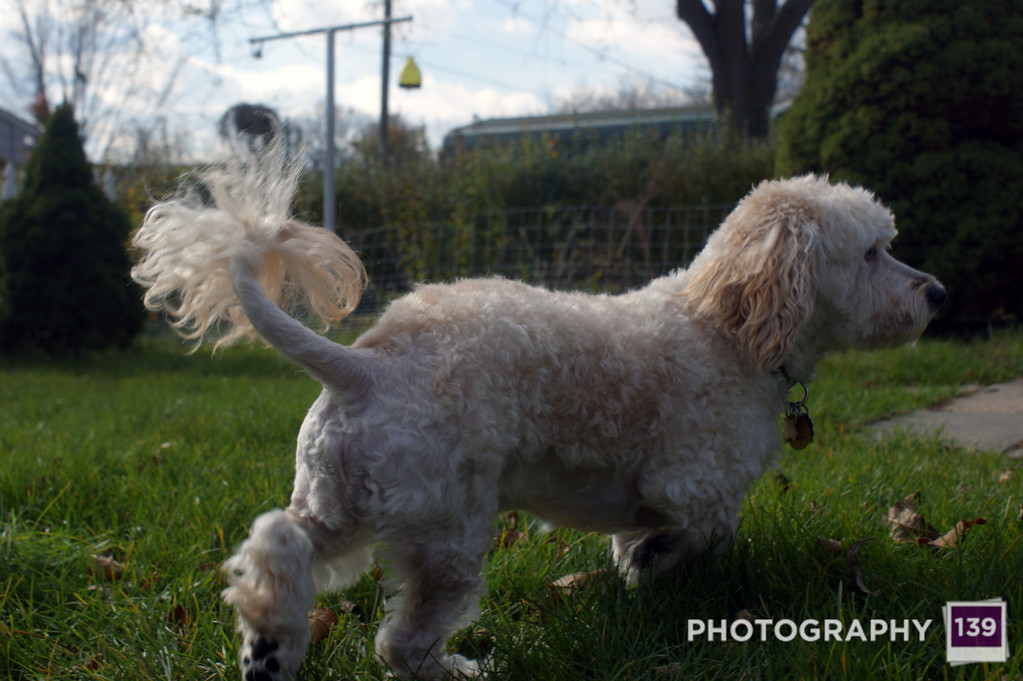 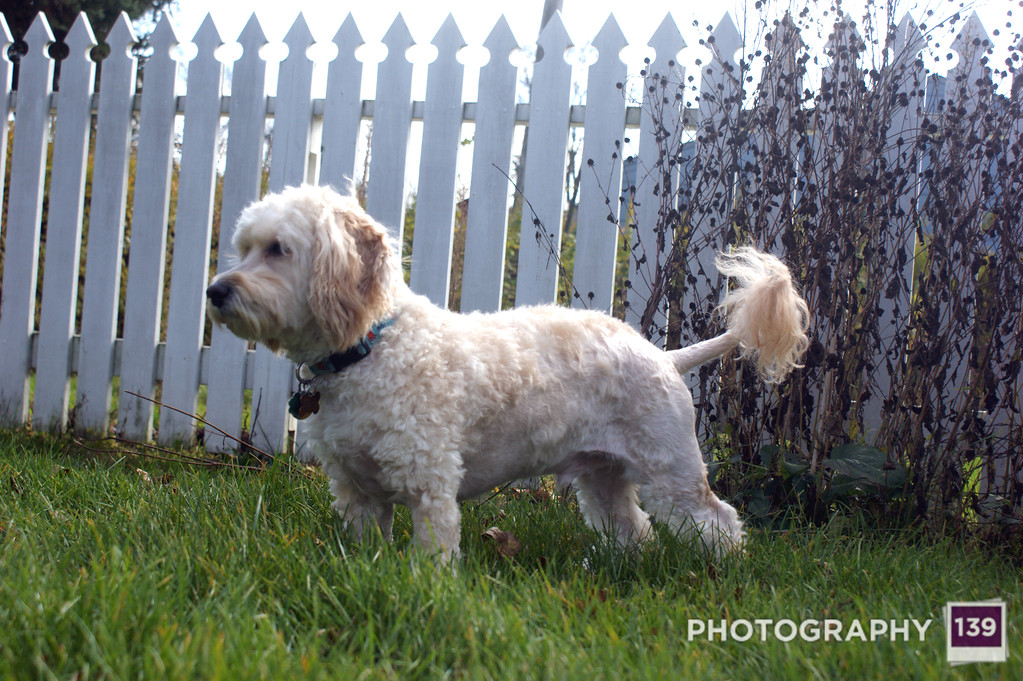 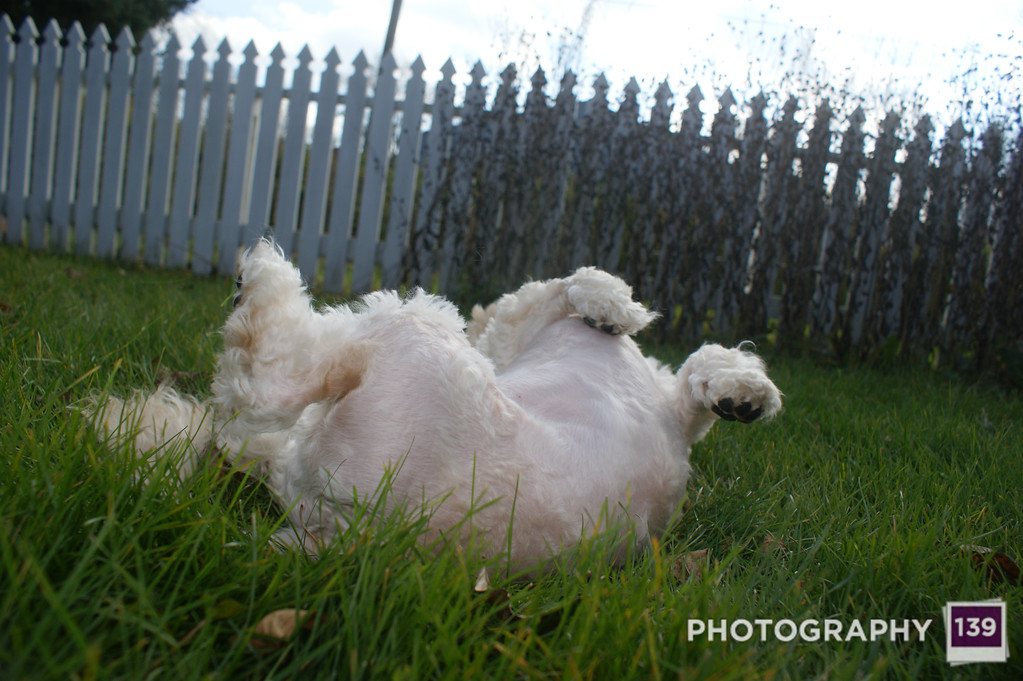 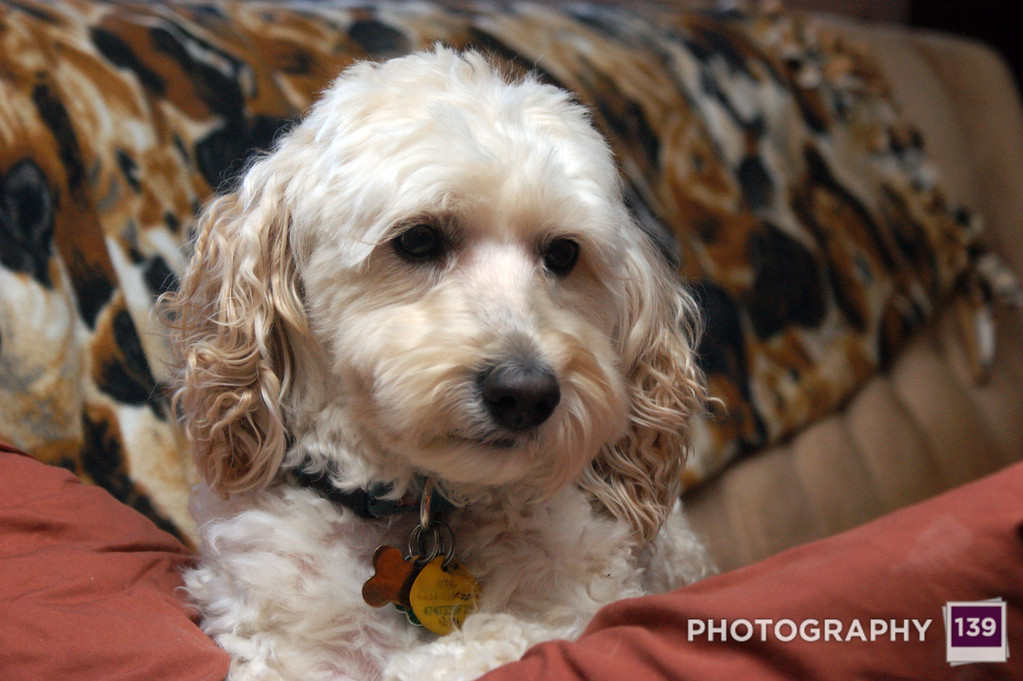 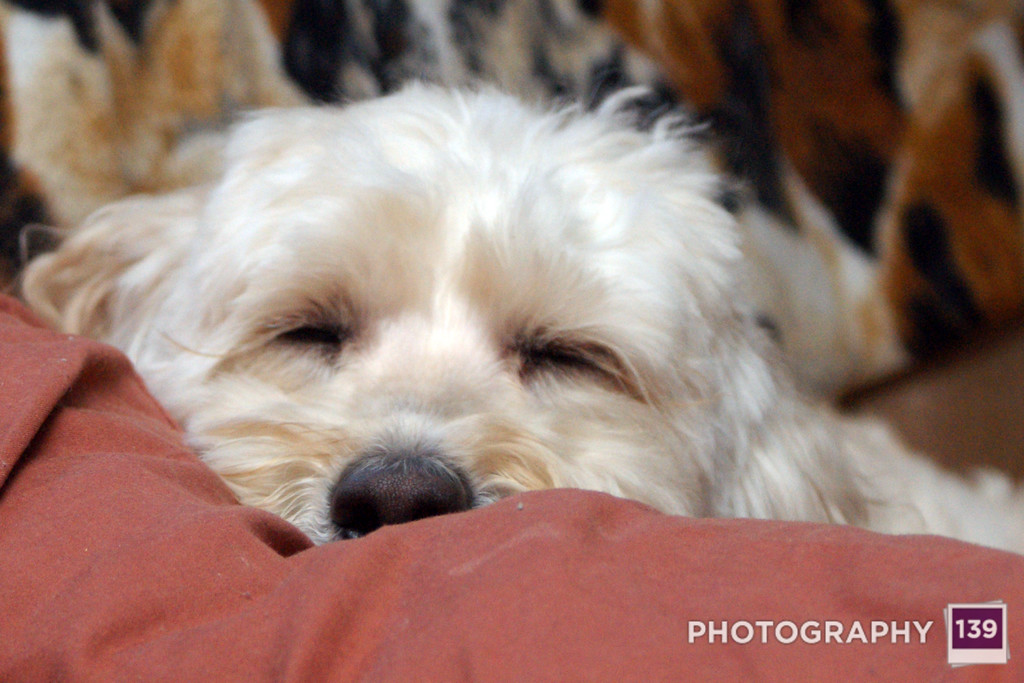 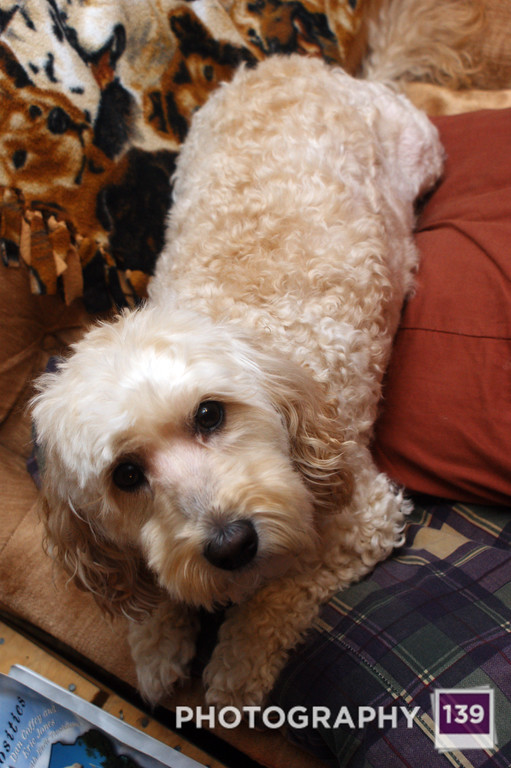 On Sunday, when I got home from basketball, it dawned on me that it would have been really nice to have Jupiter waiting to greet me at the back door.

I texted Sara to let her know that I missed Jupiter. She texted me back that he missed me too. I asked her to watch football with him. She declined.

But to honor the week I spent with Jupiter Moon, he has become the first 4 legged creature to be featured in the now defunct Snapshots Gallery.