Those with good memories will remember a few months back when I wrote a series of blogs about groups that I am in that have matching shirts. The keenly observant will recall that I said there were 5 such groups, but I only posted blogs about 4 such groups.

I was waiting until the final group had earned our way into being “blog-worthy”. That group made that leap from anonymity to greatness on Sunday night. That was just the conclusion of what was a phenomenal week.

The week started out to be not particularly great. On Monday morning I was nursing a nagging foot injury in my right heel from Sunday night’s brutal basketball doubleheader.

Then several great things happened. In no particular order (chronologically or in magnitude of greatness):

My week concluded with my Ames Rec League basketball game. Our team, The Little Dribblers, has struggled mightily season.I We hadn’t won a game yet this season. I had walked around the workplace guaranteeing victory, but Tony took my guarantee up a notch and suggested that we shave our beards if we lost on Sunday.

Based on how amazing my week had been, I was supremely confident that I wouldn’t be showing up for work on Monday as a dirty naked-face. I pledged myself to the pact.

My week kept getting better and better after the pact. When I walked into the gym on Sunday night I had no doubt in my mind that me and my Little Dribblers brethren would be walking back out of that gym 60 or so minutes later with our heads held high for the first time all season.

I should point out that when I say that we haven’t won a game this season, that doesn’t mean that we get close and lose it in the end. We have been on the wrong end of some fairly brutal blowouts. It is not an exaggeration to say that we have obviously become the girlfriend game for most of the foes in the league.

Maybe I should explain the concept of the girlfriend game to those that aren’t familiar with it.

This is the way that men think. I’m pretty sure most women would rather be at home watching Gray’s Anatomy or whatever it is that women like to do on Sunday nights. Either way, it is not paranoia that forces me to make the observation that when teams play us, there are lots of lady friends in the other team’s cheering section that aren’t there when they are playing other teams.

For the record, only Donner has ever brought his lady to one of our games. She came to our first game and hasn’t returned since. Yes, the Little Dribblers have been sans female fans since our first game. It is a sad state of affairs, but it is understandable.

That isn’t to say that we are devoid of fans. Both Doug and Joe have brought their sons to our games. Thankfully they are both too young to lose respect for their fathers based on what has transpired on the court before their innocent eyes.

Based on how awesome my week had been, I warmed up with extreme amounts of confidence. The only thing that gave me cause for pause was the fact that Tony did not show up. Why had Tony suggested a beard growing pact and then failed to even show up? Did he know something that I did not?

We still had plenty of firepower. Firepower we didn’t have the first time we locked horns with our opponents. A game where we fell in OT after running out of steam because we only had 6 players.

This time we had 9 guys. 9 guys with a wide range of talents.

The game started out with the Little Dribblers jumping on our opponent. We opened up a quick 7-0 lead. But our opponent didn’t show any quit. They rattled off 9 straight points to grab the lead, but an old-fashioned 3 point play by Donner put us up for good.

The game turned into a defensive struggle with neither team able to score much against the other team’s tough defense. The Little Dribblers settled into halftime with a 19-16 lead. Not a comfortable lead, but we were clearly in control of the game and it was our first halftime lead of the season.

During halftime I collected my thoughts and sent out a score update text.

The third quarter was all about defense for the Little Dribblers. Our tough 2-3 zone suffocated the paint and our quick guards closed out quickly on their outside shooters to prevent any open looks.

We held our opponent without a single point for the entire third quarter. We were forcing our will on them, but there didn’t seem to be any quit in them. It wasn’t until the final few seconds of the third quarter when you could finally feel the air come out of the gym.

Memory is a funny thing and I can’t swear to every detail that I’m about to describe, but it is not the exactness of the details that is of the most importance. It is the general idea of what happened that is of consequence.

With about 7 seconds left we missed a layup. Our opponent rebounded the ball and headed up court. A little in front of the three point line, Chad knocked the ball free from the man he was guarding. The ball bounced to another one of our opponents, but Corey was there playing in the jersey of his man. Corey knocked the ball free and start dribbling towards our basket. I saw that there wasn’t much time left on the clock so I sprinted towards our basket and called out for the ball. Corey, with his legendary court awareness, spotted me out of the corner of his eye and burned a pass through 2 (maybe 3) defenders. Despite the smoking velocity I caught the ball and took a dribble and went up for a layup on my weak side. The ball left my hands and banked off the backboard and through the hoop. As my feet (still nursing an injured foot) landed on the court the buzzer sounded signifying the end of the third quarter. The Little Dribblers bench jumped up and celebrated in pandemonium. Our opponents lowered their heads and walked back to their bench. There was still 10 minutes left to play, but that play effectively ended the game. We had crushed their spirits.

The last quarter played out. The buzzer sounded (after a strange player where one of their players came completely across the court to foul me, while I was just dribbling out the clock after securing the final defensive rebound of the game) and the scoreboard shouted, “Little Dribblers 43 Other Team 23”. End of losing streak. End of frustration. End of being the girlfriend game, well maybe not the last one.

We sat on the sidelines and soaked in the feel of victory for awhile. I grabbed my phone and fired off a few texts to interested parties. Perhaps they weren’t all that interested, but they got a text message any way.

It didn’t take long for the accolades to come streaming in:

“You really ‘dominated’ them!”

“Awesome! As it happens peggy didn’t end up getting the tickets.”

Jay said something cool as well, but I accidentally deleted his text message. Sorry Jay.

Jesse asked very kindly if he could touch a Little Dribbler jersey so he could know what it feels like to touch a winner. I obliged him in this request. 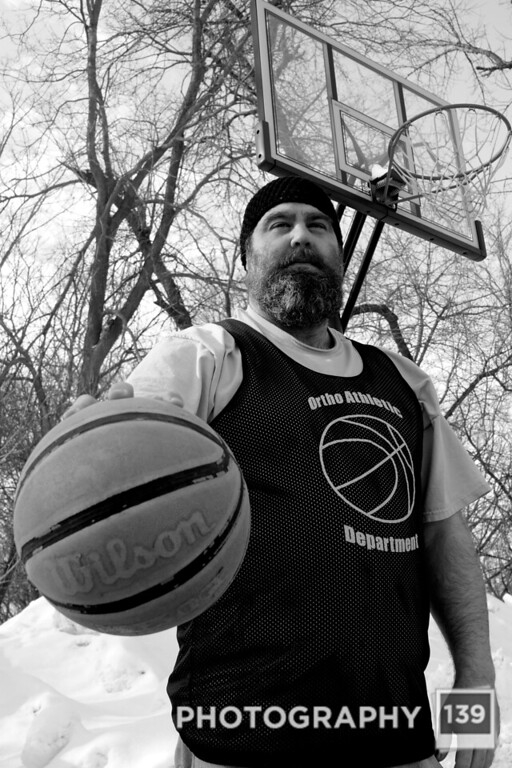 I’m sorry, the jerseys are not for sale to the general public.