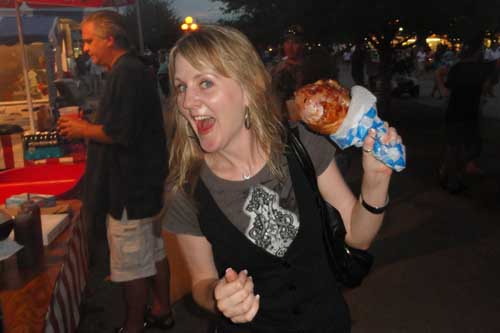 I made it to the State Fair twice this year. I went once on a Friday to see Maroon 5 with Jill. Then on the last day of the Fair I went with my Mom. I met up with Derrick, Jen, and Evie. We ran into Sara, Shawn, and Cousin Amy. Here are some pictures from those trips:

Jill in front of the picture of her at the Photography Salon.

Jill with her turkey leg.

The damage she did to that turkey leg.

Even though Jill is a Legacy Member of the Maroon 5 Fan Club, she felt our seats could have been better… I thought that they were pretty good. For some reason, Maroon 5 played before Train. Don’t know why, but at least we didn’t have to endure Train.

Evie is a toe wiggler!

We heard the following at this stand a lot: “1 fried butter on a stick and a bottle of water, please!”

You can’t imagine how hard it was for me NOT to photoshop that terrible Hawk logo out of this picture, but trust me, despite what his wardrobe is telling the world, Shawn is a good guy. He just doesn’t know how to dress.

With the 2nd Place Picture

With the Honorable Mention Picture

Some people view this as impressive.