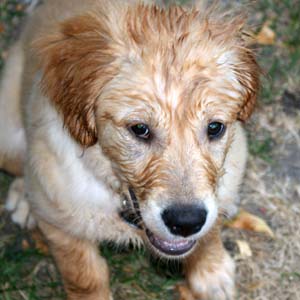 I hate the phrase “things happen for a reason” more than I hate any other phrase in the world. That doesn’t mean that I don’t necessarily believe in fate, but for the most part I don’t like fate. Its plans run contrary to my plans, no matter how hard I work on my plans. So fate can go suck an egg.

However, sometimes fate works out in my favor, even though I don’t know it.

One of those fate just screwed me over, but it ended up working out pretty well for me moments was when my wheel flew off my car on my way to Minnesota a few weeks back. I had a pretty sweet vacation planned, but it all went into the ditch with my wheel and more money than I care to think about.

I rescheduled my vacation for the last week in August. That movement of my vacation just a few days allowed me to complete Operation Puppy sooner than I anticipated.

I knew when I finally got a puppy, it would be while I was on vacation and I didn’t think that I would be taking a vacation for several more months, but I still checked several websites and newspaper (okay newspaper websites) for the puppy that I wanted. A female golden retriever.

A simple enough request, but there weren’t many in the area. Then an ad for a bunch of puppies showed up in the Des Moines Register.

I wrote them and they gave me the sad news, all of their female puppies were probably claimed. 2 were for sure. The other two were most likely claimed.

I wrote them back and let them know that if one of the females became available, I wanted to be at the front of the list. That was on a Wednesday. I resigned myself to the fact that I wouldn’t be getting a puppy for several more weeks or months.

Then on Friday they wrote me to tell me that they thought that one of the females might be coming available, but could not make any promises.

I made plans to drive up near Hubbard on Saturday to see the puppies. I figured that it would be a fruitless trip, but it wouldn’t hurt to see some puppies. The cutest most adorable kind of puppy: golden retrievers!

Then on Saturday morning I got an email saying that they had a female for me.

That afternoon Jason, Alexis, and I drove up to see the puppies. I put down a deposit and set up a day and time to come pick up my puppy. I worked it out so that I could pick her up on the Wednesday of my vacation as I came back down from Minnesota.

The next step was coming up with a name. I struggled with a name, but eventually with the help of friends a name was found. Here are some of the suggestions I received:

Willy: Cuddles or Miss Wiggles
Faust: Steele & Melanie
Jen: Mila
Jill: Daisy
Sara: Astrid, Mahtob and then she sent me a list of about 200 other suggestions.
Carla: Chloe, then she went out and bought a puppy and named it Chloe.

But it was actually a suggestion by Derrick that put me on the road to the name. While we were sitting on a bench at the State Fair resting, he asked if there was a female character from a Kubrick movie that I liked. I have to confess that Kubrick movies aren’t filled with extremely strong female characters. If you take out the prostitute from Eyes Wide Shut or the sniper from Full Metal Jacket, that really leaves you with Lolita and I’m not naming a dog after Lolita.

I toyed with the idea of Kubrick and then Coltrane as a name, but those were just too male sounding names. I was stalled.

Then fate took a hand again. Every morning I run shuffle on Media Player and then post whatever the first song that comes up to Twitter. Now, I know that nobody in the world cares at all what song I am listening to during that exact moment of the day. I do it as a reminder to the world that I have better taste in music than they do.

On August 24th a Miles Davis song was the song that shuffle landed on and I posted the following to Twitter:

“In a Silent Way/It’s About That Time…”-Miles Davis-In A Silent Way-If I were getting a male (puppy), I would name it Miles, Coltrane or Kubrick.”

“How about Naima? Unusual & fits the jazz theme…”

I had a name and a week later I had a puppy. Here are a few of the pictures from my first few days with Naima: