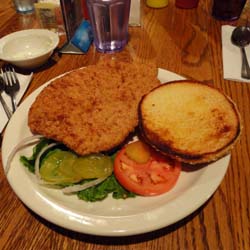 Recent events have forced us out of those front doors as the BK’s in Ogden was home to what we both considered the best tenderloin on the planet. But now BK’s has closed and become The Lucky Pig. If anybody tries to tell you that The Lucky Pig has a comparable or even better tenderloin than BK’s, that person clearly knows nothing about tenderloins. NOTHING!!!

However, this isn’t a journal entry about what is wrong with The Lucky Pig’s tenderloin. This is an entry about the greatness of the tenderloin served at The Country House in Colo. The New Reigning Tenderloin King!*

Here are a few pictures from our trip to Colo and our tasting of greatness.

Bow before your King!

Scottie D. Showing off the Tenderloin Me Enjoying the Reigning King!

Our Tenderloin Posse Squaring Up with the House

The Sassiest Waitress Ever!

The 2nd Sassiest Waitress Ever!

If you are interested in trying tenderloin greatness, The Country House is in Colo, right off US30. Next to the Twin Anchors Campground. Be warned, they don’t serve the tenderloin on Sundays, but they are definitely worth eating at on Sundays as well. They serve a giant spread family style on Sundays with flat out the best cole slaw I’ve ever had in my life. It is cheap too. $10.95 for a ton of food.

*The King until we find something better, but the bar has been set high!