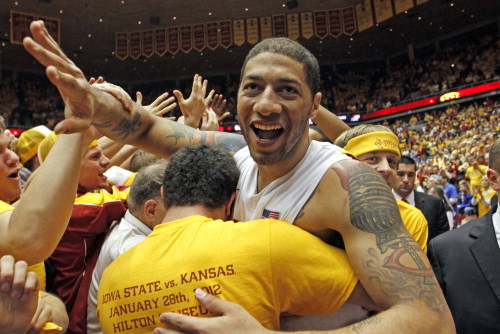 It is the time of year that is filled with sadness. Another college basketball season has come to an end. But despite the gloom that will set upon the land for many more months, it is a time of joy as well. We get to crown a new King of the Roundball Oracles. A new name goes on the plaque of immortals with these past champions:

The latest immortal is…

In the closes Roundball Oracle competition ever, Lowell beat Corey Faust on the tiebreaker.

I will be ordering Lowell’s trophy soon and will be presenting it to him in the very near future. I’m sure there will be photographic evidence to back this up presented in this forum in due time.

Another reason why it was a good year for the Roundball Oracles is that we set a new record with 29 combatants. Shattering the previous participation mark by several people.

Without further adieu, here are the final standings of the 8th Roundball Oracles Challenge:

Some people might think that I need to explain why somebody with my nearly infinite basketball knowledge could have fared so poorly, but I will not defend my lowly ranking. Truth is that my goal is just to beat Russell and the fact that I didn’t this year means that I will have to try harder next year. I cannot let RMK get the best of me two years in a row!

Even though the dust has barely settled on this year’s NCAA tournament, I am already very excited for next year’s season. I think that the Cyclones will be even better next season and I can’t wait to see them prove me right. I guess until the season begins anew, I will look forward to the Spring Football Game that is only days away!