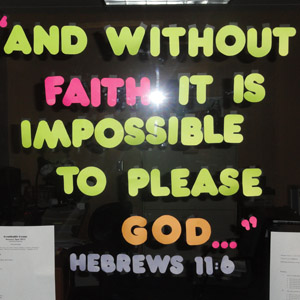 A couple weeks ago I had the great pleasure of helping chaperone the youth group from my church on a mission trip to Minneapolis.

As you have undoubtedly heard, my point and shoot went kaput on this trip, so I didn’t get as many photos as I wanted. However, with the pictures I had taken and pictures contributed by Sarah and Maddie I was able to put together this video of the trip to show during the church service on Sunday.

Of course, if you subscribe to this blog via email or RSS feed, you will have to go to the website to watch it.

One note on the video. I do think it ended up being the perfect song for the video and I really struggled with the song until I ultimately settled on this acoustic version of Live Like That by The Street Prophets.

I think this song and this version of the song worked perfectly for the video. I played with the original radio release, but I decided it was too hard of a song for our congregation. But I found an acoustic version of it on YouTube performed by The Street Prophets for KLove radio.

While searching for the perfect song I listened a lot of the Matt Maher station on Pandora while walking Naima.

Originally, I was going to go with Matt Maher’s Hold Us Together.

Then I changed to Brandon Heath’s Give Me Your Eyes.

Then I changed to Jason Gray’s Remind Me Who I Am.

Then I changed back to Matt Maher’s Hold Us Together.

But once I found the acoustic version of Live Like That, the choice was obvious, even though I love all those other songs.

Even though, you’ll see these pictures in the video, here are some of my favorite pictures from the trip:

Bible Study on a Hill

What 1 Ton of Rice Looks Like Before We Got There

What 1 Ton of Rice Looks Like When We Are Done with It!

Kiley and Sarah getting their hair done at Mary’s Place

Finishing Up at Feed My Starving Children

Blessing the Food Packs at Feed My Starving Children

Erica, Gabe, and CJ – the end of the frozen meat line at Emergency Foodshelf Network

Marshall, Jake, Alec, and Alan Working the Back of ARC

Alec and Grace Draining the 1 Ton Bag of Rice

Jake and Kids Showing Off their Creation at Mary’s Place

It was an amazing trip and I hope I asked back for next year’s mission trip.