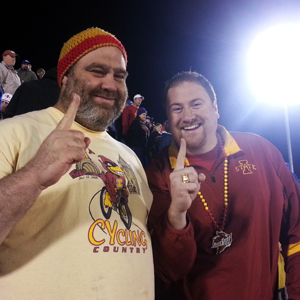 I was going to publish pictures that were related to Story County Philanthropy Day, but I think a more time relevant set of pictures would be a few images from Jesse and I’s trip to Lawrence, Kansas to watch the Cyclones shellac the Jayhawks. It should be noted that all of these pictures were taken with my phone, which has an excellent camera for a phone, but it is still a phone.

This was my first trip to Lawrence and I loved their campustown area. It reminded me that while Iowa State has the most beautiful campus, the fiercest mascot, gorgeous team colors, amazing facilities, the best set of head coaches, the prettiest co-eds, and the least date-rapey frat guys; our campustown area leaves a lot to be desired.

We dined at a place called Bob’s Smokehouse. Since Lawrence is a stone’s throw from Kansas City, we hypothesized that it would have dynamite barbecue. We were mistaken. Although Bob’s wasn’t terrible, it certainly isn’t in the same league with a Oklahoma Joe’s or a Jack Stack or Jethro’s or Jimmy’s for that matter. This is their chicken wing appetizer. We opted for the full pound version based on what 1 pound of chicken wings looks like at Pizza Pit. We were told they would be served on a bed of fries. That was a lie. We got a pound of fries and then had to play a game of find the chicken wings.

These are Alligator Bites. We were once again told that our alligator would be served on a bed of fries. Once again, the appetizer was 85% fries and 15% tasty, tasty alligator. Don’t worry, I got even. I left a scathing tip on Foursquare about their dirty appetizer scam.

Our waitress, told us that since we were getting fries with out appetizers, we would want to substitute the fries that came with our barbecue dinner for a second side. As you can tell, Bob isn’t overly generous with the portion size. The beans were the best part of the meal. The slaw was the worst. They have 2 sauces that are indistinguishable from one another. Our waitress warned us that this would be the case.

Not a terrible experience, but I will not return. Next trip to Kansas we will go across the street to Mexquito. This “balcony cow” was not above the barbecue joint, but at a coffee house or something lame like that.

I badly want this shirt! It was for sale in a used bookstore called The Dusty Shelf. No offense to Firehouse Books (if you are still in business), but I badly wish this store was in Ames.

Jamaal Tinsley is right, The Phog is “just another gym”.

Some guy. I’m sure he is important to Kansans. Took this picture mostly because of how awesome the Jayhawk logo used to be. A fellow Cyclone sitting in front of us took this picture for us. He was sitting with his dad, a Jayhawk, that was a pretty cool guy. However, he didn’t like it when I asked him if the reason why they have a pizza box folding contest in the middle of the 1st quarter is because that is what Kansas students do after they graduate. On my right side there were 3 more Cyclones from Mason City. The highlight of the trip for me (besides the W & the potential to go someplace warm this winter) was when a Jayhawk kid tried to taunt Jesse and I after the Cyclones went up by 17 or so points. He tried mock-imitating our cheering. We died laughing. Apparently not the reaction he was wanting, he tended to his own business rest of the game. By the end of the game, there were only Cyclones left in the stands. We moved down to be close to the team. Some Jayhawk fans yelled at us, “Its not like we’re Alabama!” Since Jayhawks are like the other evil twin to Husker fans (Huskers ONLY care about football, Jayhawks ONLY care about basketball) this must be similar to what it would be like to go to a basketball game in Lincoln. That being said, I was a little surprised at the bitterness of the Jayhawks in our section. They really hate Charlie Weis. The only person they seem to hate more than him is their quarterback.

I hope to be able to have a better organized trip to Manhattan next football season, but despite its brevity, this was still a pretty awesome trip.