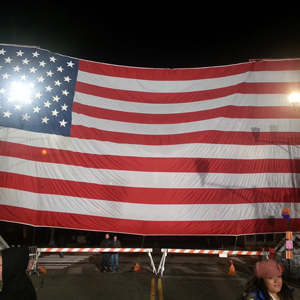 Monday night Obama made his last campaign stop ever in the East Village in Des Moines. I attended his first ever campaign stop in Iowa at Hilton Coliseum all the way back in 2007 with Jen and Derrick and maybe Willy. I figured that I should be there for the last. So Jesse and I went down there and got in line with at least 20,000 other people to at least say that “we were there”.

The line to get in was over 8 blocks long and it kept growing after we took our place at the end of it.

I didn’t take a good camera in, but I did snap a few photos of the event with my camera phone. So, understand that these pictures aren’t all that great.

The Capitol lit up to look impressive on television.

The backside of the rally space, from outside.

I love protesters as a general rule. Even when I disagree with them, I still love protesters. Maybe it is because I love making signs and chanting. But these protesters kept chanting: “1 More Day!”. Even if Romney didn’t get pounded on Election Night, he wouldn’t have taken over on November 7th. Work on your rhetoric people! Since this picture is so bad, I don’t know if you’ll be able to make it out, but 1 of my favorite protesters ever is in this picture. She is holding the sign that says “Real Women for Real Change”. I love this kind of rhetoric. When you take a word like “real” and misuse it to insinuate that other women aren’t “real” because they don’t hold your political beliefs or frightening levels of anger.

Another one of my favorite protesters of all-time is in this picture. The other is the woman (presumably not in the ‘real’ demographic) holding the sign that says “Short People for Romney”. What a delightful demographic to identify one’s self with! I also love the guy in the picture that isn’t holding a sign, but a coffee from Starbucks. He strikes me as a guy that doesn’t really support Romney. He just came down because he didn’t have anything to do on a Monday night and his buddy told him that protesting was a great way to meet chicks. Sorry. My apologies. A great way to meet “Real” Women. Incidentally short women too.

A sign outside of Zombie Burger. A chick standing outside Zombie Burger gave us a tip on how to get to the end of the line, that saved us several blocks of walking.

The American flag at the back of the rally event space.

After the speech, we wormed our way up to the stage. Snagged a pretty sweet poster to boot! Another weak photograph of the stage.

I actually wanted to run over and see if I could get my picture taken with the protesters, but the line was moving too quickly. Maybe next big protest movement or 2016.

I need to find out what other political movements short people are passionate about. Shannon?