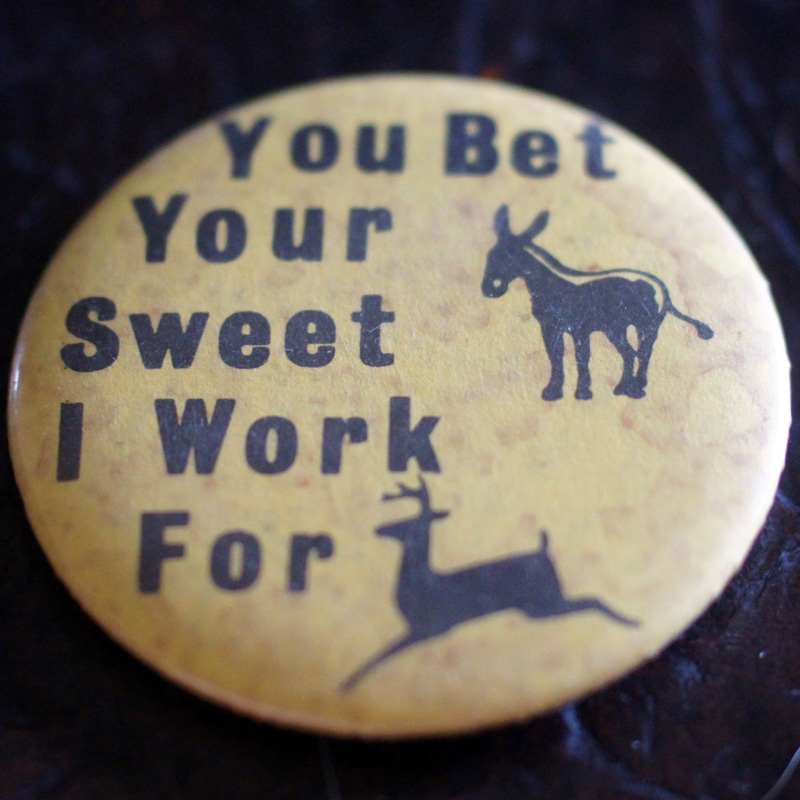 A Kind of Musing

I recently decided to photograph my button collection. I don’t actively collect buttons (I collect postcards my friends send me from their vacations), but I have a small collection in a fish bowl in my living room that I mostly inherited from my Dad. The rest have just, sorta, found their way to me over the years.

There is a decent mixture of local, political, and personal history in this collection.

More from the A Kind of Musing Series: Back when the University of Iowa’s football squad was relevant. An aside to this next button… The picture on this button was taken during my second year of little league. This year was probably the peak of my athletic career. I don’t think it would be inaccurate to state that I was the greatest defensive third baseman that league has seen and will ever see. I took pride in my defense when most kids at that level barely acknowledged that defense was even part of the game. Playing defense is just the inconvenient part where you have to do something while you wait for your turn to bat again.

Not me. I thoroughly enjoyed diving to knock down a screaming one hopper. Jumping to my feet and unleashing the cannon that was conveniently disguised as my right arm to send some poor sap that was dreaming of a two bagger when the ball left his bat, back to the dugout wondering what had happened.

However, the thing I learned most from this year of little league was the importance of rivalry. Not all victories are the same.

I learned this less over the course of two games.

I don’t recall the opponent, but I recall how the game ended. I was standing on 3rd base. The score was tied. Somebody from my team hit the ball to the outfield. I jogged home with the winning run. In my mind it was kind of anti-climatic. I would have preferred a race between me and the ball to home plate. Some poor guy that just wanted to sit in the bleachers and watch his kid play would be stuck making a decision on a bang-bang play at the plate.

But there wasn’t even a play at the plate. I touched home plate to win the game and I turned to return to the dugout to collect my belongings and assumedly head to Dairy Sweet for some kind of post game snack. To my surprise when I looked up from touching home plate, the manager of my team was running at me at full speed. He was a giant bear of a man and before I knew what was happening, he had picked me up and given me a hug.

I’d never seen him this happy. I didn’t even feel like I deserved this much affection. The ball had been hit to the fence. Anybody could have scored on that play. The kid that hit the ball surely deserved the accolades that I was receiving.

We were playing the Dodgers. We were ahead by 1 run. They had loaded the bases and there was one out. It wasn’t looking good for the Padres.

The batter hit a screaming line drive down the third base line. A ball that seemed destined to land in deep left field and bounce against the fence. Plating the runner on 2nd and 3rd and sending the Dodgers home victorious and making any personal trip to Dairy Sweet at least 3 times less sweet.

However, destiny had placed an 8 year old Brooks Robinson clone between that ball and the left field grass on that day.

I leapt straight up in the air and when my feet finally hit the ground again, that ball was firmly entrenched in my glove for the 2nd out. I glanced over to the Dodger runner on third. He stood about 3 or 4 feet off of third base. His mouth stood agape. His third base coach should have been screaming for him to get back to third, but he just stood there with his mouth agape as well. I took a couple of steps and tagged third base for the 3rd out. The Padres were going home victors on this day.

I walked to the dugout expecting my manager to come barreling at me again with another giant bear hug coming my way. After all, I had just won the game with one of the most amazing defensive plays that this little league park had ever seen, at any level.

But there was no hug forthcoming. Just a “nice play” and then we lined up and shook hands with our vanquished foes. This button represents the low point of my athletic career. My first year in the majors my manager was a drunk who showed up to most games and practices liquored up. I wore my yellow Padres hat to a couple practices and the drunk apparently could never be bothered to learn my name as he called me “Yeller Hat”, the entire season. I think the “yeller” part was due to the fact that he didn’t possess enough remaining brain cells in his dome to crash into each other to trigger the correct pronunciation of the really difficult to pronounce syllable “low”.