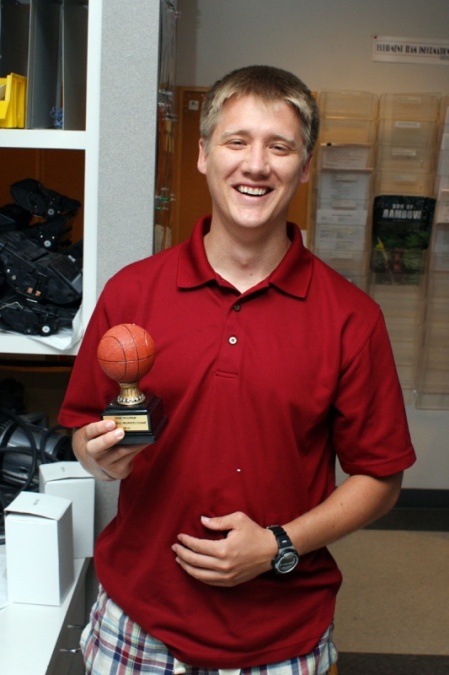 March Madness is upon us once again. Which means it is that time of year when I call upon all would-be-basketball-prognosticators to compete in an NCAA tourney bracket pool for the chance at everlasting glory, immortality, and a trophy.

As always, the Roundball Oracles is open to all interested parties, and yes to even uninterested parties as well. Regardless of basketball knowledge or basketball ignorance. Heck, I might even let my dog enter this year. After all, there is a tremendous amount of luck involved in this competition, so there is no reason for you to be intimidated by how well versed I am in the motion offense. You should only be intimidated by me on an actual basketball court. Even though I’ve admittedly lost a step, but I’m spending the offseason getting that step back, but that is an entirely different story…

As always, there is no entrance fee, but pride and my research indicates that pride is a low calorie snack, so swallow it and get in the game.

The champion will be given a trophy. I would normally at this time insert a picture of last year’s champion hoisting last year’s trophy, but I admittedly, still owe him a trophy.

Last year we had a record 29 prognosticators (as of this writing, 9 people have already signed up). I don’t think it would be too crazy to hope to break that record this year.

Lowell was able to chisel his place amongst the other basketball immortals that have managed to hoist the Roundball Oracles Trophy.*

So the metaphorical ball is now in your court. There are no guidelines for participation. This contest is open to all competitors: men, women, small children and the elderly.

Oh… the deadline for filling out your bracket is tip-off of the first game on Thursday morning.

*Technically he has yet to hoist the trophy.