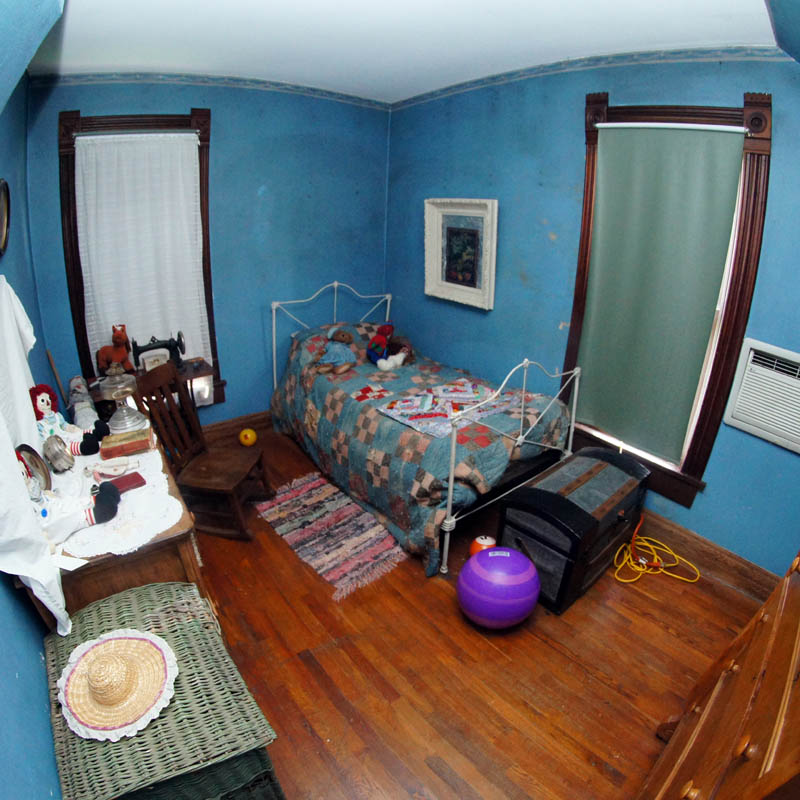 My Personal Photo Project this week was to photograph the most famous allegedly haunted house in Iowa. The Villisca Axe Murder House. I will state that I don’t believe in ghosts, but I am open to the possibility of their existence. In the same vein, I’m open to the possibility that Bigfoot exists, that aliens have visited our planet, or that it is possible some day Michael Bay will make a semi-watchable movie.

I have discussed visiting the Villisca Axe Murder House with numerous people over the years, but had never even came close to visiting it. I had actually resigned myself to believing that I would never actually go see it, but Shannon made it happen by taking me along to visit her brother who is a pastor in nearby Corning.

If you don’t know the story of the Villisca Axe Murders, here is a really short version, I’m borrowing from Wikipedia:

The Moore family consisted of parents Josiah (aged 43), Sarah (39), and their four children: Herman (11), Katherine (10), Boyd (7) and Paul (5). An affluent family, the Moores were well-known and well-liked in their community.[1] On June 9, 1912, Katherine Moore invited Ina (8) and Lena (12) Stillinger to spend the night at the Moore residence. That evening, the visiting girls and the Moore family attended the Presbyterian church where they participated in the Children’s Day Program, which Sarah Moore had coordinated. After the program ended at 9:30 p.m., the Moores and the Stillinger sisters walked to the Moores’ house, arriving between 9:45 and 10 p.m.
At 7 a.m. the next day, Mary Peckham, the Moores’ neighbor, became concerned after she noticed that the Moore family had not come out to do their morning chores. Peckham knocked on the Moores’ door. When nobody answered, she tried to open the door and discovered that it was locked. Peckham let the Moores’ chickens out and then called Ross Moore, Josiah Moore’s brother. Like Peckham, Moore received no response when he knocked on the door and shouted. He unlocked the front door with his copy of the house key. While Peckham stood on the porch, Moore went into the parlor and opened the guest bedroom door and found Ina and Lena Stillinger’s bodies on the bed. Moore immediately told Peckham to call Hank Horton, Villisca’s primary peace officer, who arrived shortly thereafter. Horton’s search of the house revealed that the entire Moore family and the two Stillinger girls had been bludgeoned to death. The murder weapon, an ax belonging to Josiah, was found in the guest room where the Stillinger sisters were found.
Doctors concluded that the murders had taken place shortly after midnight. The killer or killers began in the master bedroom, where Josiah and Sarah Moore were asleep. Josiah received more blows from the ax than any other victim; his face had been cut so much that his eyes were missing. The killer(s) then went into the children’s rooms and bludgeoned Herman, Katherine, Boyd, and Paul in the head in the same manner as their parents. Afterward, the killer(s) moved downstairs to the guest bedroom and killed Ina and Lena.

This crime was never solved.

The remainder of the Unsolved Series: To answer the most common question I’ve been asked, “No. Neither Shannon or I experienced anything spooky or abnormal while we were in the house. Nothing that could be remotely described as paranormal. If you want to completely grasp at straws because you have some kind of desperate need to feel like we were connected with the paranormal, the best I can give you is that the house feels kind of sad when you are in it.”

I was actually expecting to be disappointed in the experience, but I actually enjoyed it way more than I thought I would. The tour guide is the same guy that was featured in the episode of Ghost Adventures that was filmed in the house. He is very entertaining and tells many stories about the house and his experiences with reality television producers. In person, he seems a lot less convinced of the level of paranormal activity than he did on the show, but on the other hand, he doesn’t go inside the house on the tour either. He answers your questions in the upstairs of a barn that has been constructed on the property and then you tour the house on your own.

For a large fee, you can spend the night in the Villisca Axe Murder house. This is something I would actually be willing to do at some point in the future.

Next week’s Personal Photo Project will feature flowers of some kind again. Maybe the hibiscus.