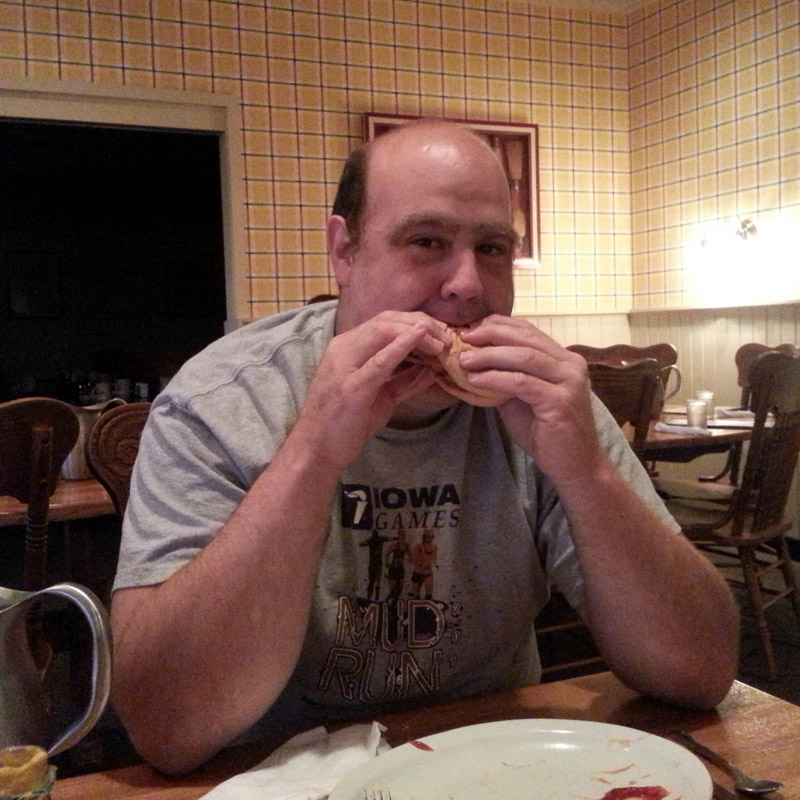 I recently made a trip with Logan and Teresa to see Ernie in Kuttawa, Kentucky. We were leaving in the evening on a Wednesday night, so we would be eating supper on the road before we nestled down for a Motel 6 nap.

As you can tell by either listening to my stories or perhaps even just by looking at me, a scary amount of my journeys are food related. Now this journey to Kentucky was not food related, but that didn’t mean that I couldn’t engineer a food related stop along the way. A food related stop that would fit into the narrative that is my life.

I contacted Teresa to see how long we would be on I-80, before we made a right turn and began our descent into the south. If we were going to make that turn on the Avenue of the Saints, I was going to try and stop for food at 61 Chop House Grille in Mediapolis to try the state’s reigning Best Burger, as crowned by The Iowa Cattlemen’s Association. An organization that I have some things in common with… we both like to eat beef and both have zero respect for the Boone County Fair Board.

However, our right turn wasn’t scheduled to occur until we were fairly deep into the Land of Lincoln. That meant I was going to be able to try the tenderloin that won the Best Tenderloin in the State of Iowa (the only state that matters – when it comes to tenderloins) in 2011 at Gramma’s Kitchen in Walcott. As given by the Iowa Pork Producers Association. An organization that I have one thing in common with… we both like to eat pork, but an organization that clearly doesn’t know anything about the pork tenderloin. The Cyclone State’s flagship menu item! Do I need to remind you about the Goldie’s Ice Cream Shop fiasco. You remember, right? Where the creator of the sandwich showed such little passion for his creation that when asked his inspiration he mumbled out, “well we needed a tenderloin for the menu.” Yea, Iowa Pork Producers, your track record isn’t the best.

Even though the tenderloin was crowned two years ago, I had yet to notch it on my waistline. You see, in addition to having an unreliable automobile, I don’t travel to “that side of the state” very often. It is lousy (in every way imaginable) with Wal-Mart Hawks*. So this was going to be a good thing.

Sadly my friends, it wasn’t a good thing. This was easily the worst part of the entire trip. The only other things that might even be in the conversation would be when my sister freaked out when we saw a homeless person panhandling or when Logan kept insisting that blueberries were superior to raspberries or when we had to part ways with Mountain Man on the banks of the Ohio River.

Here are a few pictures of the disappointment. I will note that these pictures were taken with my camera phone and they are as dark and dreary and as lousy with digital noise as the whole experience was in person. Let us start with the obvious. This tenderloin is battered. I repeat battered. Not breaded. Who batters a tenderloin? Besides those freaks up in Minnesota and lets face it, Minnesotans know nothing about the tenderloin. In fact, I do have a word for people that batter a tenderloin, but it is too profane to be used on this website. You know that I keep Photography 139 a family friendly website. And many of you know that I consider the use of profanity to be a sign of low intelligence. However, there is the occasional time when mainstream vernacular doesn’t quite cover the essence of a situation. There are times when you have to reach into the gutter and swoop up a couple choice 4 letter words because they are the exact right words for the situation.

I’m not going to share the word I use for people who batter tenderloins (besides Minnesotans), so this is the little exercise (don’t worry, it isn’t cardio) that you will have to do to get near the word that I’m thinking about as I type this journal entry.

Think of the most profane word you can possibly think of. A word that you would be ashamed to use in front of your children. A word that if somebody used it to describe your mother, you would immediately be inclined to choke them out.

That is the word that I use to describe people that batter tenderloins.

I knew we were in trouble immediately. Gramma’s Kitchen shares a building with another restaurant. A name that I do not recall but it has some sort of autosports theme. This co-restaurant was way busier than Gramma’s Kitchen. Red flag one.

Secondly, the interior of Gramma’s Kitchen has all the soul of a corporate franchise hell Country Kitchen. I normally don’t care too much about restaurant atmosphere, but when I’m tenderloining, I want the feel of a mom and pop shop. I don’t want the restaurant to feel like it was pooped out of the business end of the Play-Doh corporate franchise restaurant fun factory. Red flag two.

Third, our waitress had all the personality of a Lots of Value can of peas. I don’t demand that a server being needy or exuberant. Attentive and enthusiasm can sure go a long ways in helping a dining experience. Red flag three.

I should confess that the menu also described the tenderloin as battered, but I flashed right by that when I read “quarter pound”. I shouldn’t have. I should have folded the menu nicely. Thanked the waitress for being easy to forget and walked across the street to the World’s Largest Truck Stop and got an orange julius for the road.

But, I didn’t notice the offensive word “batter”. So when the mini tenderloin was placed on my plate I first thought that they had brought me the wrong thing. In fact, I thought that the waitress had walked to the nearest Long John Silver’s and picked up a fish and fries combo, came back to Gramma’s Kitchen, and placed one piece of Long John Silver’s fish on my bun. Trying to pass it off as an award winning pork tenderloin.

I asked the waitress for catsup and mustard. Dressed what I was hoping wasn’t a piece of fish and prepared to be surprised.

Only, I wasn’t surprised. The tenderloin was as bland and tasteless as I’ve ever had. It was perhaps worse than the one in Stanton that I didn’t even bother to review.

I can only come up with two positives from the experience:

1. They toasted the bun.
2. The tenderloin was so small that at least the disappointment didn’t last long.

As you may have guessed, I badly need to get a good tenderloin in me to help me forget this dreadful experience. I need to do this soon!

*As many of you know, the difference between a Cyclone fan and a Hawkeye fan is this: A Cyclone fan is college educated, usually with a degree from the finest land grant university in this nation. A Hawkeye fan is usually just somebody that is really good at shopping the Wal-Mart clearance clothing rack.