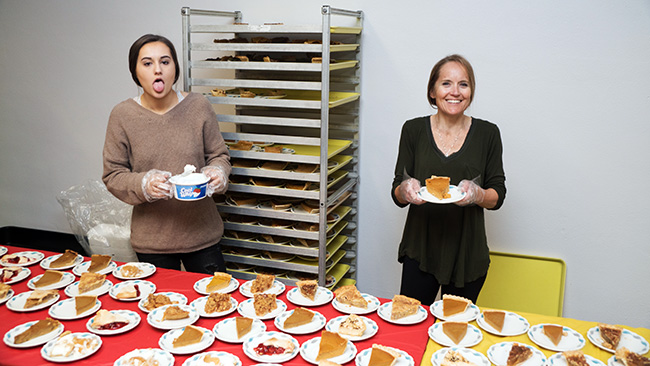 On Thursday morning I got up and went down to the church (Boone First United Methodist represent!) to take photos of our annual Thanksgiving. This is the second year in a row I’ve photographed the event. From the initial looks, I’d say that we served more than double what we served the previous year.

After hanging with the church family, I went to my Mom’s house for my family Thanksgiving. As usual, it was great. As usual Mom’s cooking was on point. Teresa’s French Silk Pie was delicious as usual. We watched SING and Alexis put up the Christmas tree.

Friday I got up and did some G33 classified business, but it was lots of fun. Even though the cheating was even more rampant than usual.

At noon I went to the Wal-Mart and rang the bell for the Salvation Army. One of my favorite things to do every year. For the people watching aspect alone.

Friday night I went to Boxholm and had a supper prepared by Becca and Bethany. It was kind of a surreal experience because we had the meal in Shorty and Doris’ home. All their stuff is still there, but now their stuff is accented with Tim’s style. Which isn’t bad, but it is weird. However, Bethany and Becca rocked the meal. Turkey and duck?!? Insane!

Saturday morning Dae Hee and I hit the road for Manhattan to see Nate and Laura, plus watch the Iowa State Cyclones battle the Kansas State Wildcats in football. On the way down there we stopped at a Waffle House in St. Joe’s because we were hungry and I love me some Waffle House. However, the Waffle House experience was marred with tragedy. I was mistaken for an Iowa Hawkeye fan by a group of Nebraska fans. It took me awhile to figure out that they had mistaken me for such a low beast as a Hawkeye fan because I was blatantly dressed like a Cyclone fan. It just put a pall on the entire experience. I couldn’t even properly enjoy the road waffle that Waffle House generously gifted us.

The rest of the trip to Manhattan went without incident. Mostly Dae Hee sleeping and me explaining every song of HAMILTON to a sleeping Dae Hee.

We lunched at a place called Bourbon & Baker. It is a small plate restaurant and I would recommend it. I’d highly recommend their chicken and waffles and that isn’t just my love for waffles speaking. #wafflelife

After lunch Nate and Laura dropped us off at Vampire Stadium. Nate scored us great free seats from some old retired professor dude. We sat on the 40 yard line in actual seats. Other than them being in literally the smallest rows in the history of rows and being surrounded by Purple Kansans, it was a great experience. Until the 4th quarter. When all of a sudden it was as if the Vampire had called up Bill Self and asked to borrow his personal refs.

What particularly hurt is when Kansas State blatantly interfered with Iowa State’s all-world receiver Allen Lazard. The refs threw the flag, because it was pretty blatant. Then got together. Picked up the flag and then tried to pretend that they were decent human beings, which they obviously are not. If they make the correct call there, the game is over and Iowa State leaves Manhattan with a victory and all is right in the world.

But I think this tweet by Lazard really puts a comedic spin on the deal:

What made the loss almost worse is the fact that Purple Kansans are so incredibly nice. At least 15 of them came up to me or Dae Hee to thank us for coming to their stadium. To tell us that we have a great team. It was a great game. In my state of mind at the time, I almost would’ve preferred an obnoxious Hawkeye or Husker or Jayhawk fan.

After the wave of Purple Kansas Nice finally finished washing over us, Nate and Laura picked us up and Road Rage Laura took us to dinner at the Taphouse. Another Manhattan eatery I would recommend. Their Korean Wings are delicious. Their house brewed root beer was good, but not great. Very strangely they served it on ice. Must be a Purple Kansas thing.

After dinner I cashed in my chips and called it a night. I was physically and emotionally drained.

Nate got a text in the morning from Bethany that Nora was sick. We decided to skip breakfast and hit the road.

On the way out of town we stopped at Manhattan Hill. 8 AM. The only people there were Cyclone fans. It was universally agreed upon that we were all still pissed. We hopped in the car and headed home. That little Manhattan Hill therapy session definitely helped my mood a bit.

But I really brought you here to share some photos from church’s Thanksgiving meal: The church server 521 meals on Thanksgiving! What an incredible blessing!