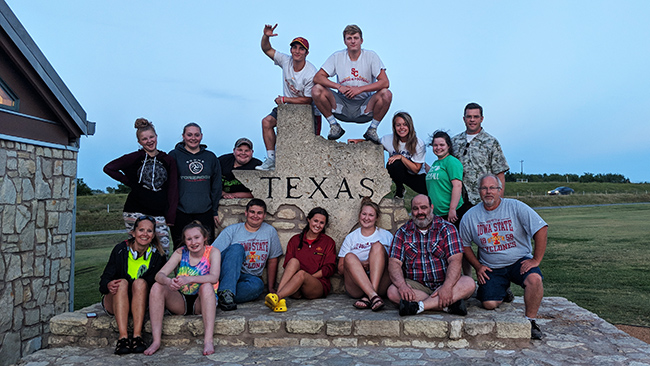 A few things I should clarify before I get into my mission trip experience.

For the 4th straight year, we booked our mission trip with YouthWorks. I have been on 7 youth group mission trips now. YouthWorks is by far the most organized group we have ever been with. They have you organized from 6:45 AM to 11 PM.

We decided to take our Mission Trip to Houston because of Hurricane Harvey. Plus it was farther away than our past mission trips, which appealed to the kids on the trip. A couple of them badly want to go on a mission trip to a foreign country. Texas is kind of like another country. So close enough.

This is the first year that YouthWorks offered mission trips to Houston, so it was a learning experience for them as well. When they got back to us about some of the details of the mission trip, they originally stated that we actually would be going to Beaumont, which is about an hour east of Houston. Then a few weeks before we left; Beaumont became Vidor. To this date, nobody I know knows how to pronounce Vidor.

Vidor is just east of Beaumont. If you do any research on Vidor, you will find out it is considered one of the most racist towns in America. It was a Sundown Town. Meaning at one time, white people were the only people that were legally allowed to be outside after the sun went down.

Vidor is allegedly not as racist as it once was, but I only saw one black person my entire time there. He didn’t live in Vidor.

Now that you have some context, let’s discuss Day 1 of the Mission Trip.

We gathered at the church about 7 AM. We took the obligatory group photo: Then with Autumn. (Can you find her?)

We prayed and then hit the road. 2 big white vans and the Sharps in their own vehicle taking a separate route.

Houston is about 15 hours in the car, without stops, so we planned on stopping for the night in Saginaw, Texas at a Methodist Church to stay the night. It was going to be a long day in the car.

We stopped somewhere in Kansas at a McDonald’s for lunch. The first time I’ve eaten McDonald’s since January 15, 2006.

Shortly across the Oklahoma border we stopped for gas.

It was a gas station/casino. It had the grossest bathroom I’ve been in since a Road Ranger in Illinois that still haunts my dreams. We tried to stop in Pauls Valley, Oklahoma for supper, but the whole town lost power, so we went to the next town.

We stopped at this super sketch A&W in a gas station. It only had 2 employees.

They weren’t real happy to see 15 customers come in at once. But they managed to serve us. But behind the sketchy gas station: Goats!

I think Kolbe might have his own goats at home. One of the goals of the trip was to make it to Texas by sunset so we could take pictures with this. It threw me off how short the days in Texas are. Megan and Kolbe (who are significant others, but for some reason wanted to tell the YouthWorks kids that they were twins). We got to the church in Saginaw about 9:30 PM. Staying there was quite an experience.

I was impressed with the church’s commitment to technology. They had audio visual inputs all over the place. They had a computer kiosk where you could make your offering. The checked people into their Sunday School with scan cards.

The Baptist Church we were staying at in Vidor had cots, so we made a calculation that we didn’t need to bring air mattresses for one night in Saginaw. This was a slight miscalculation. This church had the hardest concrete floor covered with the thinnest carpet in the world. It was a hard sleep, but the people at the church more than made up for the experience.

We went to bed and called it a successful Day 1.

Not pictured: Kolbe’s infatuation with the song CONVOY, which he mistakenly thought was from the movie SMOKEY AND THE BANDIT. Kids.