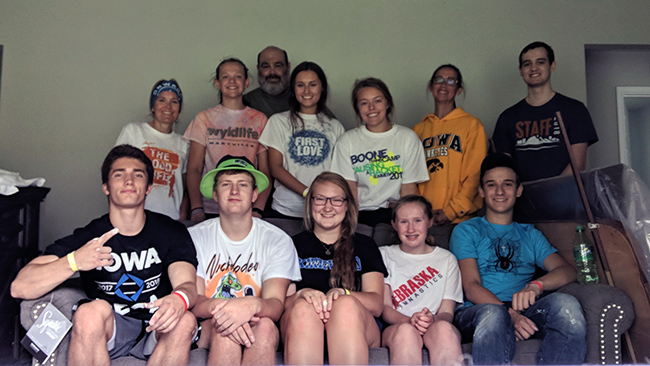 The third group from Bone First United Methodist Church was the Rattlesnakes. They had breakfast cleanup on Wednesday morning.

There was a bunch of donated furniture in the building where we were staying and a lot of it came from Iowa State University.

Cleaning up after lunch prep.

For the first time all week we could see some blue in the sky!

Megan and Mackenzie finishing up in the living room.

Cleaning up the ceiling rollers.

Anna and Ellie from Missouri packing up the tarps.

Jordan cleaning up the floors.

Tiffany getting paint out of Mackenzie’s hair.

Jordan and Anna finishing up the trim.

The Cowboys, without Ellie from Missouri!

With Ellie from Missouri. Can you find her?

On our way out of the house that had been our work site all week, the daughter of the woman who owned the house stopped by. She started crying while she was thanking us for our help. Some of the kids cried. I held strong though. For the most part.

Next we went to house where we unloaded drywall.

Maci. The anchor of the drywall team!

Allegedly Kolbe and Anna are Big Hosses. Either they don’t know what that means, or I don’t. Take your pick.

The Cowboys had dinner prep.

Look at all this pizza the Cowboys made!

Luckily Megan was trained in knife work back in Boone by Brad, one of FUMC’s master chefs.

Okay, this is bizarre. I drove all the way to Vidor, Texas to see that 2 of my cousins are chaperoning a church in Missouri. Kari and Wendy. We are like 3rd cousins or something. They knew me, but honestly I didn’t know them. I know them now though.

I’ve been telling you about how much Kolbe LOVES the song CONVOY. Below is video evidence

The group that does lunch prep has to do a creative way of introducing supper to the rest of the group. This is how The Cowboys introduce supper!

Wednesday night we were told that we were no longer allowed to play secular music. Now, we weren’t the ones playing the music, it was the YouthWorks crew that was playing secular music. Normally YouthWorks plays Christian music, but this year I would describe the music as “Humble Narrator’s Junior High Mixtape”. Lots of AC/DC and Guns’n’Roses and Bon Jovi.

I texted Pastor Sarah, about the secular music ban. She wrote back, that we were lucky the Baptists didn’t find out we were dancing in their building.

I texted to Alisa and she texted, back: “Were they playing Cardi B.?”

The Cultural Event for Wednesday night was going to the Baptist Church for Bible Study. The boy and girls were segregated into separate groups. The boys group listened to Part 3 on a 4 part series on “How to be a Real Man”.

Part 3 of being a “real man” is being romantic with your woman. The teacher used the example that how he is romantic with his wife is listening to her talk.

This was followed with a lesson how to use a compass.

I confess that it was incredibly boring and I began staring at the floor and counting the time until it was over. Then all of a sudden I heard an audible gasp across the room.

The compass guy had pulled a switchblade-lie knife out of his pocket. He was trying to show that the metal in the knife threw off the compass’ reading of true north. It was then that Andy pointed out to me that the compass guy was carrying a gun. Texas.

From what I gathered, the girls talked about “being nice”. Particularly in a blended family.

After worship and church time, the boys “serenaded” the girls with John Denver’s COUNTRY ROADS.

After that, I stayed up until 1 AM talking with Chris the Youth Pastor from the Missouri church and Donovan. It was 3 hours of conversation about the church and it was great perspective. It was perhaps the low key highlight of the trip for me.

I knew Thursday morning was going to come quick, but I’ve had later mission trip nights than this one. At least this one wasn’t spent in a hospital Emergency Room.