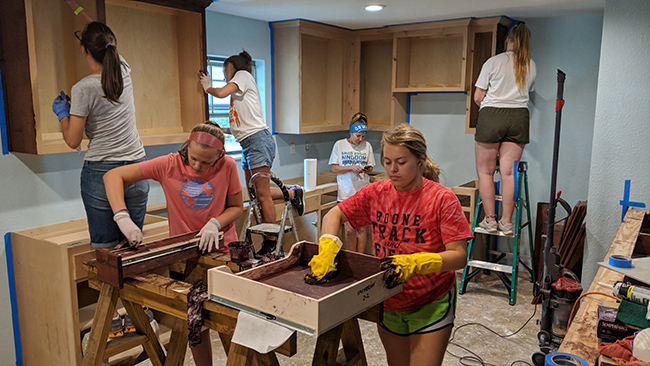 Thursday was the last day of full mission trip activities.

The Rattle Snakes had breakfast prep.

The Cowboys had building maintenance.

Other Chris was nice enough to take the trash out for us in the rain.

Since we were going to a new house, we were told that we needed somebody from Nehemiah’s Vision to take us to it. They didn’t show up for a good 45 minutes after we were supposed to start working. We lost an hour of work time.

Jordan getting a workout in.

YouthWorks shirts. They usually give away a shirt at the end of the mission trip. They didn’t do this year. So we used Methodist Men money to buy a shirt for every kid that wanted a shirt.

Ways they can take what they learned on the Mission Trip home with them.

Waiting almost an hour to even leave: thumbs down.

A kitchen full of stainers.

When we got back to where we were staying, we were greeted with the news that the plumbing in the bathrooms had stopped working. No showers or toilets. However, they had a trailer on site that was converted into showers.

Thursday’s shower, quite frankly it was a big upgrade over the showers that were in the building. The showers in the building were designed for midgets. Anorexic midgets. Which is also the name of my new spoken word album dropping in time for Christmas shopping.

Kids waiting for the adults to be done showering. Sidenote: Andy got locked in to his shower. Somebody had to come help him out.

Anna is always throwing shade at her dad for eating gas station hot dogs, but she never had one. So we made her eat one. She was not impressed. She was right to not be impressed, but at least we pushed her outside of her comfort zone.

This ice cream man was the only black person I saw in Vidor the whole time we were there. Remember I told you about Vidor’s racist past. He did not live in Vidor. With Methodist Men money we bought ice cream for everybody on the mission trip.

Thursday was Summer’s Gotcha Day. The awesome staff at YouthWorks made Summer a cake to celebrate! If you don’t know what a Gotcha Day is, it is the day when a new member of a family* during the adoption process.

The last full day of the mission trip is always an emotional day. As the kids (and yes adults) realize that they will not being seeing the family** that they have spent almost every moment with for last 4 days.

The final worship service ends with a foot washing ceremony. One of the YouthWorks staff washes the feet of the adults. Then the adults wash the feet of the kids in their group. The first time I thought it was extremely weird. I know the story about when Jesus washed the feet of his disciples:

13 It was just before the Passover Festival. Jesus knew that the hour had come for him to leave this world and go to the Father. Having loved his own who were in the world, he loved them to the end.

2 The evening meal was in progress, and the devil had already prompted Judas, the son of Simon Iscariot, to betray Jesus. 3 Jesus knew that the Father had put all things under his power, and that he had come from God and was returning to God; 4 so he got up from the meal, took off his outer clothing, and wrapped a towel around his waist. 5 After that, he poured water into a basin and began to wash his disciples’ feet, drying them with the towel that was wrapped around him.

6 He came to Simon Peter, who said to him, “Lord, are you going to wash my feet?”

7 Jesus replied, “You do not realize now what I am doing, but later you will understand.”

Jesus answered, “Unless I wash you, you have no part with me.”

9 “Then, Lord,” Simon Peter replied, “not just my feet but my hands and my head as well!”

10 Jesus answered, “Those who have had a bath need only to wash their feet; their whole body is clean. And you are clean, though not every one of you.” 11 For he knew who was going to betray him, and that was why he said not every one was clean.

12 When he had finished washing their feet, he put on his clothes and returned to his place. “Do you understand what I have done for you?” he asked them. 13 “You call me ‘Teacher’ and ‘Lord,’ and rightly so, for that is what I am. 14 Now that I, your Lord and Teacher, have washed your feet, you also should wash one another’s feet. 15 I have set you an example that you should do as I have done for you. 16 Very truly I tell you, no servant is greater than his master, nor is a messenger greater than the one who sent him. 17 Now that you know these things, you will be blessed if you do them.

But still, until you go through it, it is hard to explain how powerful an experience it can be.

After the foot washing, we had our Church Time. As always, it was emotional as everybody had unpacked the experiences from the trip. It ended perfectly. Jordan told everybody what this trip had meant to him in his life. After he spoke, we prayed and ended the night with a group hug with Jordan in the middle.

Kolbe convinced another adult on the trip to put together a PowerPoint with the lyrics to CONVOY and COUNTRY ROADS so that they could project them on the wall so when they serenaded the girls, they would actually know the words.

I don’t have video of this because I joined the Vidor Boys Choir on that night. It is rare that you get to see me fire up the golden pipes, too bad you can’t see it.

*With apologies to some people’s definition of family.
**See above.