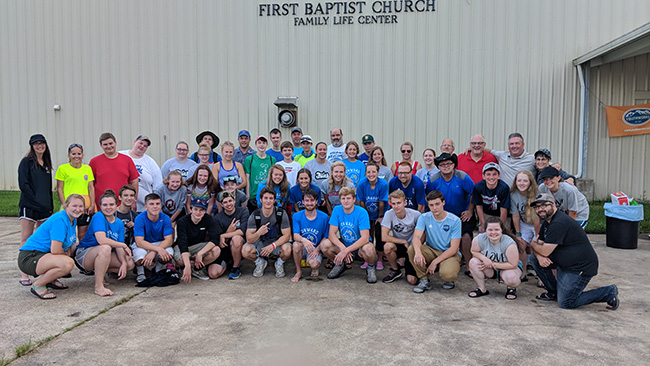 Friday morning everybody works on cleaning the building. Then you have a quick breakfast (usually this is a packed breakfast), everybody says goodbye and then you hit the road for the long, long, long trip back to the Cyclone State.

After cleaning the building, the kids got to put a pie in the face of each of the YouthWorks employees as a reward for buying so many shirts.

My day in pictures:

Jaxon packed up and ready for the road!

Our toilets for the last 18 hours. Megan got one of the honors.

Pie in the face!

This was Talia. I think she was literally in pain.

Ashley was next. She was the Site Director.

Our super caring kids did lead blinded Talia to the water.

Before we headed back we stopped by the Texans’ practice field. Megan’s “hot” older brother is the turf manager for the Texans.

He oversees their 3 grass practice fields.

He also see the turf on their indoor practice field.

The guy is like 26 and he already has his dream job. Thanks to a degree from Iowa State University.

Group photo on the Texans logo.

I was shocked to see that the Astrodome is still standing. They are turning it into a parking garage.

Inside NRG Stadium. He is also in charge of the turf in the stadium.

We also got a tour of the stadium where Houston’s professional soccer teams play.

Also managed by somebody from Boone County. This time from Ogden. Also an Iowa State graduate. Seeing a trend?

Most the tour was of the concourse, we weren’t able to go down onto the field because the Houston Dash had a game that night.

Celebrating in the pool at the hotel in Tulsa. (Photo cred: Tiffany)

Most of the day. After we left Houston, most of the rest of the day was spent on the road with one mission. To get to the hotel in Tulsa before the pool closed at 11. We ate lunch at a Chick-Fil-A. Then we drove with only bathroom stops all the way to Tulsa. We got there a little before 10.

Andy was a swell guy and ordered up a bunch of pizzas from a local pizza place in Tulsa. I think the place was called Mazzio’s. It was delicious.

The kids got to swim in the pool until almost midnight, before the hotel employees realized they were still in there and kicked them out.

For the first time in over a week, I got to sleep in a bed. It was glorious! It was everything I remembered that sleeping could be!