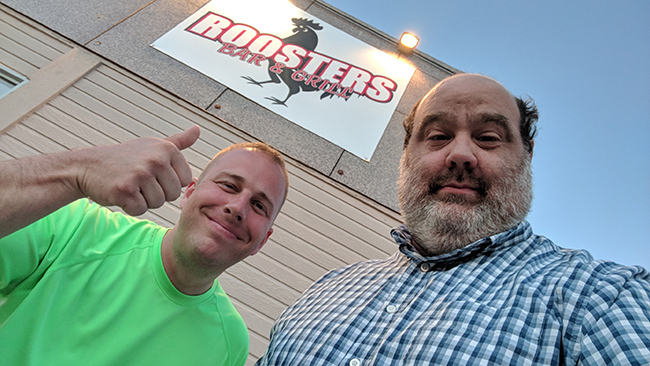 Then in early 2018 rumors began to percolate that the building that The Legal Limit occupied was going to house a new restaurant. The first people that bought it, backed out and never opened their doors.

Then another person bought it and opened it back up under the name Roosters.

I was excited. As long as they had a great tenderloin.

The first Saturday we tried Roosters, things were promising. Our old The Legal Limit waitress was there. The food was good and the service was good.

So we came back the next Saturday. Our old waitress was gone. She was replaced with what I’m guessing was a high school girl (I’m really bad at telling the ages of anybody under the age of let’s say 25) and this had to be either her first job or at least her first food service job. Anything you wanted, you had to ask her for 3 times. This is not an exaggeration. It was like on the 3rd time hearing something, something magically clicked and she would actually bring you the drinks you order 15 minutes ago. It just wasn’t drinks though. We had to ask 3 times for silverware. 3 times for sugar substitute for the coffee. 3 times for syrup for the pancakes.

I am pretty forgiving of bad service. If it occasional. Or if it a new restaurant just starting up. Or if there is some contrition.

So, we went back there again the following Saturday. It was the exact same story. The food was good enough. The service was still atrocious. Every time you needed something, (LIKE SILVERWARE), you had to ask 3 times. What made it frustrating was that it was an entirely different waitress. The entire staff (minus our old waitress) apparently is given zero training. Just a figurative ((hopefully) slap on the rump and told to get out there and do some waitressin’. Doesn’t matter if they have no clue what to do. Even the basics, like people need silverware to eat things like biscuits and gravy.

My Mom and I have returned to breakfasting at The Whistle Stop Cafe and haven’t looked back. A place where pretty much every Saturday the owner stops by our table and asks how everything was.

So it was under this shadow that Scottie D. and I decided to give them a try. Even before having atrocious service in back to back weeks I offered to Scottie D. that maybe we should give them 2 months before bringing our extremely high standards to their doorstep.

Scottie D. (who is still in the management field) offered, “They should be firing on all cylinders as soon as they open their doors for business.”

While I agree with Scottie D. in principle, I also live in the real world, where I know that just isn’t the case for most businesses. Especially restaurants/bars.

We picked a Thursday night and agreed to meet up there at about 7:30. I got there a little before 7:30. I sat down and ordered a Pepsi and their chicken wings for an appetizer. They talk up their chicken wings on their Facebook page. The place was virtually empty. There was a guy drinking at the bar. There were maybe a couple more people there.

Scottie D. was waiting to get done with Porter’s ball practice. Scottie D. brought Melissa, Austin, Porter, and a spare kid with them. They showed up about 8 PM. They arrived before the chicken wings.

Here are the pictures from the night: 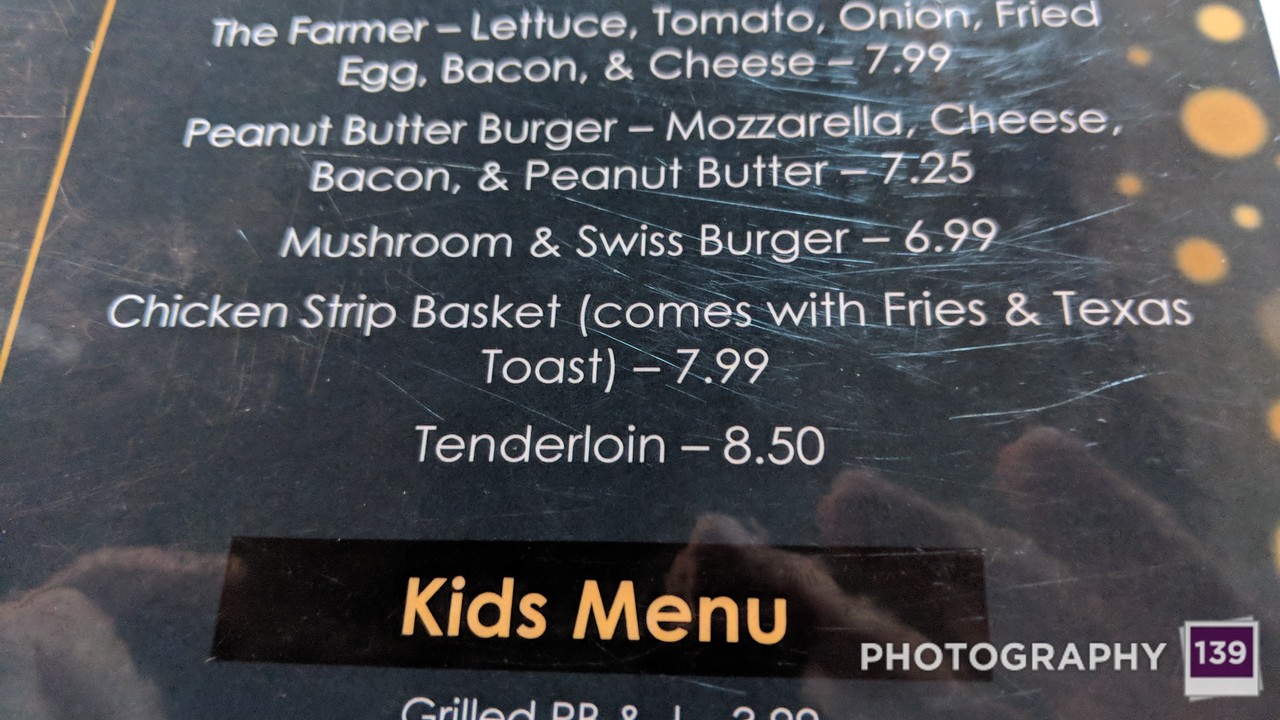 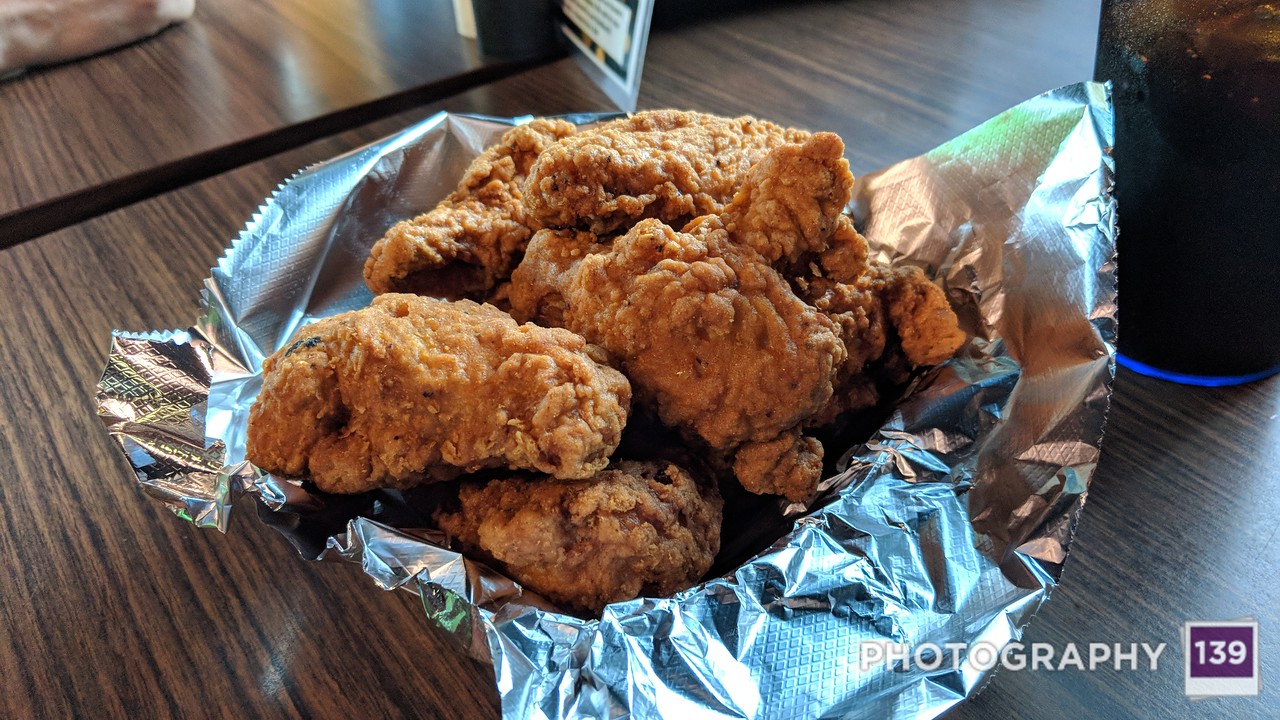 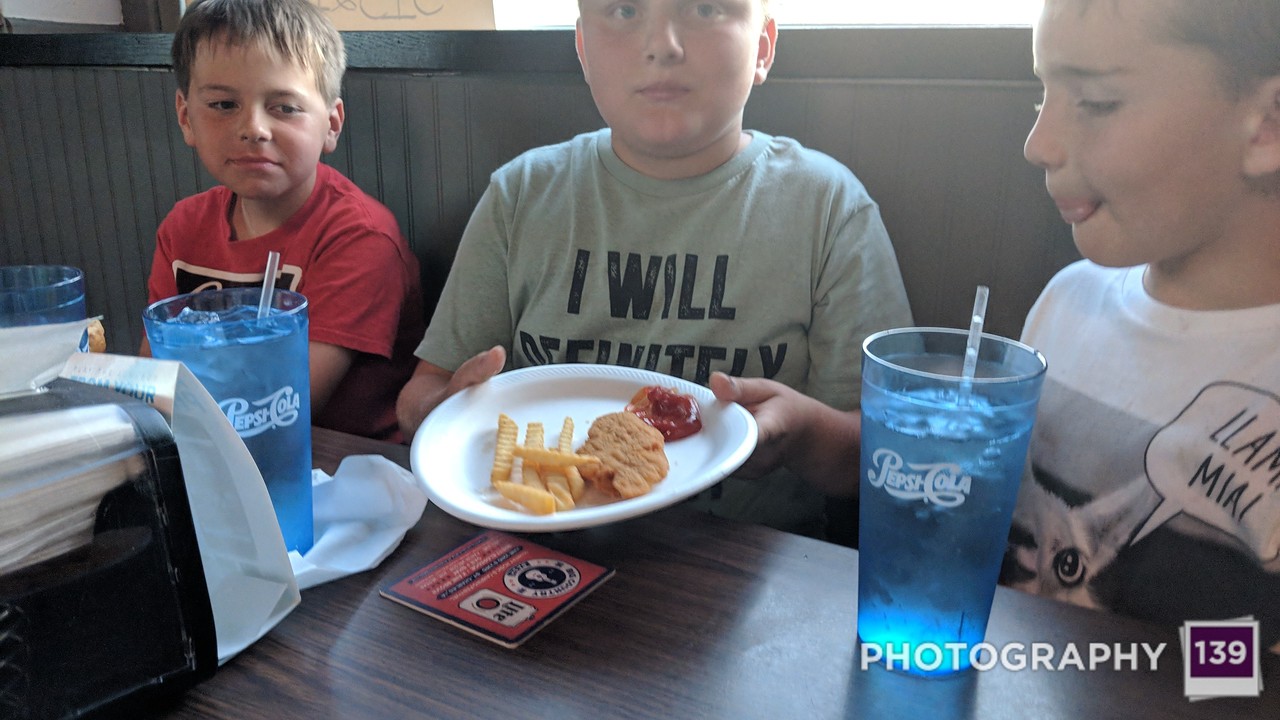 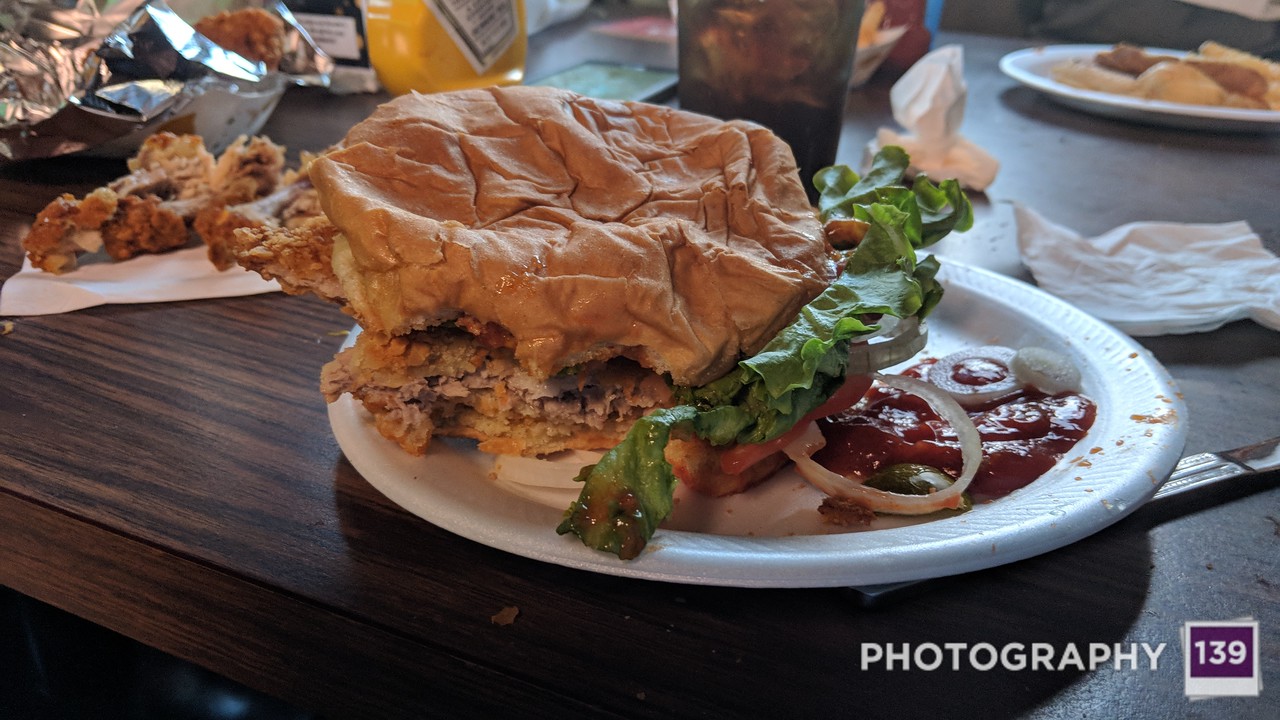 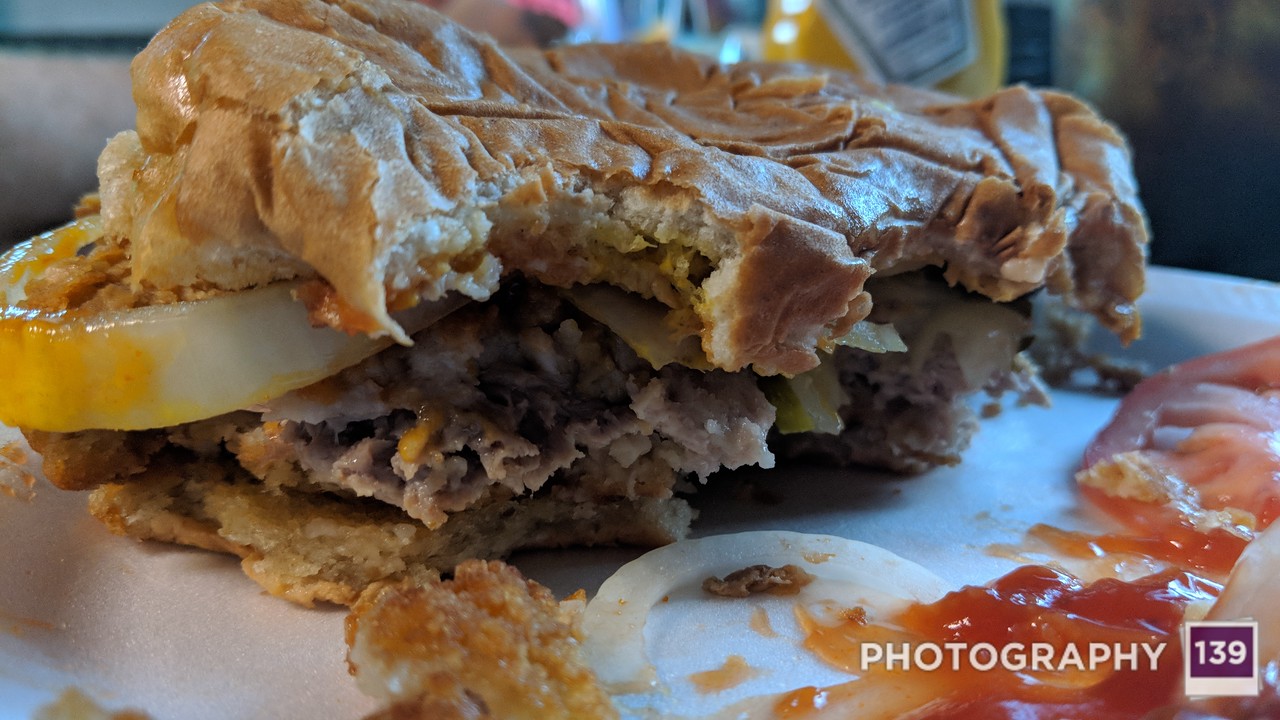 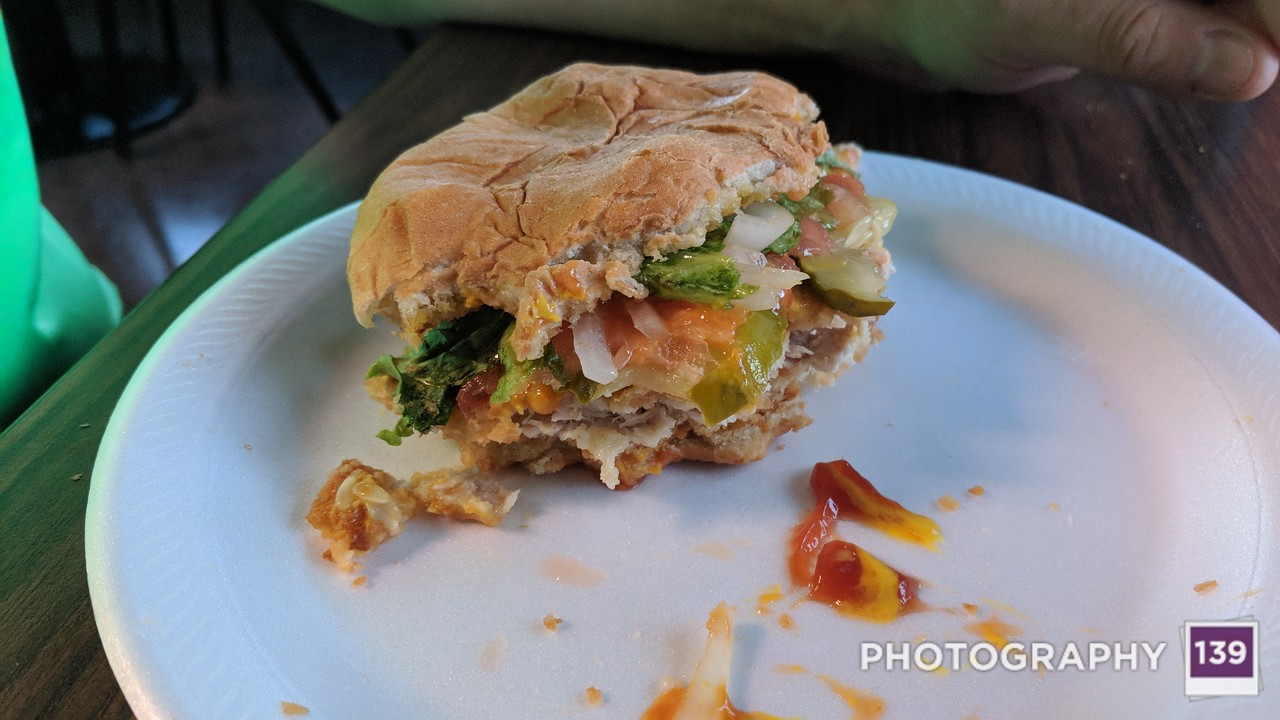 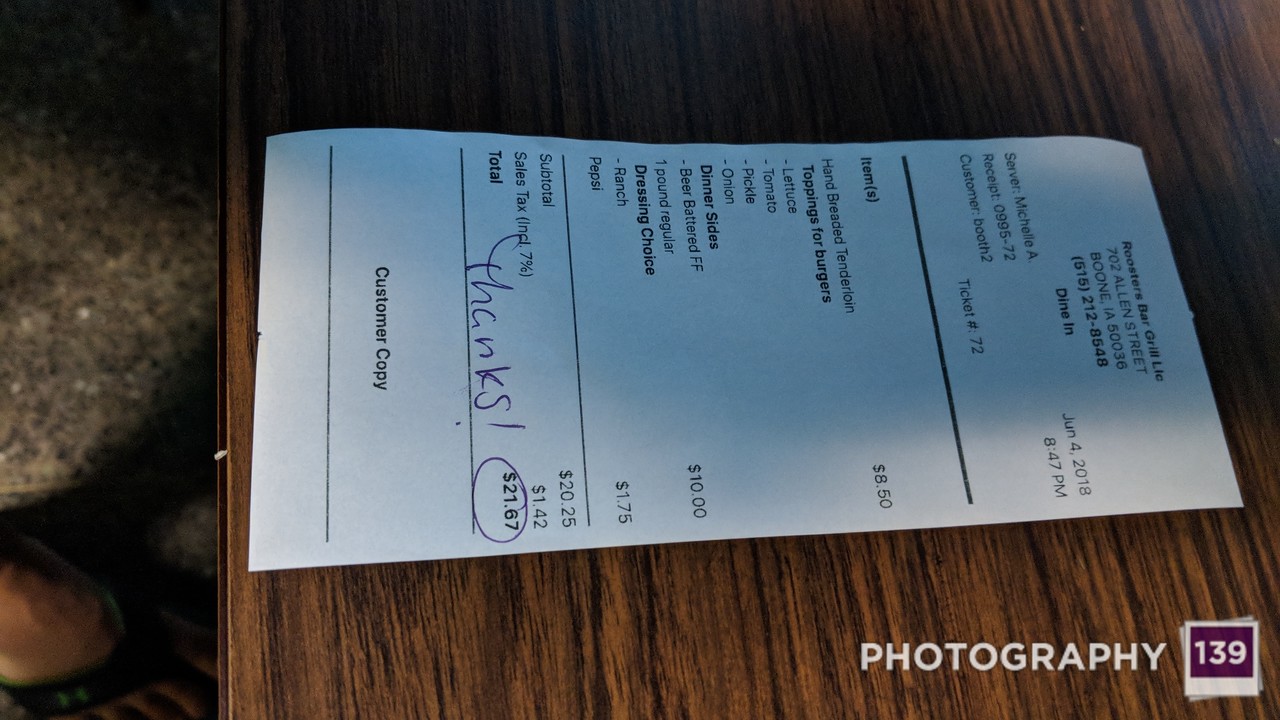 When we asked about the new owner, she pointed to the bar. The owner was sitting at the bar drinking. Not a good sign. What made it worse was every once in awhile our waitress would go over to the bar and have a shot with him.

Nowhere on the menu does it indicate that there are any dipping sauces for the chicken wings. Nor were any offered. But on the receipt it was marked with Ranch. Which I didn’t get, nor was I offered.

When Scottie D. went to the restroom he noted that nobody in the kitchen was wearing gloves. Also, there was nothing in the bathroom to wash your hands. Which makes the fact that they weren’t wearing gloves, worse.

Yet, the tenderloin was pretty good. Not 45 minute wait when there is nobody in the restaurant good, but pretty good.

We had our experience the first week of June. We haven’t been back. If the tenderloin was say Nick’s or Cole’s quality, I might be willing to wait 45 minutes. It isn’t.