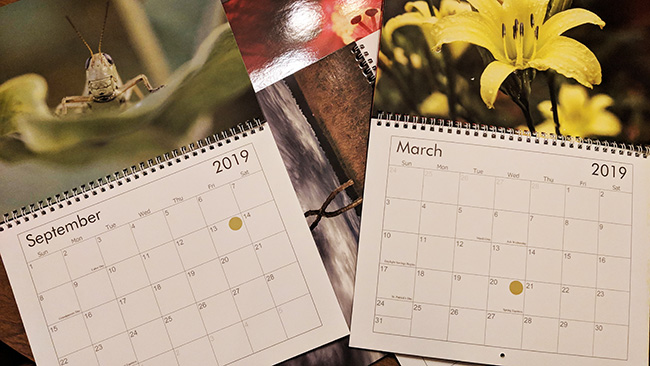 Yes Virginia, there was a Photography 139 Calendar this year. However, I didn’t sell them this year. I just made a small run and gave them out to a very few small group of select people.

Here are the pictures from the 2019 Photography 139 Calendar:

The front cover is a picture of William McAlpine peering through the hole in a brick. It was taken in the backyard of the Photography 139 Studio. It was taken for the FRAMED theme of THE WEEKLY PHOTO CHALLENGE.

This photo was entered into the 2018 Iowa State Fair Photography Salon. It was accepted for display.

The January image was taken on a very foggy Christmas Eve morning. It was taken facing northeast from the road in upper Ledges State Park.

This image was entered in the 2018 Iowa State Fair Photography Salon. It was selected for display.

The February image of a red hibiscus was taken in the Photography 139 Flower Garden in 2017.

Unfortunately, the hibiscus did not survive the winter and did not return to the Photography 139 Flower Garden in 2018.

The March image is of a lily is located in the Photography 139 Flower Garden. It is located in a designated lily patch near the birdbath.

While this macro photo might appear to be one image, it is actually the product of a technique called focus stacking. This image is actually 7 images with different focus ranges stacked one on top of the other.

This photo was nominated for the Pufferbilly Days Photo Contest, but it lost the popular vote and was not entered.

The April image was taken at The Grotto of the Redemption in West Bend, Iowa. It was taken on a road trip with my Office Buddy Joe Lynch. It was taken with the in-camera black & white HDR setting.

This image was taken for THE PHOTO JOURNAL PROJECT. The theme of the image was to go some place “touristy” and take a “non-touristy” picture.

The picture of Mary holding a crucified Jesus was selected for April to coincide with the celebration of Easter.

This image was entered in the Photoshop category of the Pufferbilly Days Photo Contest. It won 1st Place.

The May image is of the sculputre Skallagrim by Peter Lundberg. Skallagrim is located in the Franconia Sculpture Park near Shafer, Minnesota.

I took this photo on a trip there with Bethany, Dae Hee, and Nora.

The image is HDR toned and is used as the base image for a Small World image.

The June image was taken on Beale Street in Memphis, Tennessee. It was taken on the Liberty Bowl Road Trip I took with Russell Kennerly and Jesse Howard to watch the Iowa State Cyclones defeat the Memphis Tigers.

The image was originally taken in color and was transformed into black and white in post production.

The July image is of a hollyhock from the Photography 139 Studio Flowerbed. This pink hollyhock grew in the dedicated hollyhock patch along the north fenceline.

This macro image was taken while experimenting with a new set of extension tubes.

This image was nominated for the flower category for the Pufferbilly Days Photo Contest, but was not entered. 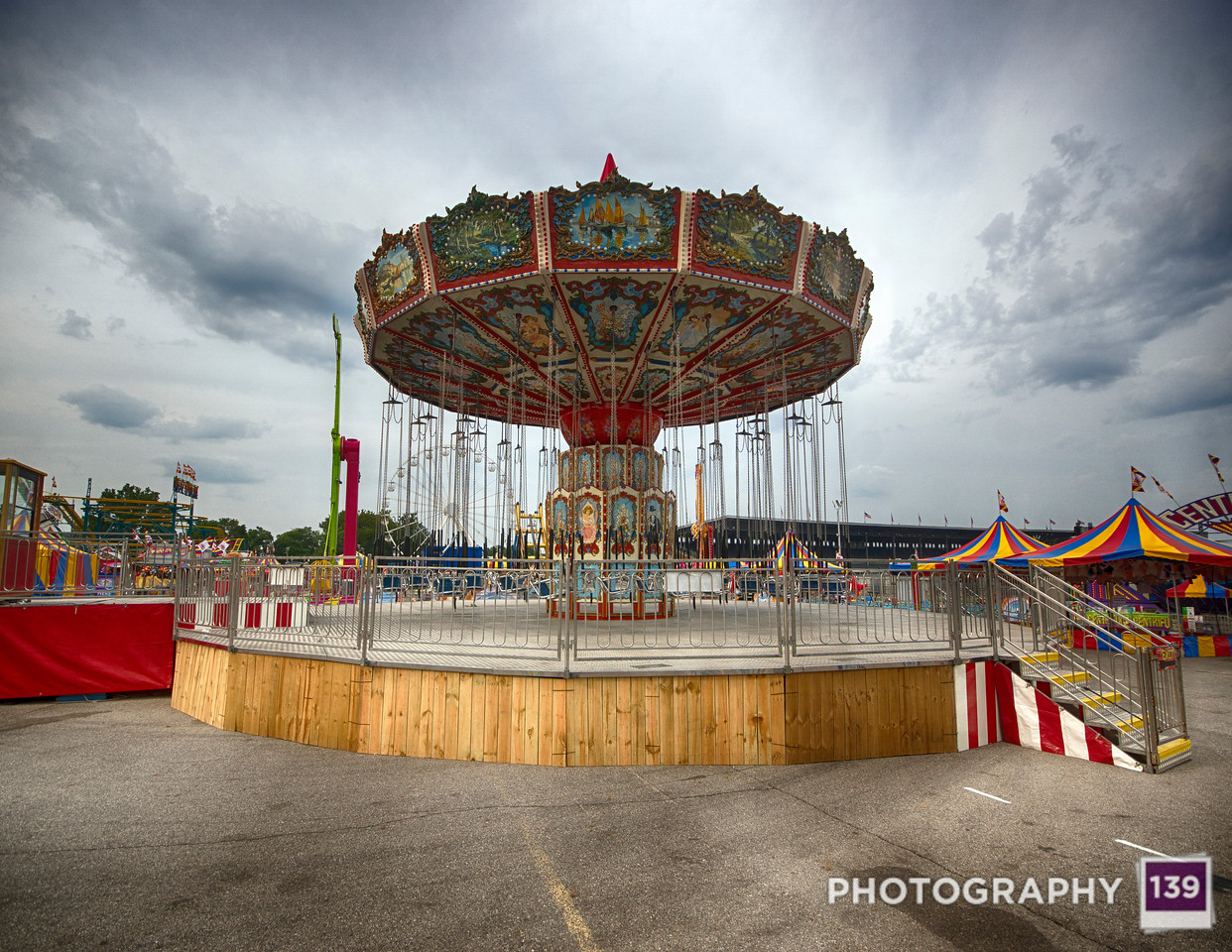 The August image was taken in the midway of the Iowa State Fair. It was taken for THE PHOTO JOURNAL PROJECT. The theme of the picture was to take a picture of something that is “nondescript during the day.”

The image was taken when I was able to sneak away during a break in the action of Baby Got Rack’s competitive barbecue competition.

The image was HDR toned in post-production.

The September image was taken of a grasshopper at Big Creek State Park near Polk City, Iowa. The image was taken for THE PHOTO JOURNAL PROJECT. The theme for this image was to create a playlist and listen to it while taking pictures. The playlist I selected was the BABY DRIVER SOUNDTRACK. I was listening to the song “Bongolia” by Incredible Bongo Band when I took this image.

The October image of a ram lounging was taken in Badlands National Park in South Dakota. The image I was taken on the way home on a road trip I took with my Mom to Mount Rushmore.

This image was voted to be entered in the Pufferbilly Days Photo Contest in the Nature Category.

The November image was taken at the Iowa State Fair in the Discovery Garden. It was originally taken in color and converted to black and white in post-production.

It was nominated for the Pufferbilly Days Photo Contest in the Nature Category, but it was not entered. 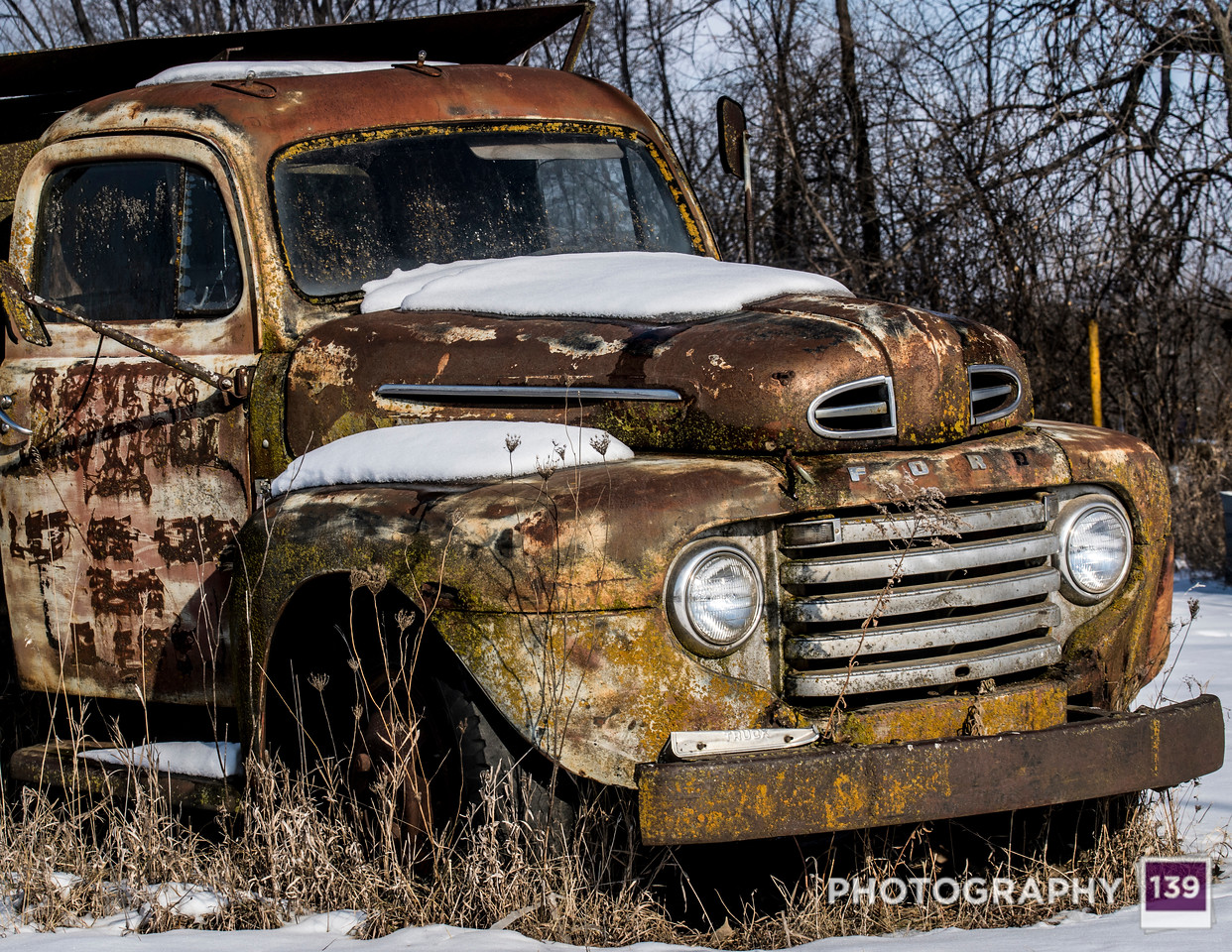 The December image of an abandoned dump truck was taken in Boone, Iowa near the south terminus of Division Street.

The image was color processed through the Color Efex Pro 4 plugin during post production.

The image was nominated for the Pufferbilly Days Photo Contest in the Hidden Treasures of Boone County category, but was not entered.

There are a few calendars to handout, but for the most part delivery has finished. Almost on time this year.