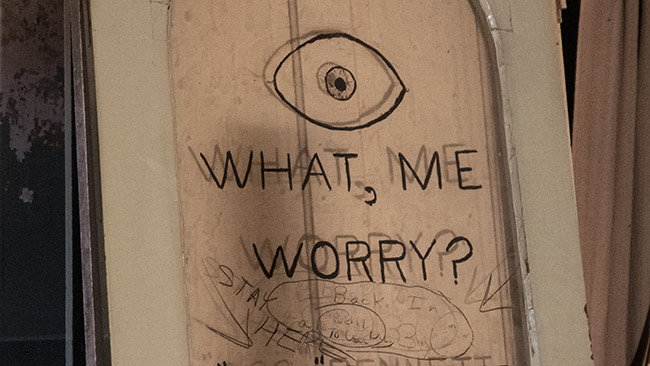 The journey to taking the picture for Page 68 of THE PHOTO JOURNAL PROJECT is one that came completely out of nowhere. I certainly didn’t see it coming. I don’t think anybody saw it coming.

It all started when I got home from Youth Group a couple weeks back and saw a bunch of text messages on my phone from Logan. It had been a fascinating night at Youth Group. Pastor Doug came and talked to the youth about the multi-million dollar public relations disaster for the United Methodist Church that was the Saint Louis Conference.

If you aren’t Methodist or don’t follow the news, the Saint Louis Conference was a conference where a bunch of Methodists got together to decide what to do about homosexuality. Just like Jesus wanted. People getting together in big meetings, with a ton of parliamentary rules, to discuss a topic he wouldn’t care about.

He’d be like, “You guys do that. I’m just going to be over here loving people. You might want to think about joining me.”

I have no doubt that Jesus would be throwing all sorts of shade at the modern church. Not just the Methodist Church, but all the pedo-church down the street and the church across town that makes divorcees second class members and the church out in the country that spends a fortune on having a beautiful building but turns it back on the suffering widow and the starving child.

Borrowing from Carlos A. Rodriguez:

Here’s what Jesus did NOT say:

Welcome the stranger, if he has money.
Feed the hungry, who earned the food.
Love your neighbor, when it’s good for the economy.
Give water to the thirsty, once they pay their dues.

The only clear line I draw these days is this: when my religion tries to come between me and m neighbor, I will choose my neighbor… Jesus never commanded me to love my religion.

Remember, 100% of the people you hate were created in God’s image.

There were basically two plans on the table. (That isn’t 100% accurate, but you don’t want to be here all day do you?) One plan was called the Traditional Plan and it was basically, “Hey we’re going to take a couple verses in Leviticus out of context and then forget about literally almost everything Jesus said and pretty much make that our thing. You cool with that? If you don’t agree and step out of line, we’re going to hit you with a bunch of punishments.”

This was put forward by the super conservative churches that our drawn to Christianity because they think it is a way they get to judge other people. Which I get, judging other people makes you feel really good about yourself without having to earn that feeling. It is almost like found money.

My understanding is that this super bigoted plan was put forth by these conservative churches with the intention that it would never pass. Then they could cry foul, take their ball and go home. Their ball being that they could break off from the rest of the Methodists and have their Klan lite meetings without anybody bothering them.

The other plan was the One Church Plan. It basically said, “Hey guys, we aren’t all going to agree on this one issue, but this whole Jesus thing is a whole lot bigger than one issue. So let’s let each church and Pastor do their own thing. If officiating gay weddings is your bag, we dig it, go do it. If it isn’t, that’s like super judgmental, but we won’t force it on you.”

Well, the Traditional Plan passed. So yeah. Sucks to be a Methodist.

But the news isn’t all bad. The Traditional Plan is super unconstitutional (because of a bunch of super boring technical financial issues) and has been sent to the Methodist Judicial Council where it will crash to the ground faster than a Boeing 737 Max 8.

Now the youths weren’t being super talkative. So I had all the people in the room that wear glasses stand on one side of the room and told them for the purpose of this exercise, what would they do if I told them that they were only allowed to come back to Youth Group if they gave up their glasses wearing lifestyle.

Many of them threw their glasses off. They said, they would be willing to cover up who they were to keep coming to Youth Group and that made sad. I dare say melancholy.

Now this exercise was I’m sure was subconsciously based on the C.S. Lewis quote:

“I believe in Christ, like I believe in the sun – not because I see it, but by it I can see everything else.”

But then something that will go on the list of my favorite things that I have ever seen with the youth group happened when two of the youths told me that what they would do if they were kicked out of Youth Group for living a practicing eye glass wearing lifestyle. They said that they would build a giant pair of glasses and put it on the church building.

They were being probably about 40% facetious and another 40% punk, but I thought: “My God! These kids have created the perfect metaphor for the situation we are in.”

Much of the rest of the night’s conversation surrounded the gender fluid and transsexual kids that they knew and ways that they can be their allies in what is probably the worst roughest part of life. High School.

The conversation lasted well past the time we are supposed to close up shop. I feel that is was a successful night.

When I got home it was then that I saw all the text messages from Logan. They were pictures of old doors. One had my Dad’s name and my Uncle David’s name on it. The other had artwork drawn on it, by my Dad. I had never seen these doors. I didn’t know they existed.

My Dad passed away two days before Christmas when I was nine years old. My Uncle David passed away before I was born. This artwork had to date back to the early 1960s.

Logan is the someday to be Pulitzer Prize winning editor of the Boone News Republican. For reasons that aren’t clear, but also aren’t important, his job landed him at Paradox. I think the best way to describe Paradox is that it is an art and antique and craft store. Yes, Boone has a ton of them. But Paradox is different. The kind of things they sell in there are strange. Maybe even a little twisted. Basically, not the type of thing you’d expect to see in Boone.

Somehow Logan got a tour of the entire building that Paradox owns. It used to be Ensley Photography Studio, but right now it is being rehabbed into something entirely different.

On the second floor of the building there is an old vaudeville stage. In this area, there is a door. On the window are the names Gerald D. Bennett and John D. Bennett. In a pile of doors off to the side is a door that is the work of Doc Bennett.

I told Logan that I needed to see these doors and to see if they would sell one of them to me. Logan went back and setup an appointment to get a tour again on that Saturday.

It was on this tour that I took the picture for Page 68 of the PHOTO JOURNAL PROJECT: 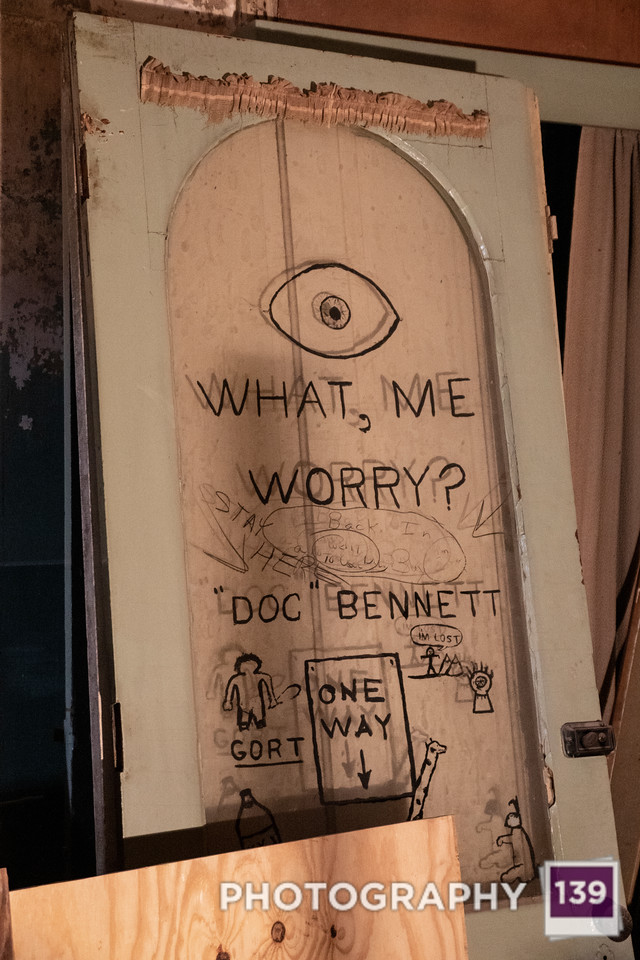 Now the actual purpose of Page 68 in THE PHOTO JOURNAL PROJECT isn’t to find a window with artwork on it. It is actually to put a subject next to a window and take their picture lit by the light coming through the window.

However, when the wording is “Let a window do all the talking”, you better believe that I haven’t had a window talk to me like that window talked to me.

Here are a few other pictures I took of artwork, some of it kind of creepy, that I absolutely can’t believe are still there 60 years later: 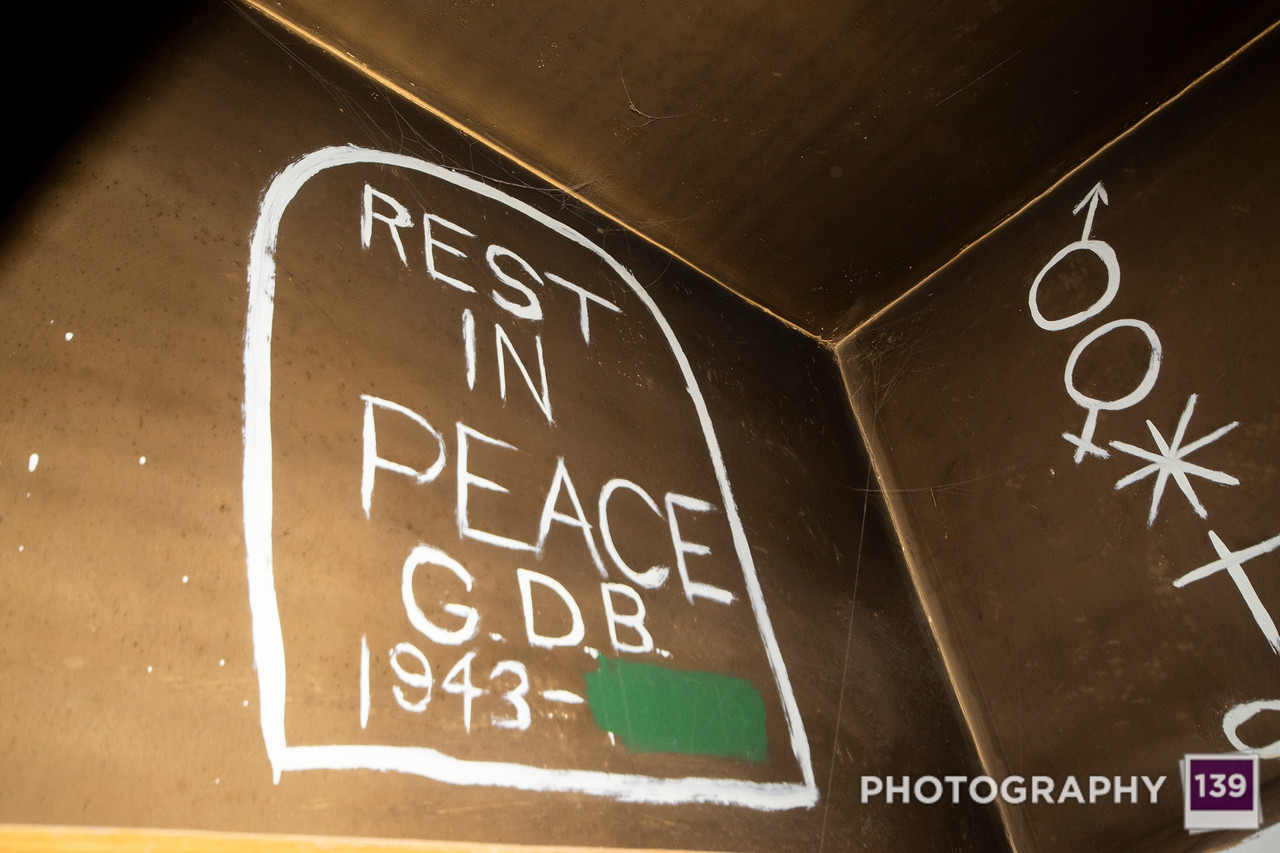 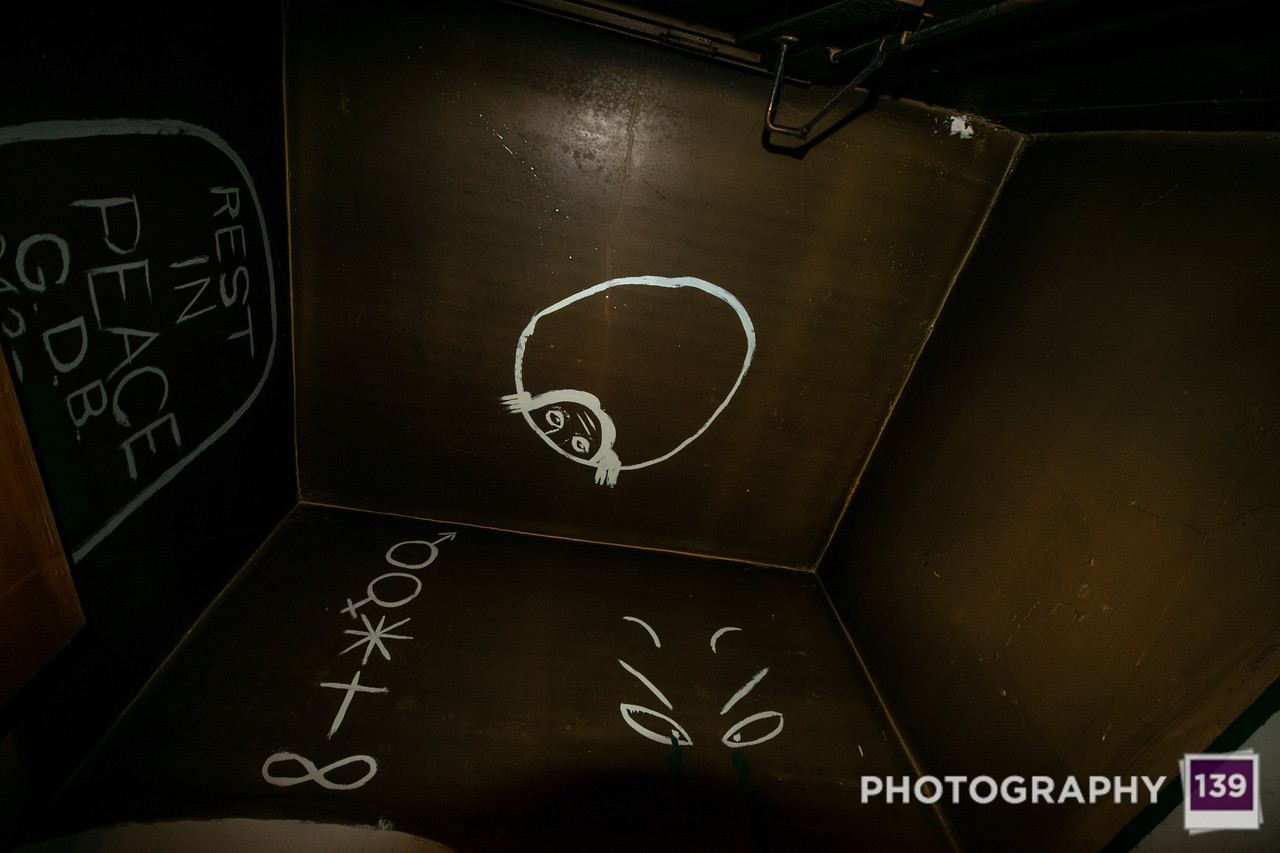 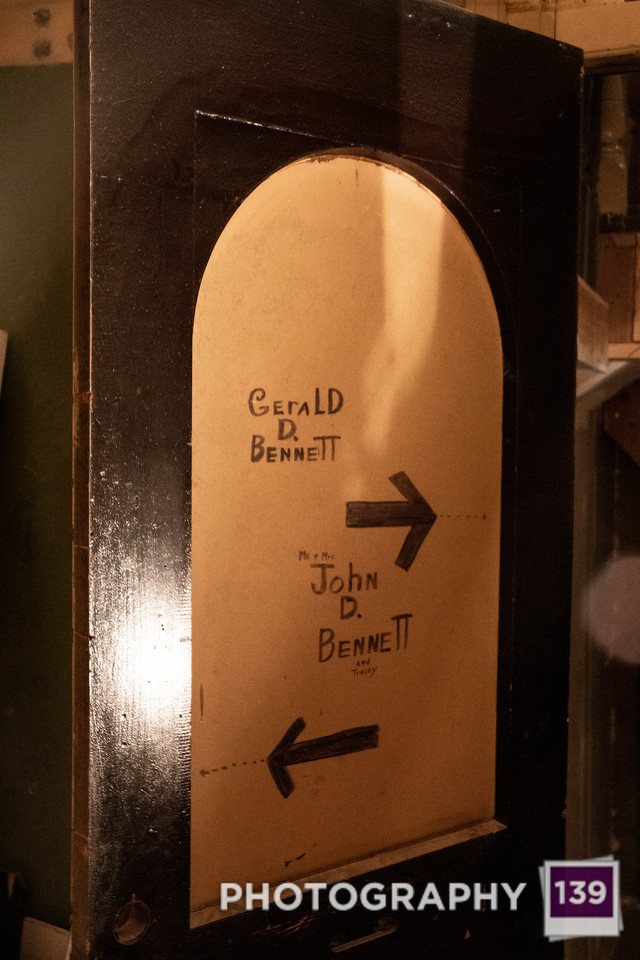 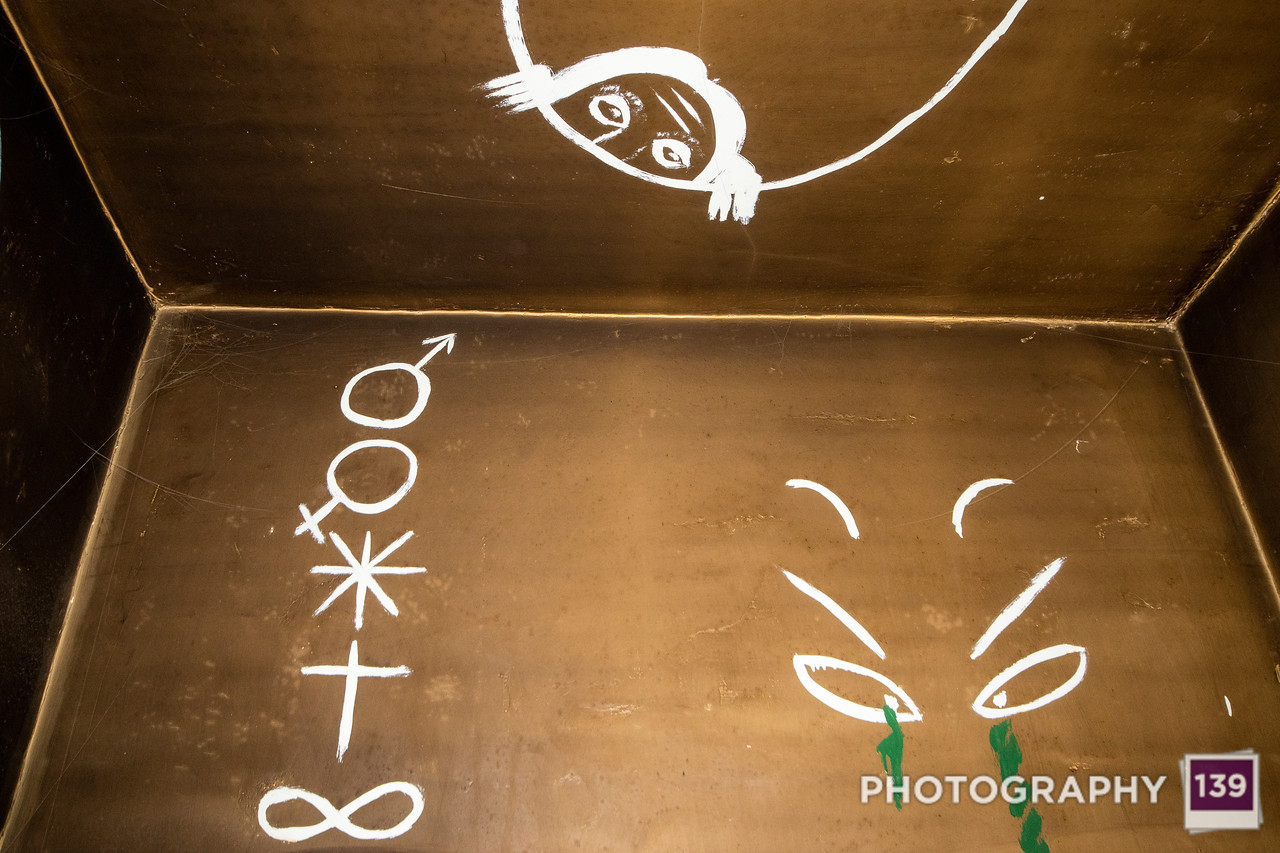 After the tour I did inquire about buying the door from the husband and wife team that owns Paradox. They said, that they would have to think about it, but they thought that they would. I gave them one of my super fancy Photography 139 business cards so that they could contact me. I haven’t heard from them yet, so I may have to go back in and inquire again.

The next time we check into the PHOTO JOURNAL PROJECT, we will look at Page 90.

This is your reminder that this week’s theme for the WEEKLY PHOTO CHALLENGE is FAVORITE COLOR: 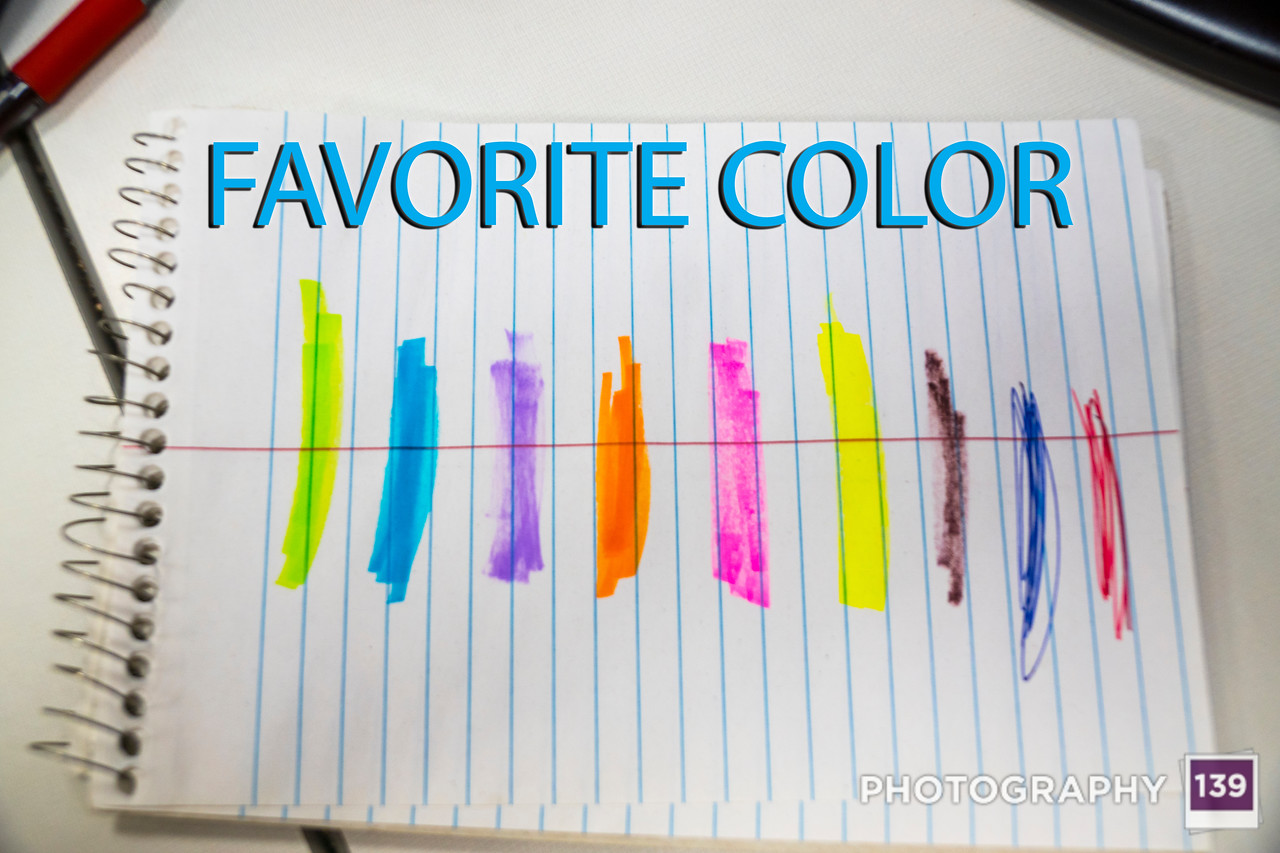