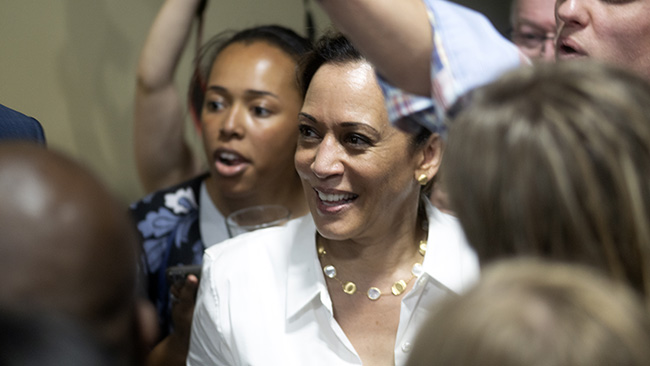 On July 3 I went down to Water Works Park in Des Moines with Jesse and to meet Russell to see Kamala Harris speak. It was absolutely pouring down rain and Water Works is an outdoor venue.

The Kamala Harris campaign was nice enough to give us ponchos as we waiting in the downpour. After about 10 minutes they came down the line and announced that the event was moved to Confluence Brewing.

This sucked because I was excited to see Kamala Harris. She is the first candidate that I have see that has a legitimate shot of being the next President of the United States. You could make a case for Bernie, but considering his national profile, if he was going to win the nomination his poll numbers would be much better right now. Plus he seems to be fighting for the same voters as Elizabeth Warren and as she surges he becomes more of an afterthought.

I can say that Confluence Brewing is a better venue than the Livery Deli. The lighting isn’t great, but it is better than at the Livery Deli. One thing that is hard to get past is the odor. It is a brewery, so it smells somewhat like rotting hops. Even worse when the person standing next to you is drinking what has to be the world’s strongest smelling beer. Puke.

However, since it was pouring down rain, this was better than nothing.

If you don’t know who Kamala Harris is, here is a little bit about her from her Wiki:

Kamala Devi Harris (/ˈkɑːmələ/ KAH-mə-lə;[1] born October 20, 1964) is an American lawyer and politician who has served as the junior United States Senator from California since 2017. A member of the Democratic Party, she previously served as the 27th District Attorney of San Francisco from 2004 to 2011, then as the 32nd Attorney General of California from 2011 to 2017. On January 21, 2019, she officially announced her campaign to run for the Democratic nomination for President of the United States in the 2020 United States presidential election.

Harris won the election as California’s Attorney General in 2010 and was reelected in 2014 by a wide margin. On November 8, 2016, she defeated Loretta Sanchez in the 2016 Senate election to succeed outgoing Senator Barbara Boxer, becoming California’s third female U.S. Senator, and the first of Jamaican or Indian ancestry.[2] Since becoming a Senator, she has supported single-payer healthcare, federal descheduling of cannabis, municipal protection for undocumented immigrants, the DREAM Act, and lowering the tax burden for the working and middle classes while raising taxes on corporations and the wealthiest one percent of Americans.

Kamala recently surged in the polls after her performance in the first Democrat Debate. I didn’t get to watch either debate because they happened while I was on the mission trip, but that is the analysis that I digested afterwards.

Here is an example of one of her positions from her campaign website:

OUR AMERICA
QUALITY, AFFORDABLE HEALTH CARE FOR ALL
Affordable health care should be a right, not a privilege. But today in America, the costs of health insurance, surprise bills, and prescription drugs are straining budgets and bankrupting families. Health care simply costs too much and it’s time to take on the powerful special interests that want to continue to put profit over people.

When Kamala’s mother was diagnosed with cancer, it was one of the worst days of her life. But Kamala was so grateful that her mother had Medicare. She believes we must guarantee Medicare-for-All.

Medicare for All will eliminate premiums and out-of-pocket costs. It will guarantee comprehensive care including dental and vision, and ensure Americans are not denied services or doctor choice. It won’t leave anyone behind, including the 130 million Americans with pre-existing conditions and 61 million Americans with disabilities. It will save money by taking profit out of America’s health care system and finally make affordable, universal coverage a reality.

Affordable health care also means lowering the cost of prescription drugs by taking on pharmaceutical manufacturers and private insurance companies. That’s what Kamala has done throughout her career. As Attorney General, she won a more than $320 million settlement from insurance companies that defrauded elderly Californians and people with disabilities. As president, Kamala will continue the fight. She’ll prosecute opioid makers profiting from the health crisis they’ve helped cause, allow Medicare to negotiate for cheaper prescription prices, and shut the revolving door between pharmaceutical companies and our government.

Kamala also believes health care will never be a universal right unless we fight back against the constant attacks on women’s health care. That’s why, as Attorney General, Kamala led a coalition of 16 states to urge the Supreme Court to protect women’s access to contraceptive coverage under the Affordable Care Act, and, as Senator, fought back against President Trump’s attempts to repeal the law. As president, Kamala will nominate judges who know Roe v. Wade is the law of the land, protect Planned Parenthood from Republican attempts to defund essential health services, and address racial disparities in maternal health care. Reproductive rights are protected by the Constitution and Kamala will keep fighting until those rights are protected and guaranteed in every state. 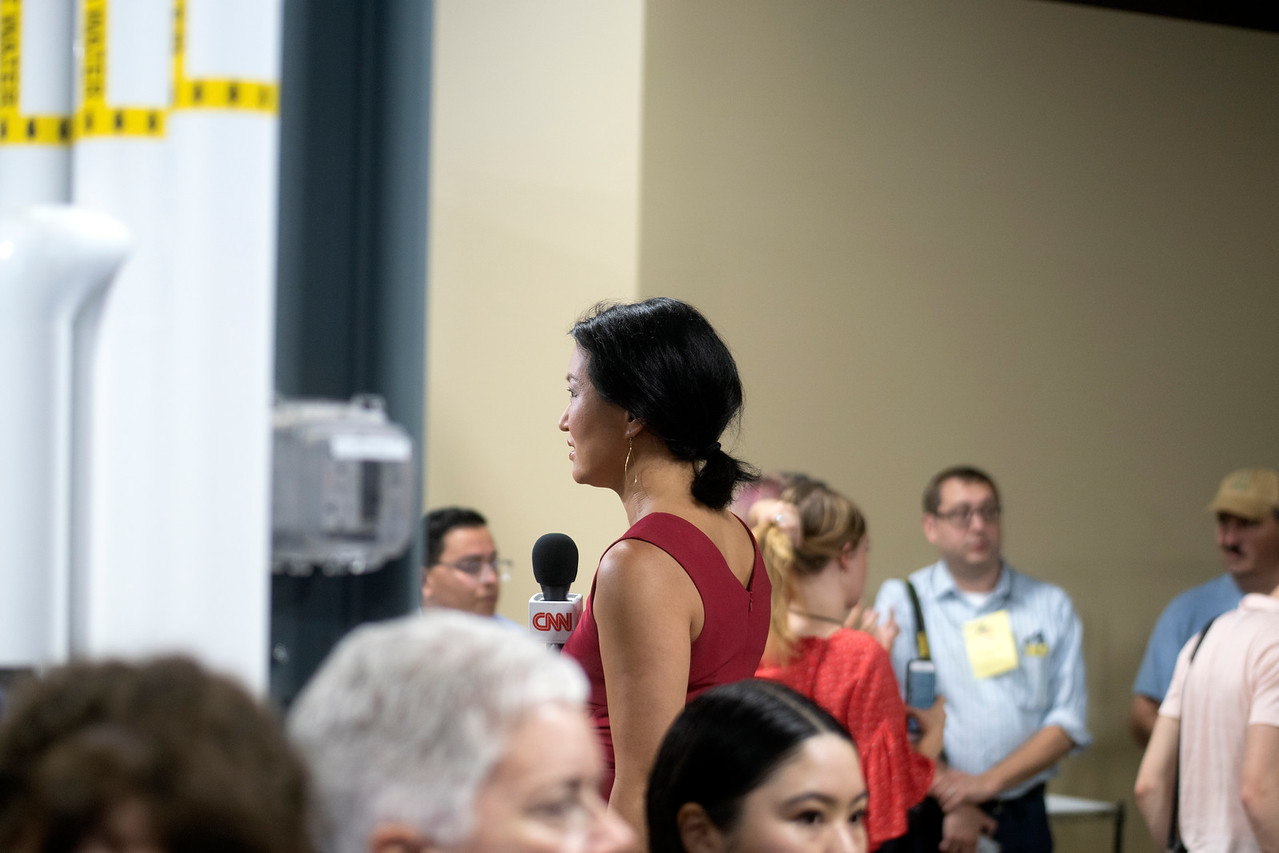 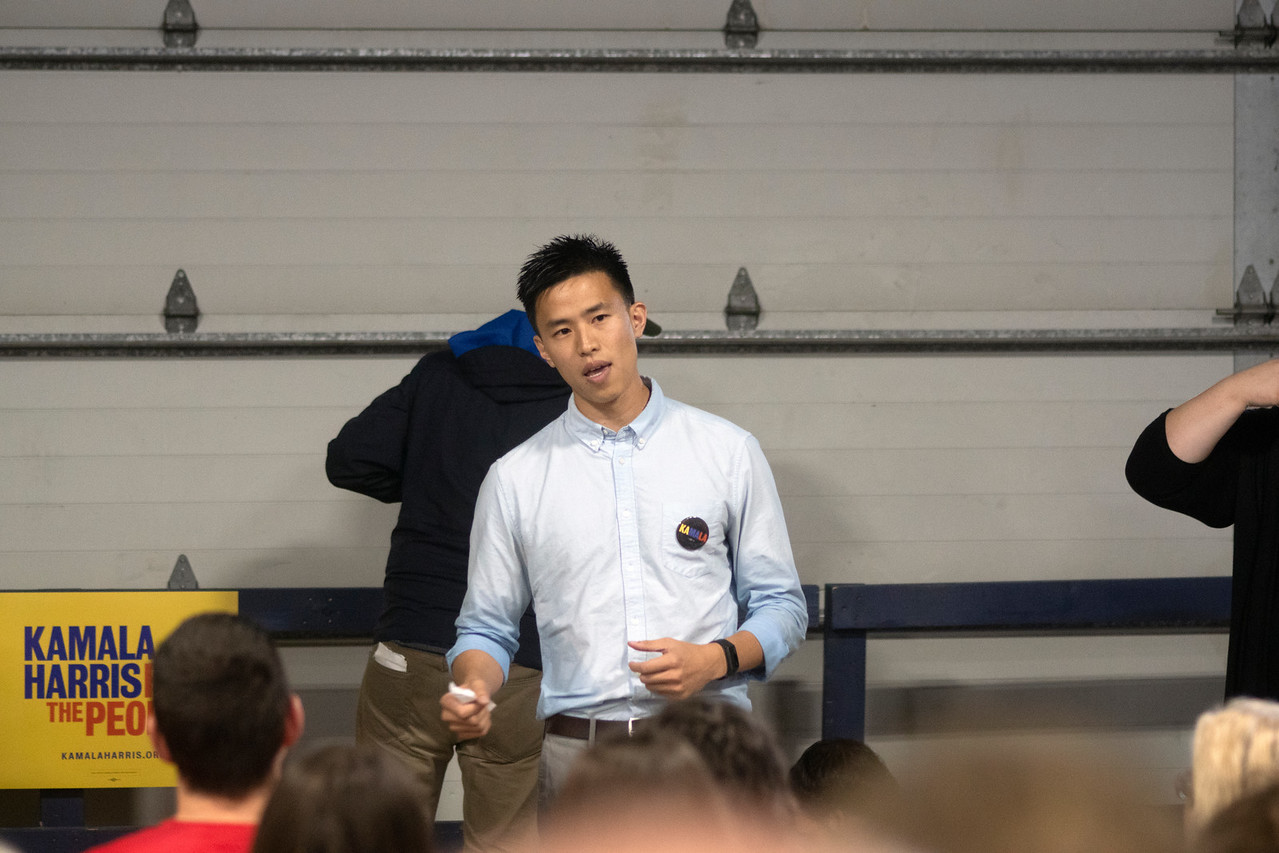 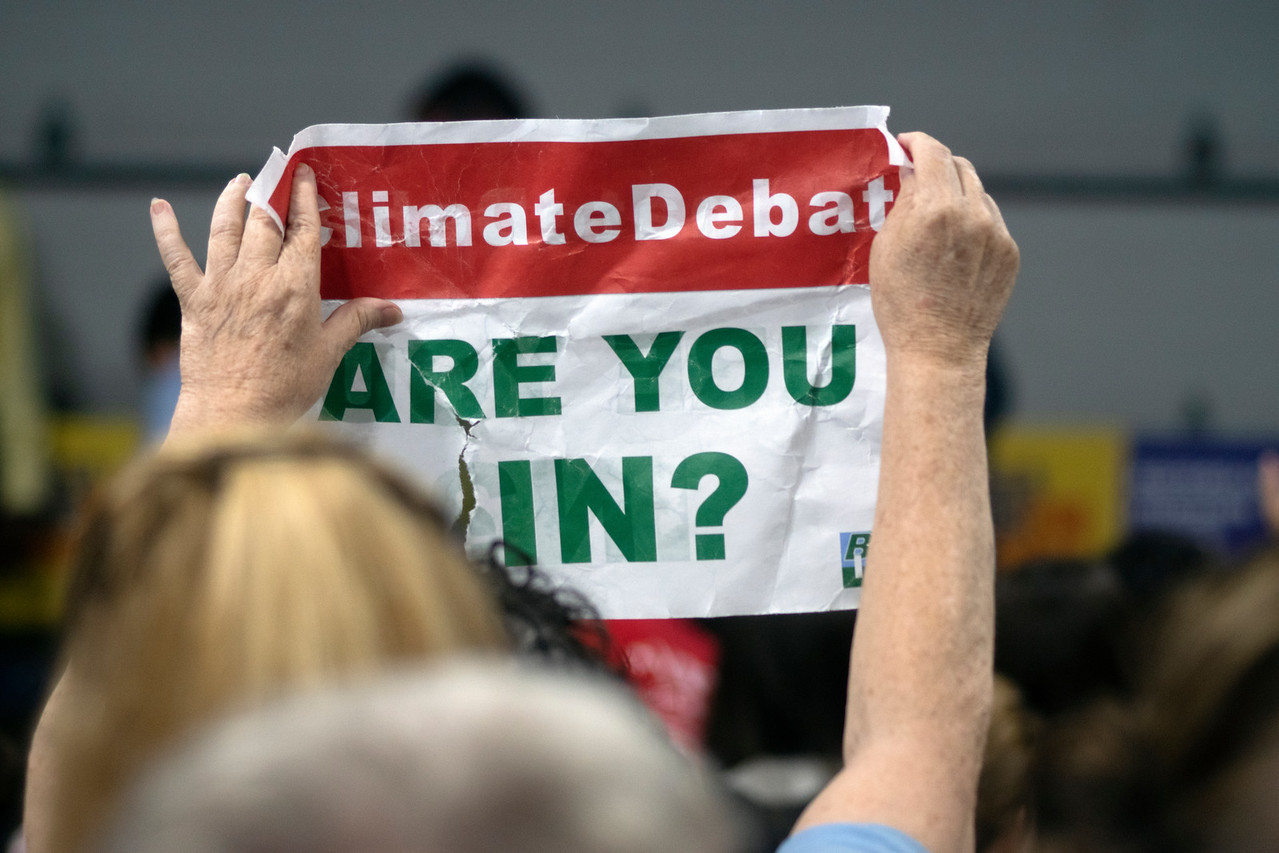 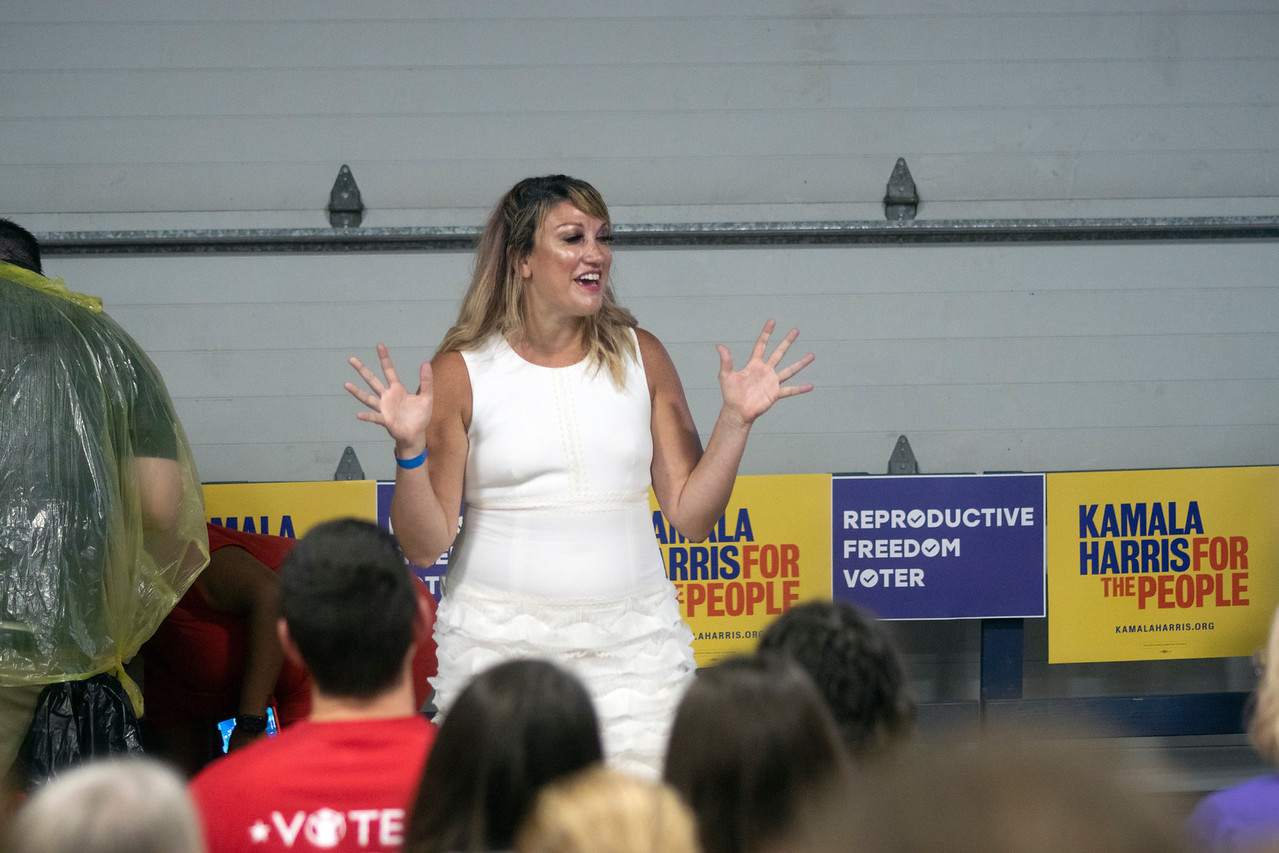 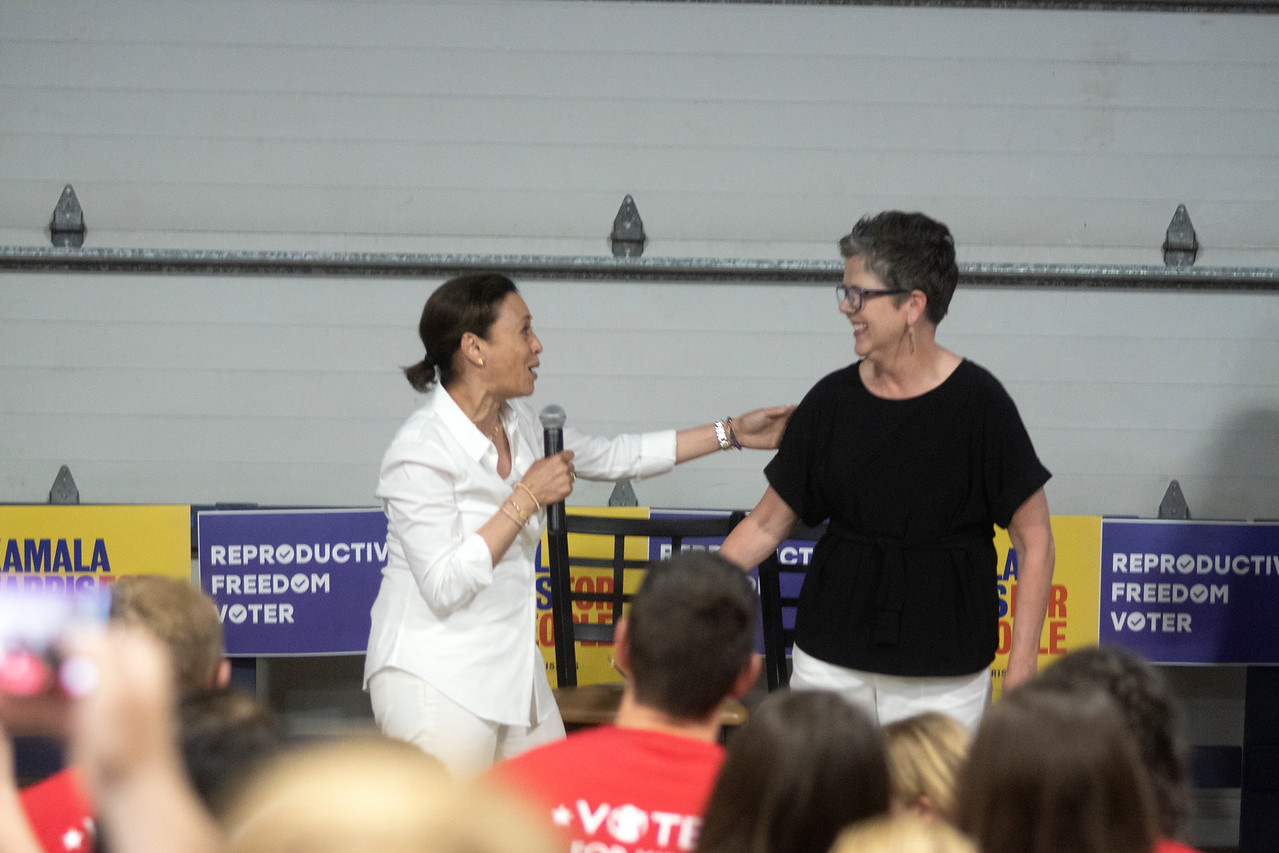 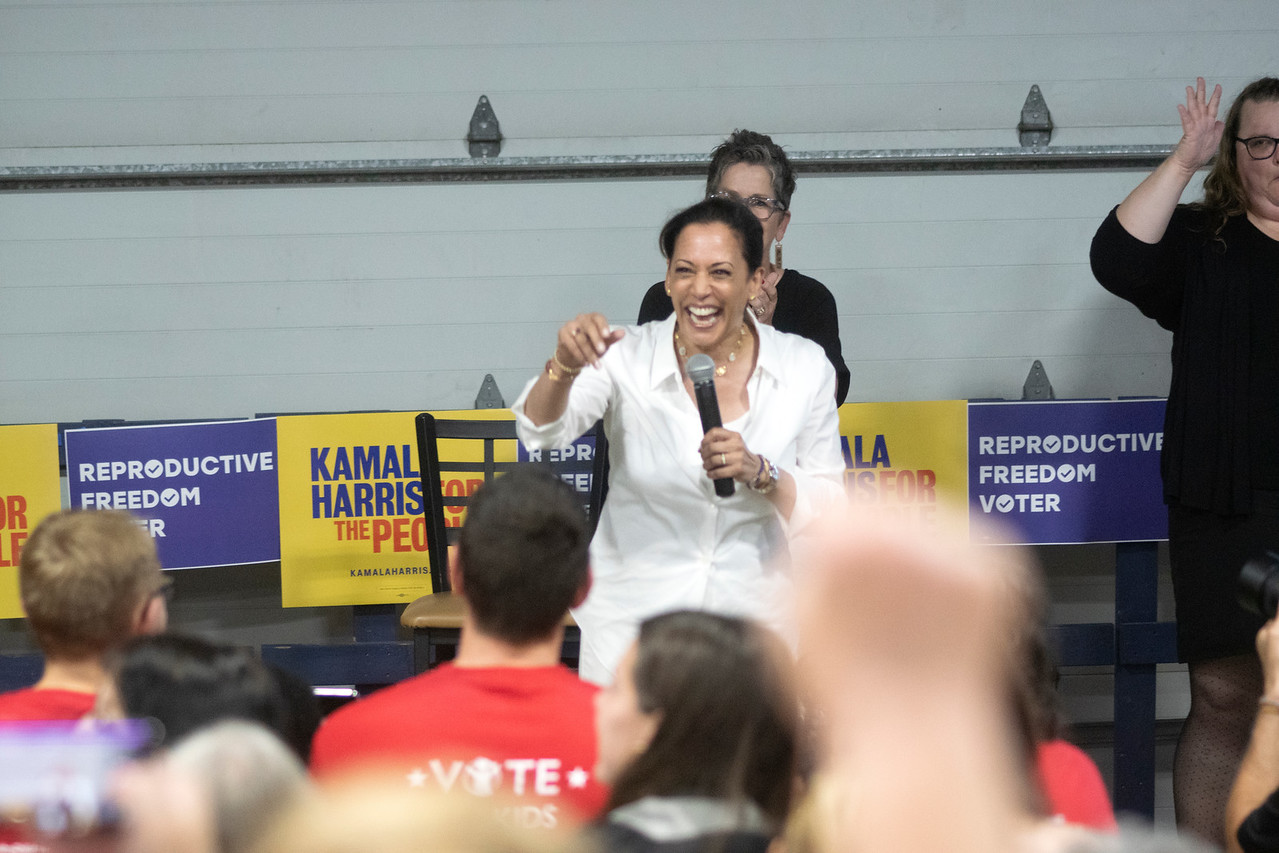 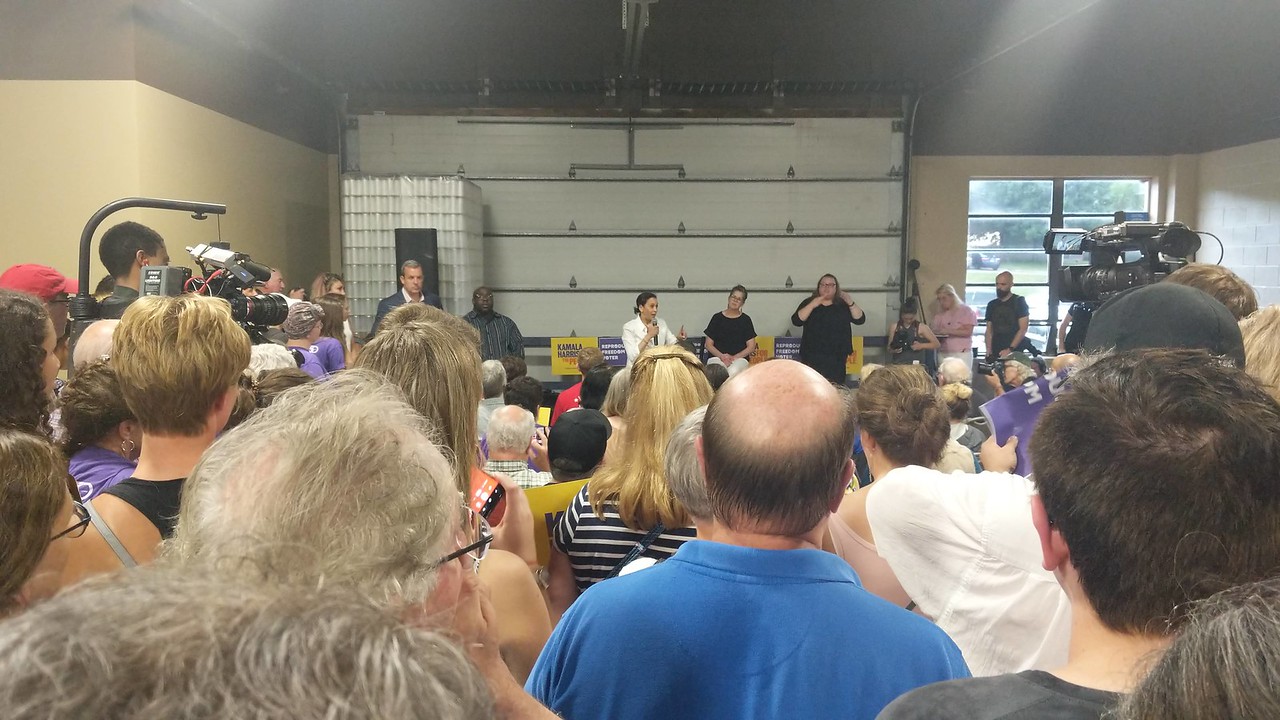 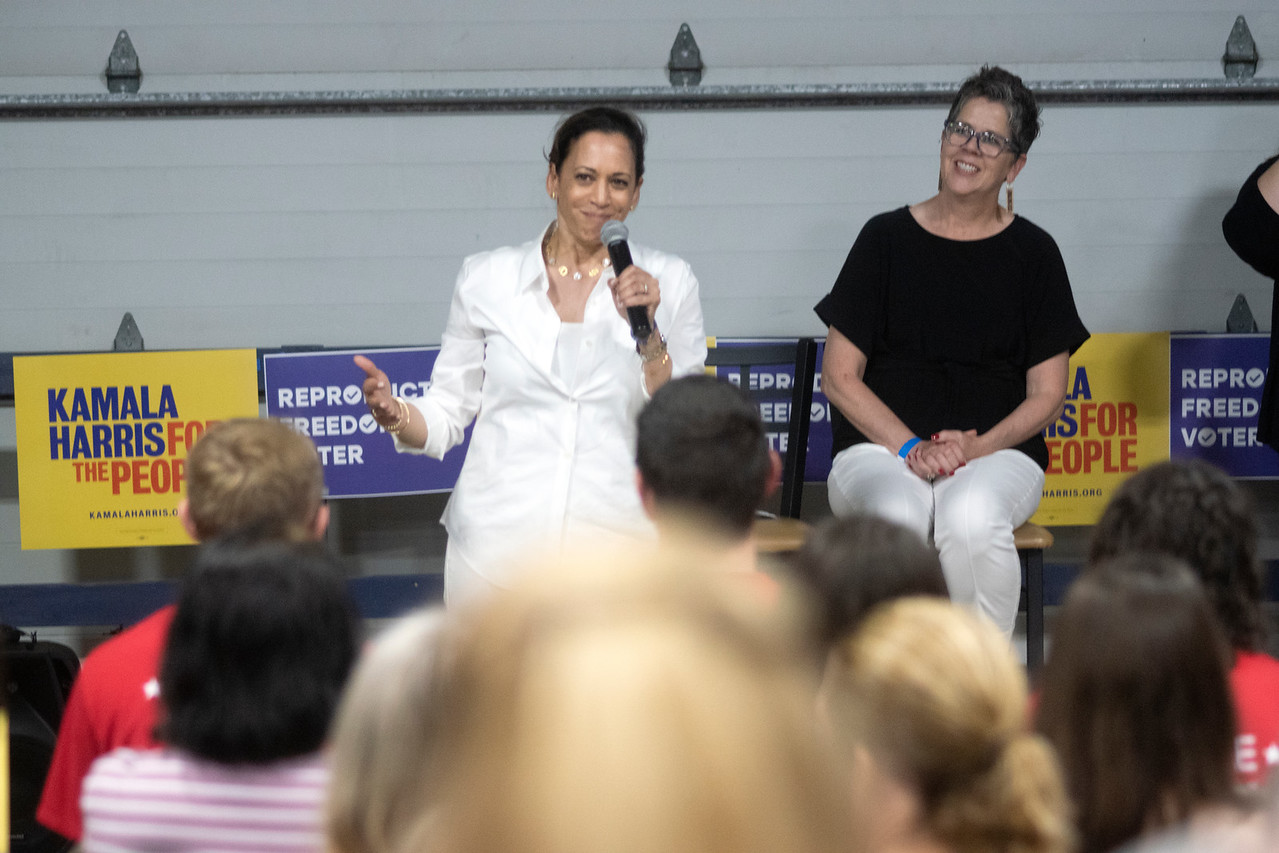 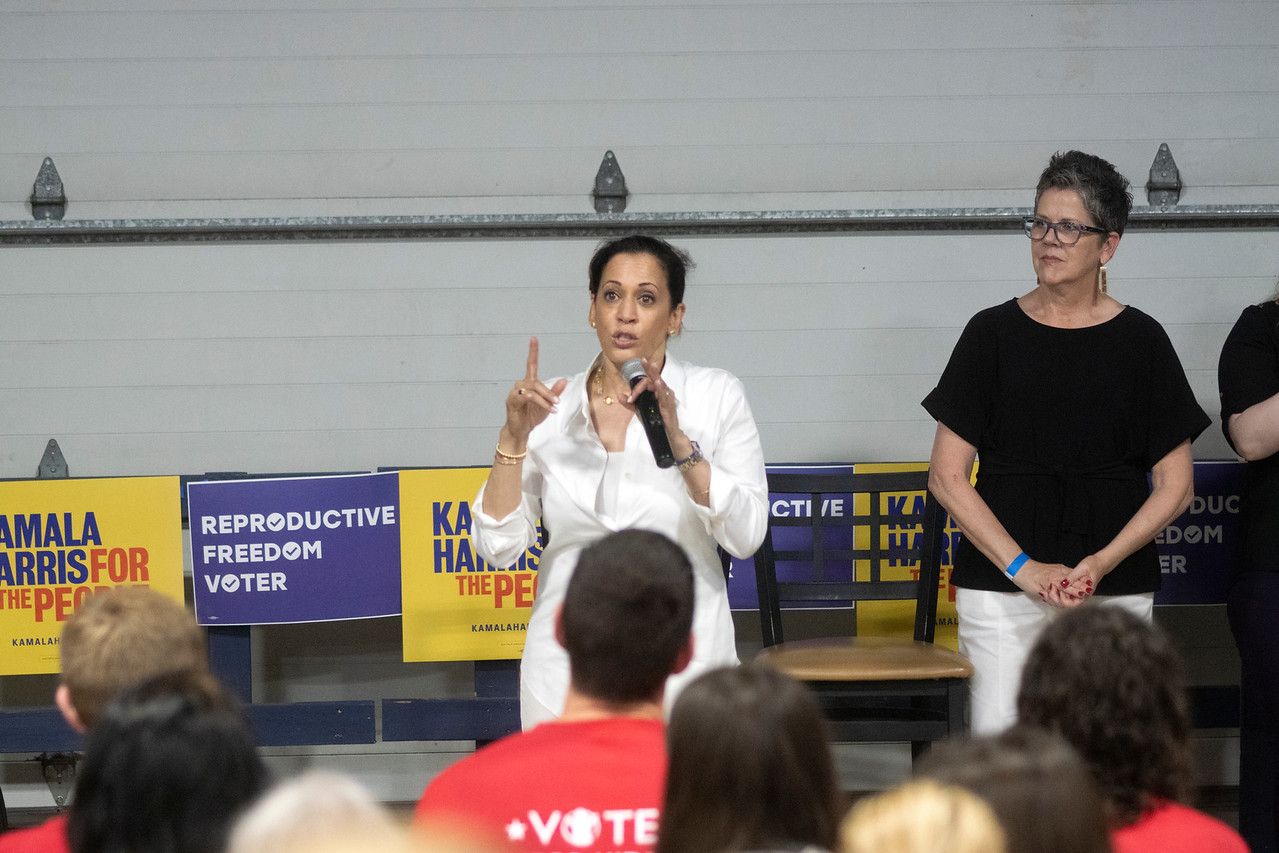 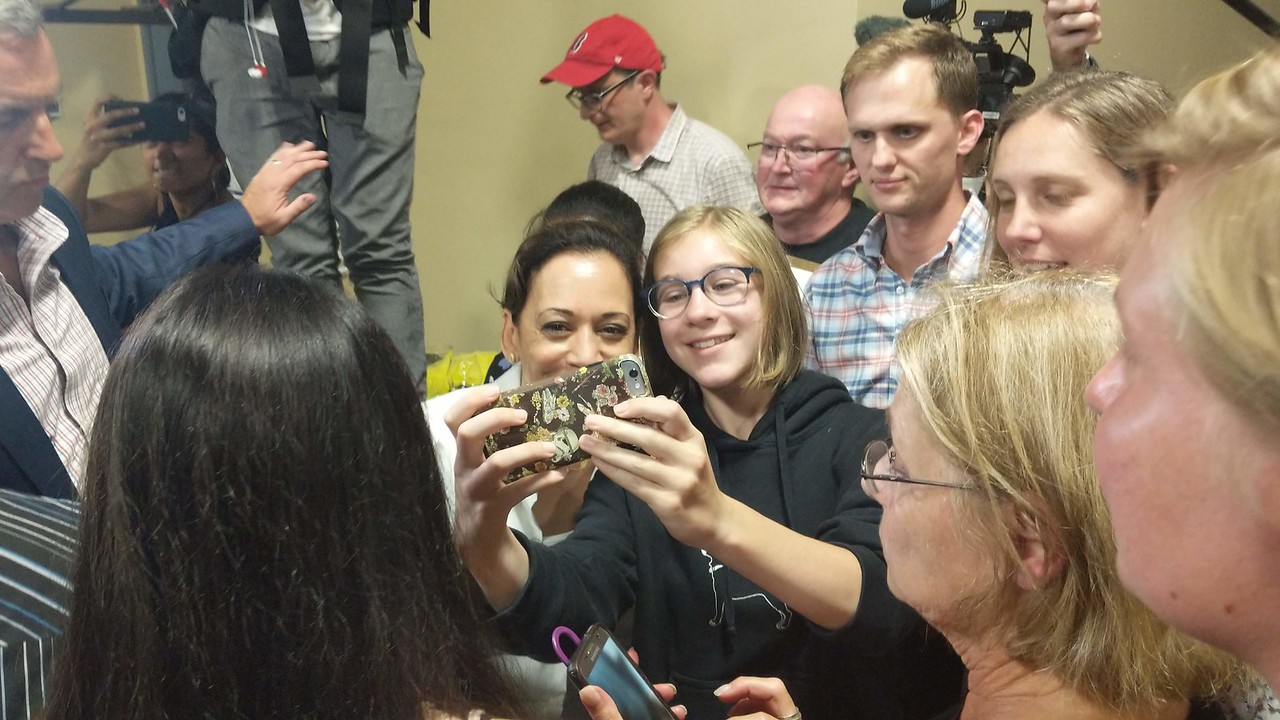 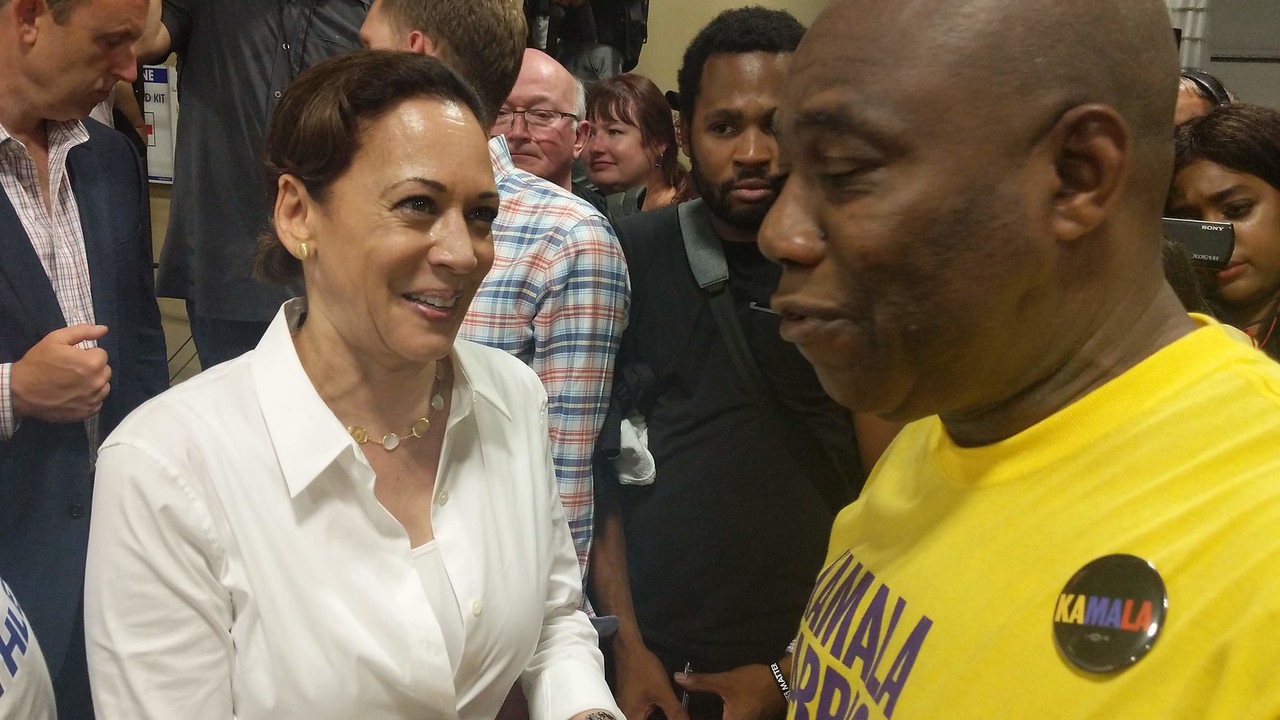 I didn’t get a selfie with Kamala. To do that, I would have had to shove several small children out of the way. I have a feeling this isn’t the last time I see Kamala speak though.