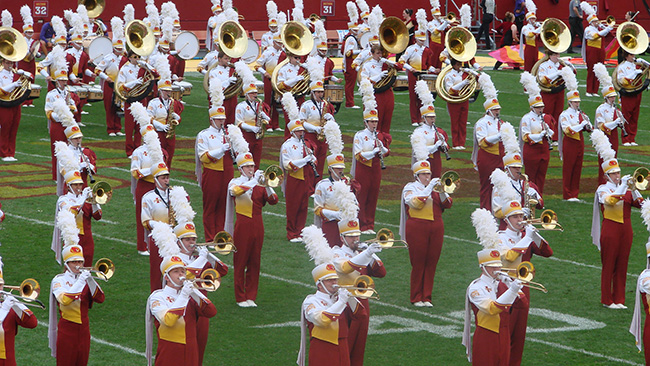 On Saturday, the Iowa State Cyclones opened their season by thrashing an upstart team from Cedar Falls. The referees tried valiantly to keep the Purple Hawks in the game by awarding them 2 touchdowns they didn’t earn. The first was an incomplete pass that UNI “recovered” and returned for a touchdown, which shocked everybody in the stadium because you can not recover an incomplete pass. Let alone return it. The Purple Hawks second “touchdown” was an incomplete pass that was the product of a helluva scramble by their midget quarterback and then “caught” with the aid of the ground in the endzone by the Purple Hawk running back. I’m guessing the refs just felt bad for the QB since he was running for his life and couldn’t even be aided by his running back to make a simple catch. So they just gave them the touchdown.

The referees’ efforts were in vain. The Cyclones prevailed in the third overtime when Sheldon Croney bowed into the endzone to end the game and send the Cyclone faithful home, well relieved more than anything else.

The good news is that the Cyclones have 2 weeks to figure out what the hades just happened and fix a bunch of mistakes that kept a game that wasn’t all that close on the field, close on the scoreboard.

I took an old “point and shoot” camera to the game that Logan had given me a few weeks back. I thought I’d take it to play with since nobody really cares all that much about the UNI game, including what appeared to be most of the Iowa State players.

I didn’t take many pictures because as I tinkered with it I determined that this camera isn’t right for taking pictures in this situation. Also, the game was a little too close for comfort and while I know full well that nothing I do in the stands effects the outcome of the game, I have noticed that every time I fiddle with a camera, Iowa State starts to suck it up.

So here are a few pictures of the band and cheerleaders and from tailgating. We did a dry run for Taco Tailgate, which is still tentatively scheduled for either the TCU or Oklahoma State game.

Derrick couldn’t go to the game because he “cares about his job” or some nonsense like that, so Brandon took his ticket.