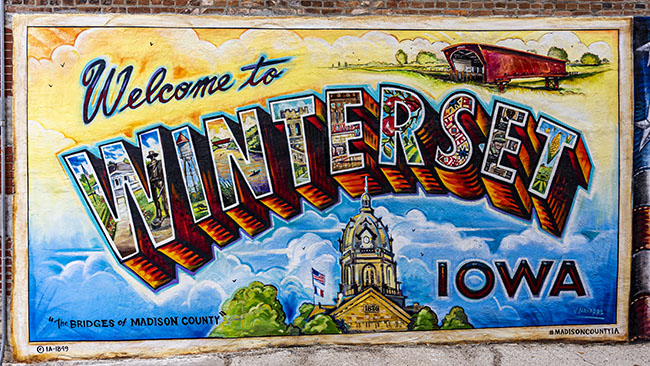 This is the first collection of other images I took while harvesting the town signs of Madison and Union County. This was the last one of these trips I took with my Mom. It also includes the last picture I ever took with her. It was at the John Wayne Museum, next to the John Wayne statue. She was a big fan of John Wayne movies. His westerns. She didn’t care for his war movies.

All of the pictures in this collection were taken in Madison County. Mostly in Winterset. A few were taken in Bevington and Patterson.

Note that there are two different dates here.

These two soldiers wrote their own names in this cement slab, which held a flagpole in the Salsbury front yard, with the inscription “Shot in France”, before they left for WWI.

The story is here, but it is hard to read from the condensation, but both soldiers were killed in France, during a gas attack. Salsbury is buried near Patterson and it is believed Downs is buried in Illinois.

The last picture I took of my Mom. There are probably 2 more collections of pictures from this trip left to share.

One thought on “Madison County and Union County Auxiliary Images – 1”