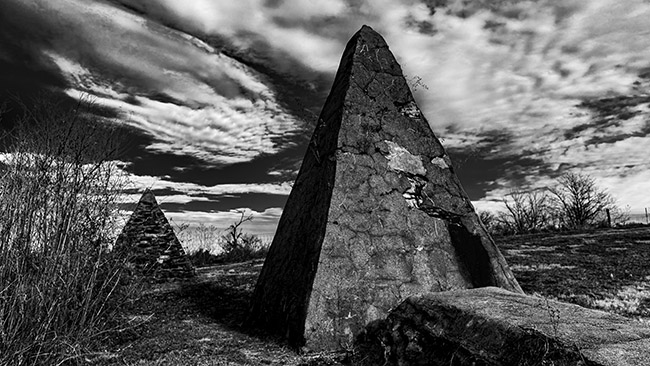 I promised you more information about the Great Pyramids of Iowa. Here is information from a Des Moines Register article titled: “Pyramids? Haunted angels? These are 6 of Iowa’s oddest graveyards to visit before you die.:

Three small Egyptian-style pyramids at the back of Hickory Grove Cemetery near Avery are the lone remnant of one man’s unrealized dream to be entombed inside one.

According to local records, their construction was commissioned in 1939 by newspaper publisher Axel Peterson, when he was 70 years old. Peterson’s plan was that, when he died, he and his friend, Anton Heymooler, would be placed inside, seated and facing each other with his printing press between them.

The pyramids were built, but neither Peterson nor Heymooler were buried inside. Peterson died at age 78 and was instead buried in nearby Cuba Cemetery. But the pyramids remain at Hickory Grove to this day.

Here are the rest of the pictures from this trip: The next time we hit the open road to look at auxiliary images from THE TOWN SIGN PROJECT, we will hit Clinton County.