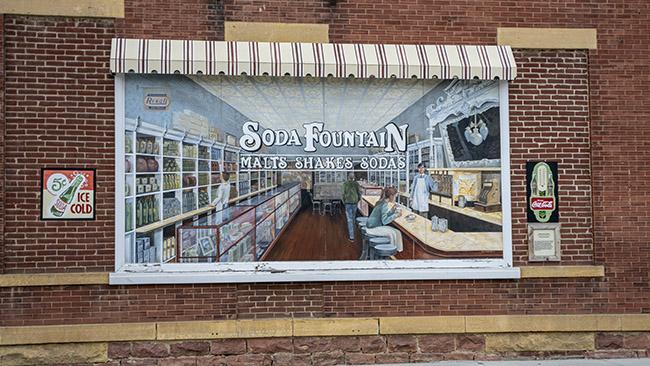 Time for the final collection of auxiliary images I took while harvesting the town signs of Osceola County. This trip was cut short in Lyon County while harvesting their town signs due to inclement weather. So many of the signs in this collection were taken in Lyon County and a few were taken in Clay County. I believe this is also the trip where I hit a pheasant. People think I hate cats. They are worthless, yes, but I don’t hate them. Pheasants, I hate. They are probably, truly, the only animal in the world I actually hate. Unless you count the failed species known as humans. But I even like some humans. Pheasants, don’t like a single one. Melvin – I’ve stared at the mural for a bit. I can’t figure it out.

I love the murals in Rock Rapids. I would rank it as a Top 3 town in Iowa for murals. It is up there with Creston and Le Mars, I haven’t shared the Le Mars murals yet. I went back through Rock Rapids at a later date and photographed their murals again.

In fact, the next time we hit the open road to share some auxiliary images, we will share images from Clay and Lyon County.